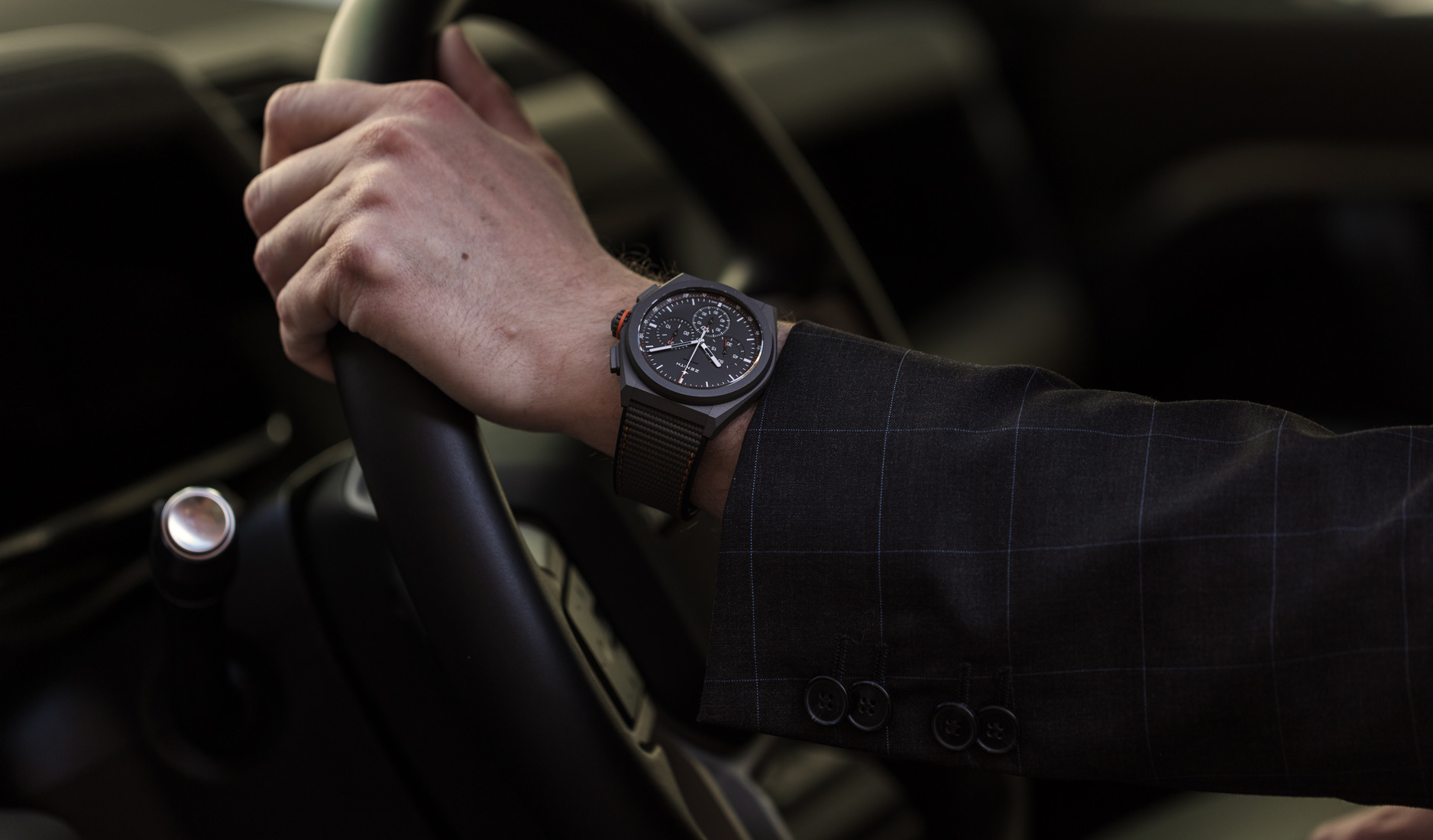 Quite often, watch and carmaker collaborations have the tendency to turn out pretty meh, despite the best efforts of the marketing teams from both quarters trying to sell you the ‘shared spirit’ rhetoric. Instead of a bona fide joint-creation that marries the best of both worlds, what you are likely to end up with is a watch that sits awkwardly in the middle, slapped with the car’s familiar colours and the obligatory logos of both companies on the dial, rousing the interest of only the companies’ most faithful fans. The new Zenith Defy 21 Land Rover Edition isn’t immune to the aforementioned sales pitch (‘When two partners who are pioneers in their respective fields come together…’ announces its press communique with expected pomp). However, having encountered the watch BEFORE hearing its backstory, the first impression we had of the Zenith Defy Land Rover Edition was that it was simply one heck of a handsome sports chronograph, which seems commercially on-point.

Not that the basis for the watch’s conception is any less significant. The Zenith Defy 21 Land Rover Edition, which is limited to 250 pieces, is created to commemorate the launch of the new-generation Land Rover Defender (below), which will be rolled out sometime in 2020. For the record, this is Zenith’s second collaboration with Land Rover, the first being the El Primero Range Rover Special Edition from 2016. 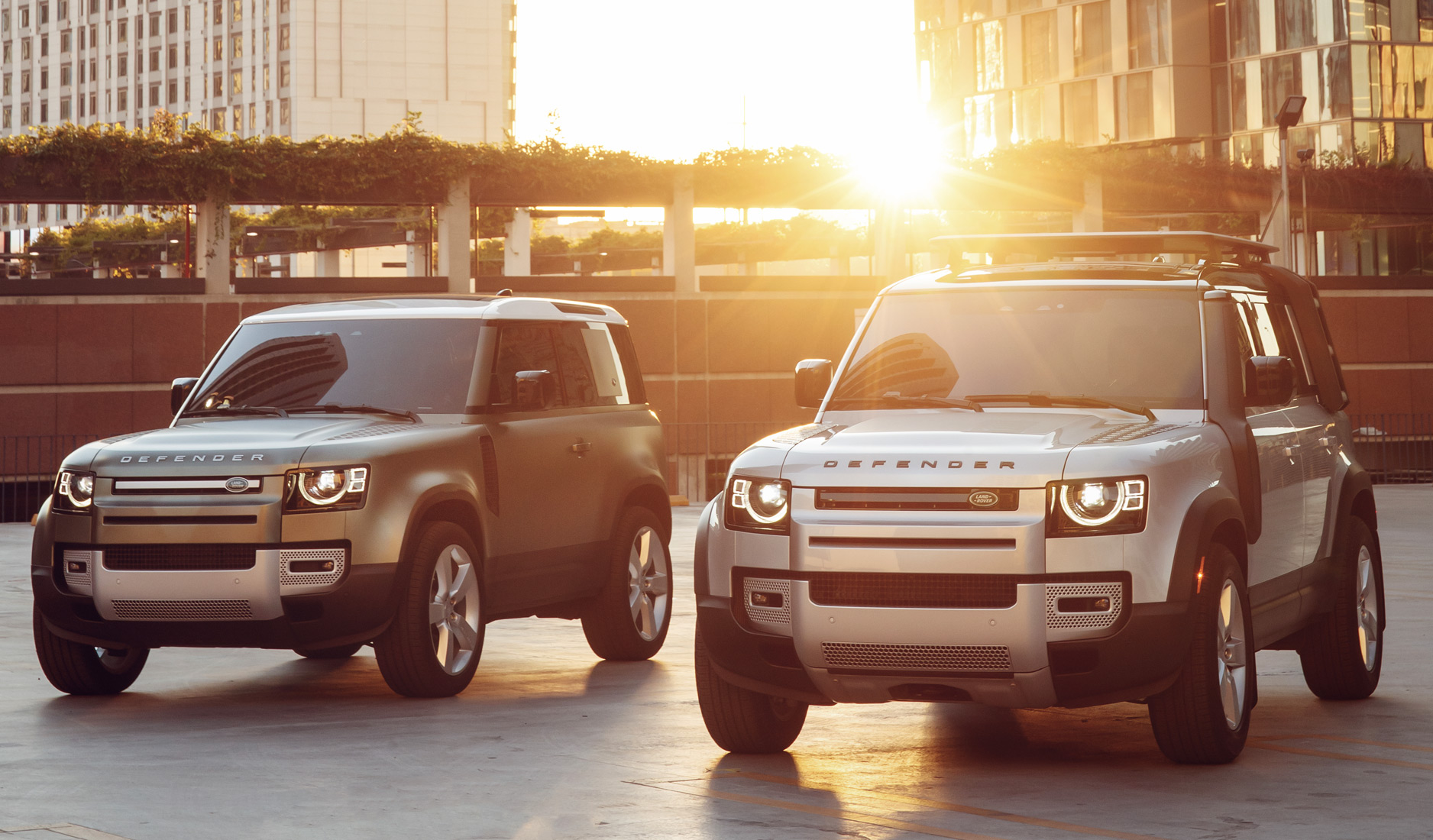 But back to the new watch. Even without the slightest knowledge of the cultish legacy of the Land Rover Defender, we were able to appreciate the watch for its unique presence. Sheathed in in grey with hints of orange on the second markers, crown band, and tip of the central chronograph hand, the Zenith Defy Land Rover Edition has a knack for grabbing attention without being ostentatious. 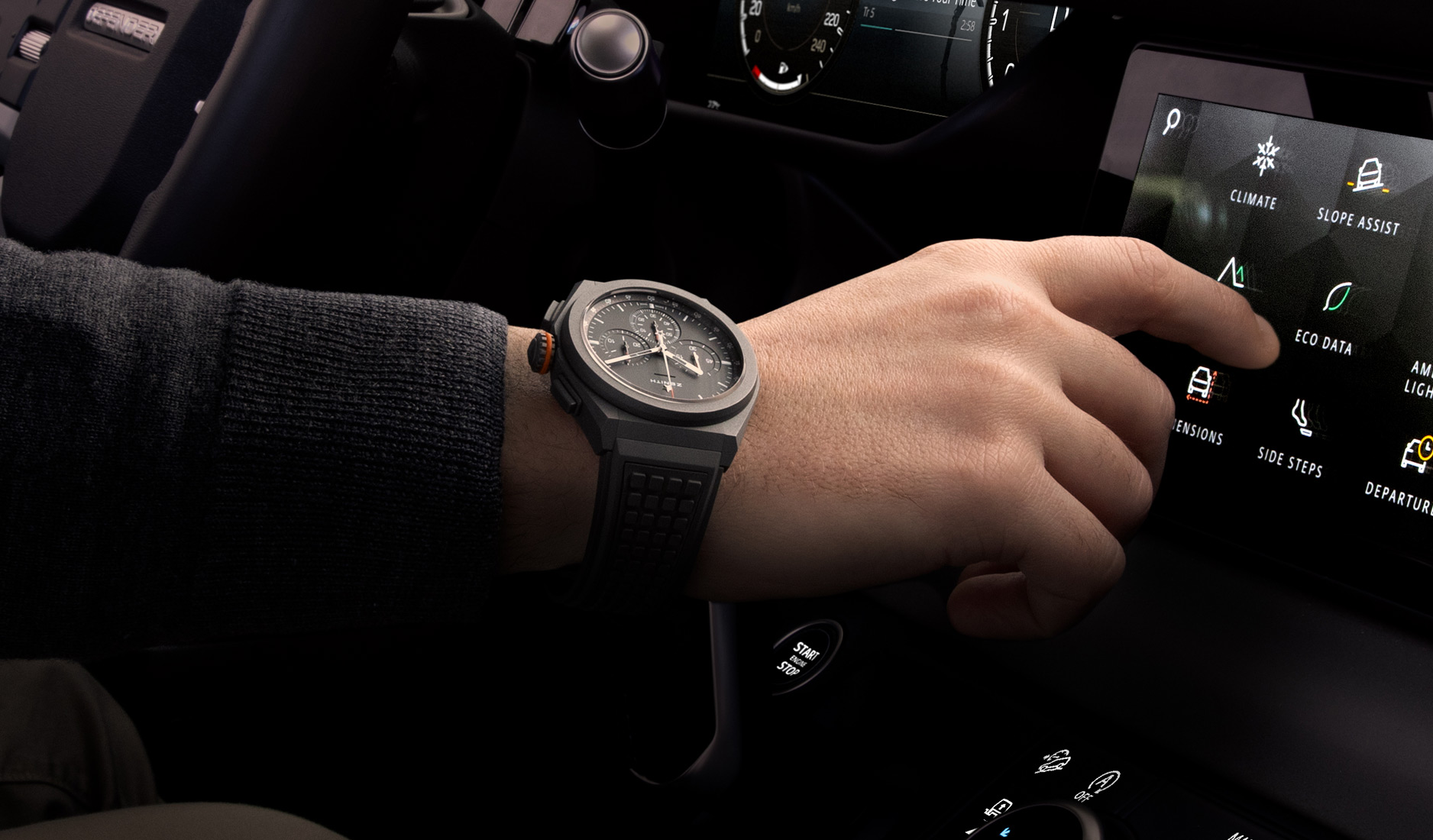 The monochromatic aesthetic plays a huge part, as does the matte finish on its 44mm case, which made of micro-blasted titanium. The folks at Zenith say that the finish helps ‘absorb light from all angles to better accentuate its faceted surfaces’. Well it might be so, but to the untrained eye, the case simply looks effortlessly and nonchalantly cool; like that sexy introvert who just cannot help getting ogled at no matter how hard he tries to hide. 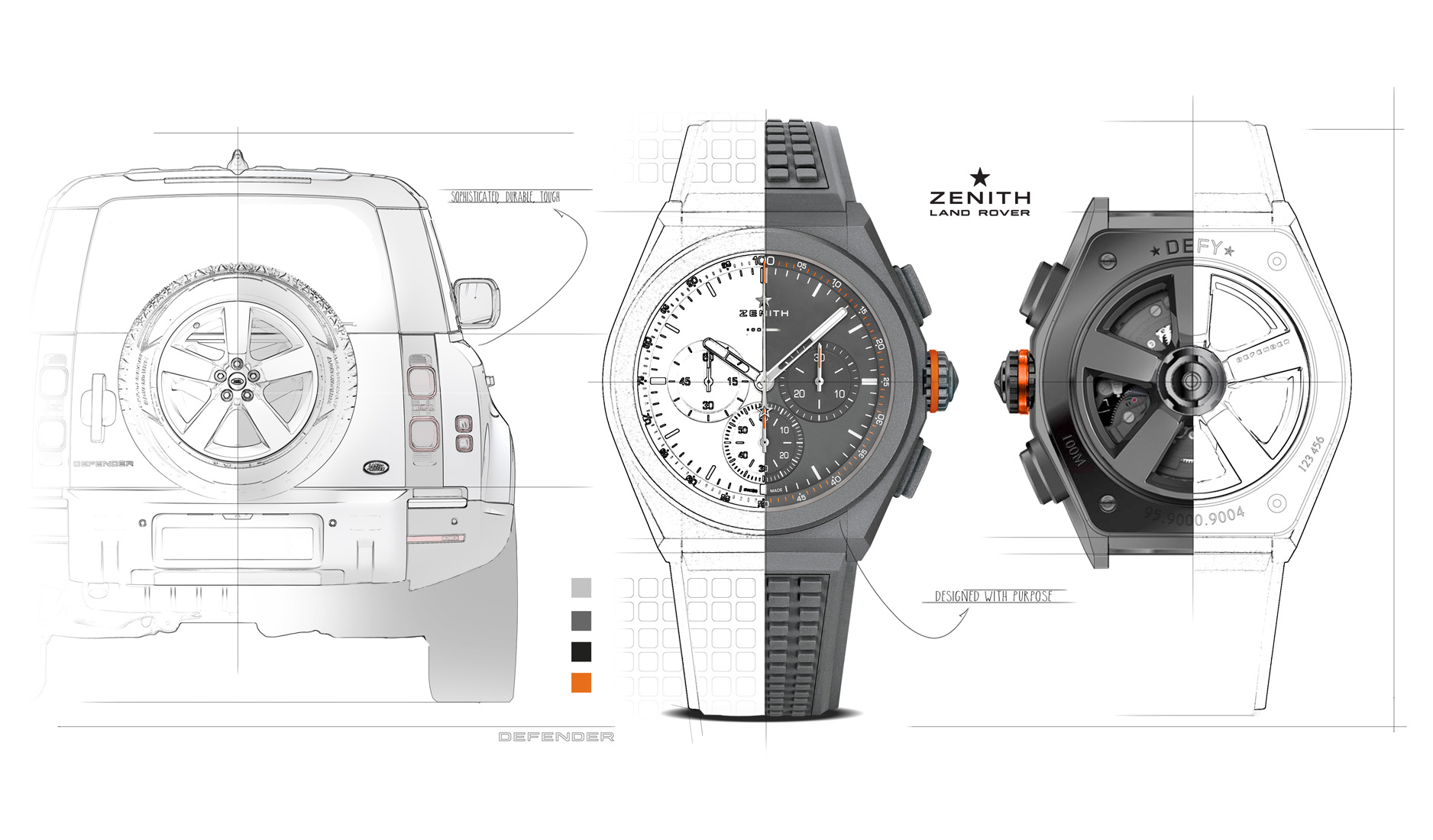 The tri-compax chronograph layout for the Defy 21 remains unchanged for the Land Rover Edition with 30-minute and 60-minute totalisers at three and six o’clock, respectively; small seconds counter at nine o’clock, and a central chronograph hand to measure elapsed time to 1/1000th second. Being a Defy 21, the watch is powered by the automatic El Primero 9004 chronograph movement known for having with two escapements: one that beats at 36,000 vph for the regular timekeeping, and another at 360,000 vph for the chronograph function. What’s interesting, though, is a new linear power reserve display at 12 o’clock, right under the Zenith logo. It is the first time that a Defy 21 timepiece comes with a linear power reserve indicator. 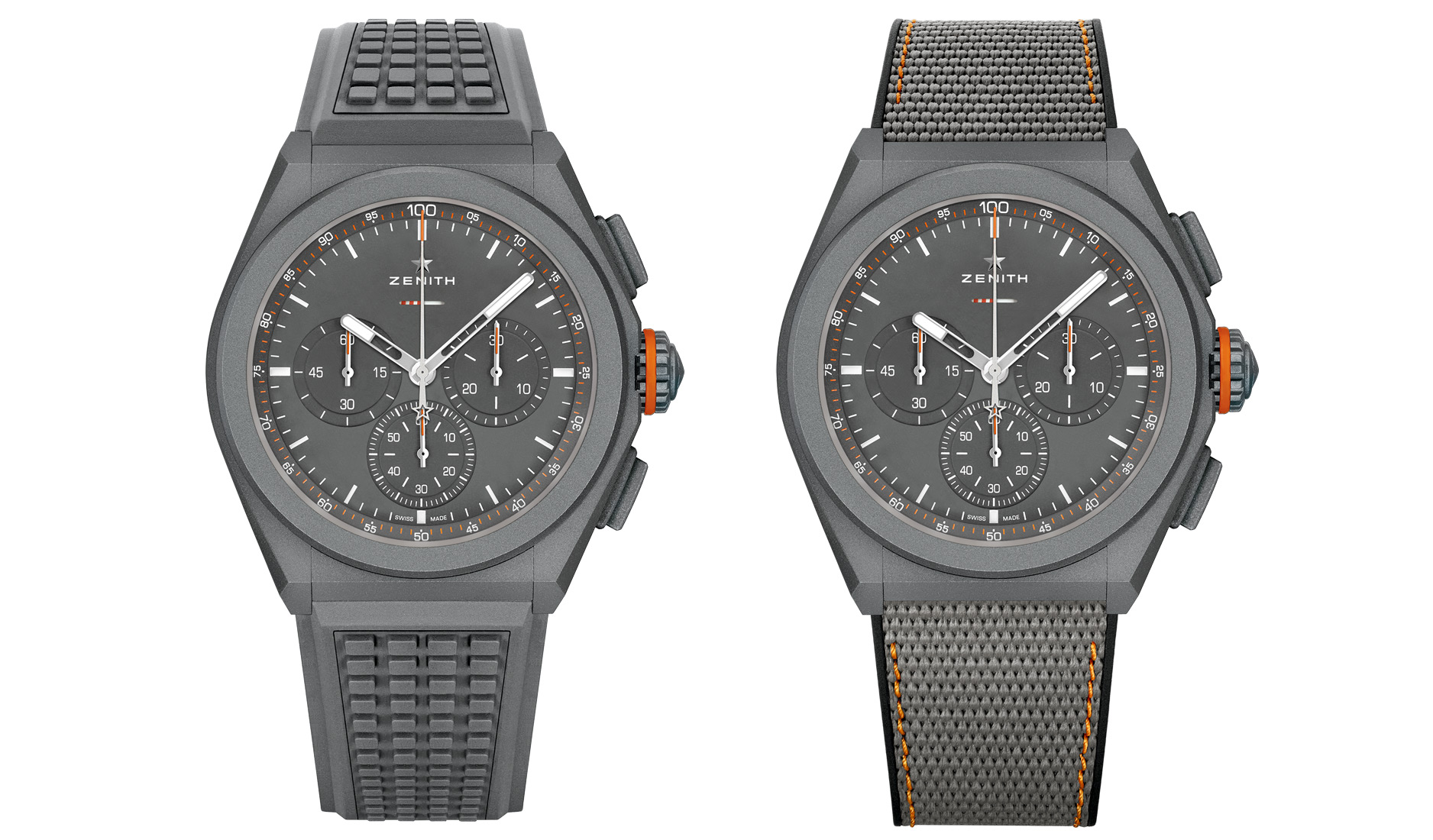 The watch’s nods to the Land Rover partnership can be seen on the caseback – the rotor that resembles the rim of the new Land Rover Defender, and the ‘Land Rover’ name etched at the bottom of the case. Those aside, the Zenith Defy 21 Land Rover Edition pretty much stays away from the cookie-cutter, logo-and-colours means of creating a car-inspired timepiece. Instead, without being too shout-y about it, the Zenith Defy 21 Land Rover Edition eloquently expresses the ride’s unassuming machismo and rugged spirit in a way that even Land Rover noobs like us can appreciate.