There’s a new horological star in town and its name is Cartier. For the last few years now, the luxury Maison has been winning fans over with its utterly creative yet perfectly wearable tickers that run the gamut from gateway pieces priced in the mid-to-high thousands, to breathtaking Privé, Libre and high jewellery watches that will set you back a pretty penny.

But this is what I appreciate about Cartier—they’re not just content with releasing new dial colours or adding diamonds to existing creations. There is a very respectable amount of innovation and creativity involved in each of their new timepieces and they knock it out of the park every single time. Add to that incredible marketing savvy and you have a winning formula. 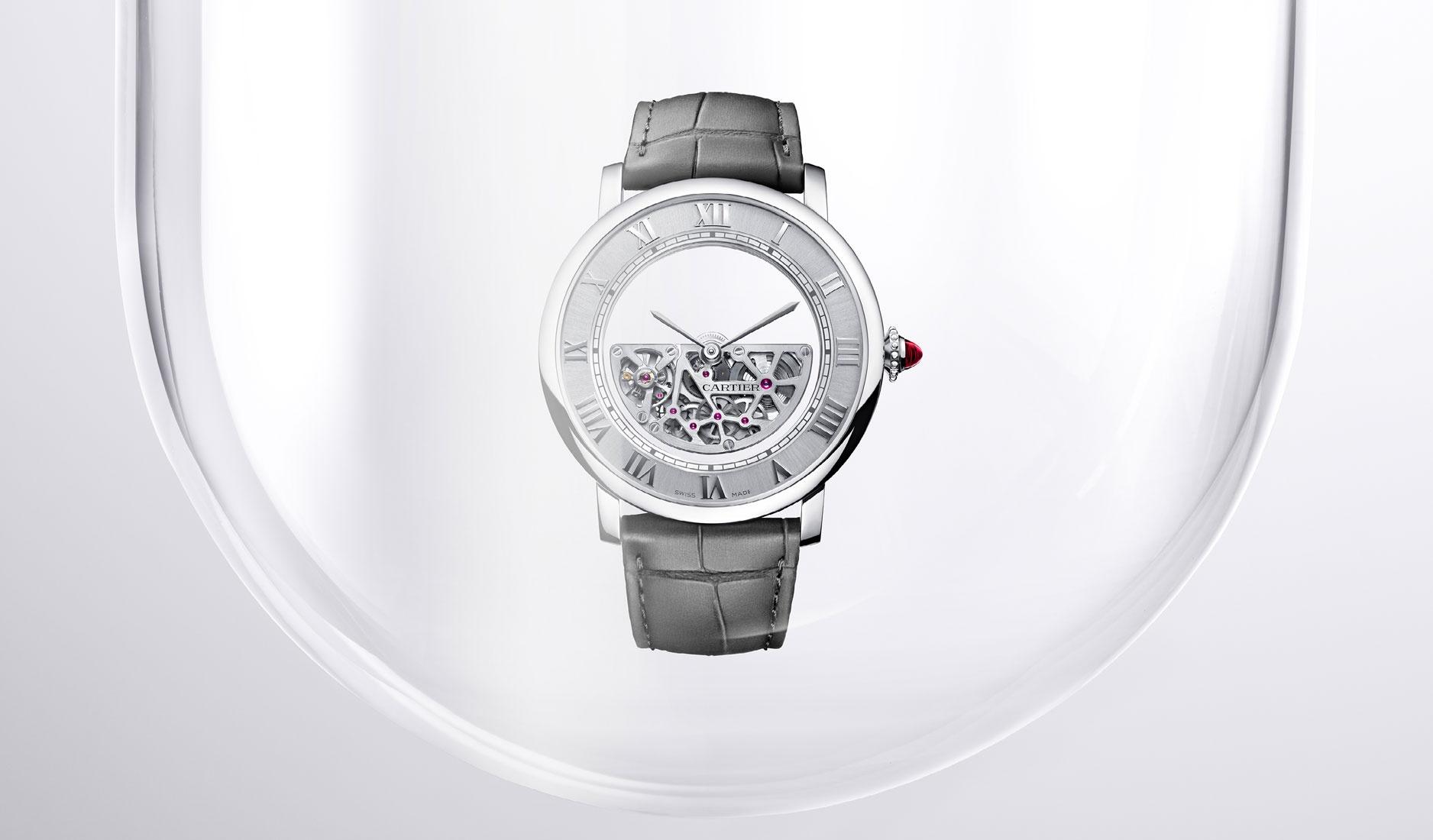 Take the new Masse Mystérieuse. Launched as part of Cartier’s fine watchmaking collection, the Masse Mystérieuse (‘mysterious rotor’ in English) leverages its history and know-how in mysterious clocks (which they’ve been producing since 1912). Using the Calibre 9801, a brand new in-house movement with 175 components that took nearly eight years to create, the watch combines Cartier’s know-how in mysterious displays and skeletonisation. Available in three limited edition models, the Masse Mystérieuse comes in a special box with cufflinks and a travel pouch. 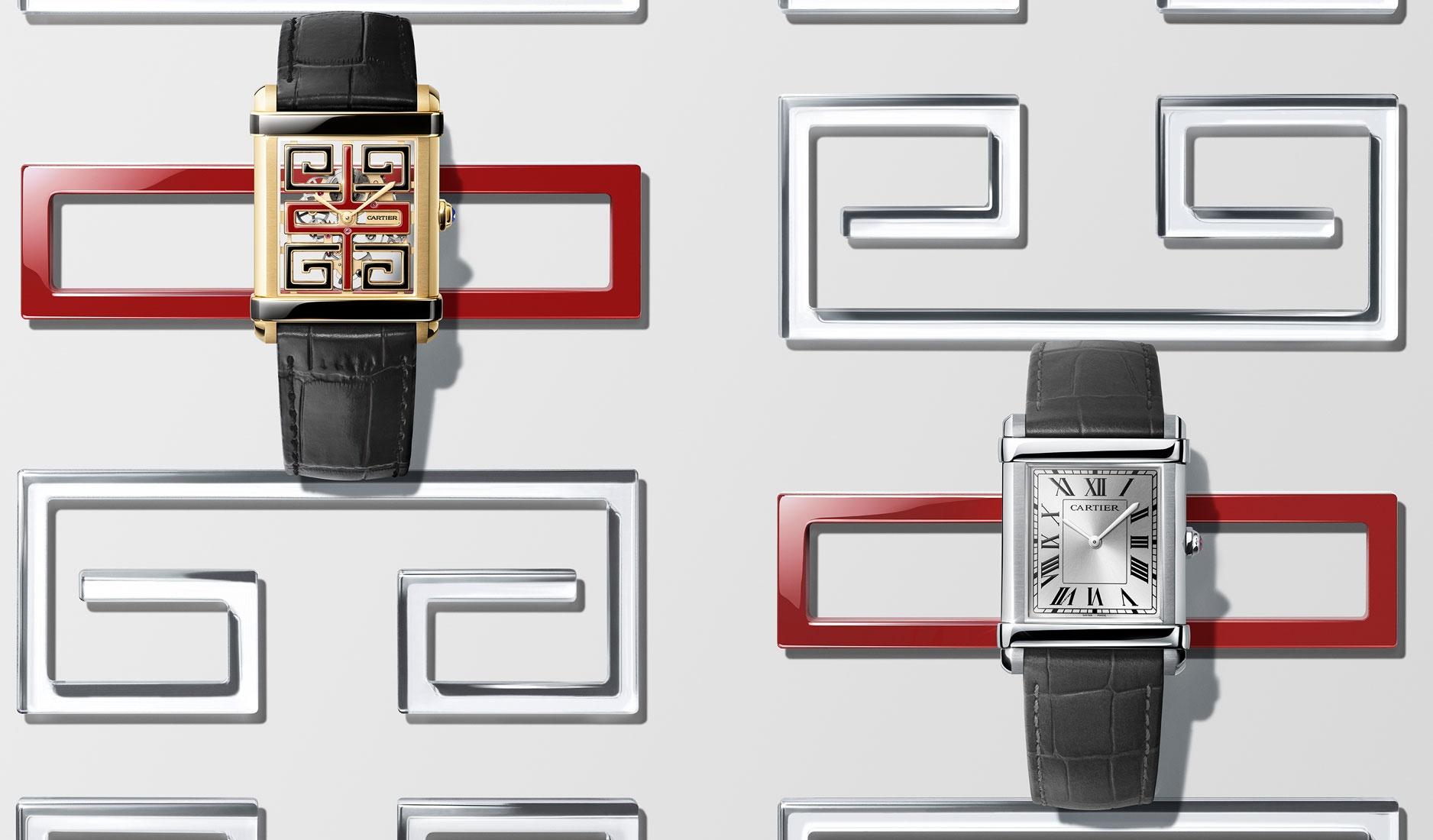 This year, the Maison also celebrates the 100th anniversary of its beloved Tank Chinoise. With overlapping brancards inspired by the porticos of Asian temples, the Tank Chinoise has been reinterpreted in a more contemporary way. Making its debut this year in the Cartier Privé collection, the watches now feature slightly more rectangular cases compared to the square versions of the past.

Two new models are offered, with the more 'basic' two-hand version in platinum, yellow gold or rose gold, driven by the Calibre 430 MC. Each is numbered and limited to 150 pieces. The more elaborate version features a skeleton movement, the Calibre 9627, developed in-house especially for this model. Black and red lacquer embellish the movement reference traditional Chinese windows for a very classy take on this icon. Available in three numbered and limited editions. 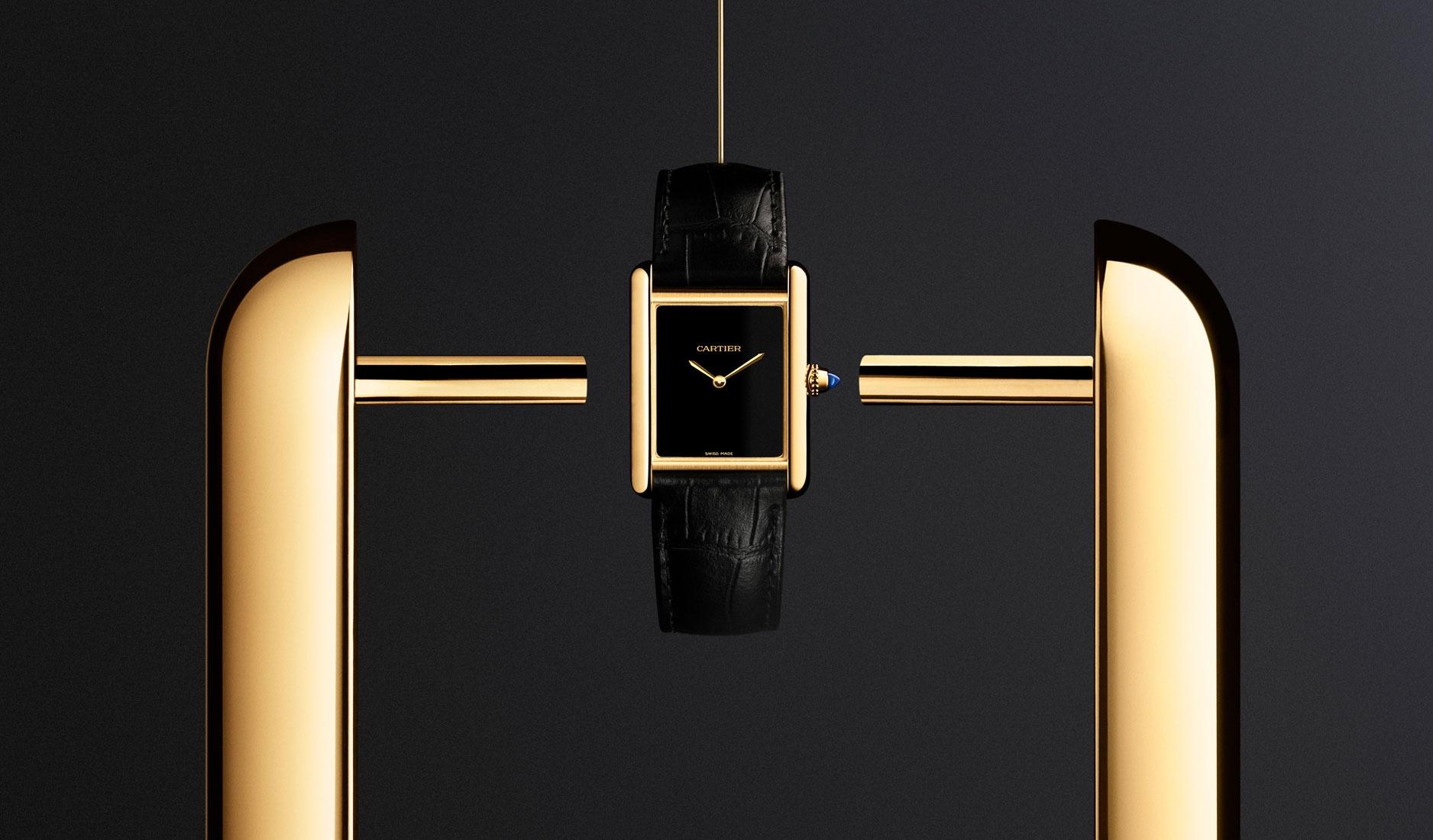 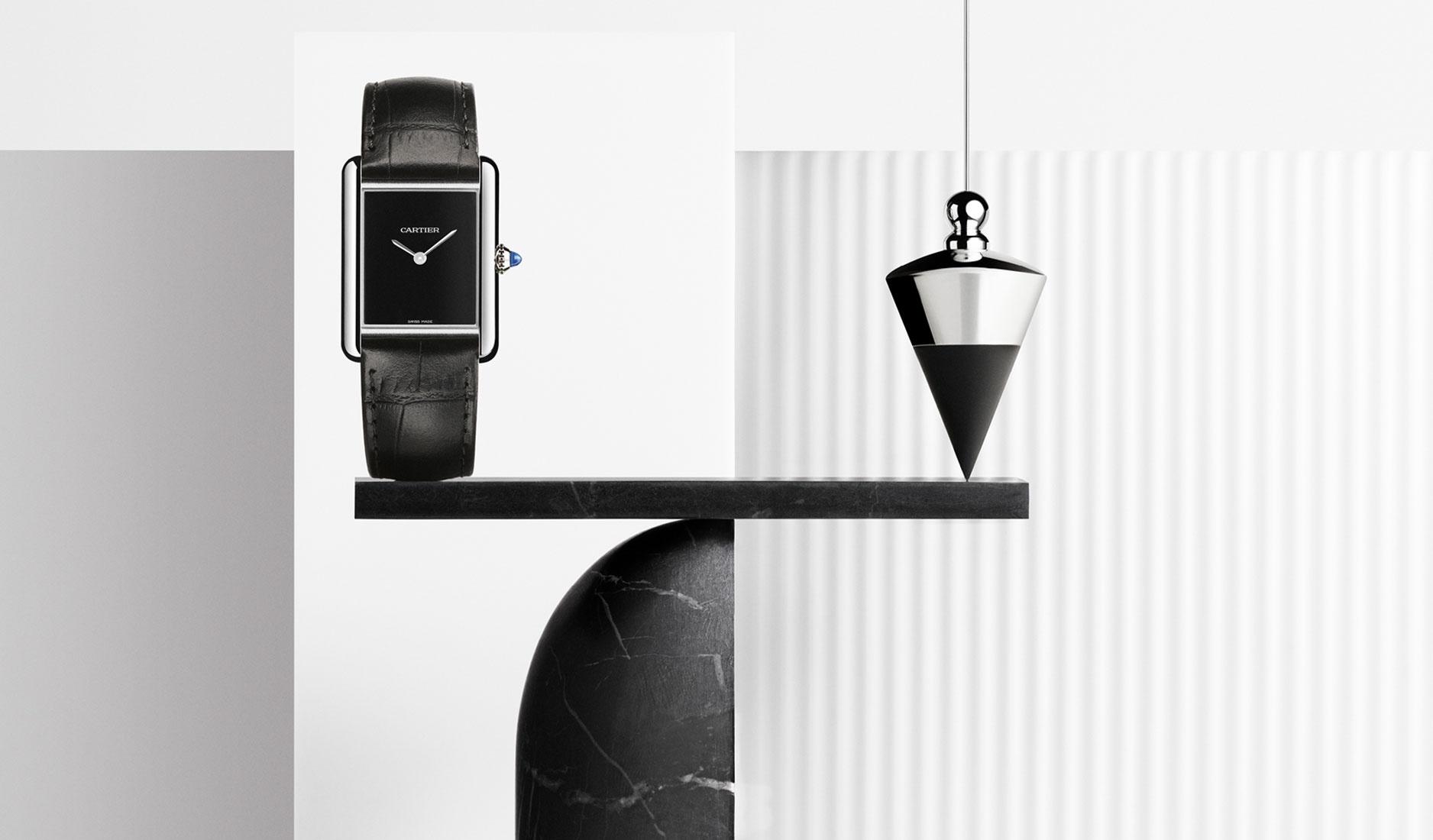 The Tank Must and Tank Louis Cartier return with a very sexy black dial as well as two new dial animations in red and anthracite grey. Like last year’s immensely successful Tank Must launch, we’d be surprised if there wasn’t a waiting list for these. The black and steel Tank Must comes in quartz while the black and yellow gold Tank Louis Cartier runs on the manual-winding Calibre 1917 MC—the same as existing models. Finally, with the Coussin de Cartier—an elegant evening watch—a completely new shape has been born. Essentially a square with rounded corners, various versions explore a new triangular setting, which allows the diamonds to be integrated into the case seamlessly. But the most spectacular version has to be the two limited editions with a supple case that is flexible to the touch. Using a grid pattern of intertwined gold links, the watch is completely paved with diamonds in one model, and emeralds, tourmalines, tsavorites and sapphires in the other model. On a sensory level, the Coussin de Cartier is simply spectacular. 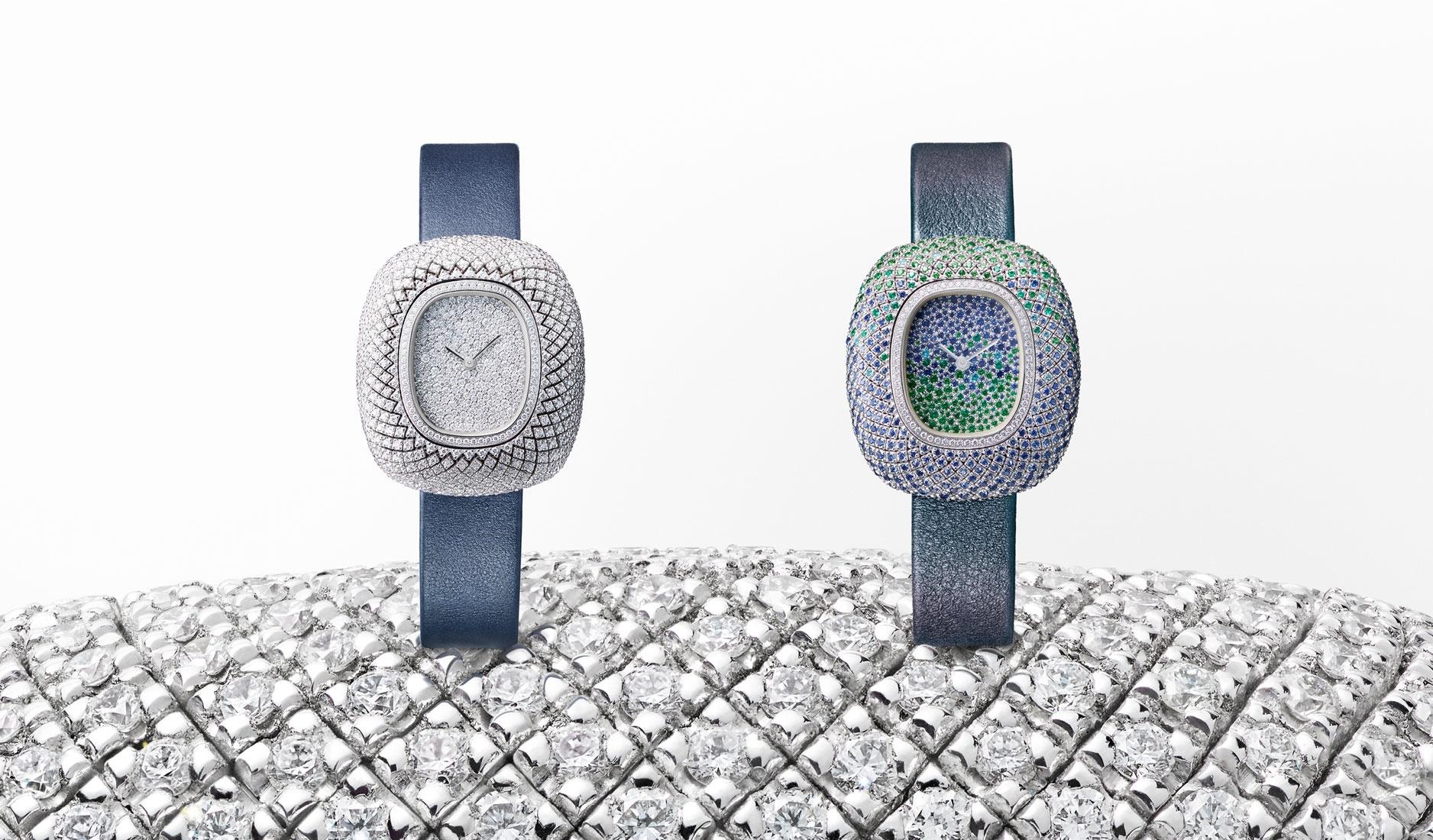