People who are encounter Urwerk’s watches for the first time inadvertently react in a familiar pattern. First, shock and awe. Followed either by extreme confusion, or an Eureka moment, as they wade into the world of avant-garde horology. Whether they like the watches or not, there’s no unseeing how far-out mechanical watchmaking can be.

As bona fide disruptors of modern watchmaking, co-founders of Urwerk, third-generation watchmaker, Felix Baumgartner, and watch designer, Martin Frei, delight in making us think about time, as much as they challenge us with new ways to tell the time. And they’ve made it a mission since the brand’s conception in 1997, with sci-fi looking timepieces that eschew typical hour and minute hands, for a unique rotary satellite display system that employs anything from rotating cubes and telescopic hands to display the time.

Over the years, Urwerk has evolved the system – one that was actually inspired by a 17th-century night clock built by the Campanus brothers that featured a rotating hour disc, which rises and sets in an arc - to embrace even more complex features and concepts. 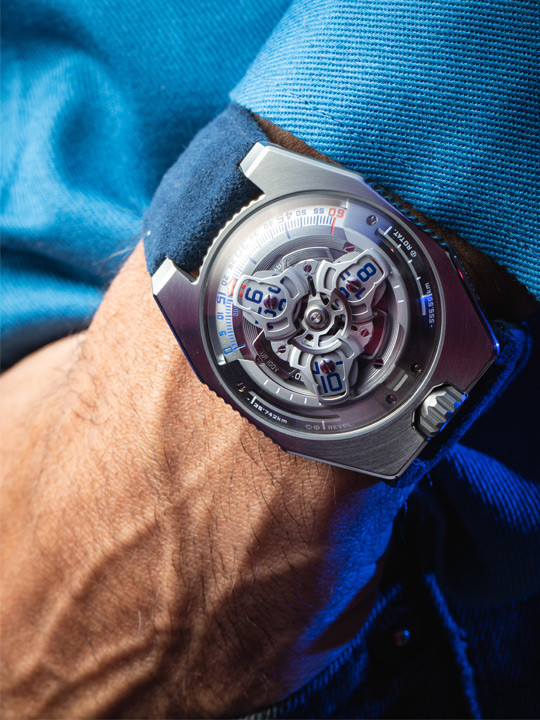 In 2019, the brand launched the UR-100, which measures both time and space – charting how far the wearer have traversed across Earth and, accordingly, how far Earth has moved around the Sun.

The watch boasts a newly developed carousel that displays the hours, along with three arrow hands at the bottom of the dial, which rotate and take turns to mark the minutes, the distance travelled around the equator in 20 minutes (Earth’s rotation), and the distance Earth travels around the Sun in 20 minutes (Earth’s revolution). A metal arc across the top half of the watch bears markings on the left and right to denote rotation and revolution distances respectively.

It’s a mind-blowing creation that is as technically inventive as it is philosophical. This year, Urwerk adds metallic chic to the list of winsome attributes with the new UR-100 V Iron, limited to 25 pieces.

A stripped-back version of the UR-100, currently available in stainless steel, gunmetal or PVD-coated titanium, the UR-100 V Iron is clad in steel and titanium. The monochromatic sheen of the case and movement components are judicious accented with red, white and blue hands and markers, which lend the watch its ice-cool appearance. And it’s not just that the UR-100 V Iron looks incredibly stylish and mechanically astute. The watch’s sharp and sophisticated presentation is also testament to Urwerk’s mastery of design and craft. The case’s multi-facetted angles with polished and matte finishes, the openworked movement with components like sanded and shot-blasted aluminium hours display, and satellites that rest on a carousel of sanded brass plated in ruthenium are all fastidiously hand-finished within Urwerk’s own workshop.

Last but not least, the UR-100 series will be especially enticing for collectors who have followed Urwerk since its beginning, as it references designs of the brand’s earlier watches, namely the UR-101 and UR-102.

“We have adopted some of the stylistic features of our first constructions, and then deconstructed them. For example, the steel dome of our early models is now in transparent sapphire crystal. The hard outlines of the titanium and steel case highlight its perfection. Because I’m always at odds with the dictates of symmetry, I have used different proportions to catch the eye,” explains Frei. With all due respect, it’s not just our eyes, but our minds, too. 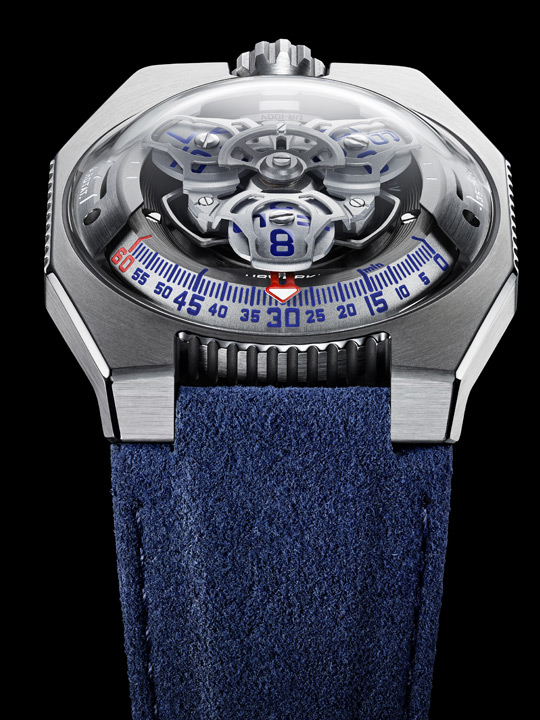