Because two metals are better than one.

Ok let’s stay focused. We know you are channeling your inner Beckham right now, wondering how that Tudor would look with your office shirt and your ink-free wrist. Take it from us: with the new Heritage Black Bay S&G, it is the watch that maketh the man, not the other way round.

When the Heritage Black Bay was introduced in 2012 – an award-winning collection that instantly supercharged Tudor’s coolness in one fell swoop – the aesthetics were largely anchored on a vintage-y look. Design accents reference past Tudor models, from its case profile and gilded plus-sized crown engraved with the brand’s rose logo that recall that old Tudor Submariner from the 1950s, to the snowflake hands that appeared in the same dive collection in the 1960s.

Most of all, the previous Heritage Bay Black watches' throwback style proved to be so popular, they quickly dominated Tudor’s catalogue, as the brand marched out versions in various coloured bezels and case materials, all riffing on the same nostalgic vibe that helped define the collection. 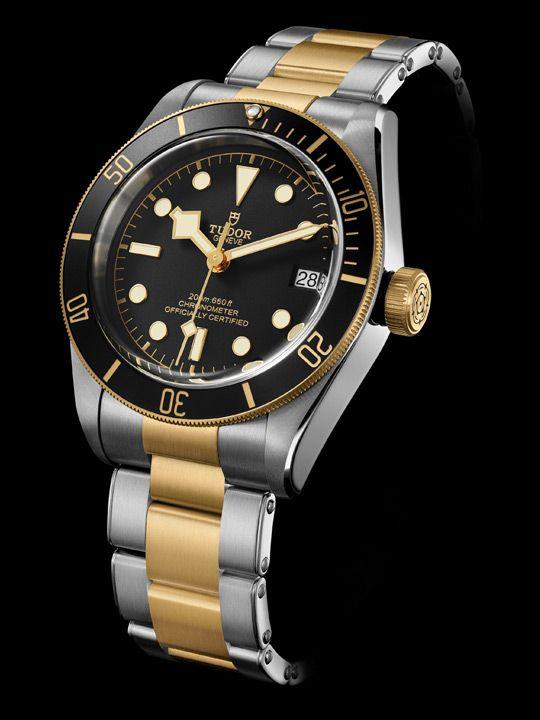 Until the Heritage Black Bay S&G, that is. Substituting its predecessors’ tool-watch-style appeal with an unapologetically regal attitude, the watch isn’t so much about taking things up several notches, as it is taking a detour into the realm of sporty luxe. On the wrist, the Heritage Black Bay S&G feels just as it looks – weighty and expensive with just the right amount of snootiness.

On the inside, the Heritage Black Bay S&G houses a similar movement to the one featured in last year’s Black Bay collection – the MT5612 (below), an upgrade of the previous year’s MT5602 and also used in the Pelagos. Like the earlier movement, the MT5612 is COSC-certified, and boasts silicon balance spring and 70-hour power reserve. The key difference is the addition of an instantaneous date display with rapid adjustment.

Easily the most baller of the Heritage Black Bay watches, this steel-and-yellow gold version rocks like how bi-metallic timepieces do – with a generous dose of retro-style ostentation. It is that ‘uncle swag’, re-modelled for a new generation, and served with equal parts irony, style, and substance.