The first chronograph in Tudor’s Black Bay family is born. 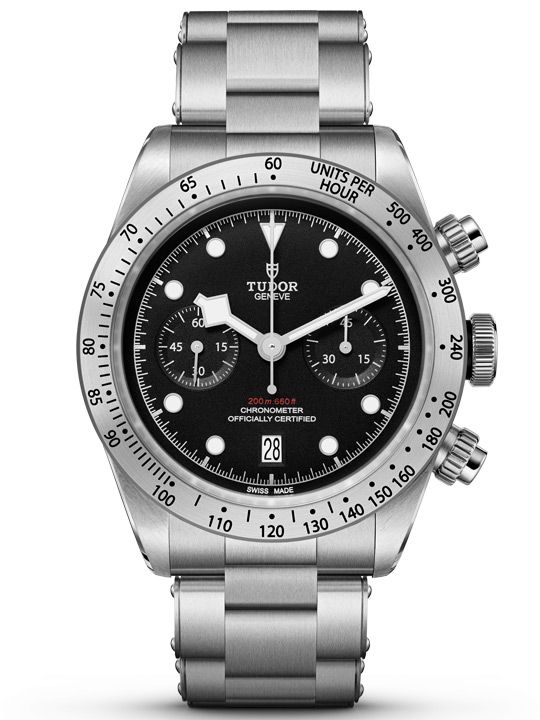 Seeing as Tudor has been on a winning streak with its Black Bay offerings in recent years, we were looking forward to its slew of releases at this year’s Baselworld fair. Prior to the launch, however, there were already murmurings of a new chronograph that would augment the Black Bay family even further. Suffice to say, the Heritage Black Bay Chrono was Tudor’s most talked-about watch at the fair. And for good reason, too.

The Black Bay series forms part of Tudor’s dive watch collection, which it has been producing for over six decades. With the addition of a chronograph into its diving range, Tudor is essentially instilling their aquatic heritage with motor racing DNA. While it’s a first for the Black Bay family, this isn’t Tudor’s first chronograph. In fact, the brand has been making them since 1970 with its maiden manual-winding Oysterdate chronograph that won fans over with its bright colours and iconic pentagonal hour markers.

With the new Black Bay Chrono, design elements of the Black Bay are integrated into the watch, replacing the pentagonal hour markers with the Black Bay’s signature dot markers and snowflake hands. Other references to the Black Bay collection includes the domed dial and crystal (inherited from the first Tudor dive watches), along with a prominent winding crown. The hands have also been slimmed down to accommodate the addition of two chronograph counters and allow for more space on the dial.

But perhaps the most intriguing feature of the new chrono is the 30.4mm COSC-certified calibre MT5813 (above)—a creative collaboration between Breitling and Tudor. Based on the former’s acclaimed B01 chronograph calibre with modified chronograph registers and regulator changes, the MT5813 has been tweaked to include Tudor’s regulating organ and oscillating mass fashioned from a tungsten monobloc. A column wheel and vertical clutch ensure smooth and precise activation of the chronograph function while aesthetic touches include Tudor’s own finishing. A bi-directional oscillating weight delivers approximately 70 hours of power reserve. As part of the collaboration with Breitling, Tudor has also supplied their in-house calibre MT5612, used in the Black Bay series, to power Breitling’s Superocean Heritage II 60th anniversary edition (read more about it here)

Style-wise, the watch proffers a sporty vibe with a steel bracelet that sits on the ‘safe’ front; it’s both masculine and versatile with no big surprises—basically how a very respectable chronograph ought to look. The leather strap option, though, gets us more excited. The slightly distressed look of the strap gives the watch an edgier feel and lends it loads of personality, which perfectly complements the souped up movement inside. Whichever option you choose, you get an additional denim-style fabric strap (below) with a twill effect. The denim look seems to be trending this year with a number of brands at Baselworld rolling out ‘denim-inspired’ straps. 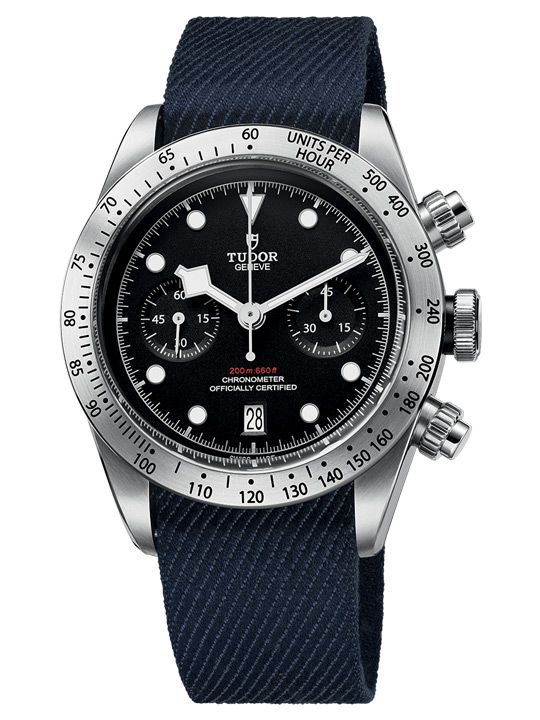 Although the case comes in at 41mm, it sat on our slim wrists really nicely and, while it’s got a more masculine vibe, could really work for ladies who are after a sportier look too, especially when paired with the denim fabric strap. But the clincher really is in the price. For an in-house column wheel chrono with vertical clutch, the watch is priced very competitively at S$6,480 for the leather option and S$6,912 for the bracelet version. A solid chronograph under S$7K from a brand that’s keeping its competition on their toes? Count us in.