Safe. That’s the first word that comes to mind when looking through Tissot’s Chemin des Tourelles collections over the past few years (read about it here). They’re classic, elegant and come in a variety of sizes, finishes, dial and bracelet options, but none stray too far from the dressy, slightly formal look which make them easy to wear and well-suited to both gents and ladies.

That said, there are plenty of 'safe' options on the market today—most of them packaged with equally conservative quartz movements that don’t rock the boat. But that’s where the Chemin des Tourelles gets interesting. Instead of a predictable quartz calibre, the series is driven by Tissot’s revolutionary Powermatic 80 movement.

Launched in 2013, the Powermatic 80 (above) is a collaboration between Tissot and ETA that resulted in an incredibly energy efficient calibre offering 80 hours of power reserve thanks to various innovations.

While the most straightforward way of increasing power reserve would be to simply add a bigger barrel and longer mainspring - or an additional barrel, for that matter - this would take up more real estate in an already space-starved case. Instead, the movement’s frequency was reduced from 4Hz to 3Hz, thereby cutting back the overall amount of energy used. In addition, the size of the barrel arbor (the core around which the mainspring is wound) was also reduced so the mainspring has a longer runway. 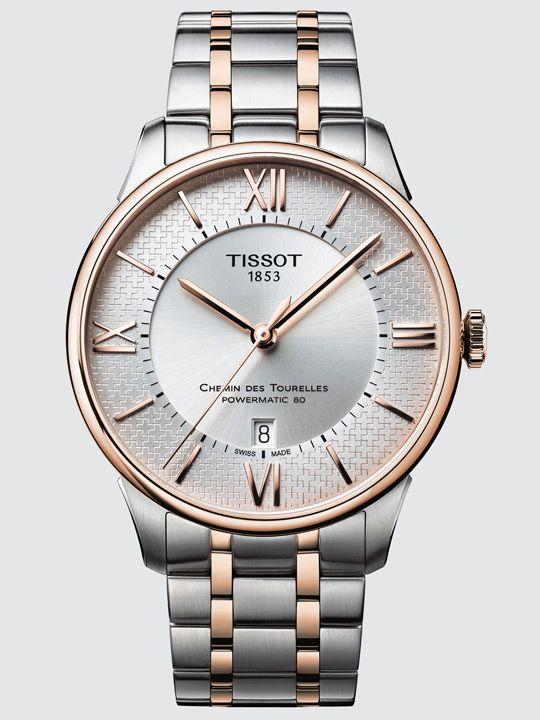 In a year when the regulations for the ‘Swiss-made’ label have changed (from requiring 50 per cent of the watch to be produced in Switzerland to now 60 per cent), the new Chemin des Tourelles (above) aptly incorporates a very Swiss element—a Swiss franc coin embedded in the caseback (below). It also features Helvetia, the female national emblem of Switzerland, from which the timepiece gets its name—the Helvetic Pride special edition—a tribute to the tradition of Swiss watchmaking. The dial is decorated with a Swiss cross pattern and, for the ladies, has a mother-of-pearl centre. PVD rose gold accents elevate the classic appeal of the watch which wraps effortlessly around the wrist.

In a chat at this year’s Baselworld fair with Tissot’s president, François Thiebaud, he asserted the brand is about “affordable luxury that’s also high in quality”—clearly encapsulated in the Chemin des Tourelles. With the power reserve on luxury watches averaging somewhere between 48 and 72 hours, an 80-hour power reserve in a beautifully finished Swiss-made watch that’s just S$1,330 is very good value indeed.