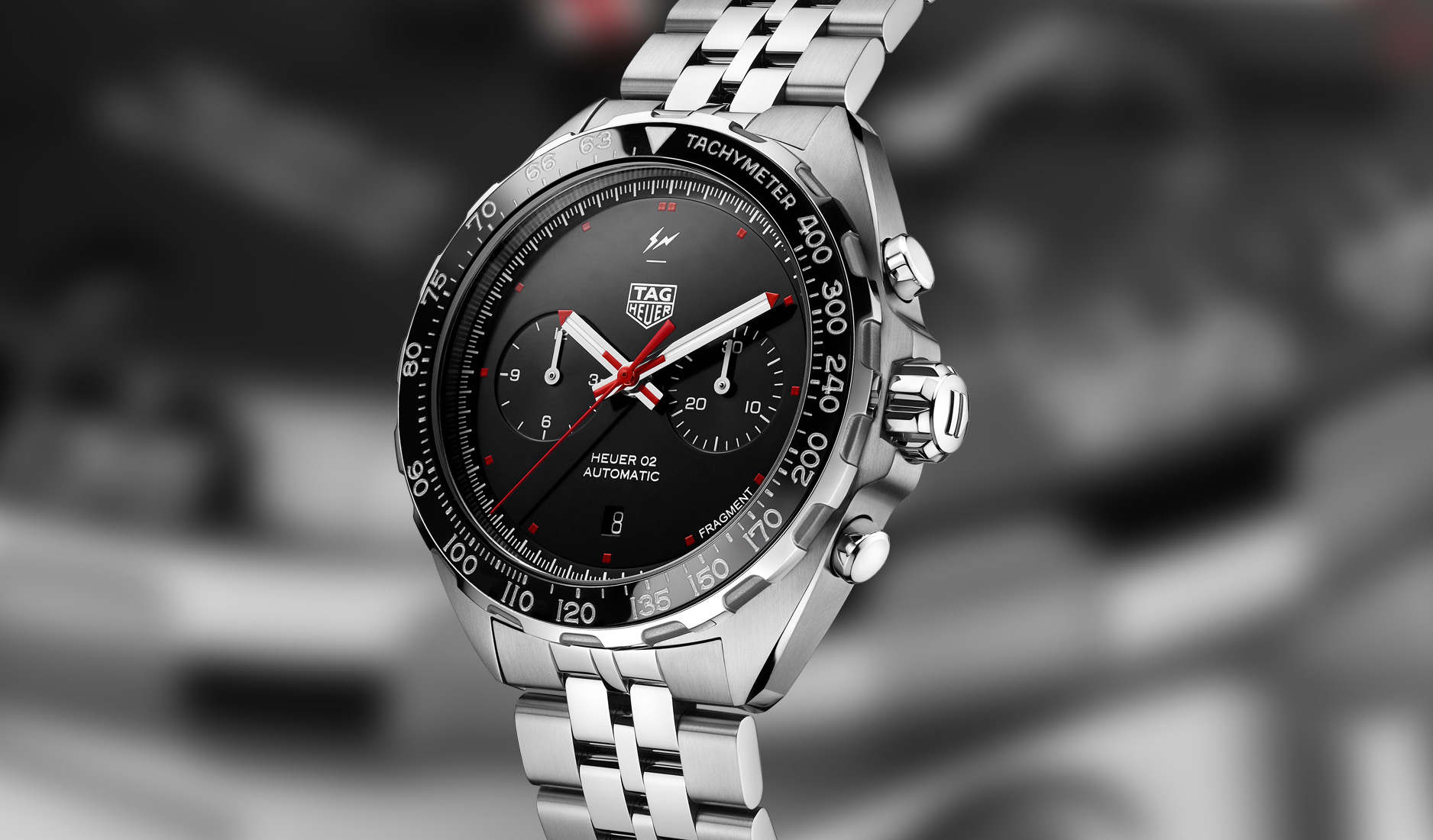 From working alongside British supercar marque Aston Martin to tapping the genius of contemporary pop artist Alec Monopoly, TAG Heuer is always up for a bit of cross pollination for its limited edition drops. And for its latest crossover project, the Swiss watchmaking giant has enlisted Hiroshi Fujiwara, one of the pioneers of global streetwear and founder of Fragment Design, a multi-disciplinary creative agency that boasts a who’s who client list spanning Moncler to Nike.

For the 500-piece TAG Heuer x Fragment Design Heuer 02 Chronograph, Fujiwara opts for a fusion of vintage and street styles. The result? A watch that evokes a 1970s tool watch spirit, while brandishing design nods to the era’s subversive punk culture that Fujiwara is known to be heavily influenced by.

The TAG Heuer x Fragment Design Heuer 02 Chronograph draws its core aesthetic from the C-case models from the 1960s and 1970s, distinguished by the smooth and cambered case silhouette. This lends the watch a charming retro touch, which is augmented by the five-row link bracelet and bi-compax chronograph interface, which, in turn, is an interesting departure from the three-counter chronographs that dominate the Carrera’s modern-day line-up.

As with his other brand collaborations, Fujiwara offers a light touch with his own embellishments. Only the tiniest jolts of red accent the hour markers and hands to enliven the black opaline dial. Apart from Fragment Design’s twin-lightning logo poised alongside TAG Heuer’s, and the word ‘FRAGMENT’ between four and five o’clock, the designer has taken care not to overdo things – at least on the dial side. 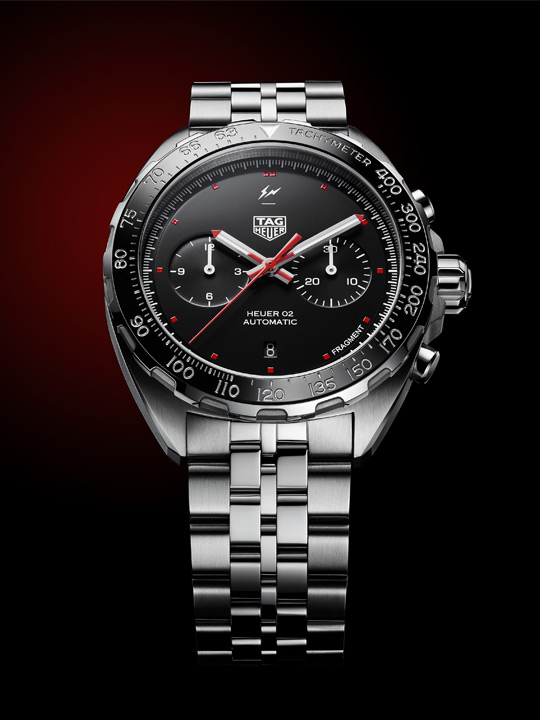 A watch buff himself, Fujiwara must have understood that the flipside of a mechanical timepiece demands just as much attention. And he demonstrates just as much by lavishing the sapphire caseback of the TAG Heuer x Fragment Design Heuer 02 Chronograph in red and etched with Fragment Design’s logo.

The translucent crimson and lightning motifs offer a peek at the Calibre Heuer 02 automatic movement. Launched late-2019, the chronograph movement with date display is equipped with column wheel and vertical clutch, components that enable smooth and precise actuation of the chronograph, which are found in high-end chronograph calibres. Another outstanding virtue is its power reserve, which stands at 80 hours – almost double that of other industry-standard chronograph movements. 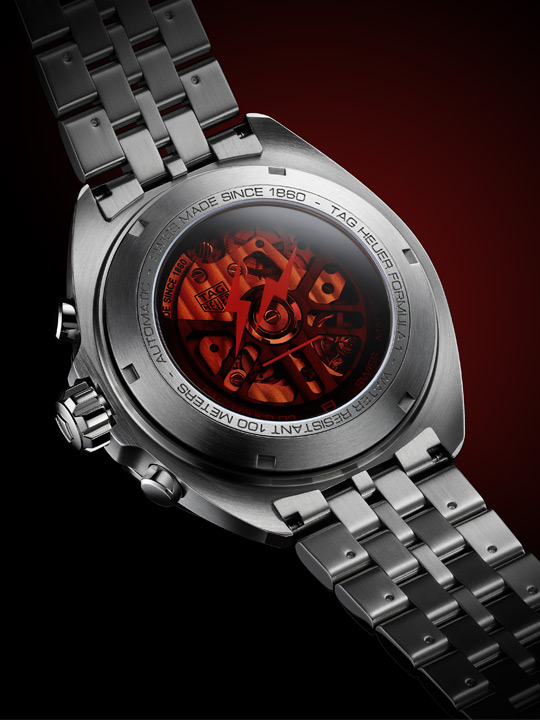 Though conceived by one of the most eminent figures of streetwear and design, the TAG Heuer x Fragment Design Heuer 02 Chronograph isn’t flashy or ostentatious as commonly associated with other similar watch-street culture mash-ups. Instead, the watch looks like something that folks who once grew up on Stussy but can now afford to tailor at Saville Row can get into. The street-edge and cred still shine through, albeit with more subtlety and sophistication. 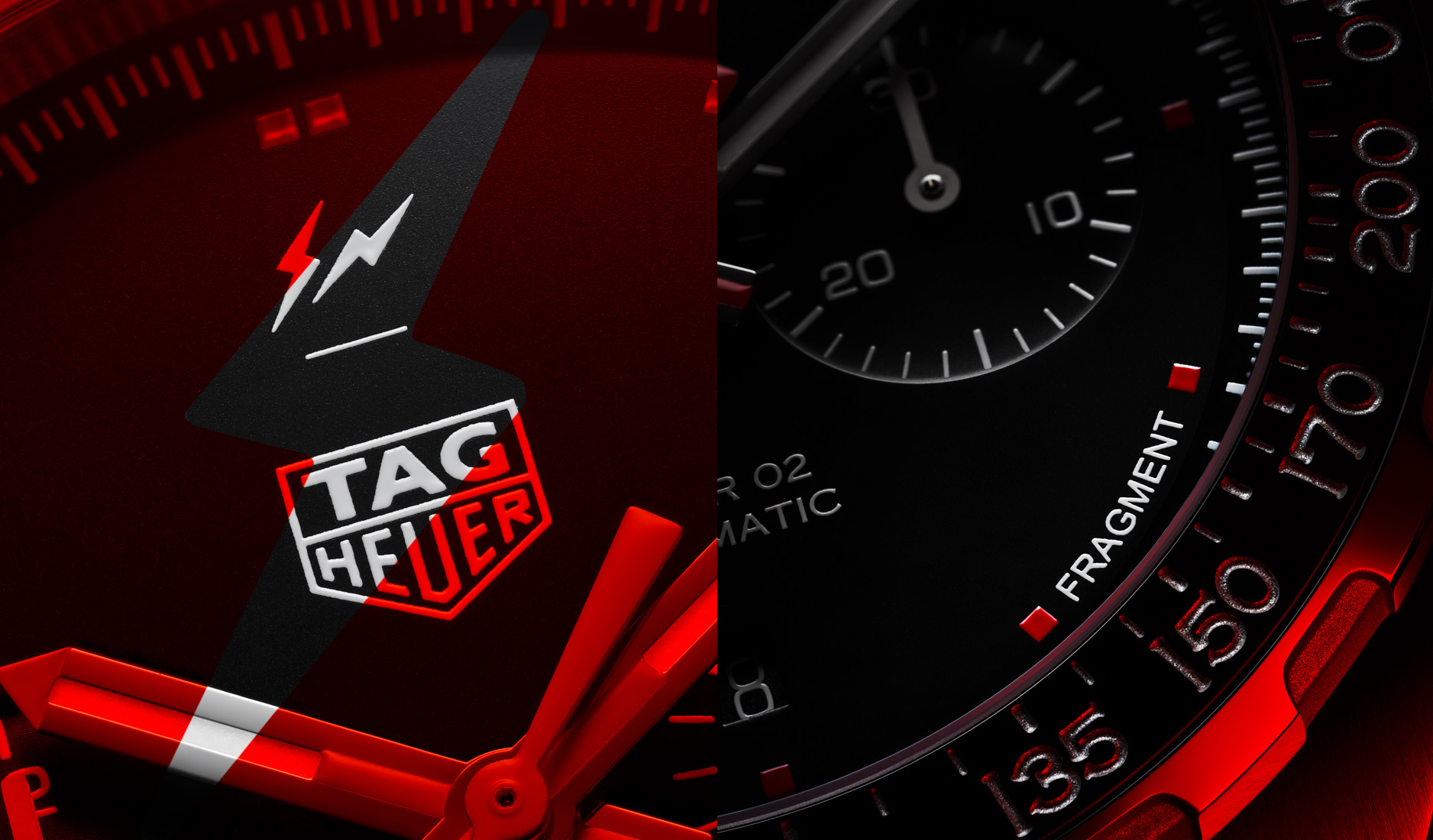