If Rolex owns the Paul Newman Daytona, TAG Heuer surely has its Steve McQueen Monaco. Like the Daytona, the Monaco is highly covetable, thanks to its strong automotive heritage, association with a race and screen legend, and overall cult status.

When it was launched in 1969, the Monaco went against everything that was fundamental and traditional about Swiss watchmaking. Left-handed crown? Check. Water-resistant square case? Check. In fact, the watch was the first square automatic chronograph in the history of Swiss watchmaking to be water-resistant. In other words, it was both a pioneer and a rebel.

In the years after, various incarnations were rolled out in homage to the original, which found fame on the silver screen when Steve McQueen chose to wear it while filming the 1971 movie, Le Mans. In the film, he drove the famous Gulf Porsche 917K, bearing the blue and orange colours of Gulf Oil—the company that sponsored McQueen in the movie.

The latest incarnation of the Monaco comes as a special edition in a global partnership with Gulf: the oil company is represented both in colour scheme and in a logo above the date window at six o’clock. 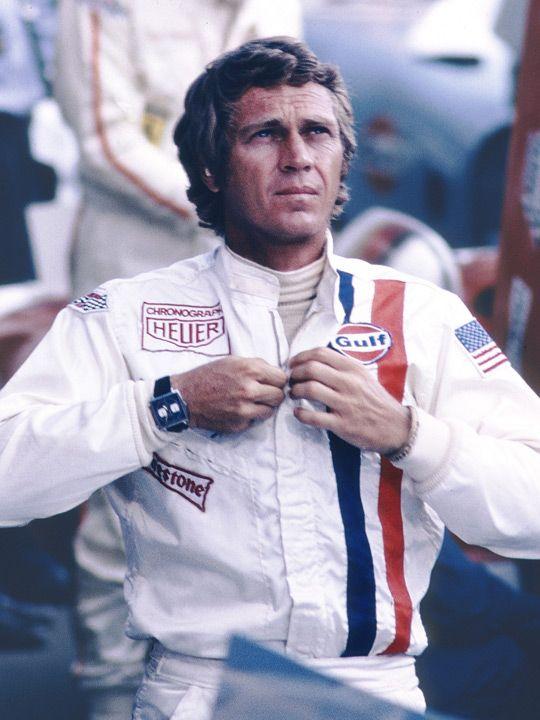 Interestingly, this isn’t the first Gulf-branded Monaco. The association started in 2005 with the Monaco Vintage CW2118, released as a limited edition of 4,000 pieces in commemoration of what would have been McQueen’s 75th birthday. The watch was then dressed in red and blue stripes on the right, in tribute to the driving suit worn by McQueen in Le Mans (above).

All other Gulf editions since then (in 2007, 2009, and 2018) have featured orange and blue stripes, with minor variations in the shade of blue, design of the sub-dials and size of the Gulf logo.

Undoubtedly, orange is a difficult colour to apply to a watch, without it screaming ‘over-the-top’. But hats off to the TAG Heuer design team, which has managed to incorporate the hue in a totally non-obtrusive and stylish way, without gaudy overtones. 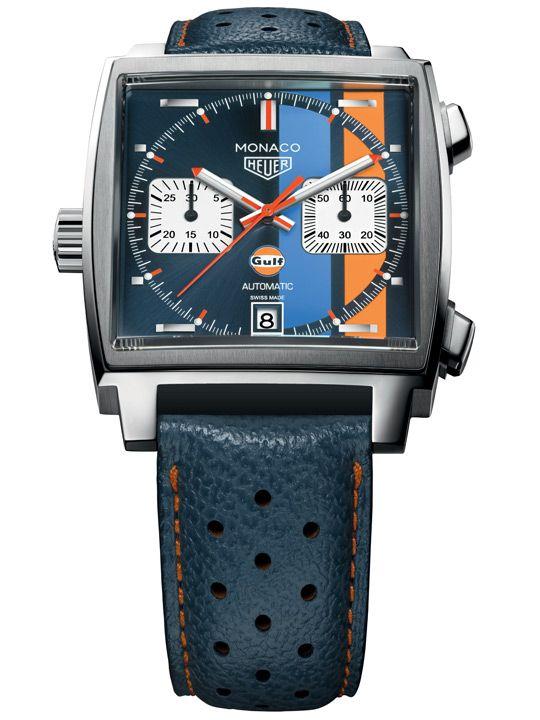 For the 2018 edition, orange accents are applied to the hour and minute hands, while the seconds hand and hour markers are in an identical shade. In addition, the perforated blue leather strap features understated orange stitching, like the 2007 model.

This latest version is also the first to use the Heuer logo, instead of the TAG Heuer shield—an homage, possibly, to the era of the original Monaco when the brand was still known as Heuer. It is also the only Gulf edition with a left-hand crown. 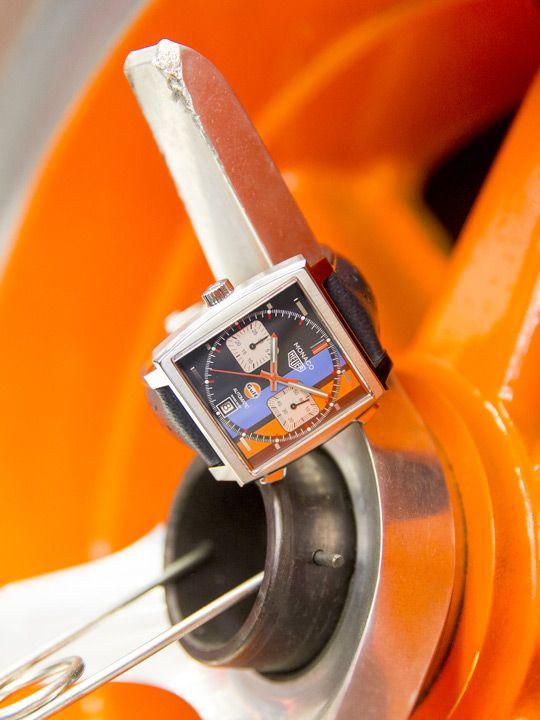 These attributes make the TAG Heuer Monaco Gulf 2018 Special Edition highly collectible, on top of its already handsome aesthetics. Fans of the Gulf series will no doubt want to add this to the collection, but we also foresee many TAG Heuer aficionados waiting in line for the chance to own a little bit of racing history.