Souped-up Carrera sportiness from the inside-out. 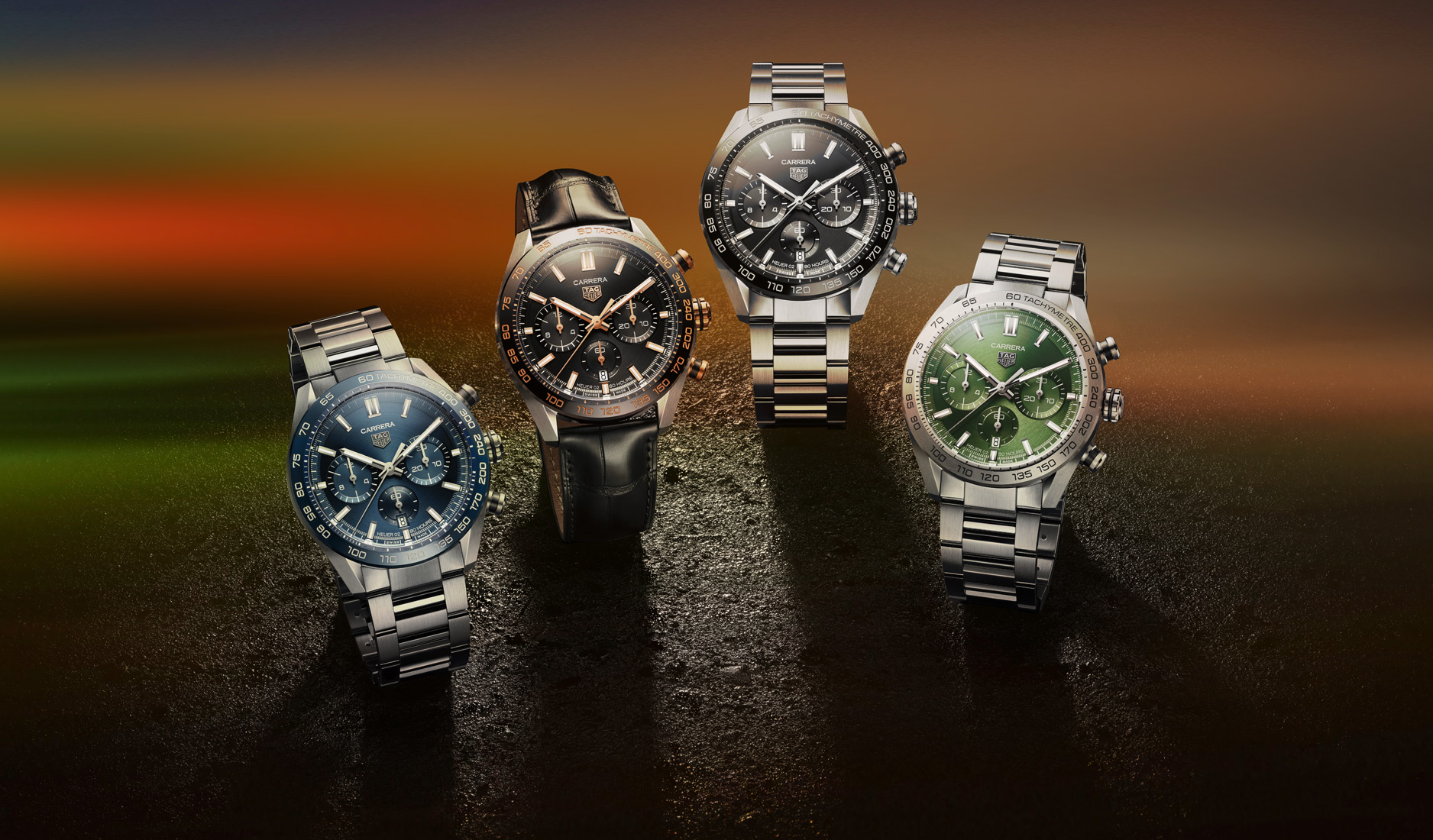 It seems that the face of TAG Heuer’s 160th anniversary celebrations has been endowed with a bit of a facelift itself. The famed Carrera chronograph, a staple of the TAG Heuer repertoire since its introduction in 1962, now boasts a number of upgrades from the inside-out that aim to reconcile the collection’s modern-day disposition with its past, while plotting a new aesthetic that further blurs the line between utilitarianism and luxury.

Designed by then-CEO Jack Heuer, the original Carrera chronograph combines no-nonsense functionality and clean design in one winsome, sporty package – purpose-made for racecar drivers who needed to read the time with minimal fuss during rallies (the name Carrera was inspired by the 1950s Carrera Panamericana race in Mexico). 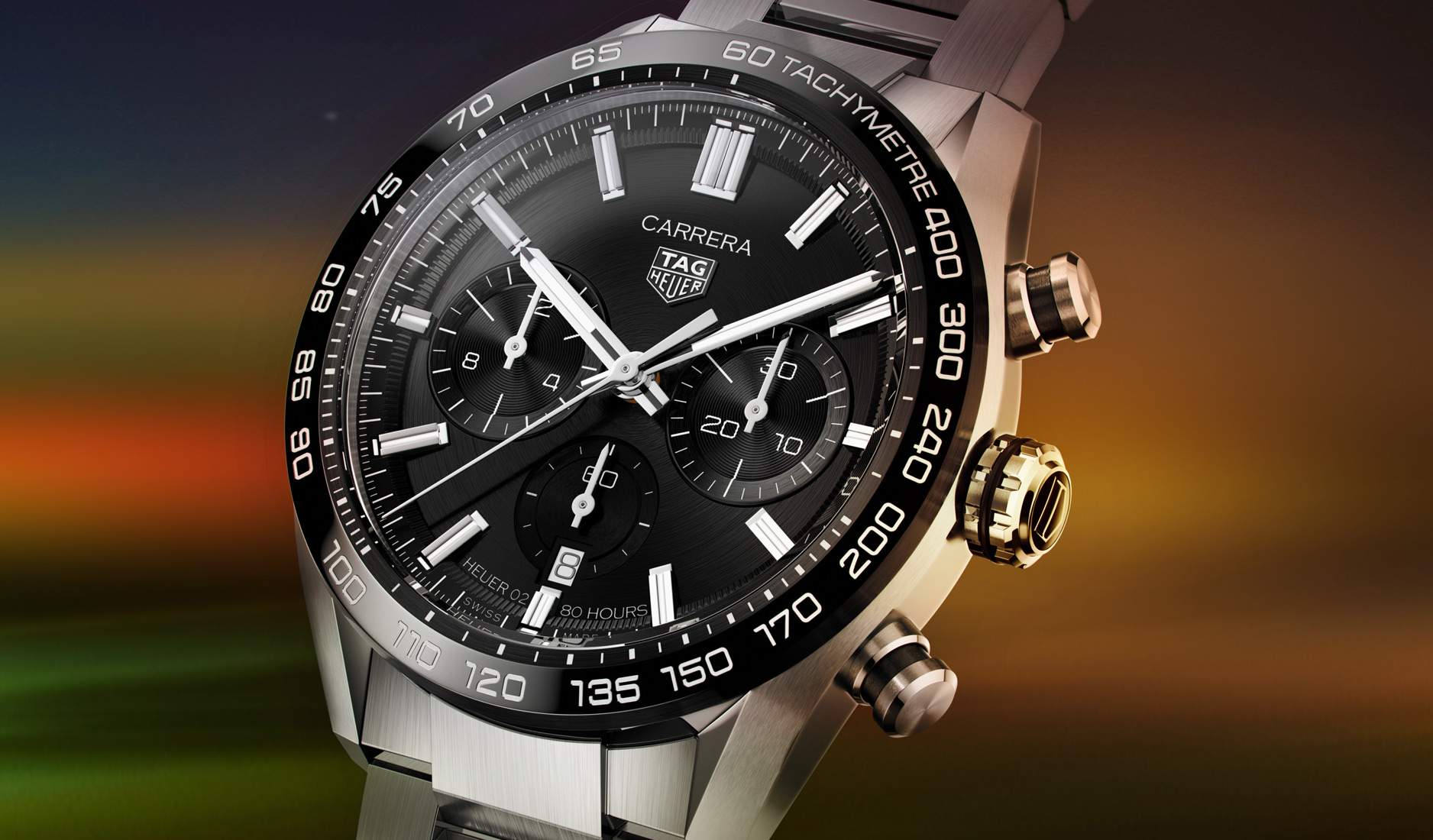 The impact of the Carrera to TAG Heuer’s fortunes isn’t simply reflected in the collection’s longevity. While remaining one of the brand’s best-sellers till today, the Carrera collection has also been an effective launchpad for some of TAG Heuer’s most progressive creations. They span the Carrera Heuer-02T tourbillon from 2016 that, at S$20,700, was billed then as the most affordable Swiss-made automatic tourbillon, to the epochal Connected Watch, a smartwatch which bases its case shape and profile on the Carrera. Along the way, the Carrera collection has also proven to be aesthetically nimble, embracing a variety of styles ranging from open-worked dials to feminine executions with mother-of-pearl and diamond embellishments.

The new range of TAG Heuer Carrera Sport Chronographs, however, appear to be taking a step back from all of the above; as if the brand’s designers are taking stock of how far the collection has come, as they attempt to reconnect the modern-day versions with the original. The Carrera class of 2020 eschews showy embellishments in favour of functional design and legibility. At the same time, they are handsome and sophisticated, oozing moneyed allure in sportive cloaks. 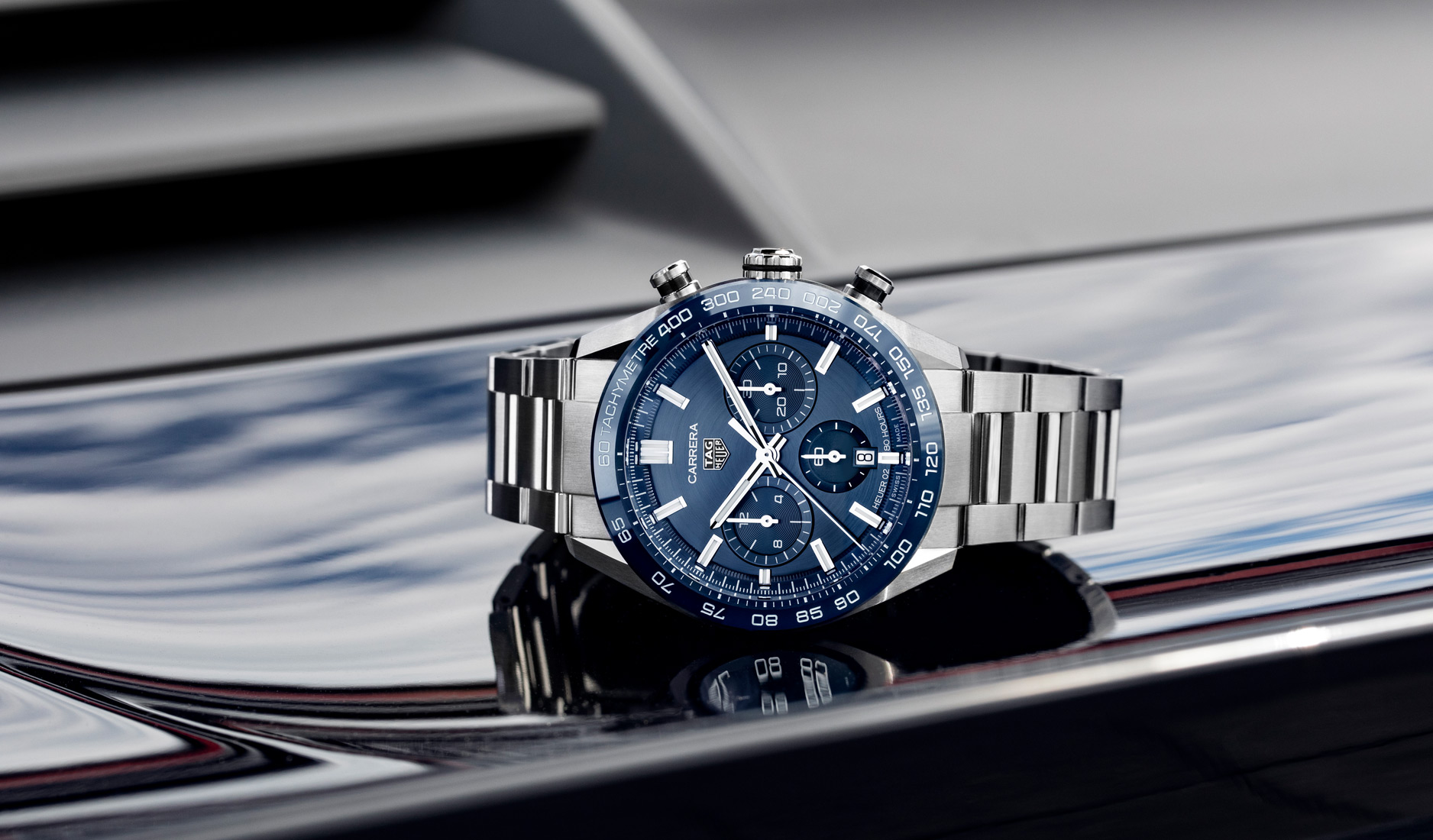 Although the new chronographs are bold and dynamic in their plus-sized cases and coloured dials with circular brush finishing, it isn’t hard to join the dots between the modern models and the 1963 OG. The tri-compax chronograph layout with central hand, the baton-style applied hour indices, and contrast finishing on the perimeters of the sub-dials all hark back to the original. Meantime, the use of a bezel tachymetre, a hallmark of modern-day Carreras, help to bridge the collection’s past and present.

The new Carrera Sport Chronographs are powered by the Heuer Calibre 02, a movement that was launched in 2018 and primed to be the main engine for all modern-day TAG Heuer chronographs. The vertical clutch, column wheel-equipped chronograph movement promises 80 hours of power reserve on a full wind, and features a date display here at six o’clock, relocated from the ‘4:30’ position seen on the Carrera Calibre Heuer 02 chronograph from 2019. 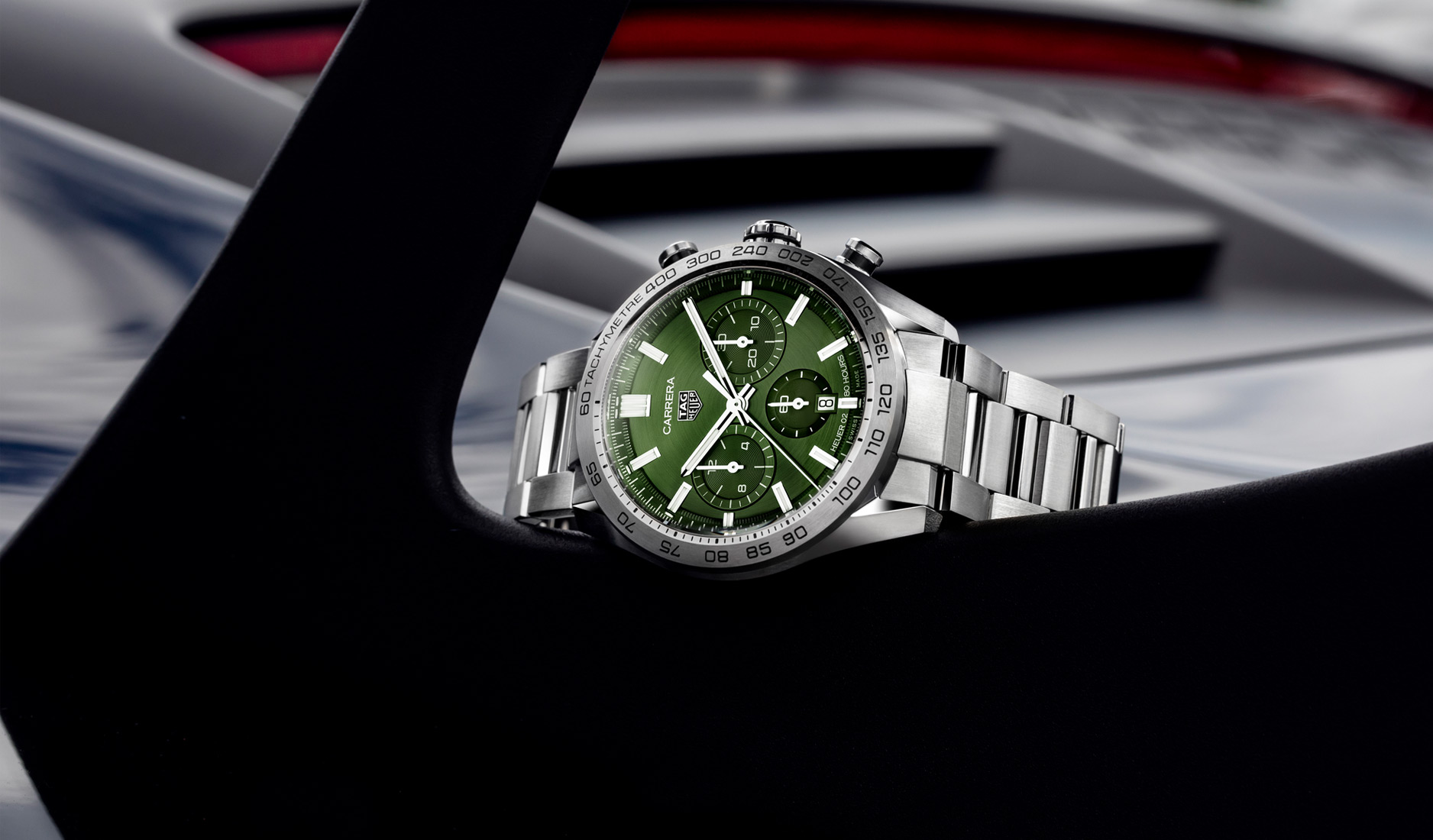 Rocking alternate brushed and polished finishing on the neatly facetted lugs and H-shaped bracelets, which have been re-designed to wear more comfortably, the 44mm steel Carrera Sport Chronographs exude both refinement and a sense of old-style swag – especially the version with green bezel and steel tachymeter bezel. Those who lean toward more a contemporary look, however, will be partial to the other versions featuring matching black or blue coloured ceramic bezels and dials.

The standout piece, however, is the version paired with alligator leather strap featuring black dial and bezel peppered with rose gold-plated accents on the crown, applied indices and tachymeter engraving. The watch’s high-contrast colourways and hints of gold suggests ‘vacationing boss’, which, in our opinion, is probably the best kind of boss mode to be in ever. 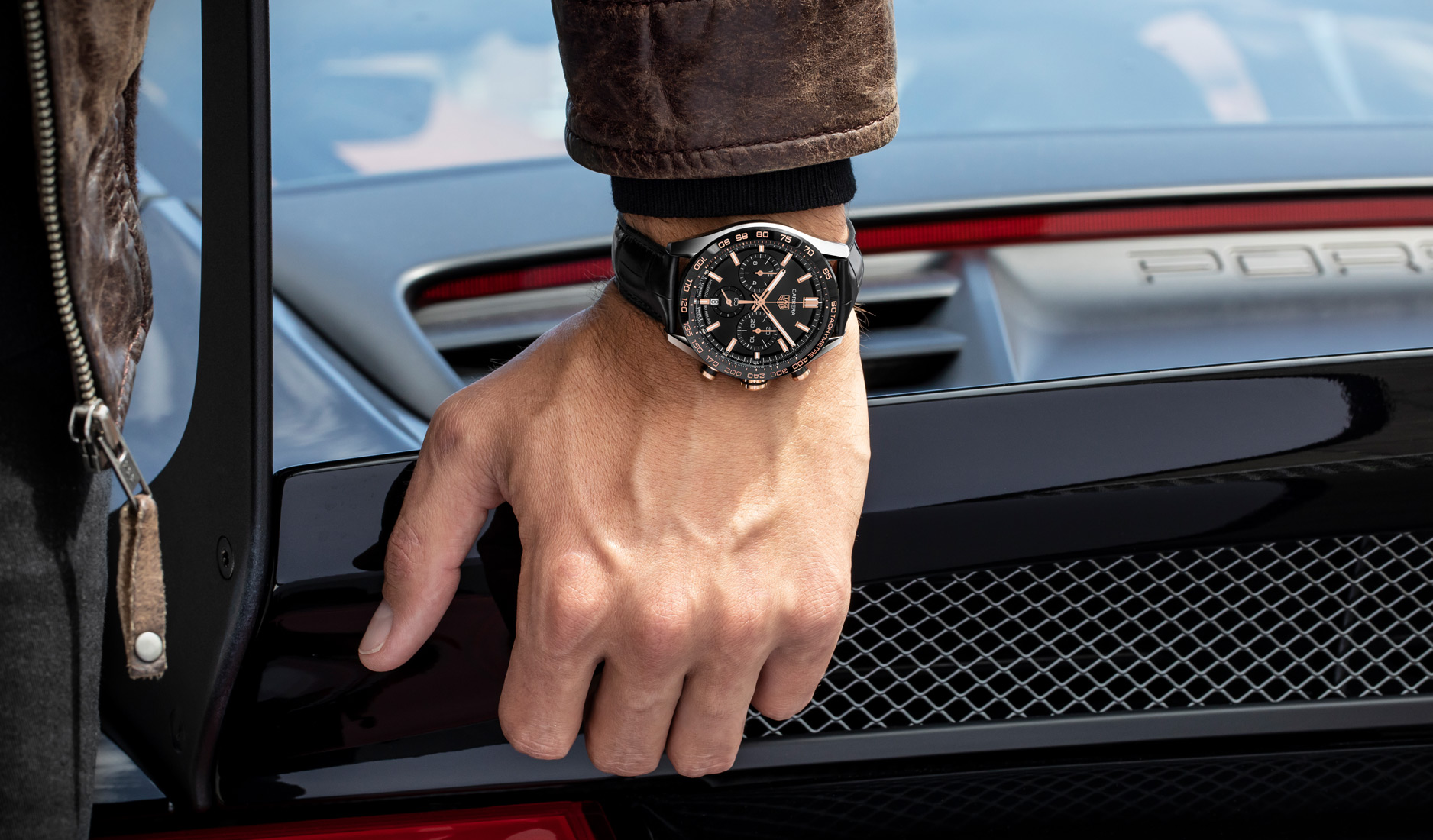