While this year has been all about the new GMT-Master II, the Deepsea deserves its share of love too. Not least because it is a strong, masculine watch that divers and non-divers alike will appreciate, but also because it does what it was built to do.

The big kahuna of Rolex’s dive family, the handsome Deepsea is a veritable underwater companion, fashioned for adventurous escapades as deep down as 3,900m. If it had a Tinder profile, that would probably be it. Swiping right yet?

Last seen four years ago when Rolex unveiled a Deepsea in honour of director James Cameron, the 2014 version was a commemorative edition in tribute to Cameron’s Deepsea Challenge expedition, which saw him solo pilot a submersible to approximately 11,000m in the ocean’s deepest point, the Mariana Trench. A movie detailing his experience and findings was subsequently released, as was the Rolex tribute watch. 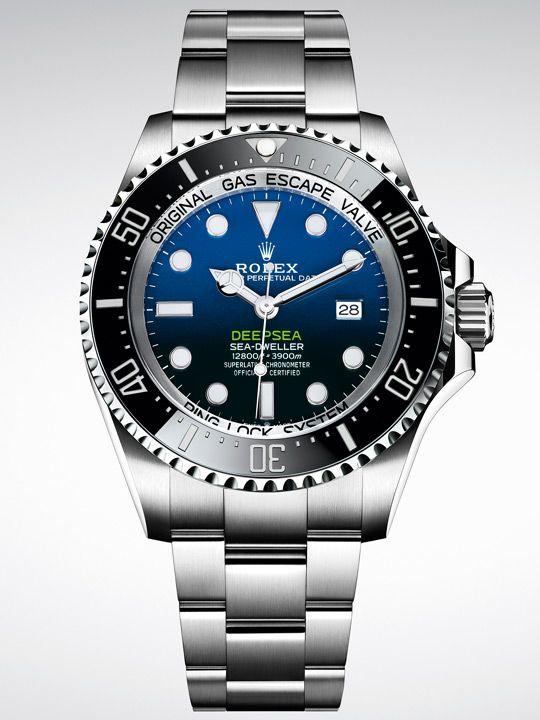 That timepiece featured a stunning D-blue dial, with a blue in the top half mimicking the ocean’s hue, and a gradient to black at the bottom, simulating the light levels in the sea as you get deeper.

This year, the new Deepsea retains that distinctive dial, with its signature Oyster case and Ringlock system, both designed to withstand the intense pressure sustained from great depths in the ocean. Providing further pressure relief is Rolex’s patented helium escape valve at nine o’clock.

The Deepsea is rigorously tested for waterproofness in a hyperbaric test tank, jointly developed by COMEX (Compagnie Maritime d’Expertises), a French company renowned for its underwater engineering and hyperbaric tech capabilities. In addition to being certified waterproof for 3,900m, there’s also an extra safety margin of 25 per cent, which means the Deepsea can technically go down 4,800m and still be alright (although whether you’ll be alright is another matter).

Other standard features like the uni-directional rotating bezel and Glidelock bracelet extension system remain. What’s new, though, is the Calibre 3235 used in the Deepsea for the first time. It’s also the same calibre that drives the Sea-Dweller, which Rolex released last year.

Equipped with Rolex’s proprietary Chronergy escapement for high levels of energy efficiency, the movement is also anti-shock and anti-magnetic. Combined with barrel architecture, the engine now has a longer power reserve of 70 hours.

At 44mm and about 18mm in height (including a domed 5.5mm thick sapphire crystal), this watch, as we mentioned earlier, is a chunky hunk. As an everyday watch, it might feel a little weighty so it’s perhaps not the most office-appropriate ticker (here are some we’d recommend instead). But it’s got that rugged, macho tool watch vibe that we love, and we could definitely see it as a delectable piece of weekend wrist candy.