Say what you will but there’s no denying the Daytona is one of Rolex’s most coveted models and continues to be in high demand globally. In fact, the way the new stainless steel models were feted last year, you’d have thought they were the only watches worth buying from Baselworld 2016.

Why is the Daytona so beloved? Well firstly, it’s hard not to succumb to a chronograph’s sporty yet sexy vibe. Add to that the Rolex insignia and all that it stands for, and you’ve got yourself a winner. But while the Daytona is something of a celebrity in the Rolex stable, the brand had already been producing chronographs from the 1930s, way before the Daytona was born in 1964. 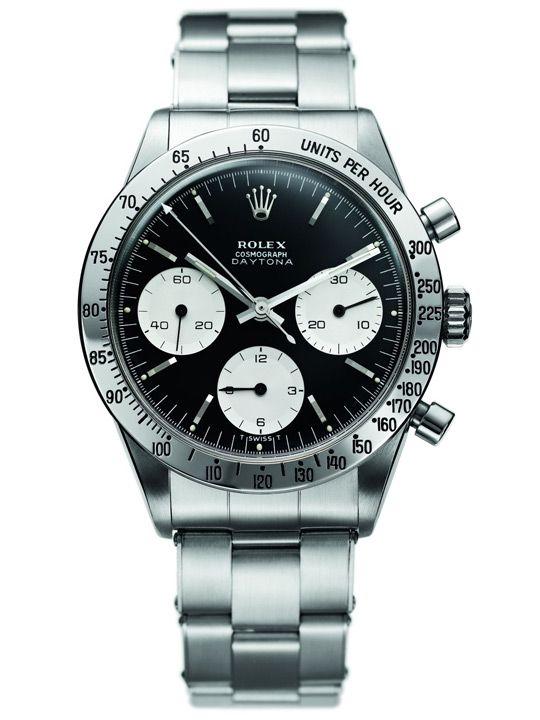 In 1955, the stainless steel Rolex Oyster Chronograph was introduced with a manual-winding movement, tachymeter and telemeter (for measuring distances) around the edge of the dial. Eight years later, the Cosmograph (above) made its debut with the tachymeter engraved on the bezel instead of printed around the dial edge—a feature all future Cosmographs would come to bear.

The next year, to mark Rolex’s sponsorship of the ’24 Hours of Daytona’ sports car endurance race, the Cosmograph was inscribed with ‘Daytona’ above the seconds sub-dial at six o’clock. Since then, the watch has been affectionately referred to as the ‘Daytona’. 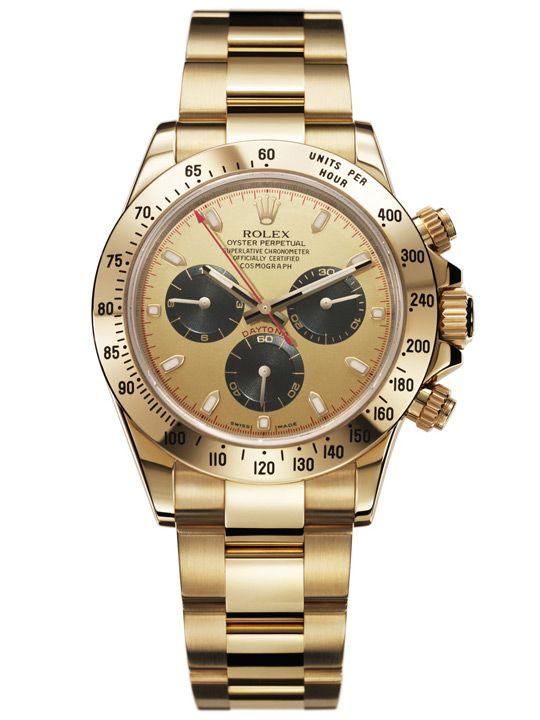 Early versions saw the watch powered by Valjoux movements and, later on, Zenith’s El Primero self-winding calibre created in 1969 with one of the highest beat rates then—5Hz. In customising that movement, Rolex removed the date function and replaced approximately half the components, adding a larger balance spring for improved precision. It also scaled the beat rate down to 4Hz. Today, the new Daytonas are fitted with Rolex’s in-house self-winding Calibre 4130 with column wheel, vertical clutch and a power reserve of about 72 hours.

Last year's stainless steel offerings flew off the shelves while leaving in their wake a long waiting list. This was the first Daytona update after a platinum anniversary edition in 2013 featuring a brown bezel and blue dial. Going back to safer colour choices (read: black and white) and the ever-popular stainless steel that collectors so love, the 2016 models were also the first to be adorned with a black ceramic bezel, totally upping the desirability factor.

After the overwhelmingly successful versions in stainless steel, the natural progression for Rolex would be to introduce the Daytona in precious metals. This year, the Swiss marque rolls out three new versions of the Daytona in white gold, yellow gold and Everose gold.

While the white and Everose gold models are both extremely easy on the eye, it's the yellow gold version that appeals to us the most when contrasted with the black accents found in the bezel, sub-dial and strap.In a bid to enhance the sports luxe feel of the watch, Rolex has paired the icon with an Oysterflex bracelet, augmenting the racecar personality of the timepiece. 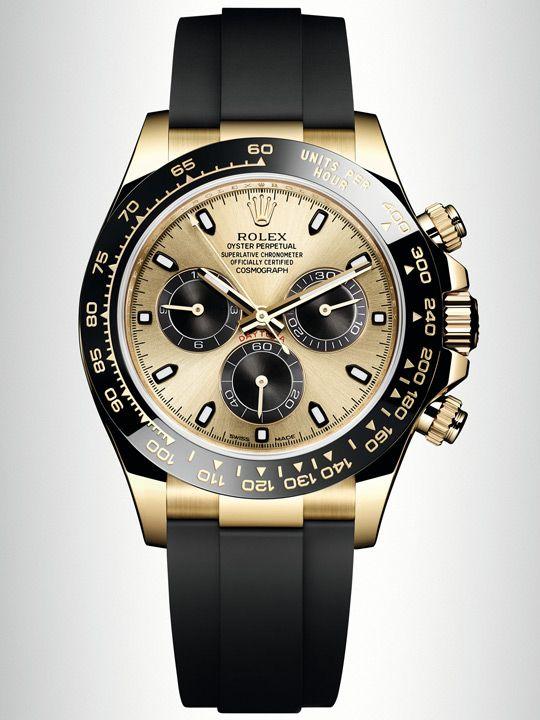 The last time we saw the Oysterflex was in 2015 when it was introduced on the new Yacht-Master. An ingenious innovation, the Oysterflex combines the flexibility of a steel bracelet with the comfort of a rubber strap. At its core is a metal blade that’s wrapped in what Rolex calls a “high-performance black elastomer”, with ‘elastomer’ essentially being an elastic polymer that’s super durable and resistant to environmental effects. The strap (Rolex calls it a ‘bracelet’ still) comes with an Oysterlock safety clasp in a corresponding material to the case and also features the Easylink rapid extension system. On the wrist, the Oysterflex bracelet feels light, comfortable and adds even more personality to an already good-looking ticker.

The Rolex-patented monobloc Cerachrom bezel has been retained from last year with bezel inserts that match the case material. Thanks to the single piece of ceramic that holds the sapphire crystal in place, together with the Oyster case and Triplock triple waterproofness system, the watch is waterproof up to 100m.

The new Daytona certainly looks a lot sportier than its previous incarnations from the past few years, not least because of the Oysterflex bracelet. But that also means it’s less versatile in the sense that you would probably take it on an outdoorsy trip but swap it out for that black tie gala. On the whole it’s still a really handsome watch and the Oysterflex is growing on us. Besides, how many black tie galas do you really have to attend anyway?