A Rolex that rocks really hard. 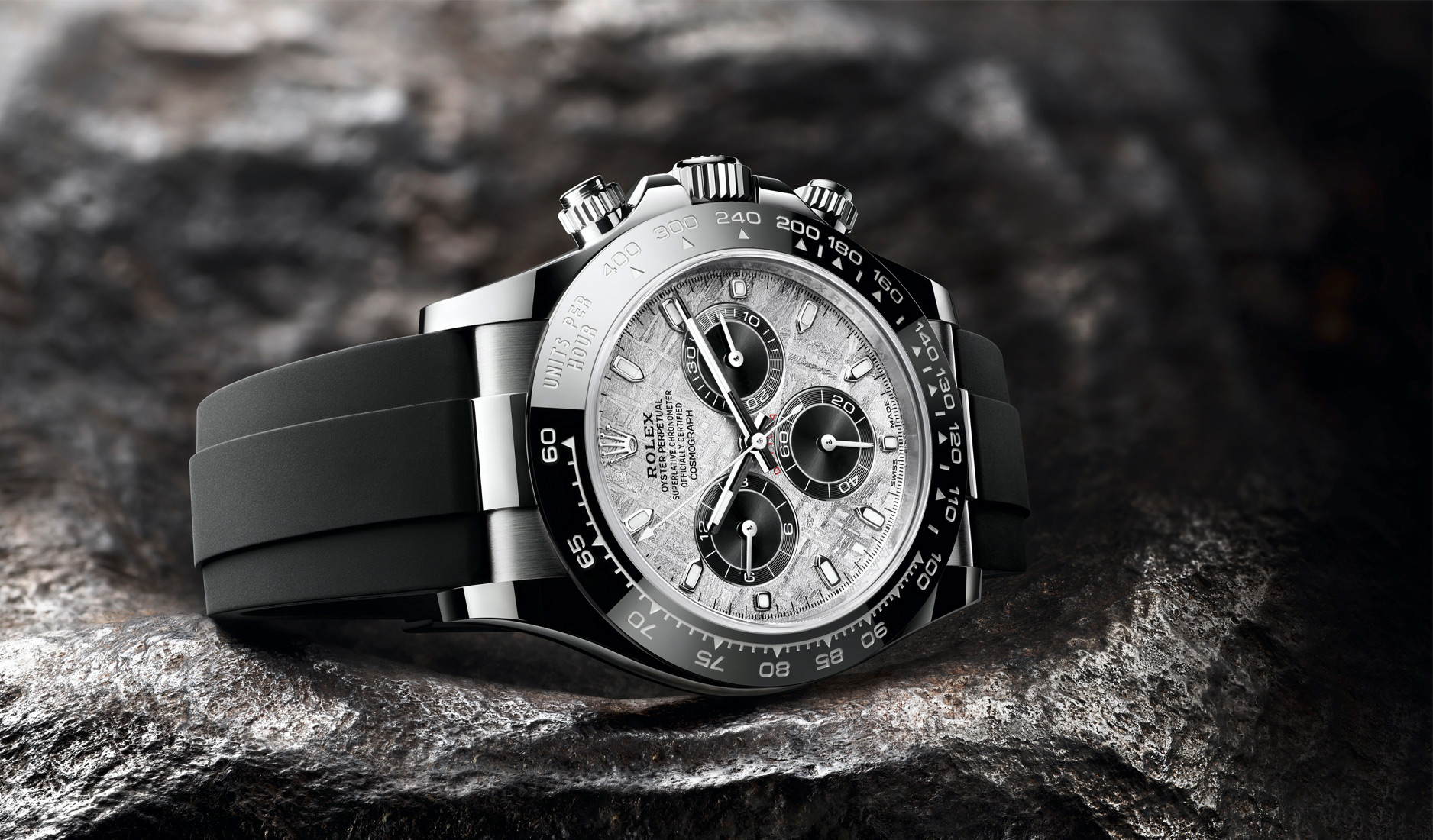 This watch is, like, literally out of this world, ok? That seemingly scratched-up surface and intriguing shades of grey on the dials of the latest Rolex Cosmograph Daytonas aren’t the handiwork of some careless decorator. Rather, the dials’ web of coarse lines and tones, known officially as Widmanstätten patterns, have taken what seemed like an eternity to forge, hewn from metallic meteorite that came from asteroids which exploded millions of years ago and had, somehow, landed on our unsuspecting planet.

The meteorite’s journey is one arduous ride, too, having travelled and cooled through the cosmos before landing on Earth. The unique material, which comprises nickel and iron, eventually form a unique crystallisation during its incredible journey, which we can now enjoy on the dials of Rolex’s latest Daytona models.

Given the rare, naturally occurring composition of metallic meteorite, each thinly sliced piece of cosmic stone that appears on the dial is inherently unique, and no two dials are similar. Rolex, of course, only works with the best quality meteorites – known in the trade as the ‘Gibeon’ Meteorite, a Class IVA meteorite – and uses only the sections that displays the most beautiful crystalline patterns. 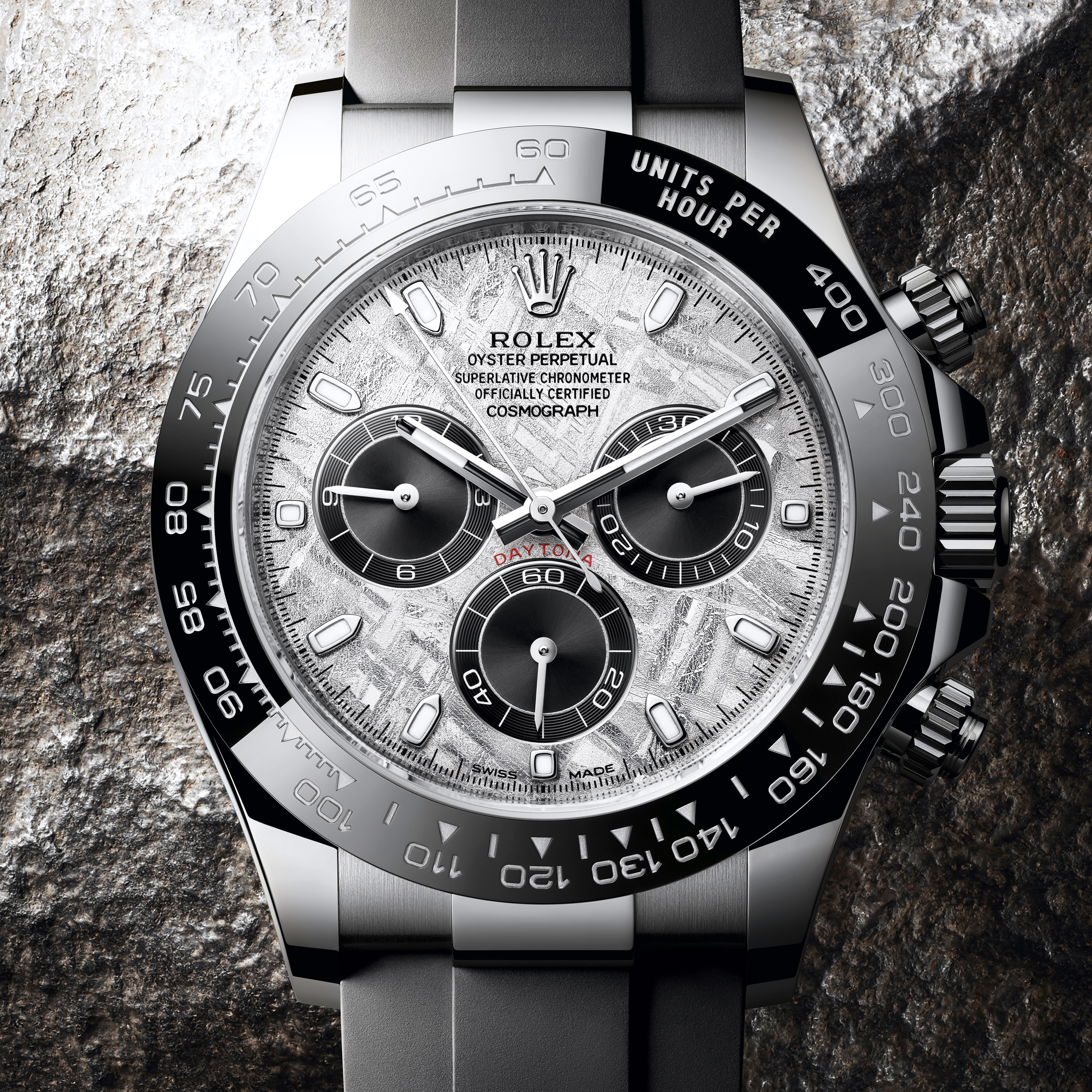 Although Rolex has long featured watches with meteorite dials, starting with early Day-Date and Daytona models, and subsequently also on premium variants of the Pearlmaster and Datejust, they are rare and hard to come by. The last sighting of a Rolex meteorite model was in 2019, when the brand issued the Ref. 126719 BLRO ‘Pepsi’ GMT-Master II in white gold.

This year, though, collectors have THREE options to lust after with new Cosmograph Daytonas in white, yellow and Everose gold. The new models will be familiar to fans; part of the range’s third series line-up that has been around since 2000, which features 40mm cases with gold or Cerachrom bezels, driven by Rolex’s in-house Calibre 4130 automatic chronograph movement that is precise to +/-2 seconds per day with 72 hours of power reserve.

Having said that, much like a bejewelled variant, a Rolex watch with meteorite dial is a statement of lavishness. With such a captivating material taking centre stage, the new Cosmograph Daytonas are instantly imbued with an air of flamboyance. Of the three, we are most partial to the model in white gold with black Cerachrom bezel and Oysterflex bracelet. It is easily the most ‘casual’ option that amplifies the racing DNA of the collection, even though it is virtually impossible to contain the meteorite’s indelible presence. The models in full yellow and Everose gold with matching three-piece Oyster bracelets, needless to say, appear even more extravagant. 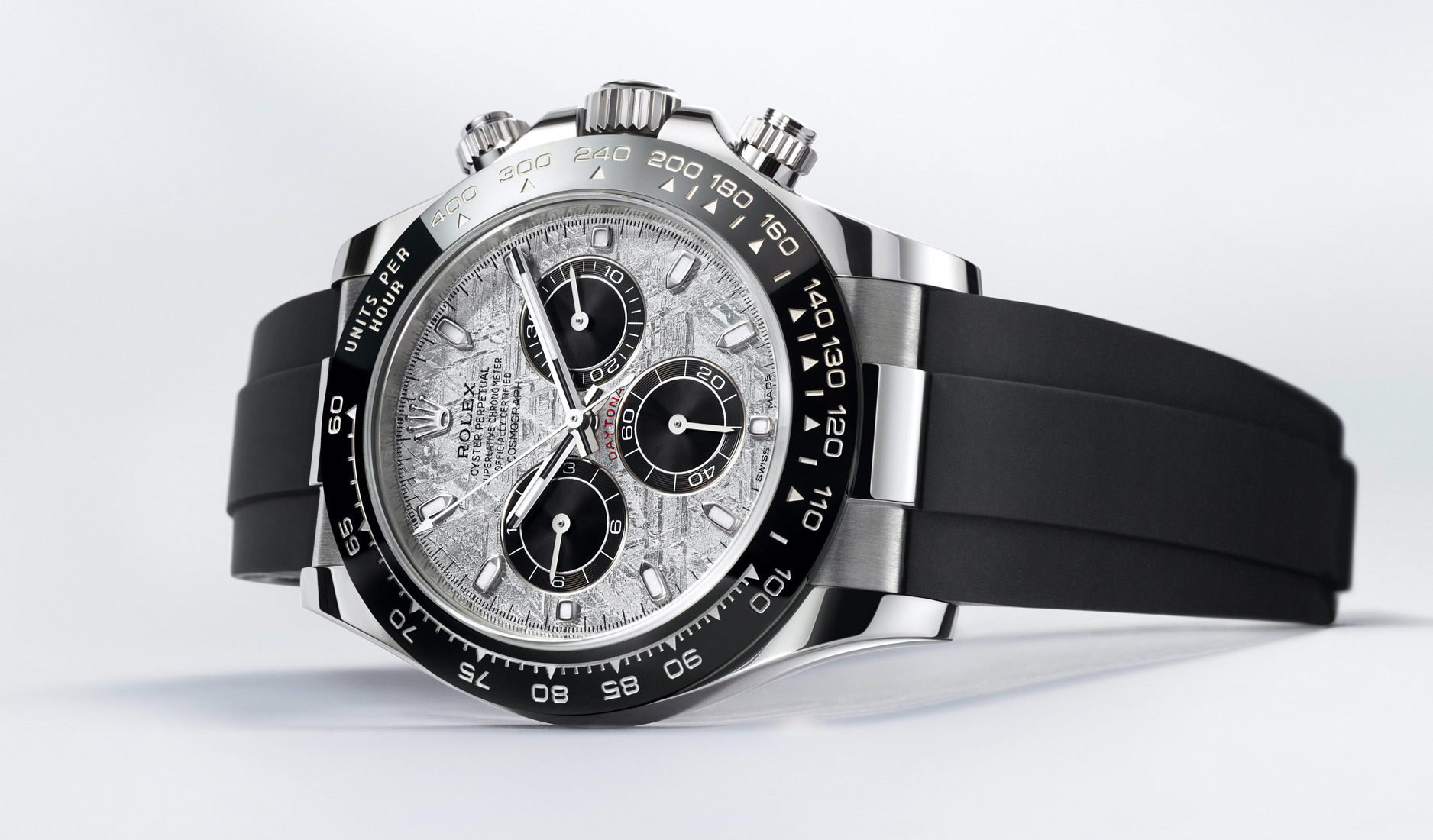 Purists who prefer a classic this-or-that are advised to look elsewhere. Everyone else, however, can just marvel at the watches’ forthright ostentation and mind-boggling conception, amplified in no uncertain terms by their cosmic chic.