While it isn’t one for flashy overtures, the latest Rolex Oyster Perpetual Air-King still commands attention and devotion.

We have been through this before. Time and time again, when Rolex marches out a new version of an iconic watch, naysayers get triggered and grovel about the brand being too conservative. Only for the lot of them to go: ‘Hang on, there’s actually quite a lot going on there’, and then grovel again about not getting in on the action earlier.

Admittedly we, too, had our reservations about how ‘new’ the new Rolex Air-King is. Ostensibly Rolex’s headliner of the year, it beat to the throne the likes of the new GMT-Master II with left-placed crown and date, and Datejust 31 models with gorgeous artisanal dials. And yet, like so many, the finer nuances of the new Air-King escaped us on first impressions. Until a more careful examination of the watch (isn’t this what watch appreciation ought to be about?), as well as comparisons with the previous model reveal, once more, that Rolex played its cards right and the devil is truly in the details. 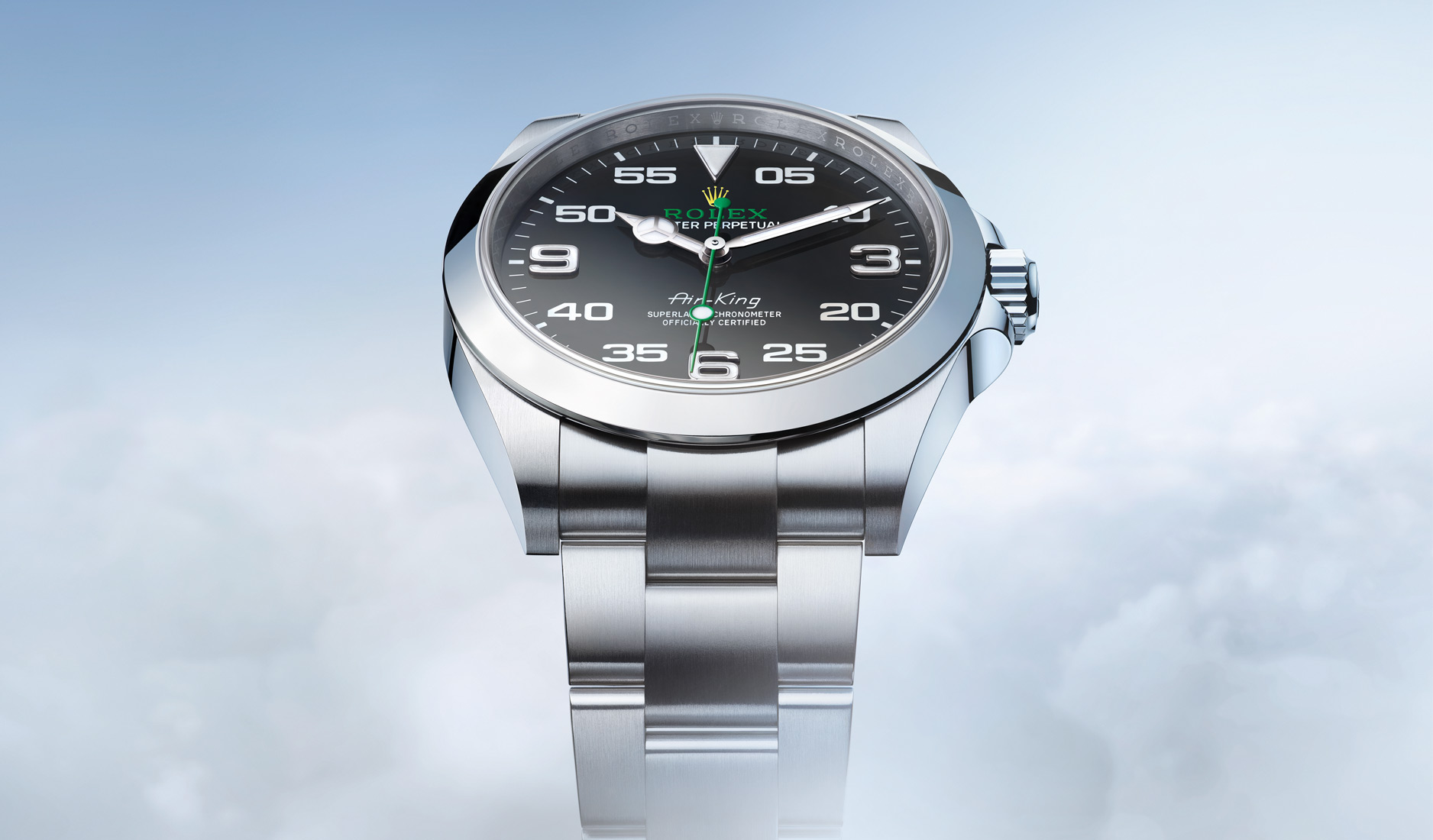 A watch billed as emblematic of Rolex’s links with the aeronautical world, the Air-King surfaced in 1958, when the name first appeared on an Oyster model. Legend has it that during the 1930s, the Rolex Oyster had accompanied many pilots on historic and groundbreaking long-distance flights – whether wearing the watch on their wrists or deploying it as an on-board chronometer – that shaped modern aviation as we know it today.

The Air-King continued to feature in Rolex’s catalogue through the decades, until it took a short hiatus in 2014 and returned in 2016, thoroughly revitalised with a contemporary new look. And this sleek and modern version of the Air-King is where our story begins.

Paying homage to the golden age of aviation with even greater design impetus, the Air-King of today is best recognised by its unmistakable dial. Set against black lacquer, the dial brandishes large Arabic numerals at the ‘3’, ‘6’ and ‘9’ positions with a prominent minute scale with five-minute intervals framing its circumference. 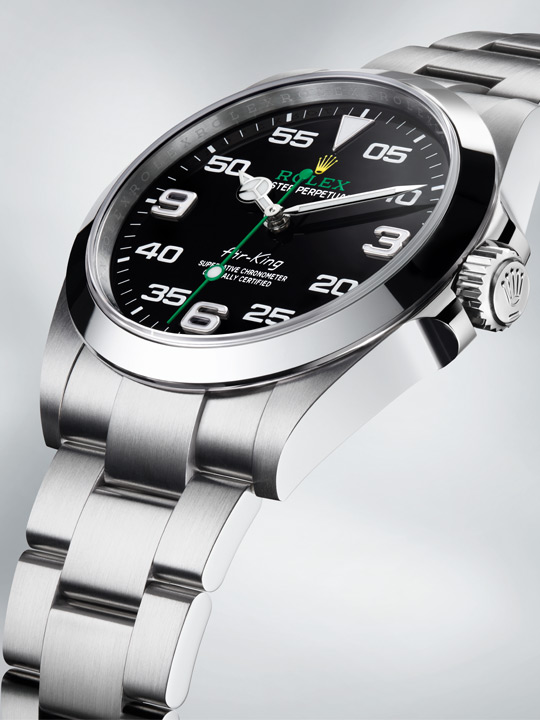 To make things pop, the Rolex name and crown logo are rendered in green and yellow respectively, accompanied by a seconds hand that is also in green. Until today, this combination of tool watch-style markers and subtly arresting colours has never been replicated on any other Rolex models, making the Air-King aesthetic truly inimitable. Even so, as this year’s model demonstrates, there is always room for meaningful switch-ups.

Like many Rolex fans, we are tempted to put the 2016 and 2022 versions of the Air-King side-by-side to play spot the difference. Truth be told, the exercise can prove rather challenging.

Certainly, the easiest thing to pick out is the addition of a '0' before the ‘5’ on first marker of the minutes scale. With this change, every five-minute interval on the latest Air-King is now marked by two digits. It seems strange that Rolex didn’t implement this design right away on the 2016 model, as the dial on the new version looks more balanced and congruent. 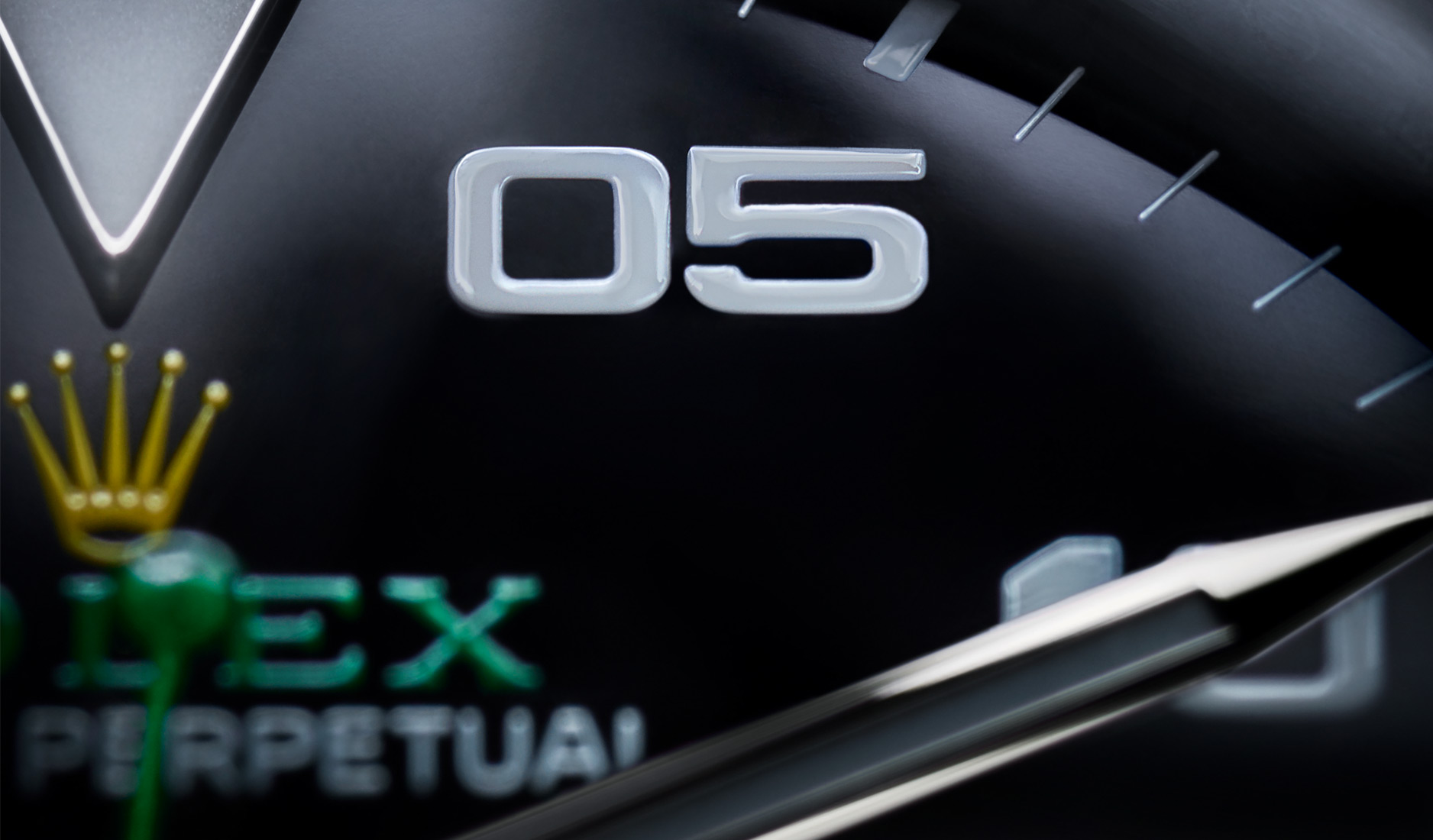 Less obvious, though, is the addition of Rolex’s optimised Chromalight display, which it introduced in 2008 and improved on in 2021 (hence the ‘optimised’ prefix). A luminescent material that emits a powerful blue glow in the dark, optimised Chromalight is said to glow even longer and more intensely in the dark, while brandishing a brighter white hue in daylight. On this year’s Air-King, the hands and triangular hour marker at 12 o’clock, as well as the ‘3’, ‘6’ and ‘9’ numerals benefit from greater legibility by being filled or coated with optimised Chromalight. 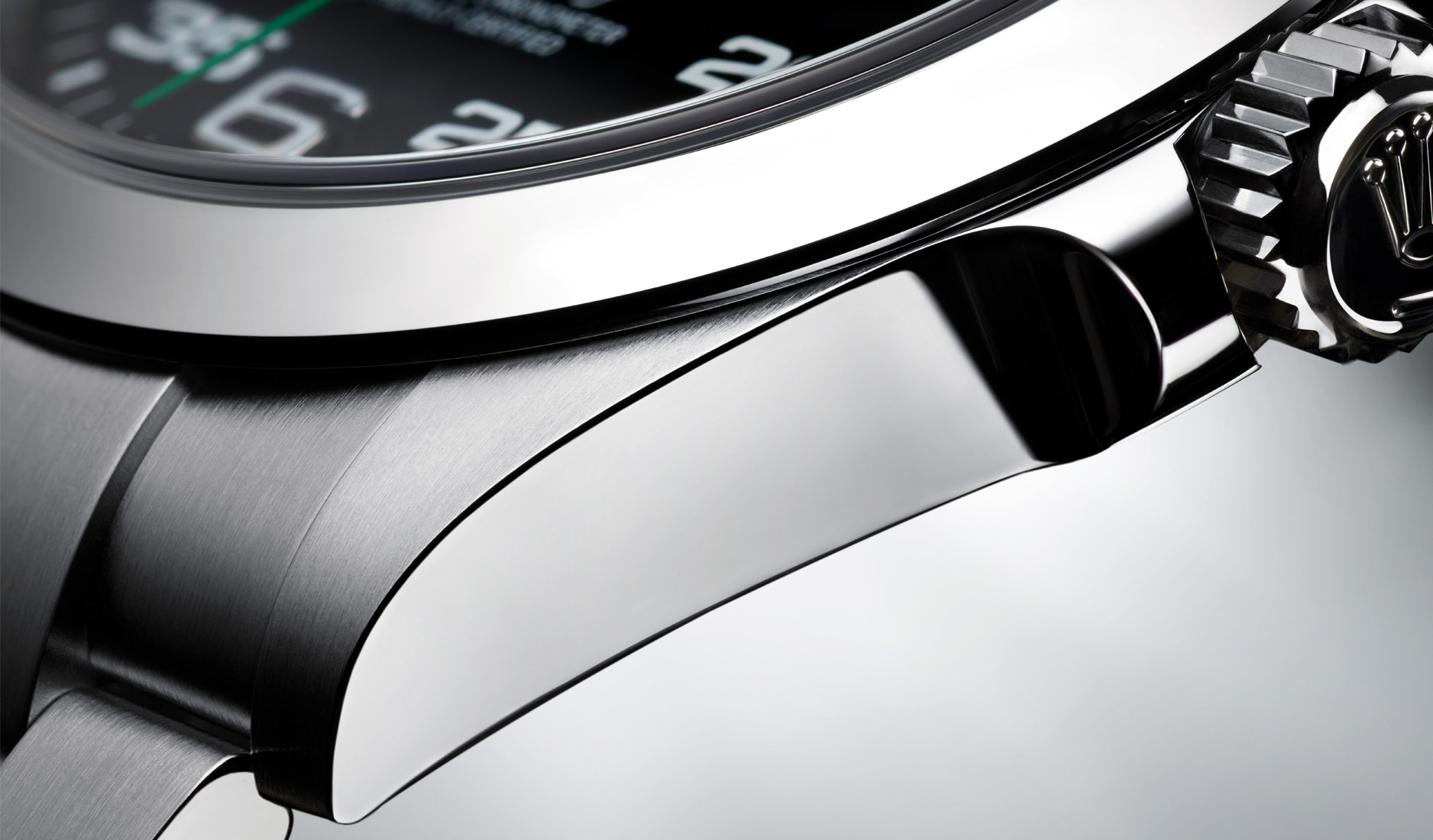 Likewise, the rest of the aesthetic tweaks on the latest Air-King are better ascertained up close. The redesigned 40mm steel case now comes with a crown guard and straight sides for a look that is more aligned to the watches in Rolex’s Professional collections, of which the Air-King is a part of. The watch’s Oyster bracelet, too, undergoes a slight transformation. It now features broader middle links for more a proportional look and fit, as well as an Oysterlock safety clasp for the first time. A folding safety clasp, the Oysterlock safety clasp is distinguished by its cover and an additional safety catch that prevents accidental opening. 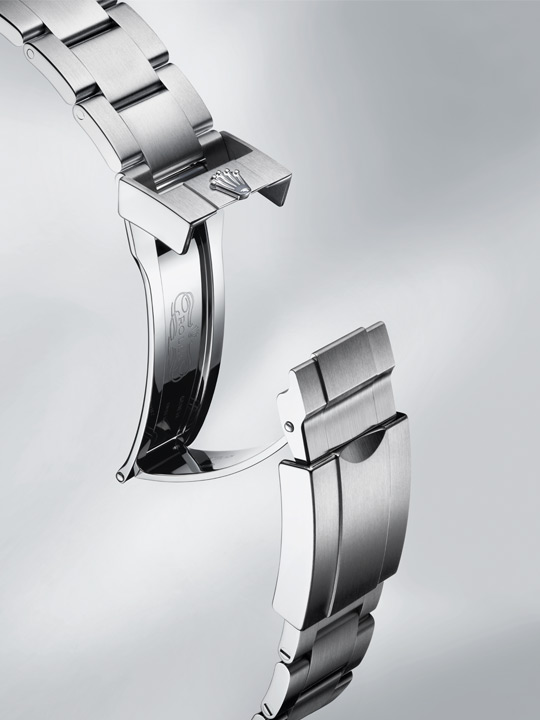 But perhaps the most noteworthy change to the Air-King – and one certainly that will go unnoticed to the casual observer – is its new engine. The automatic Calibre 3130 from the 2016 model, which had been a part of Rolex’s movement line-up for over two decades, is now replaced by the automatic Calibre 3230.

The Calibre 3230 adds considerable juice to the Air-King’s performance. Introduced in 2020, the movement boasts a host of Rolex-patented innovations such as Chronergy escapement that improves energy dispersion and rate regularity, high-performance Paraflex shock absorbers, and blue Parachrom hairspring that is up to 10 times more precise than a conventional hairspring in case of shocks. The Calibre 3230 also promises up to 70 hours of power reserve, up from 48 hours offered by the Calibre 3130.

Arguably the most stylistically balanced model in Rolex’s sports-inspired Professional line-up, the Air-King is a carefully calibrated combination of sportive elegance and tool-watch machismo. Imbued with numerous subtle but significant upgrades that Rolex, true to form, makes no apologies for, the latest Air-King again shows that it has always been more of a scene-setter than scene-stealer. And, to us, that’s a rare quality for a watch to have. 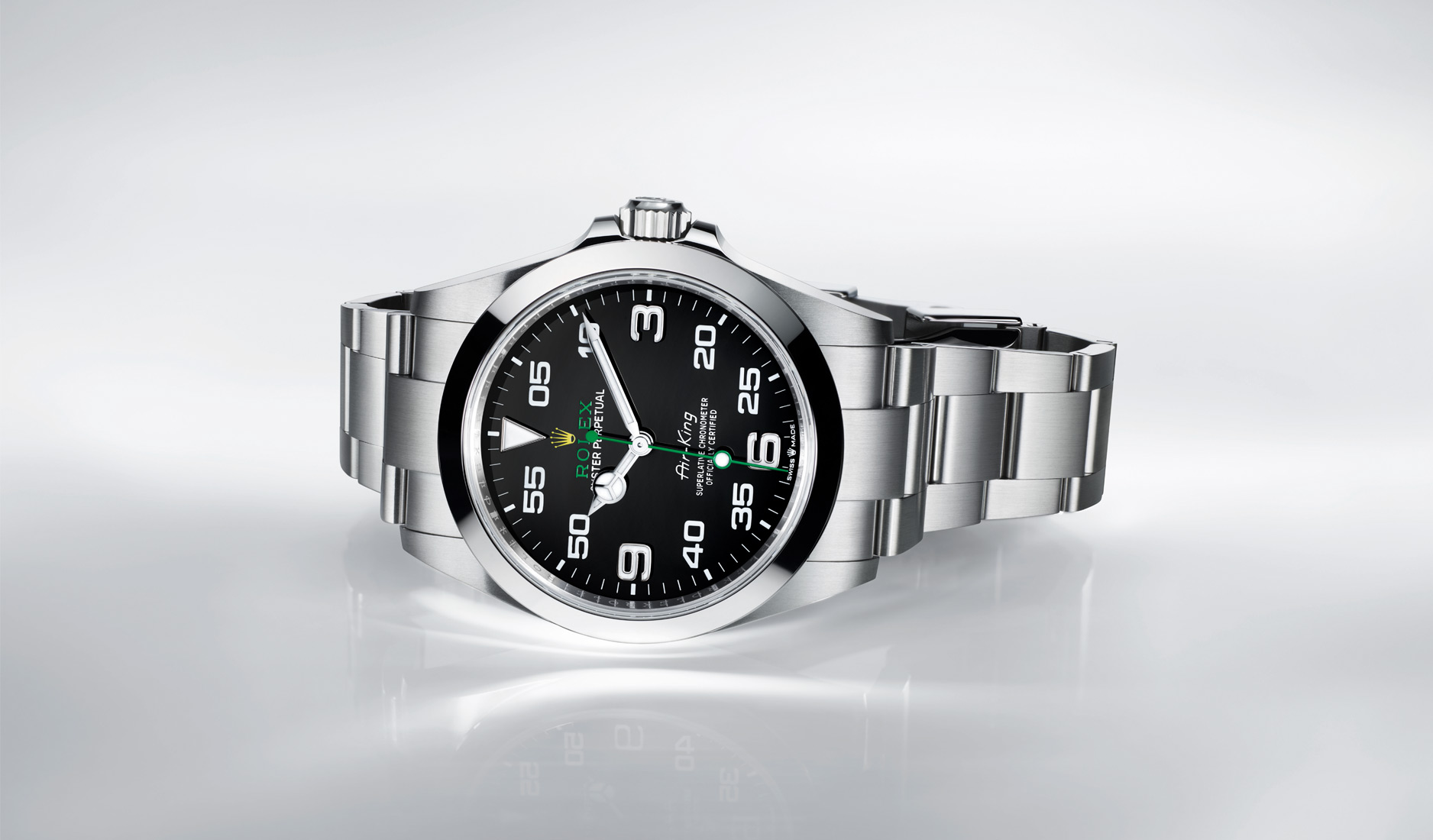