Bronze is the new black. 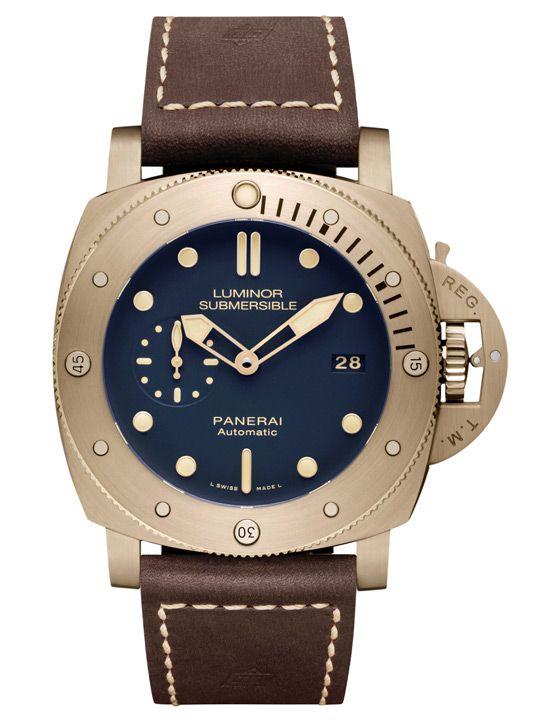 Since Panerai first thrilled fans with the introduction of the Bronzo in 2011, and then repeated the feat in 2013, adding a new power reserve indicator on the dial, it’s clear bronze has paid off handsomely for the brand. Both models flew off the shelves soon after they were launched and it shouldn’t be a surprise if this year’s model follows suit.

While it has netted a significant fan base in recent years, with more than a handful of watchmakers rolling out bronze offerings, the material itself can be polarising.

Bronze is known to attain a patina over time due to the natural process of oxidation. This means the material takes on a slightly grimy, aged look. Therein lies the conundrum—do you want your watch to look new for as long as possible or have it acquire a worn look that adds character?

For fans of the latter, the new Luminor Submersible 1950 3 Days Automatic Bronzo checks all the right boxes. For one, the bronze case immediately distinguishes the watch from the rest of the tickers in Panerai’s fold, which are predominantly in steel. Over time, the case will age with a beautiful sheen to lend the watch a vintage mien, perfectly complemented by the chocolate brown calf Ponte Vecchio leather strap. And in a departure from the first two Bronzos which had olive green dials, the new version comes in an alluring blue that references the marine depths.

True to its diving roots, the Submersible Bronzo is an underwater beast. The distinct hue of the case is credit to an alloy of copper and pure tin, which makes the ticker highly resistant to the corrosiveness of seawater. In addition, the unidirectional rotating bezel features a graduated scale (above) for calculating the time of immersion. This is done through a Panerai-patented system that ensures the accuracy of each click. And for added water-resistance, the iconic Luminor bridge device (below) lightly pushes against the crown to keep it firmly pressed against the case.

Powering this watch is the Calibre P.9010 which we first saw last year in the Luminor 1950 series. Entirely developed in-house, the automatic movement features a 72-hour power reserve, date at three o’clock and trademark small seconds counter at nine o’clock. There’s also a mechanism that allows you to adjust the hour hand in one-hour increments while stopping the balance wheel so the running of the watch is not affected. Measuring 6mm in height, the movement is thinner than the 7.9mm Calibre P.9000 used in certain Luminor 1950 and Radiomir models.

The new Submersible Bronzo comes in a limited edition of 1,000 so if you want a piece of the action, ring your nearest Panerai boutique pronto.