This is what a proper space force looks like.

Man’s daring voyage to the moon half a century ago is not one that will easily be forgotten or quickly relegated to the history books. And neither will the watch that accompanied him there.

This year, Omega celebrates the 50th anniversary of the moon landing with a limited-edition model that recreates the famous Speedmaster BA145.022 given to the astronauts after the successful Apollo 11 mission that took them to the moon and back. Think of it as the original 1969 watch but super-charged with impressive upgrades.

First off, the Speedmaster Apollo 11 50th Anniversary LE is clad in a 18K gold alloy the brand has christened, ‘Moonshine gold’, a cheeky moniker that, to us, evokes prohibition-era brews. That’s not the case, of course. Moonshine gold, in Omega's case (pardon the pun), is  inspired by the glow of the moon in the night sky, resulting in a more subdued hue than regular 18K yellow gold. And how apt that a watch celebrating the moon landing should radiate with the same moonlit sheen? 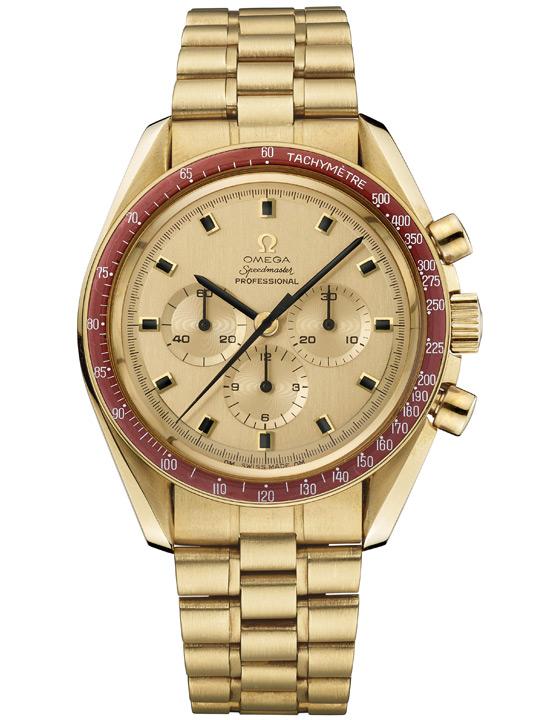 While the original model (above) sports a distinctive anodised aluminium bezel in burgundy, the new version comes with a modern material watchmakers love—ceramic. In the same burgundy tone, the new ceramic bezel comes with scaling in Omega’s proprietary Ceragold, compared to the original, which featured scaling in metallic grey.

The new minute track uses a chrono division of three per second, in accordance to the frequency of the movement. This is an update from the original, which was five per second and not according to the movement’s frequency.

Inside the watch beats the spanking new Master Chronometer Calibre 3861, an anti-magnetic movement that’s an improved version of the original Calibre 861. The METAS-certified manual-winding movement features Omega’s famed Co-Axial escapement, a silicon balance spring and Moonshine gold-plated mainplate and bridges, complemented by burgundy markings. All this can be clearly seen through the sapphire caseback, unlike the original, which came with a closed back featuring commemorative text. 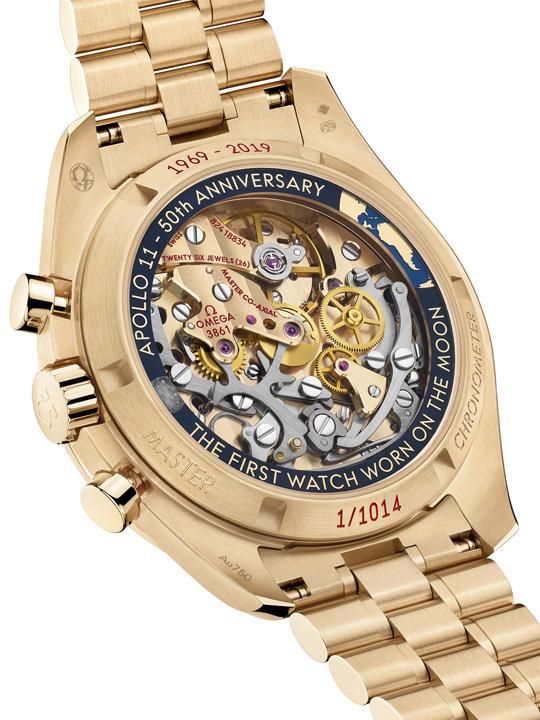 It’s a brilliant move, too, because the calibre looks absolutely stunning, largely thanks to the stunning gleam of the Moonshine gold. But what we really like on the caseback are the partial world map in Moonshine gold and blue PVD, showing the view over Cape Canaveral (where Apollo 11 launched), as well as the domed lunar meteorite (depicting the moon) on the opposite side, set into the ring cavity. Astronomy geeks will be pleased to know both the earth and moon are produced to scale relative to each other. 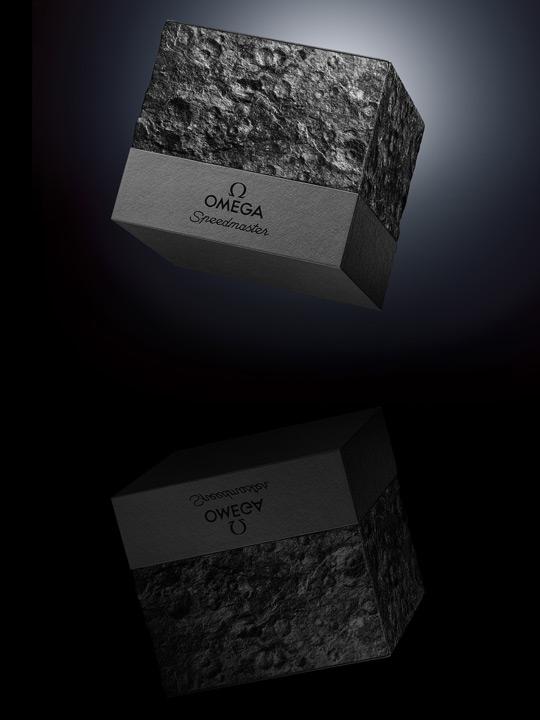 Elements that have been retained include the vertically brushed dial, onyx markers and bracelet design (five arched links in a row). Like the original, 1,014 pieces have been produced. Each is numbered and will be presented in a crater box inspired by the original packaging of the 1969 version. Each panel of the box comes in grey ceramic and will feature a unique 3D-printed surface of the moon, so no two boxes will be alike. In addition, the top panel will feature the landing position of Apollo 11—a fantastic reminder of Man’s greatest lunar escapade.