To say this has been a momentous year for Omega would be a huge understatement. Straight from the get-go, the brand has been marching out winners on all fronts, with something for everyone.

History buffs were treated to a trilogy of Speedmaster, Railmaster and Seamaster re-issues, thanks to the collections’ 150th anniversary. Meanwhile, social media devotees went wild with excitement over the Speedy Tuesday limited edition piece, which sold out just hours after its launch. Ladies weren’t forgotten either, with the appropriately-sized Speedmaster 38 for smaller wrists (watch our video review here).

While all this was taking place, another collection also marked a significant anniversary (no, we’re not even talking about the DeVille’s 50th). The Seamaster Aqua Terra turned 15 this year in a relatively quiet manner. Until now, that is. 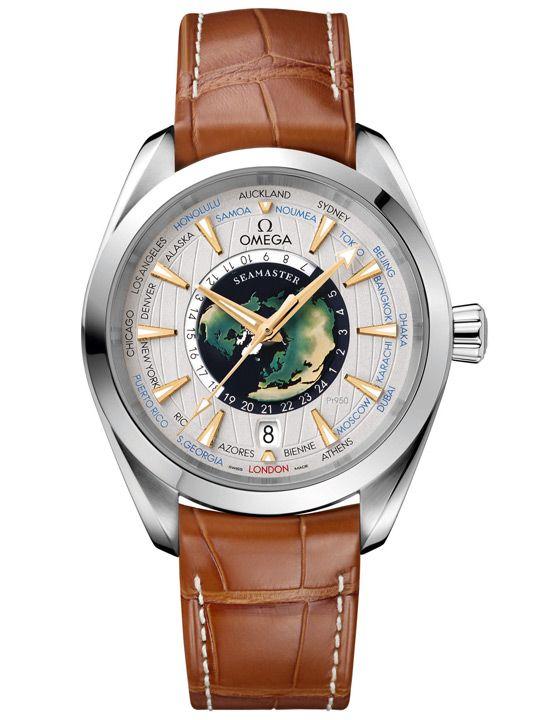 As if to show the collection is no wallflower, Omega chose to debut its first worldtimer in the new Seamaster Aqua Terra Worldtimer Master Chronometer Limited Edition. That’s not all: the watch also proudly displays breathtaking enamel work right smack in the centre of the dial, depicting a view over the North Pole. 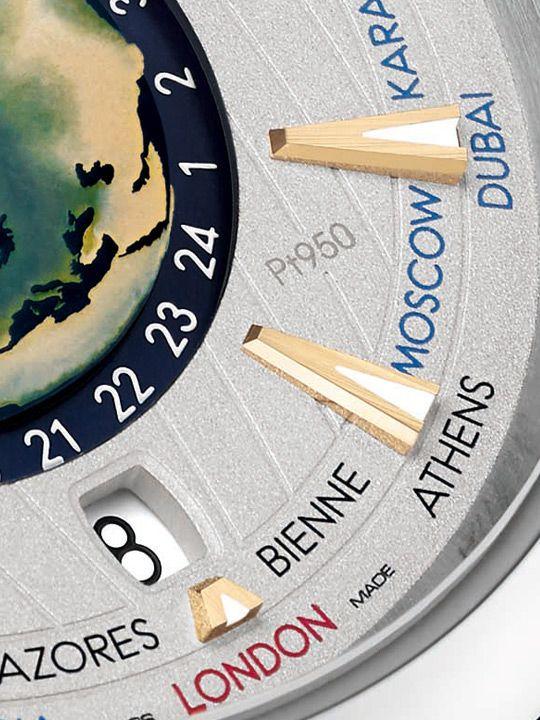 Right from the outside, Omega has taken pains to endow the watch with a sense of gravitas. The exterior is sand-blasted platinum-gold with a mix of polished and brushed surfaces, while the 18K yellow gold raised indexes (above) and hands are clothed in Super-LumiNova. Global city names encircle the perimeter of the dial with ‘London’ in red, representing GMT and destinations without daylight savings in blue. Cities that advance an hour during summer are indicated in black—one of them being Omega’s hometown of Bienne, added to the dial for sentimentality.

When it comes to the world map, Omega gets innovative. While enamel in watchmaking is usually applied on brass, this one is applied on a sapphire disc, which allows for five layers of enamel to be applied, depicting the gradients on the continents with even greater vividness. Surrounding it is a 24-hour ring with day/night indication. 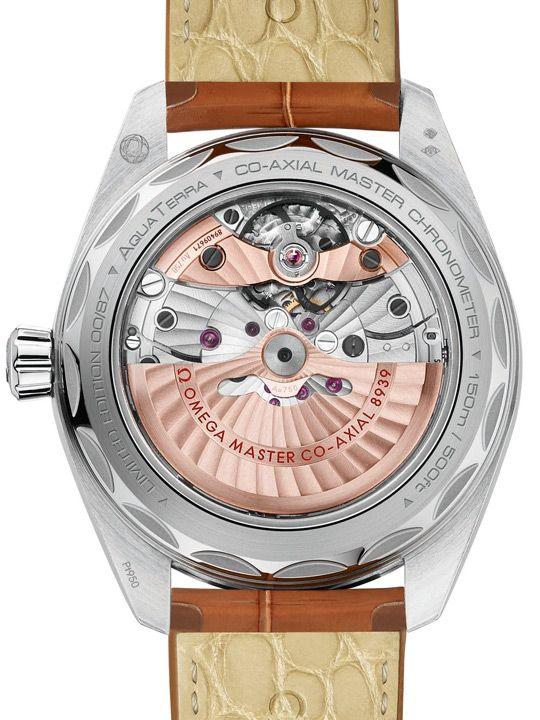 In line with the other new Aqua Terra models, the Worldtimer has a symmetrical dial with a date window at six o’clock and conical winding crown. It also features twisted lugs, which reference the Speedmaster Moonwatch and second-gen Seamaster 300. On the reverse, the caseback has a wave-edged design (above)—a nod to the collection’s nautical heritage.

Inside, the watch is equipped with the METAS-certified Master Chronometer Calibre 8939 which, like the new Aqua Terra models, has a guaranteed magnetic resistance of up to 15,000 gauss. Omega is fastidious about its anti-magnetic capabilities and, in an experiment done last year, subjected a prototype Seamaster Aqua Terra to a staggering 160,000 gauss. Needless to say, the watch performed perfectly before and after exposure to the magnetism. So while Omega guarantees anti-magnetism up to 15,000 gauss, it is actually capable of much more.

Limited to just 87 numbered pieces, the watch is finished with a tobacco-hued leather strap and platinum-gold deployant clasp, making it extremely wearable and straddling the formal/casual divide expertly. As the brand’s first worldtimer, this is a significant piece and certainly one for the history books.