A vision in red.

It might come as a surprise but the Omega you know today wasn’t always named Omega. Established in 1848, the original company was founded by Swiss watchmaker Louis Brandt. It was only after his sons, Louis-Paul and César, took over that the company would make its journey towards becoming the brand we know today.

In 1894, the brothers unveiled a revolutionary new movement, the 19-ligne calibre, which won acclaim for its high accuracy and innovative technology where every component in the mechanism could be replaced without any changes by any watchmaker. It also debuted the now-ubiquitous method of winding the watch and setting the time through the crown and winding stem.

To mark their achievement, the Brandts christened their new movement, ‘Omega’, as they felt it was the final word on watchmaking success, just like it’s the last letter in the Greek alphabet. Nine years after the Omega calibre was launched, the company took on its name and was registered as Omega Watch Co. 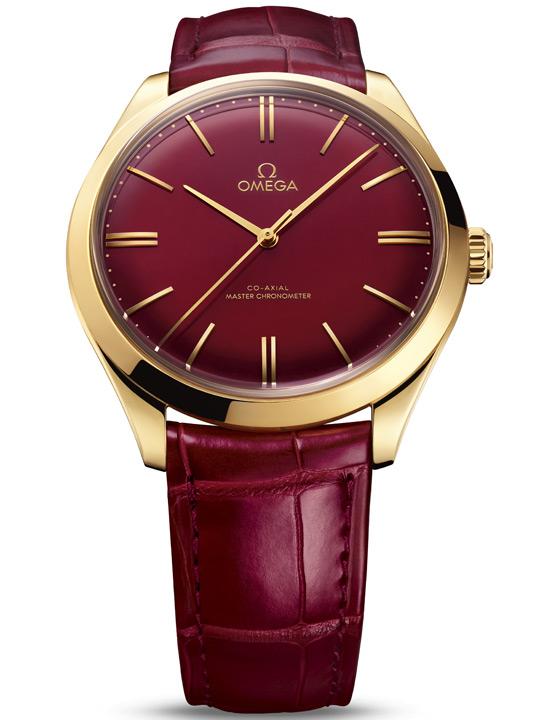 In a nod to the year that all-important calibre was born, Omega has launched the new De Ville Trésor 125th Anniversary Edition. Dressed unabashedly in the watchmaker’s signature red, the De Ville Trésor is all pomp and pageantry with an 18K yellow gold case and a gorgeous red domed enamel dial—a first in the brand’s history.

But it doesn’t stop there. Flip the watch over and you’ll see an 18K yellow gold medallion filled with more red enamel. Emblazoned on the back are the words, ‘Omega 125 years’ as well as the logo and ‘19’’’’, an abbreviation of ‘ligne’. As a further tribute, the caseback also features damaskeening, a decorative pattern of swirls used in the earliest 19-ligne movements.

The De Ville Trésor 125th Anniversary Edition comes hot on the heels of Omega’s decision to relaunch another iconic movement, the Calibre 321, which was the first chronograph movement used in the Speedmaster 1957. The brand also has plenty to celebrate, not just with the 125th anniversary of its name but also the 50th anniversary of the Seamaster collection.

With so much going on, it certainly looks like a busy year ahead for Omega and we can’t help but wonder if the different new products will be lost in the flurry of activities. But looking at the De Ville Trésor 125th Anniversary Edition again, it’s safe to say this one’s a veritable show-stopper.