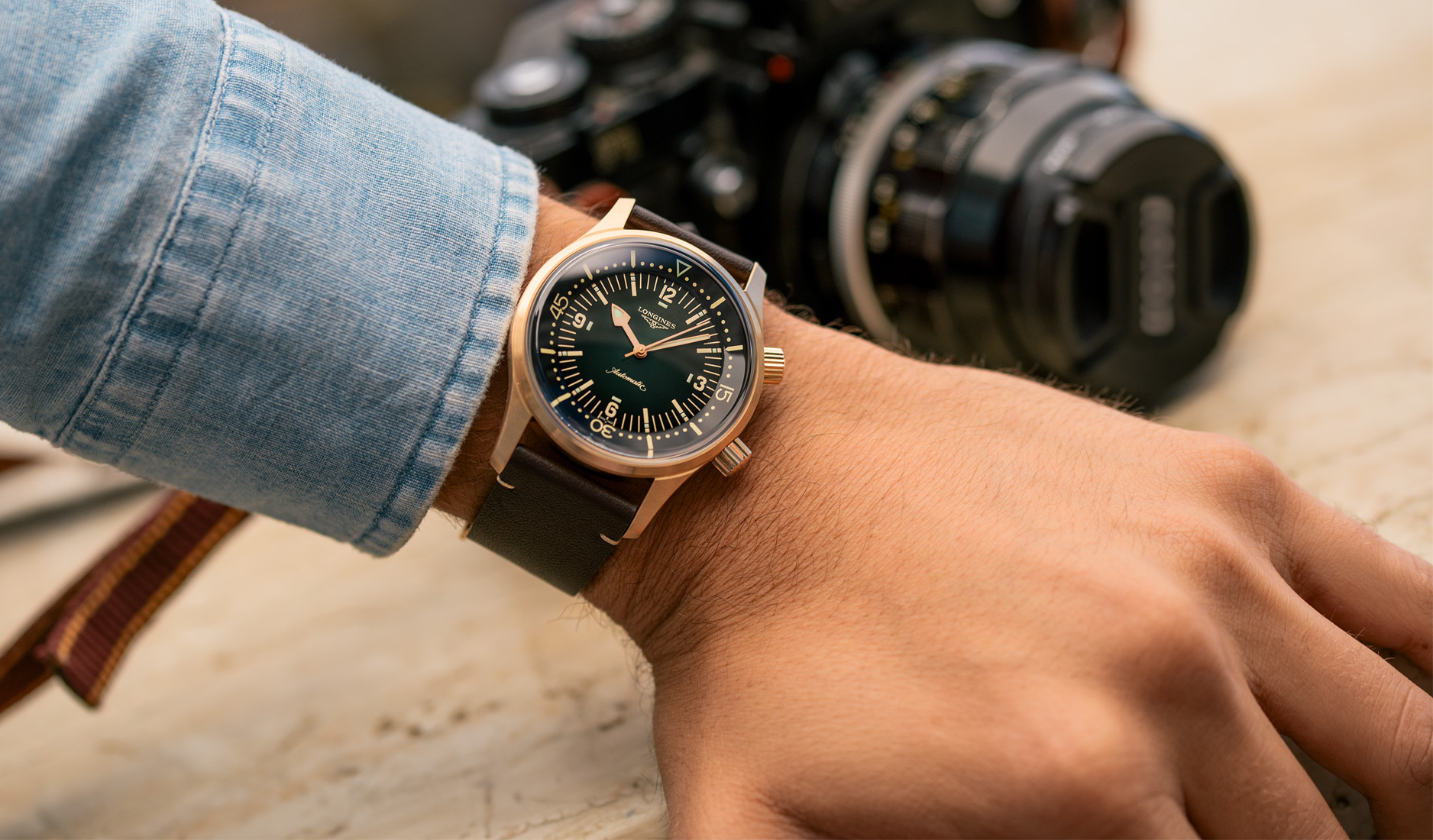 Among the many brands attempting to capitalise on the surge in demand for vintage-inspired watches in recent years, Longines has managed to hit the mark more often than most. Its success, evinced by its hugely popular Heritage watches, is down to two things: an extensive and authentic back catalogue from which Longines gets its inspiration, and a design team that understands the power of a light touch when reworking archival models.

Based off a dive watch from the 1960s, the Heritage Legend Diver watch is a faithful rendition of the original. The historic model’s case profile and silhouette, marked by two crowns on the right (one for winding and time-setting, and another for setting the inner rotating bezel), along with details like the arrow shaped hour hand, stylised indices, positions of the Longines’ winged hourglass logo and ‘Automatic’ descriptor at the top and bottom halves of the dial, respectively, have been meticulously reinstated on the new versions. 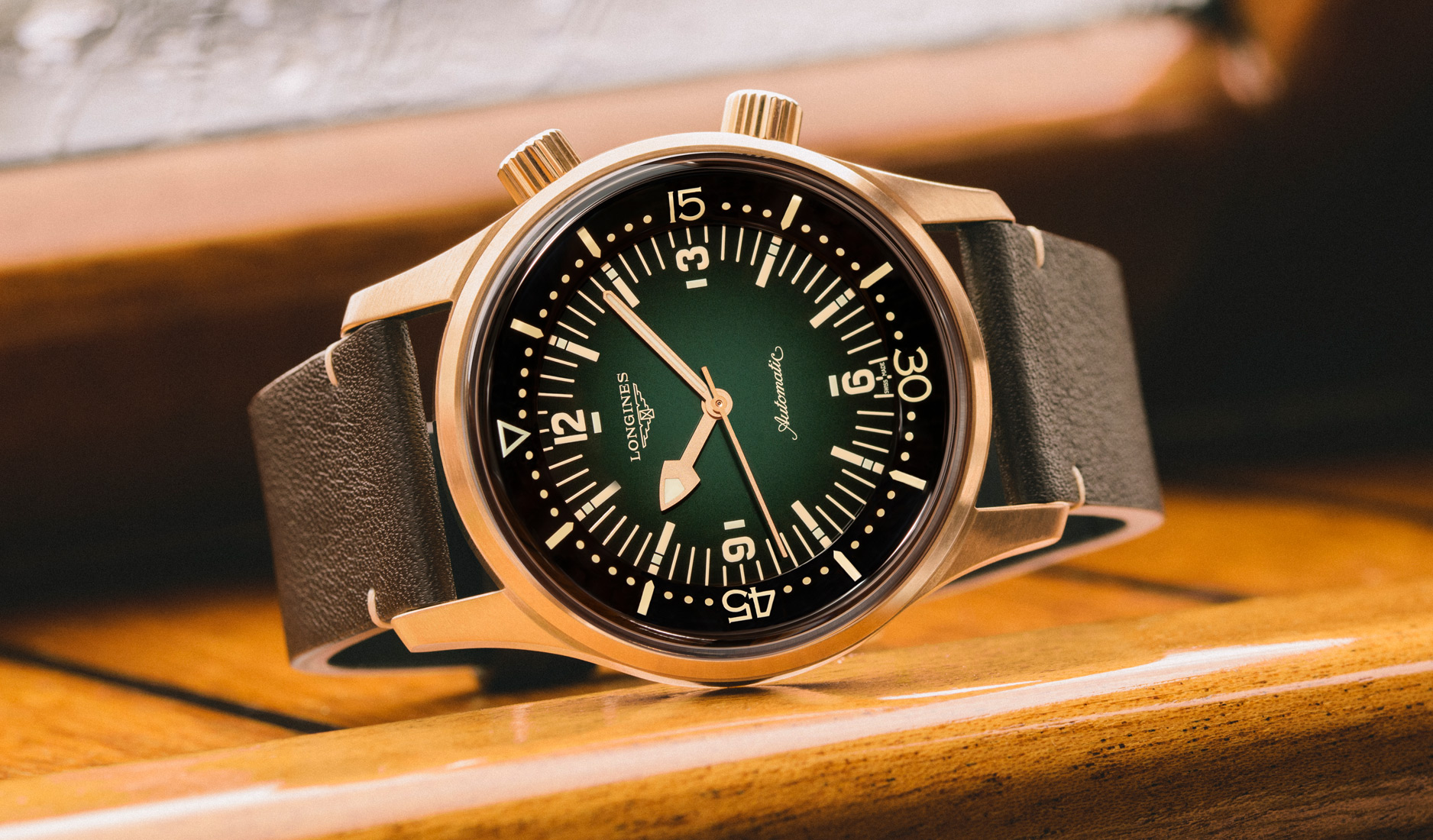 Prior to the latest bronze variant, the Heritage Legend Diver came in 42mm or 36mm steel cases with black lacquered dials, sporting a look that defers to the original. An exception is the all-black version in black PVD-coated steel from 2019, which lends the watch a contemporary demeanour. While sleek and sexy, the black Heritage Legend Diver is admittedly a bit of a departure from the collection’s ‘heritage’ themed DNA. 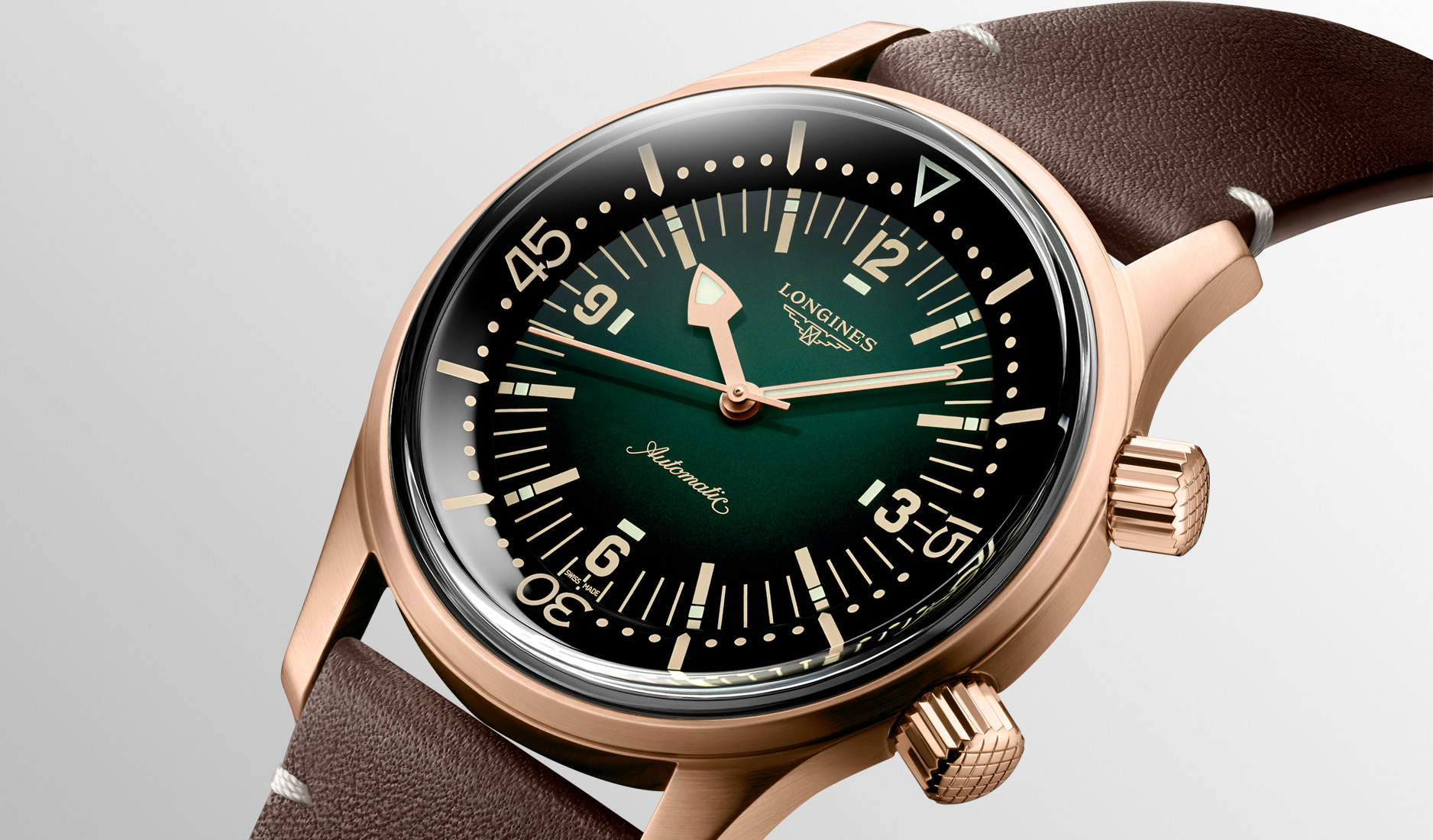 Given that, the Heritage Legend Diver Bronze offers a sweet spot by bridging both the past and present. Housed in 42mm bronze, an alloy comprising copper and tin that’s often used for marine equipment hardware, the watch’s nautically inspired origins and spirit comes to the fore. The material also acquires its own patina after exposure to the elements. As such, the Heritage Legend Diver Bronze will eventually evolve into a timepiece that is wholly unique its owner over time. 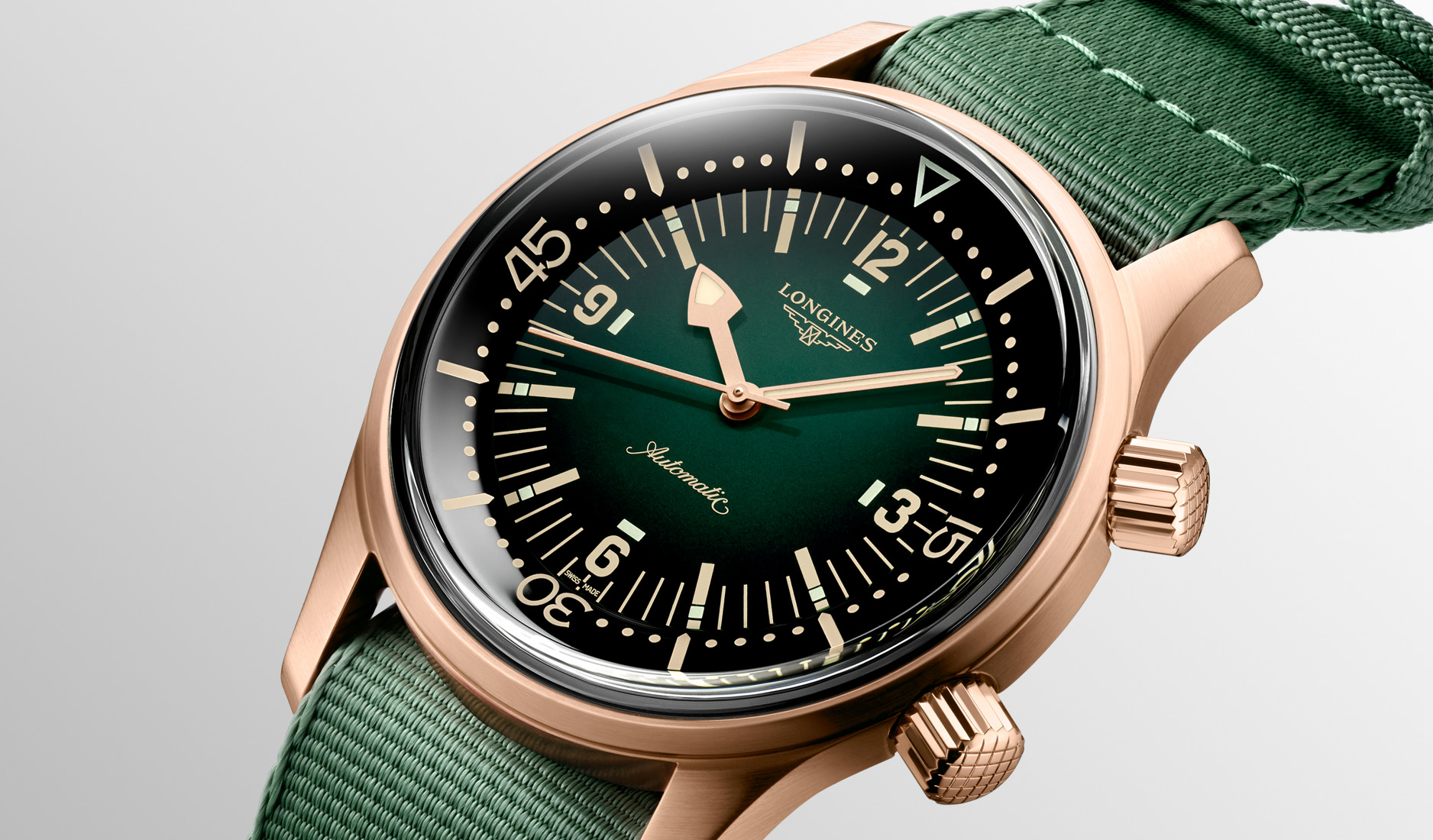 The case’s warm sheen is complemented here by a gradated green dial with Super-LumiNova hands and indices, and the watch is delivered with two strap options – green NATO or brown leather with beige top stitching. It is a lovely amalgamation of colours, tones and styles that make the Heritage Legend Diver Bronze the liveliest variant yet in the line-up.

As delightful as the Heritage Legend Diver Bronze’s aesthetics are, one should not overlook its performance specs and engine. Water resistant to 300m, the watch is encased in a domed sapphire crystal with multiple layers of anti-reflective coating for optimum legibility. On the inside, the watch runs on an ETA-based automatic movement with silicon hairspring and promises up to 64 hours of power reserve. To cap the deal, the Heritage Legend Diver Bronze is covered with a five-year international warranty. More than enough years, we believe, for the watch to be made indelibly yours with its time-hewn patina. 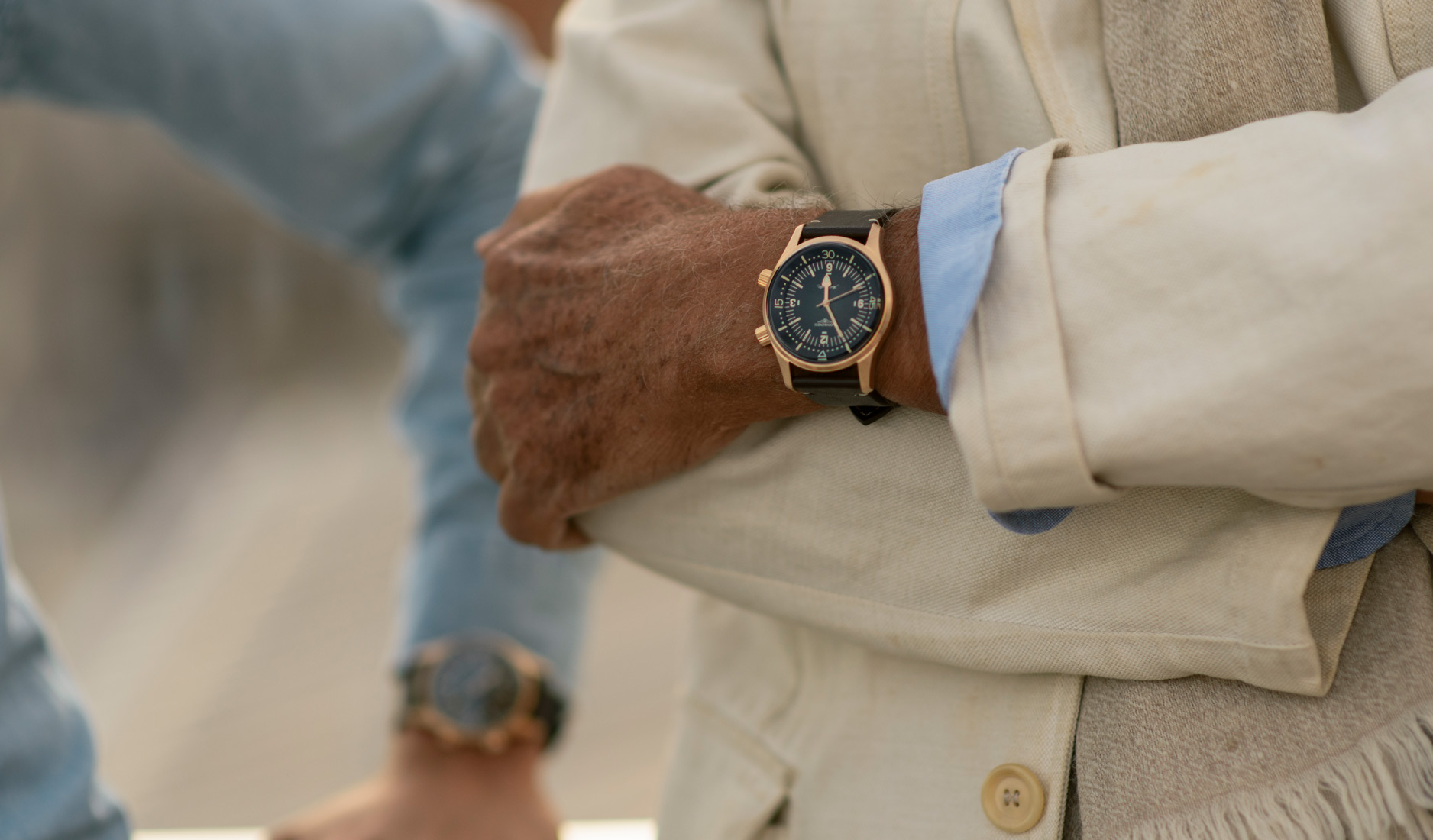