Rock the Year of the Rooster with an appropriately-themed ticker.

When it comes to the Chinese zodiac, you can expect writers to go crazy with puns on the animal of the year (“time to monkey around”, anyone?), but we’ll try to avoid that and keep the focus on what’s really important— the timepiece. Not that it’s difficult with Jaquet Droz, of course. The La Chaux-de-Fonds marque is renowned for its superb artistry and never fails to impress with breathtaking decorative dials.

For 2017, Jaquet Droz gives us their interpretation of the Fire Rooster: two versions of exquisite craftsmanship on the iconic Petite Heure Minute dials — the perfect canvas with their expanse of space. Both versions are limited to 28 pieces and heavily reference Chinese art, with the first bringing to mind Chinese calligraphy and watercolour painting. 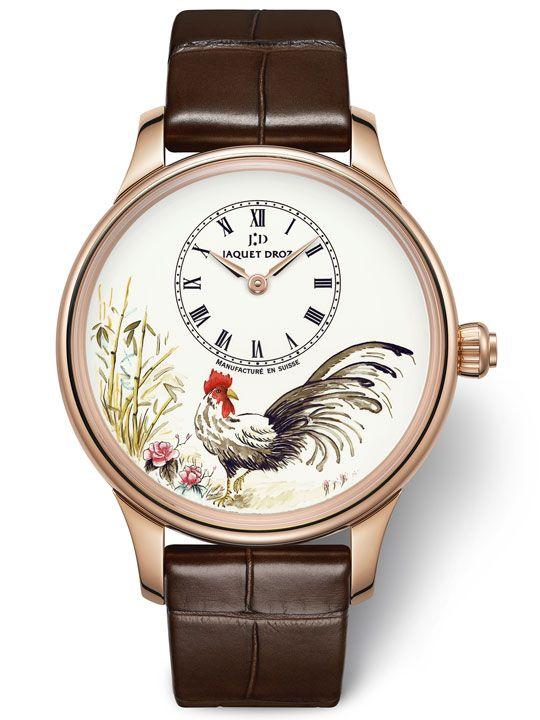 Featuring a delicately painted rooster, peonies and bamboo on a Grand Feu enamel dial, this tribute to miniature painting is based on a discipline handed down from the Enlightenment masters and requires great dexterity from the artisans, with each dial being truly unique. CROWN had a sneak peek at the process during a visit to the Jaquet Droz manufacture last month, where an artisan showed us a set of work-in-progress, custom-made dials commissioned by a wealthy collector, which brandished the same technique. The artisan remarked that the Chinese watercolour effect had taken several months to get right.

The men’s version (above) is housed in a 39mm red gold case, while the ladies get the bonus of diamond-encrusted bezel and lugs in their 35mm model (below). 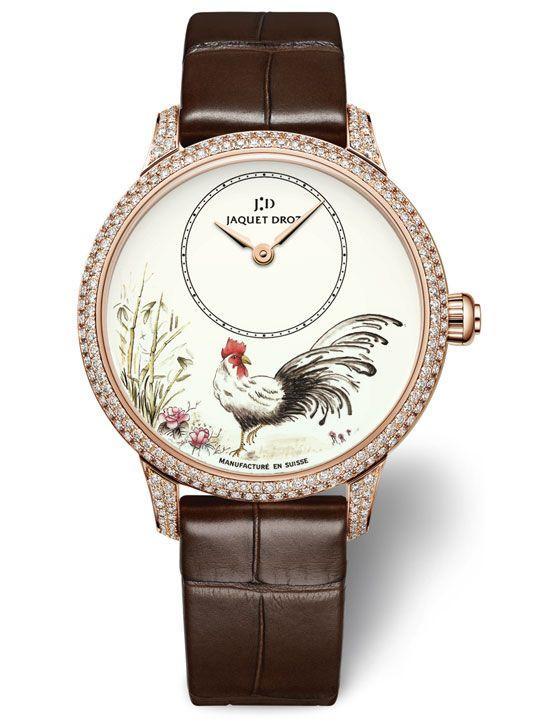 The second version (below) harnesses the miniature sculpture technique with a beautifully carved rooster in red gold against a dial inlaid with jadeite and mother-of-pearl. Chiselled with precision, it’s incredible to see the level of detail accorded to the rooster, achieved only through the master craftsmen’s years of experience. The dial is then patinated and hand-painted in monochromatic hues to give added depth and realism to the artwork. 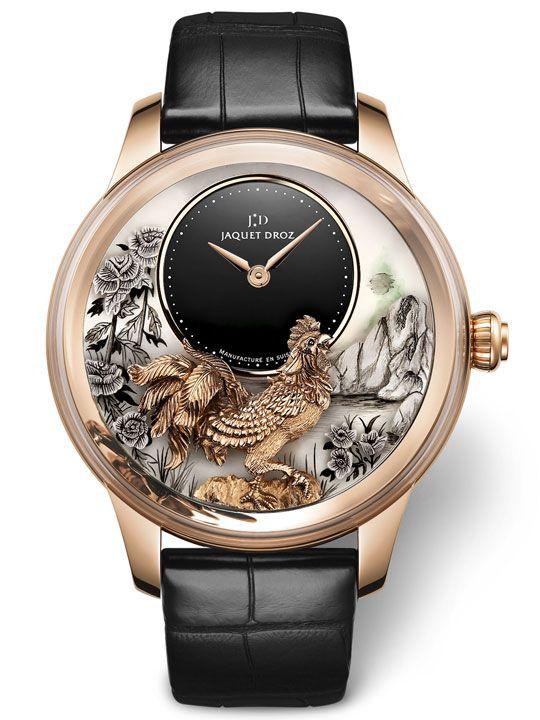 In addition to the two versions, Jaquet Droz also presents a limited edition of eight hand-painted pieces (below) where the rooster’s feathers are dressed in realistic hues of reds, oranges and blues, against the backdrop of a misty black and white landscape with rugged mountains and delicate peonies. Two hundred and seventy two diamonds on the case complete the look. The attention to detail is repeated on the gold rotor which is engraved, patinated and embellished with jadeite. 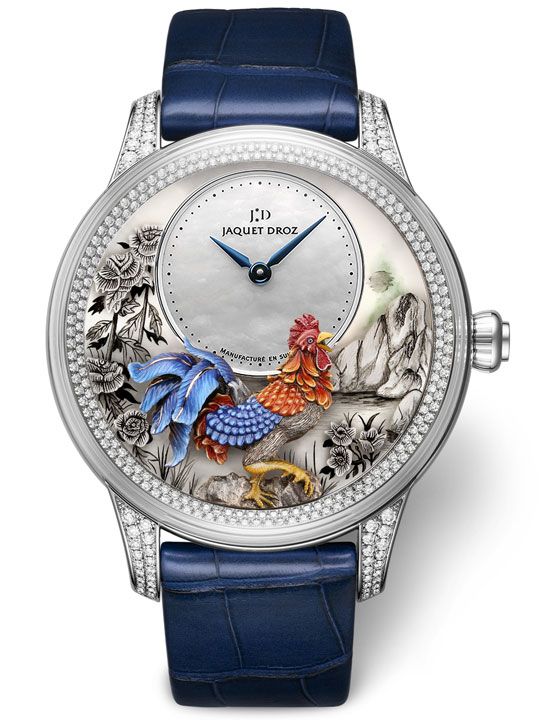 What we like about this collection is that, much as the artistry is spectacular, the engine is just as noteworthy. Equipped with a double barrel movement based on the Jaquet Droz 2653 that also powers the rest of the Petite Heure Minute collection, the ones used in the rooster collection feature a silicon escapement, which offers longer service intervals, amongst many other benefits (more on silicon technology here). The Rooster series also comes with a 68-hour power reserve so you can leave it at home the whole weekend and rock it again on Monday without having to reset the time.

Although the rooster features prominently on the watch, it doesn’t mean you can only strap it on every 12 years. The intricacies of the dial alone make it a great talking point both in business and social situations at any time of the year. Plus, it’s just really gorgeous to look at. Now that’s something to crow about isn’t it? (Sorry, we couldn’t resist.)