A Jaeger-LeCoultre never sounded this good.

Truth be told, there are many watch complications that aren’t explicitly necessary anymore in today’s world. The tourbillon, in particular, comes to mind. Sure, back when people carried pocket watches, it was extremely useful in regulating a movement that would have had its accuracy compromised by gravity. But on a wristwatch? One might even consider it superfluous.

Then there’s the minute repeater. Before electricity was discovered, minute repeaters would chime the hours and minutes so you could tell the time even in the dark. Now that lume has been invented and we’re seldom caught in a situation without a light source, minute repeaters are less of a necessity.

But if you’re reading this, you’re probably a watch lover and know as well as we do that it’s not so much about necessity as it is about skill, craftsmanship, beauty and heritage—all of which Jaeger-LeCoultre has in spades, and is demonstrated in the new Master Grande Tradition Repetition Minutes Perpetuelle. There’s a lot to appreciate about minute repeaters. From just the chimes alone, aficionados look out for tone, clarity, resonance, amongst other things. And then, there is the movement's architecture - the way the gongs and hammers are wound and wired to get the best sound. In fact, this particular timepiece deviates from traditional minute repeater architecture, which features gongs with overlapping coils. In the Master Grande Tradition Repetition Minutes Perpetuelle, the gongs traverse both the height and circumference of the movement. What this does is maximise the available space, augmenting the timepiece’s ability to achieve maximum resonance.

Also, since the gongs are now positioned closer to more of the watch case, the resulting sound bounces off louder. In addition, the square gong cross-sections and trebuchet hammers ensure the gongs are struck with maximum impact, while minimising interference from the recoil.

Not content to just feature a state-of-the-art minute repeater, Jaeger-LeCoultre has also added a perpetual calendar to the watch, offering both form and functionality. Because perpetual calendar movements are so complex, watchmakers like to present them in a manual-winding timepiece, so that none of it is obscured by a rotor. However, it’s also because perpetual calendars have so many functions that an automatic movement would be more convenient, powering the watch whenever it’s worn. 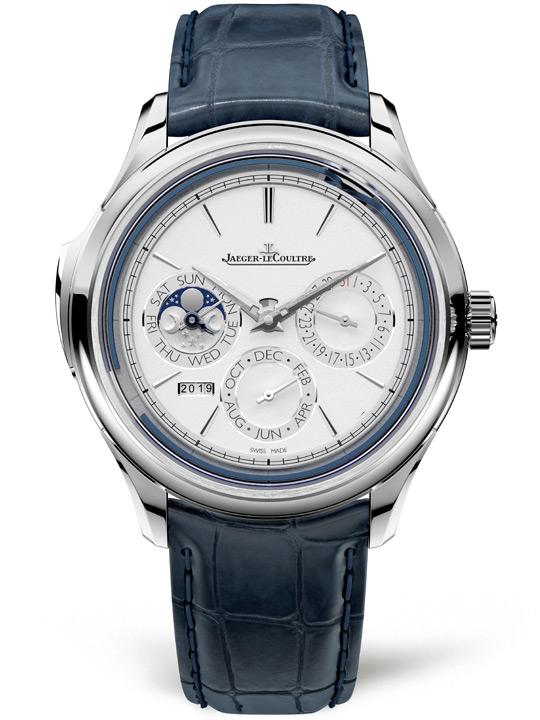 In this case, Jaeger-LeCoultre has married the best of both worlds by sandwiching the rotor between the minute repeater and perpetual calendar modules. This way, the watch is constantly powered while on the wrist, and the movement is completely visible for the wearer to admire. 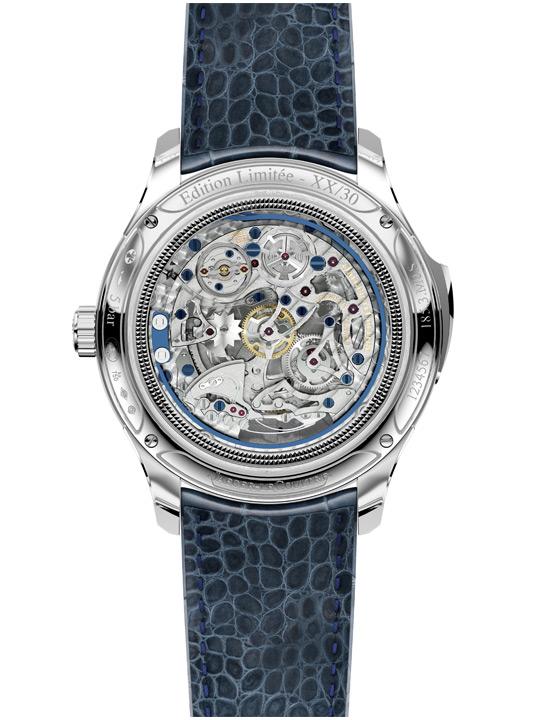 On a practical note, owners of mechanical watches should know it is not advisable to adjust the time (in this case, time and calendar) when the display is between 10 o’clock and one o’clock, due to the possibility of stressing or damaging the movement. Jaeger-LeCoultre reminds the wearer through a ‘security zone’ dial aperture at the axis of the hour and minute hands, with the indication appearing during those hours.

Available in two versions, the watch comes in a neo-classical silver-grained dial or a resplendent blue translucent guilloché enamel dial, handcrafted by artisans in the Atelier des Métiers Rares.

With the latter option, a solid white gold dial is imbued with guillochage several times, then endowed with the perpetual calendar counters, which are precision laser-welded on. The empty spaces are then filled with translucent enamel and, finally, the dial is polished to produce a shimmering blue that looks different at every angle.

To accommodate the architecture of the new Calibre 950, the watch has a higher thickness of 13.72mm. But for an automatic minute repeater with perpetual calendar that we can admire both front and back, it’s a small concession to make.