The Citizen ‘Fugu’ is back 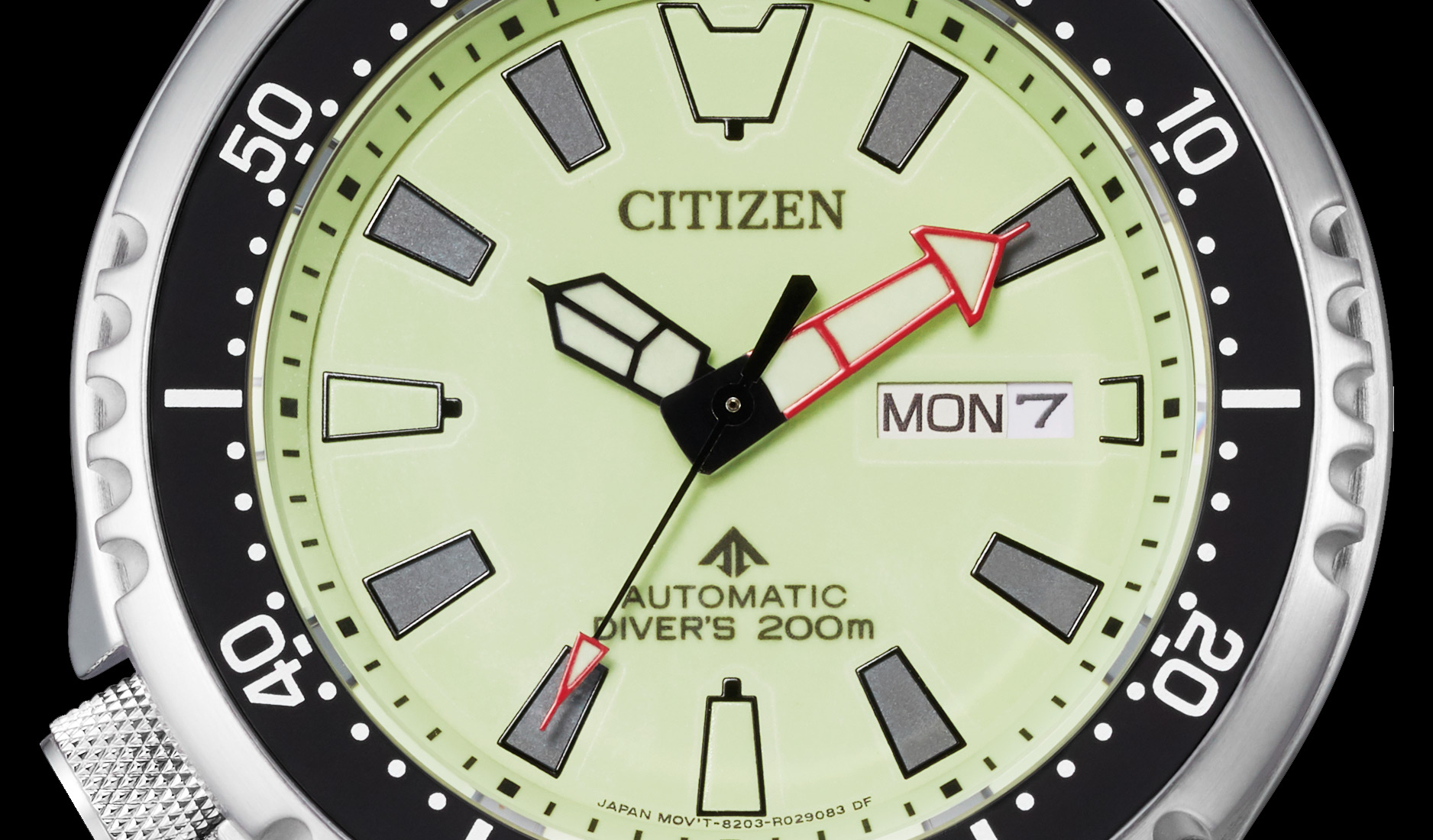 A recent success story, the Citizen Asia Limited Promaster ‘Fugu’ watches helped draw attention to the Japanese watchmaking giant’s rich history from both within and outside of the company.

Where Citizen’s modern-day repertoire is dominated by tech-heavy creations – the solar-powered Eco-Drive, Satellite Wave and radio-controlled timepieces, and ultra-robust Super Titanium watches – the Promaster Asia Limited ‘Fugu’ collection, inspired by a dive watch collection from 1989 and citizen/citizen-promaster-fugu-ny008-singapore-price-and-review" target="_blank" rel="noopener noreferrer">relaunched in 2018, evoked a desire for nostalgia and pointed watch buffs to the brand’s winsome historical archives. Even within Citizen itself, the warm reception to the revival of the ‘Fugu’ has encouraged the brand to dig deeper into its archives for more charming, retro-inspired re-issues, evinced by the new Asia Limited Kuroshio ’64, a remake of Citizen – and Japan’s – first-ever waterproof watch. 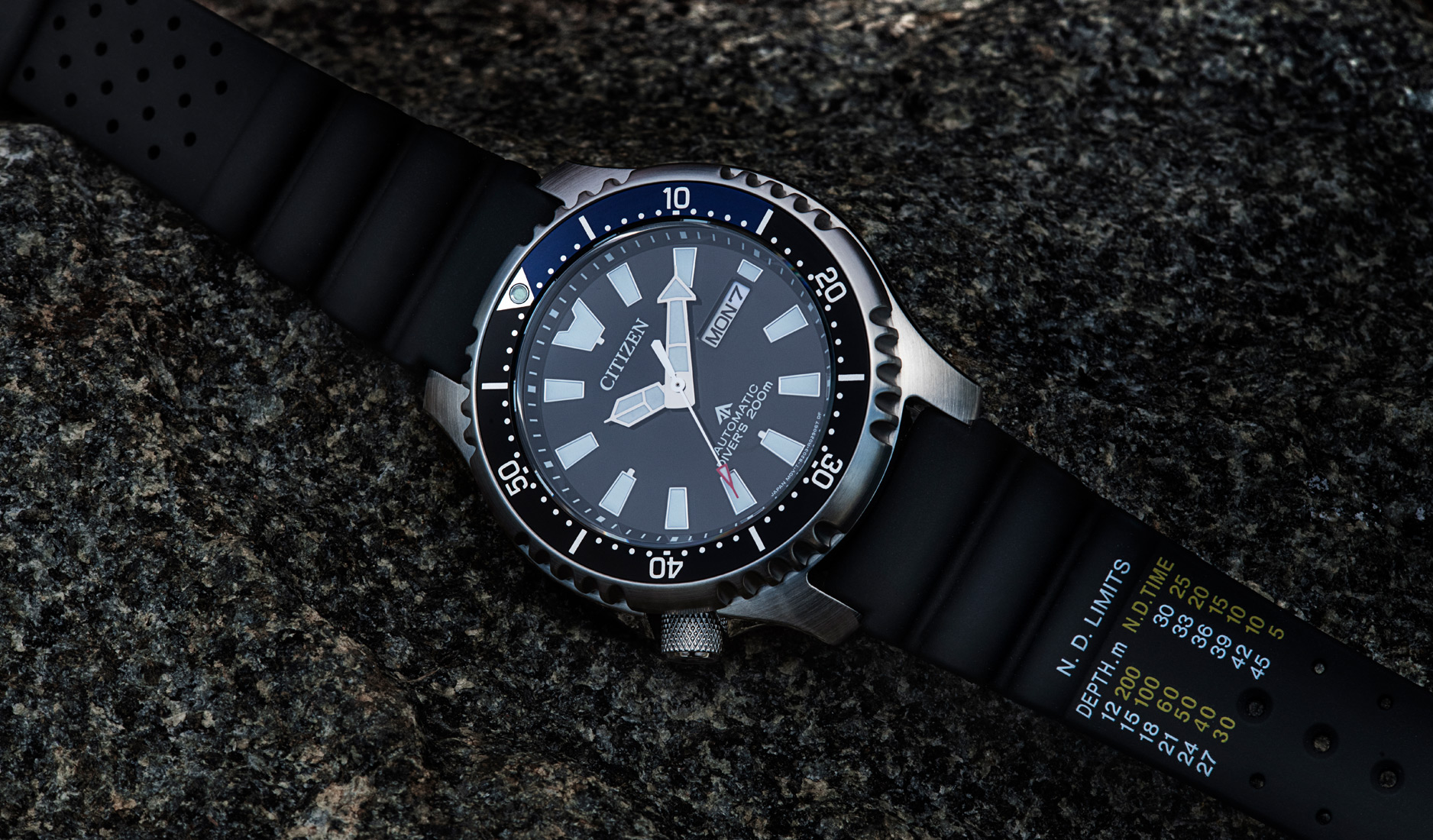 But back to the Citizen Asia Limited Promaster ‘Fugu’. We first caught a glimpse of the prototypes for the first-generation remake, the Asia Limited Promaster NY008, at Baselworld 2018, and immediately decided to get one for ourselves. The watch’s backstory (the 1989 original NY004 was issued to the Italian Navy), distinctive design with the knurled bezel and crown at seven o’clock, and attractive price tag made it an easy deal to close. 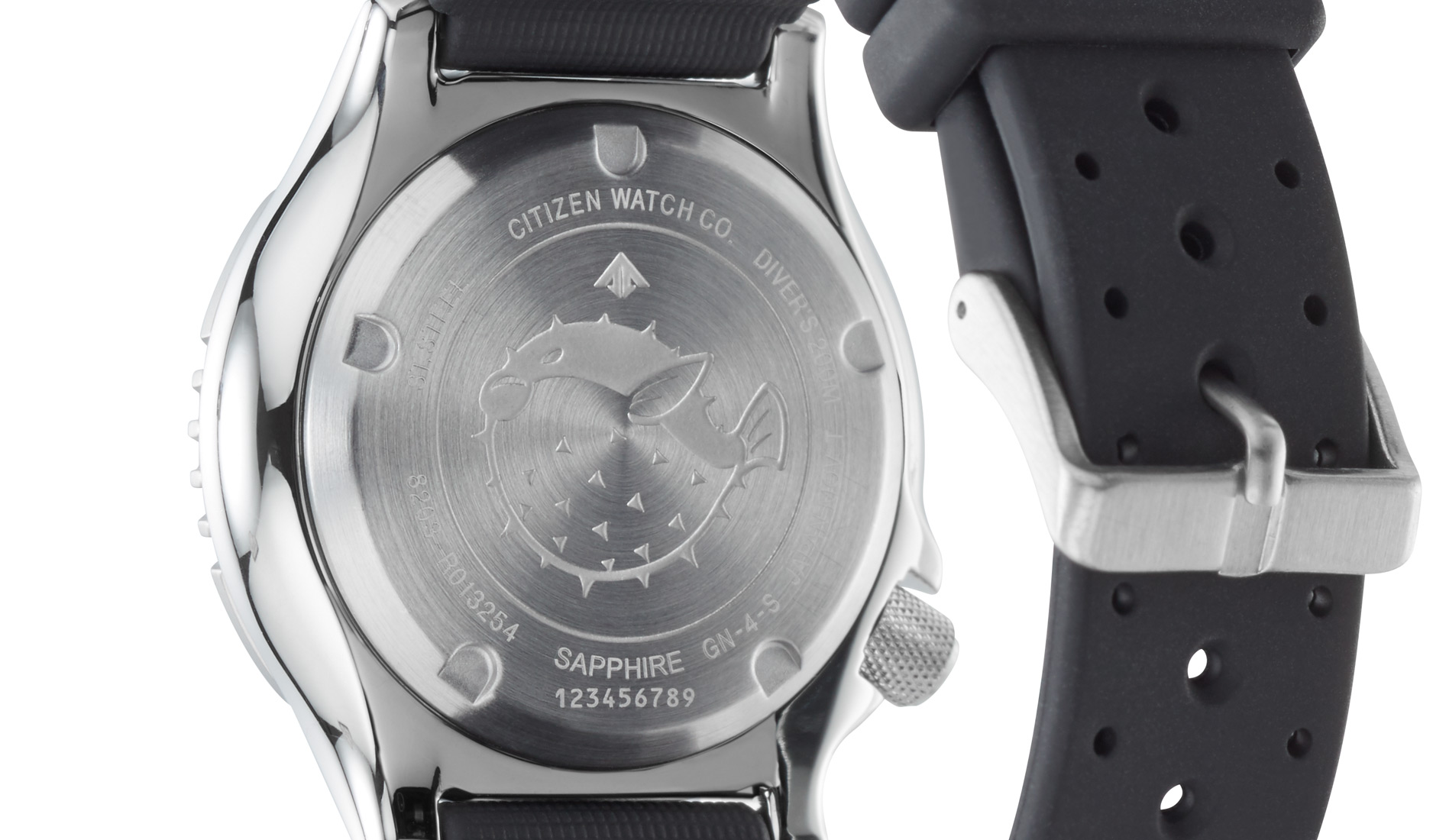 This year’s third-generation remake, the Asia Limited Promaster NY011, continues in the same vein, offering a unique looking, throwback inspired mechanical dive watch at an attractive entry-level price. At the same time, the new additions to the ‘Fugu’ family have also had a few extra touches added to sweeten the proposition. They include larger cases (44mm, instead of 42mm for the first- and second-gen ‘Fugus’); sapphire crystal dials instead of mineral crystal ones; and double the number of teeth (120, from 60 teeth) in the unidirectional bezel’s click system that allows one to set remaining dive times with increased accuracy. 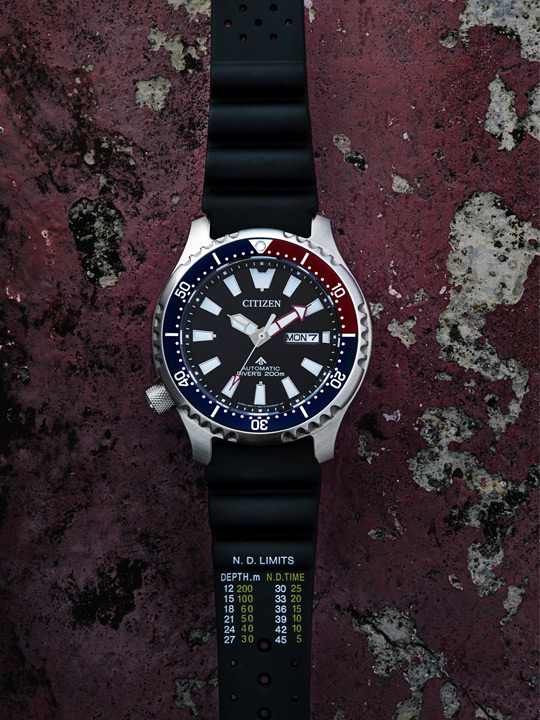 The second-generation Asia Limited Promaster NY009 roll-outs were distinguished by their metal bracelets. (Video below.) 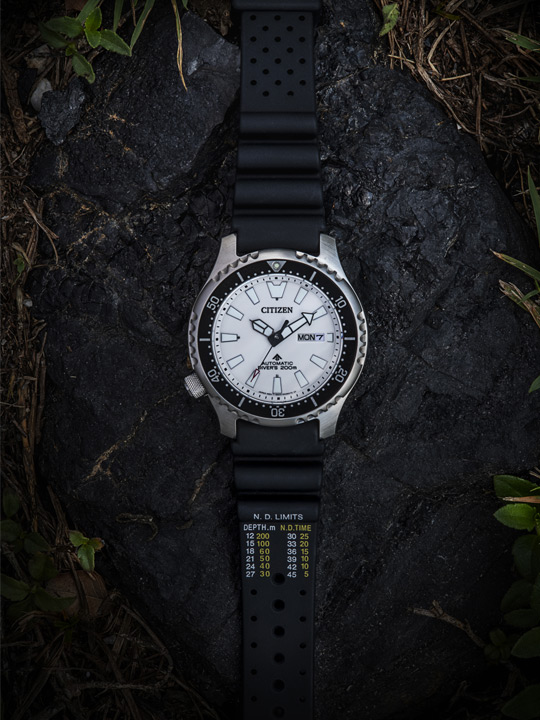 The Asia Limited Promaster NY011 comes in four versions. There is little to separate between three non-limited models – white dial with black bezel (NY0118-11A), black dial with black and blue bezel (NY0111-11E) and black dial with red and blue bezel (NY0110-13E) – which all emanate a rough-and-ready, utilitarian demeanour. However, the one that Citizen enthusiasts ought to check out the NY0119-19X, with black bezel and full-lume dial. If reception to the first-gen version featuring a similar dial, which was be quickly sold out was anything to go by, in third-gen full-lume ‘Fugu’, limited to 2,000 pieces is likely to be just as popular. 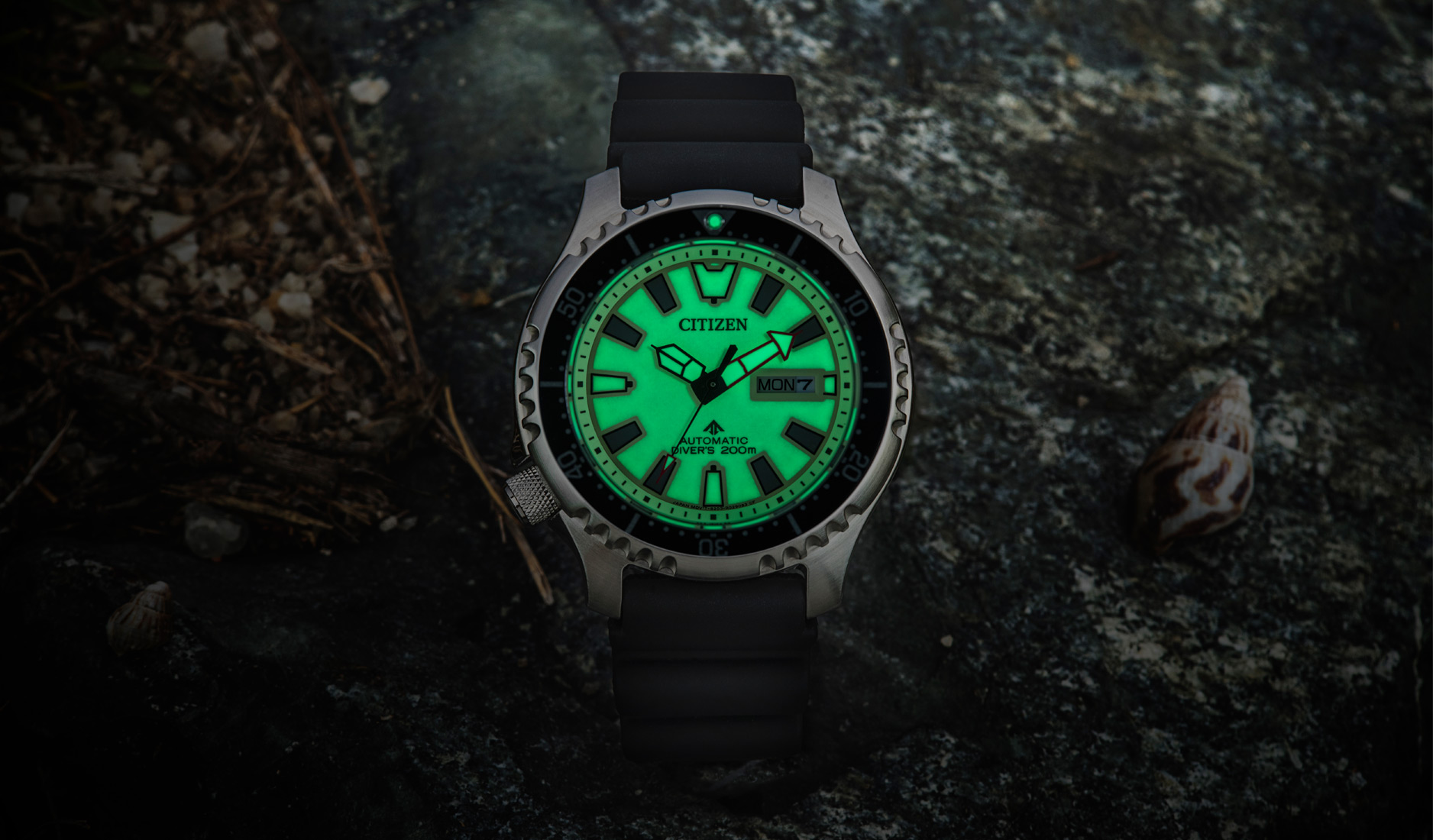