In the market for a G-Shock? This 20th Anniversary edition is every collector's must-have. 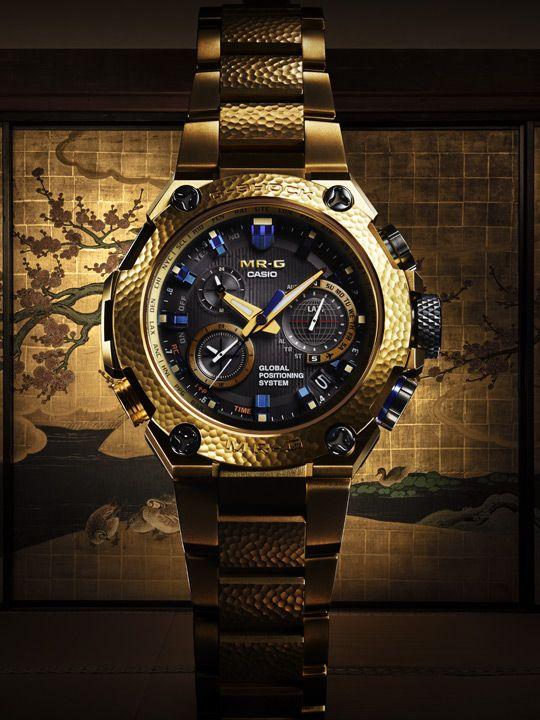 Looks like last year’s yellow gold trend isn’t going away any time soon. And why should it, when it adds such a bold pop of colour to the wrist? For the 20th anniversary of Casio’s MR-G series (the most premium line of the G-Shock family), the Japanese brand takes inspiration from its roots with tsuiki, a traditional Japanese metalwork technique used both in art and architecture.

The G-Shock is by no means an unfamiliar timepiece. First developed in 1981 by Casio’s engineer and head of watch design, Kikuo Ibe, the iconic watch has come to be one of Casio’s most recognisable models. (Read more about it in our interview with Ibe here.) With the addition of the tsuiki technique, the watch gets a fresh update in time for its 20th birthday.

By using a hammer to strike metal sheets and create indentations (above), tsuiki has long been used to create numerous items, from helmets and suits of armour to copperware and other metal containers. The technique allows the final product to be both thin and strong—perfect qualities for the G-Shock. Today, tsuiki continues to be used in train and aircraft components, amongst other things.

The master artisan behind this technique in the Casio G-Shock MR-G Hammer Tone is Bihou Asano (below), a Kyoto native from a family of TSUIKI metal hammering masters. Aside from this collaboration with Casio, the 74-year-old is also responsible for repairing and reproducing National Treasure metal art pieces in Japan, along with restoring items designated as Important Cultural Properties in Japan.

Limited to 300 pieces worldwide, the gold edition is distinguished by gold ion plating on the bezel, case, caseband and caseback, applied after deep-layer hardening. The watch’s indigo accents on the indexes and seconds hand come courtesy of a blue diamond-like carbon finish.

Inside, the watch bears an advanced timekeeping system with both GPS satellite signals and radio wave time-calibration signals. Like the earlier MRG-G1000 model, the gold edition also comes with the Dual Dial World Time that displays two time zones simultaneously, something jet-setters are sure to appreciate.