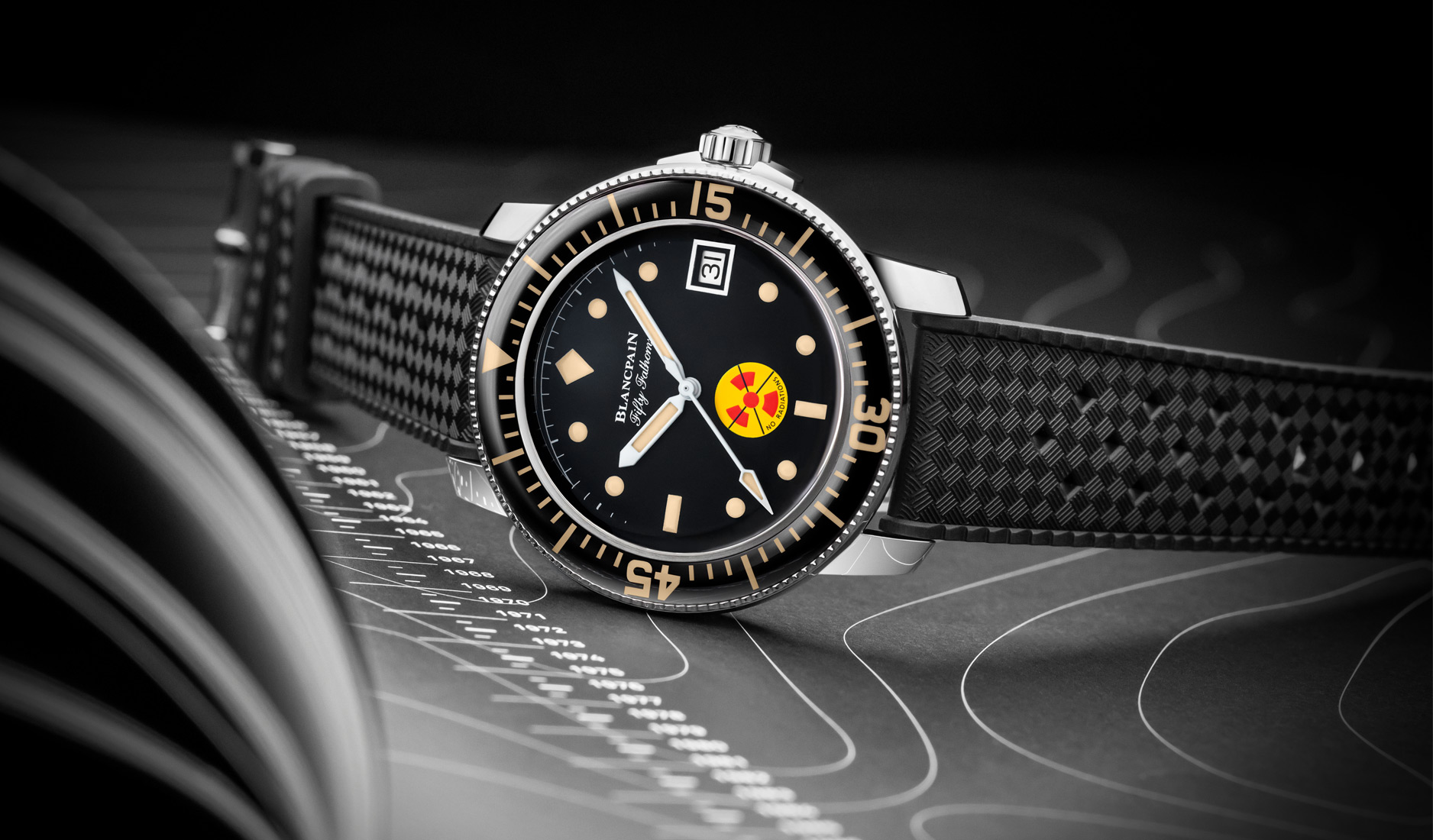 Blancpain appears to have hit a streak with reviving storied models from its deep archive of Fifty Fathom timepieces. Recent models like the dusty dialed Fifty Fathoms Bathyscape Day-Date 70s from 2018, and the Fifty Fathoms Barakuda from 2019 that reinterprets a 1960s model supplied to the German Bundesmarine, proved that there is a demand for throwback-style Fifty Fathoms watches that add a dimension of storytelling and caprice to a series of timepieces that is hailed as the first true modern dive watch collection.

For the new Fifty Fathoms No Rad, Blancpain revives another mid-1960s model that was issued to the German Navy’s Combat Swimmers unit. The ‘No Rad’ suffix refers to ‘no radiations’, represented by a crossed-out radiation logo on the dial, which served as a statement of assurance to the wearer that the watch contained no radium paint. 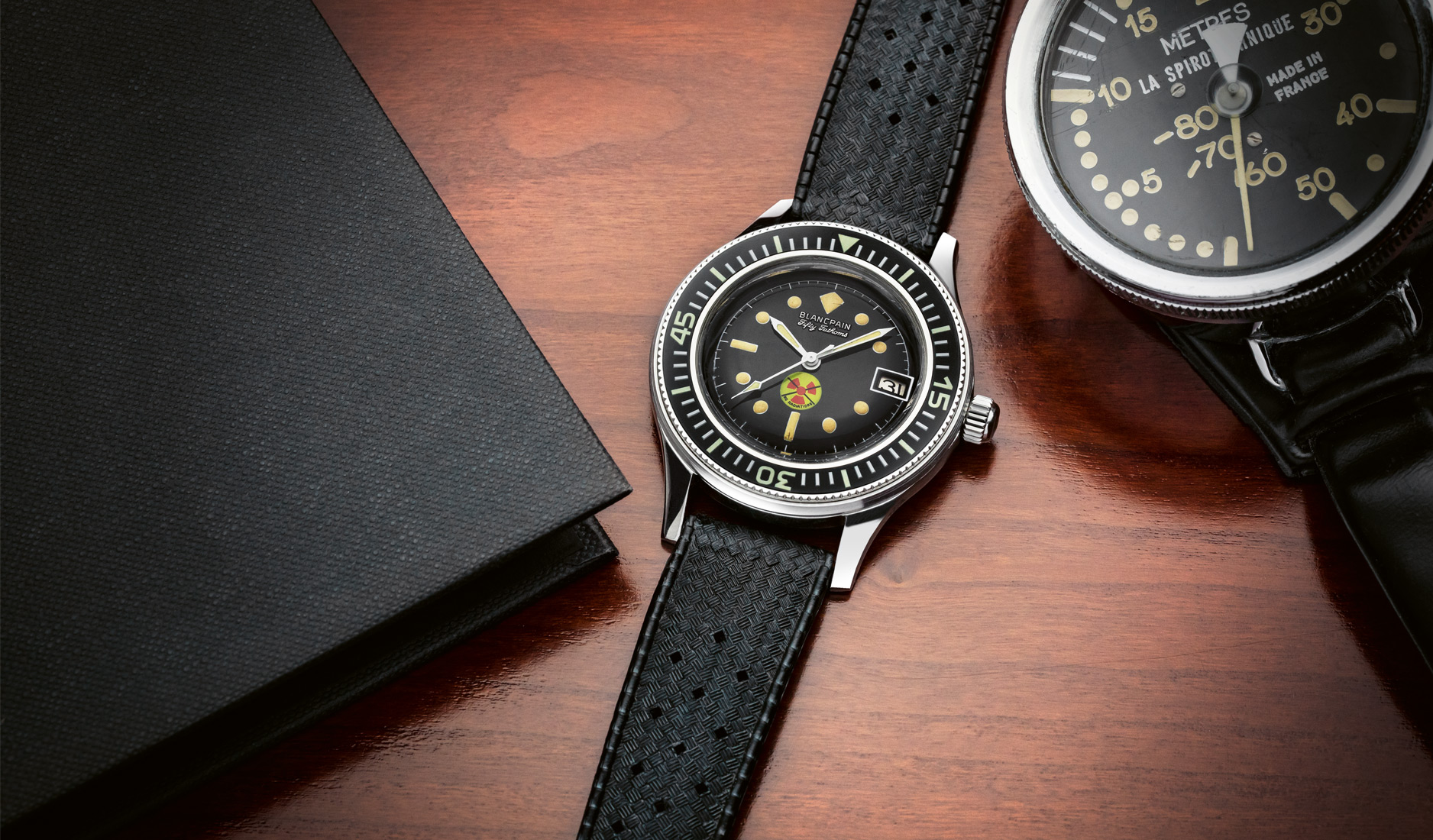 A material with self-luminating properties, radium was discovered in 1898 and subsequently used in watches in the early 20th century. Unfortunately, radium paint has two disadvantages. First, its luminescence is unstable and proven to weaken over time. More crucially, the material is a radiological hazard which, of course, raises red flags for both makers and owners of radium-coated watches. As such, its use was eventually phased out, replaced by other materials such as tritium, a radioactive form of hydrogen typically encased in gas-filled fluorescent tubes; as well as LumiNova (and its variant, Super-LumiNova), a non-toxic phosphor that works when charged from a light source, which was developed by the Japanese in the 1990s. Currently, both tritium and Super-LumiNova are the most common luminescent materials found in modern wristwatches. 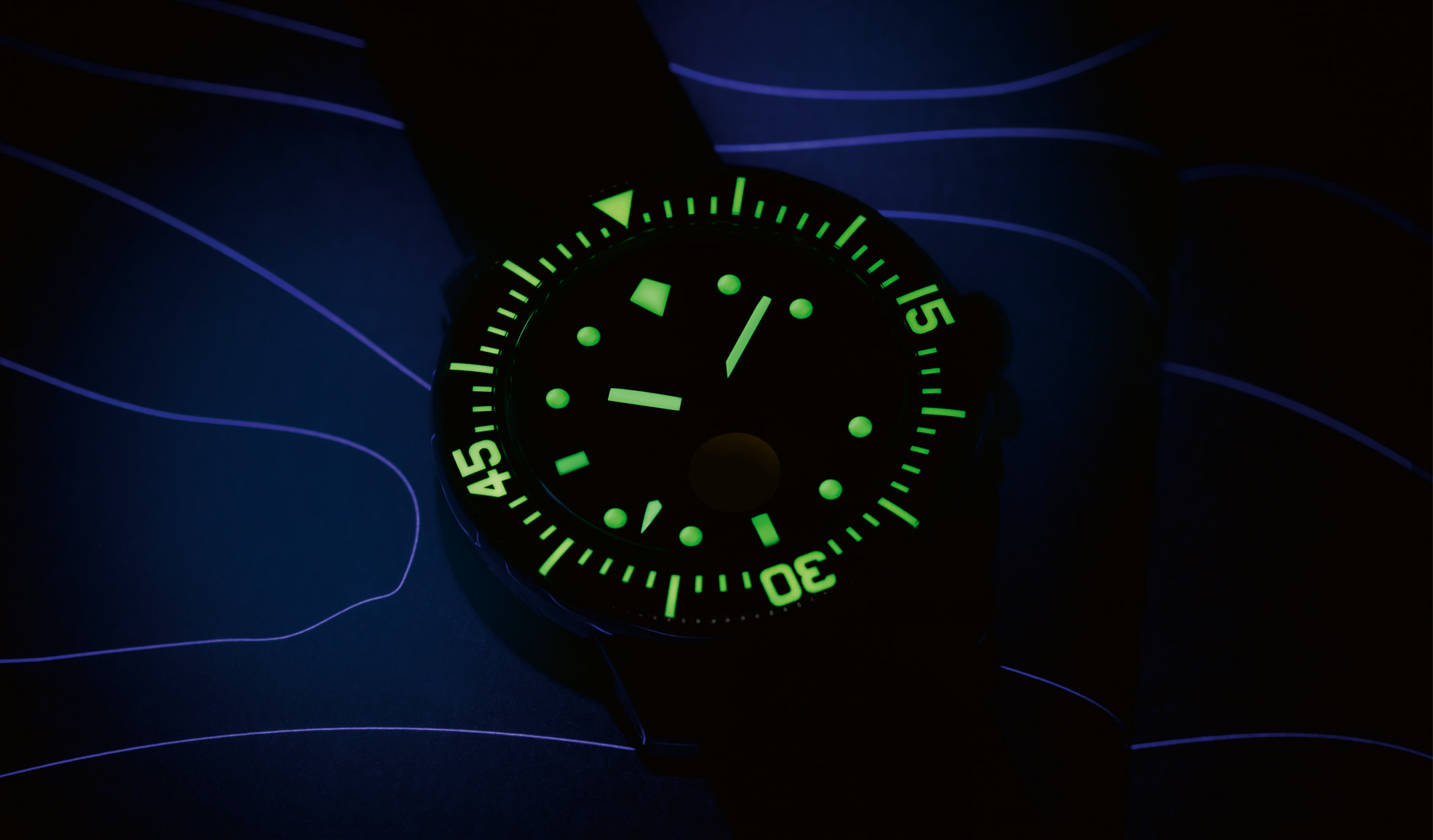 But back to the Fifty Fathoms No Rad. Based on the Fifty Fathoms RPG 1, also known as ‘BUND No Rad’ that was supplied to the German military in the 1960s, the modern iteration is a faithful reproduction of the original, save for some minor alterations. A watch that is charming in its simplicity and stark tool watch appeal, the Fifty Fathoms No Rad sports a jet-black dial with the famous red-and-yellow above the six o’clock index. The shape of the hands, hour markers, graduation markings on the knurled bezel, and date window at three o’clock echo that of its 1960s predecessor. 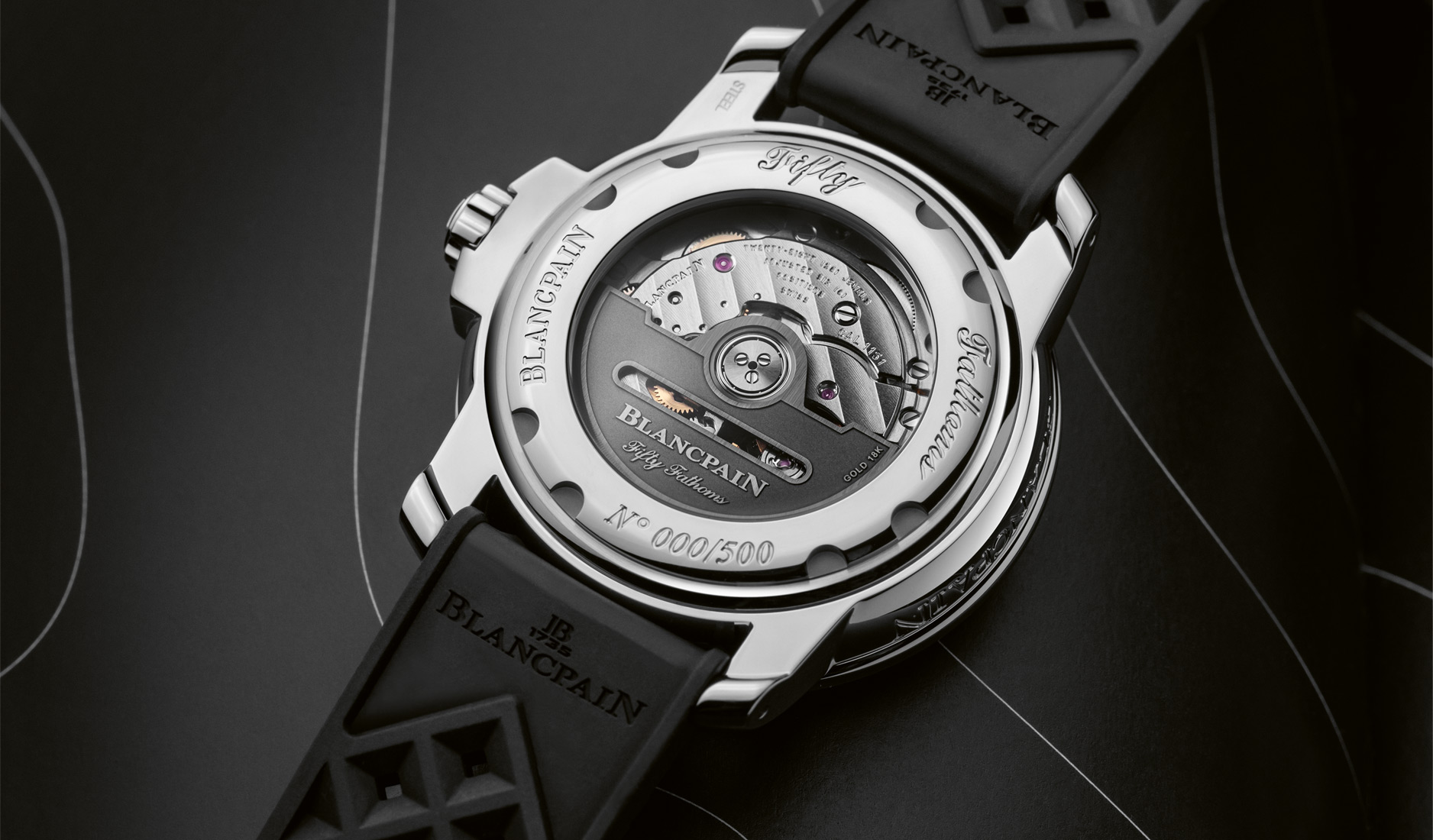 Aesthetically, the modern Fifty Fathoms No Rad appears more refined and sturdier in its polished 40.3mm steel case (a size reserved for limited-edition Fifty Fathom watches), which comes with redesigned lugs and the added fortification of a crown protector. And of course, the modern version’s technical performance has been upgraded, too. The watch is water-resistant to 300m and it is driven by the automatic Calibre 1511, a slim but powerful engine with silicon balance and two barrels that grant up to four days of power reserve. For a neat decorative touch, the movement is fitted with a rotor featuring a cartouche-shaped aperture as a nod to vintage Fifty Fathoms models. 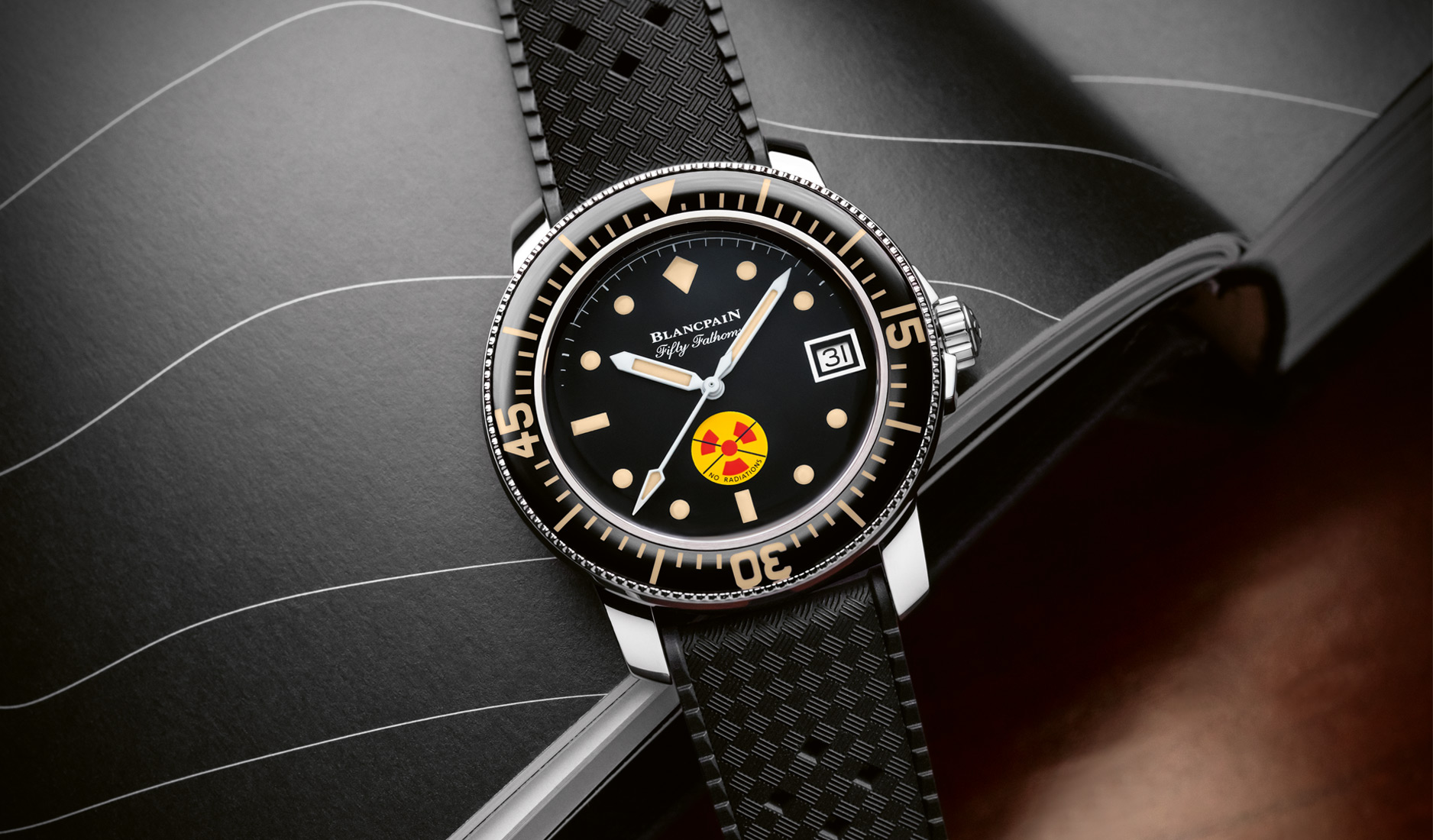 It is rumoured that the Fifty Fathoms No Rad is fast selling out its 500-piece limited edition run. It isn’t surprising, given the watch’s retro, easy-on-the-eye whimsy that belies its hardcore utilitarianism. We wouldn’t be much surprised, too, should Blancpain continue to issue more archival revivals in coming months.