Yellow gold? And chunky too? You know you’re not going to go quietly into the night with this ballsy Audemars Piguet chronograph. 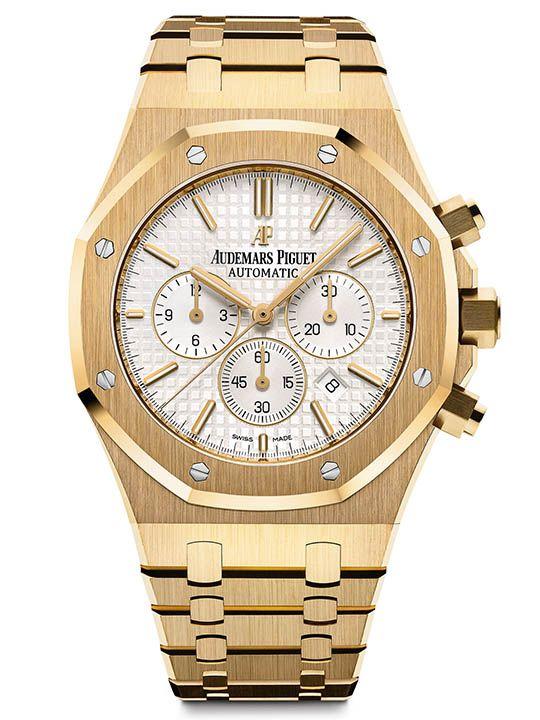 This is one of those don’t-hate-me-because-I-can tickers that moneyed bankers love to flaunt. Clad in 18K yellow gold – the most boss-type material there is, as with all Audemars Piguet Royal Oaks for 2016 – this chronograph looks and feels weighty, equally comfortable at a business lunch or a yacht shindig. Thankfully, it has a brushed matte finish so it’s not in-your-face loud and actually comes across quite classy, which is surprising for a watch that’s almost entirely in yellow gold.

The chronograph makes sense from a horological perspective, too. Given the Royal Oak’s pedigree as the pioneering luxury sports watch when it debuted in 1972, having a chronograph from the collection is a no-brainer, what with the complication’s interval timing function and natural heft endowing the package with a sense of athleticism and machismo.

Here, the three chronograph counters—12-hour and 30-minute totalisers, as well as small seconds at ‘6’— are set against a ‘Grande Tapisserie’ dial, a Royal Oak signature alongside the iconic octagonal bezel with exposed screws. The relatively clean dial means legibility of the counters is enhanced, which is great if you’re actually going to be using the chronograph function.

Measuring 41mm across, the watch sits comfortably on most men’s wrists, although ladies who like an oversized ticker could wear it just as well. At the heart of the timepiece is the Audemars Piguet Calibre 2385 with a minimum power reserve of 40 hours. The automatic movement is not new to the brand and has been driving Royal Oak chronographs since they were first introduced in 1998. Based on the Frederic Piguet Calibre 1185, the Calibre 2385 is proof that if it ain’t broke, there’s really no need to fix it.