The chameleonic UR-100V gets an ultra-light, carbon-cloaked makeover. 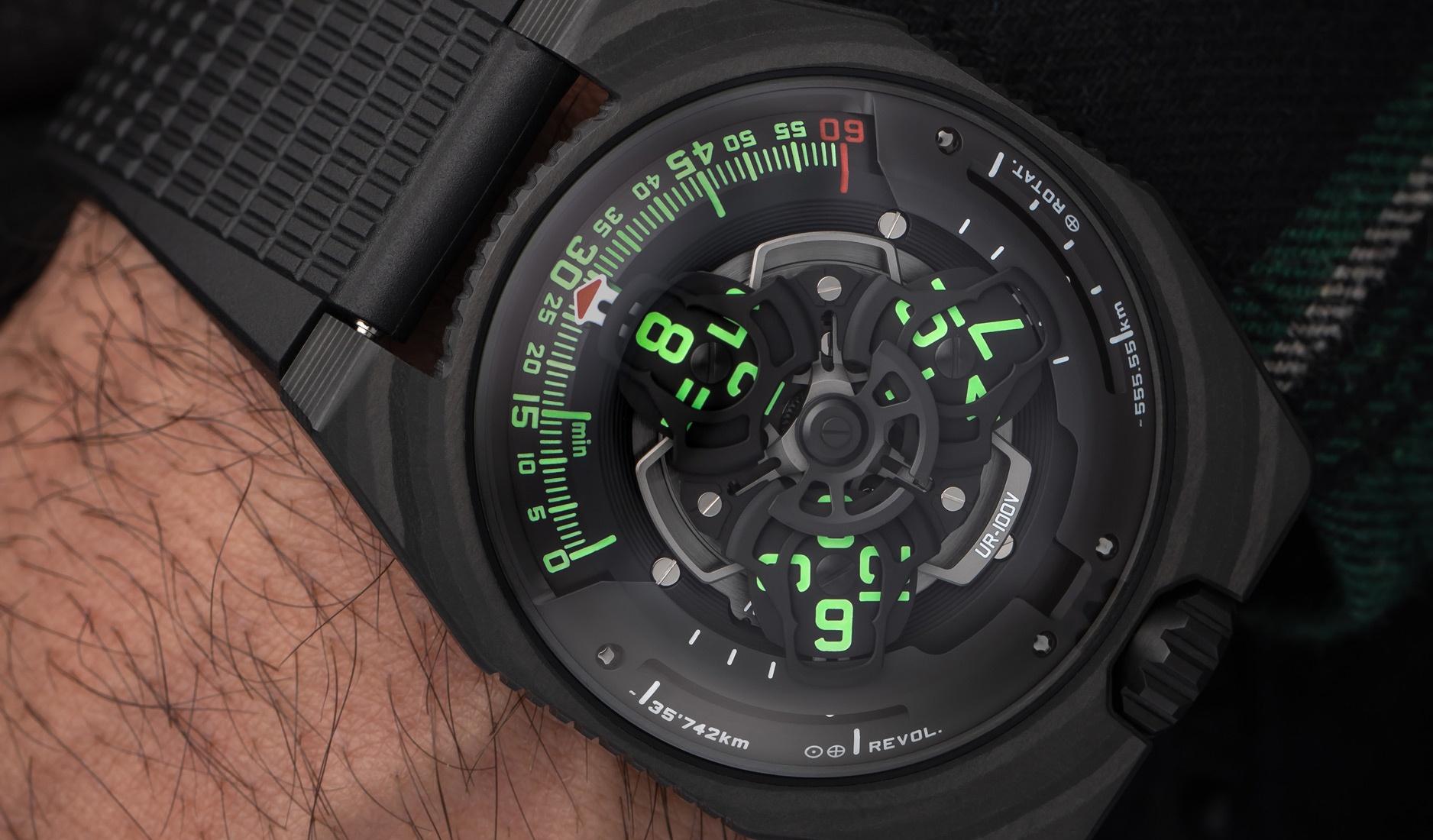 Who knew that a fully formed timepiece such as the Urwerk UR-100V could be expressed in so many different ways? As much as the watch is in a class of its own, distinguished by Urwerk’s characteristic rotary satellite display system and unique sci-fi-inspired aesthetic, the UR-100V has, depending on its iteration, at turns looked like a mini pop-art sculpture, a luxurious and modern objet d’art and now, a piece of futuristic and mysterious wrist statement that wouldn’t look out of place on Darth Vader.

Introduced in 2019, the original UR-100 model was billed as one of Urwerk’s most elegant takes on its satellite display complication, thanks to the watch's svelte dimensions. At the same time, it was also conceptually and technically far-out, described by its creators as a watch that could “measure both time and space”.

The UR-100 boasts a carousel system that displays the hours, along with three arrow hands at the bottom of the dial. The three arrow hands rotate and take turns to mark the minutes, the distance travelled around the equator in 20 minutes (Earth’s rotation), and the distance Earth travels around the Sun in 20 minutes (Earth’s revolution). A metal arc across the top half of the watch bears markings on the left and right to denote rotation and revolution distances, respectively.

Anchored by the truly cerebral display, the UR-100 soon evolved to take on various guises, featuring new materials and colours on its cases and dials. Besides the original models in steel and DLC-coated titanium, there have been the likes of the UR-100 Electrum (featuring a case made of an alloy comprising yellow gold and silver), as well as the UR-100V Iron (in a monochromatic combination of stainless steel and titanium). A departure from the shiny executions of earlier models, the new UR-100V C52 is clad in high resistance CTP Carbon.

The unique case is made by compressing 52 layers of carbon in epoxy polymer resin. The unusual construction results in a housing that is not only super-light, weighing just 11 grams including titanium caseback, but also tough and resilient. Complemented by a black coloured dial with striking green markers and a dash of red, the UR-100V C52 is a dark and sexy beast that ranks as one of Urwerk’s most aesthetically arresting and progressive creations. 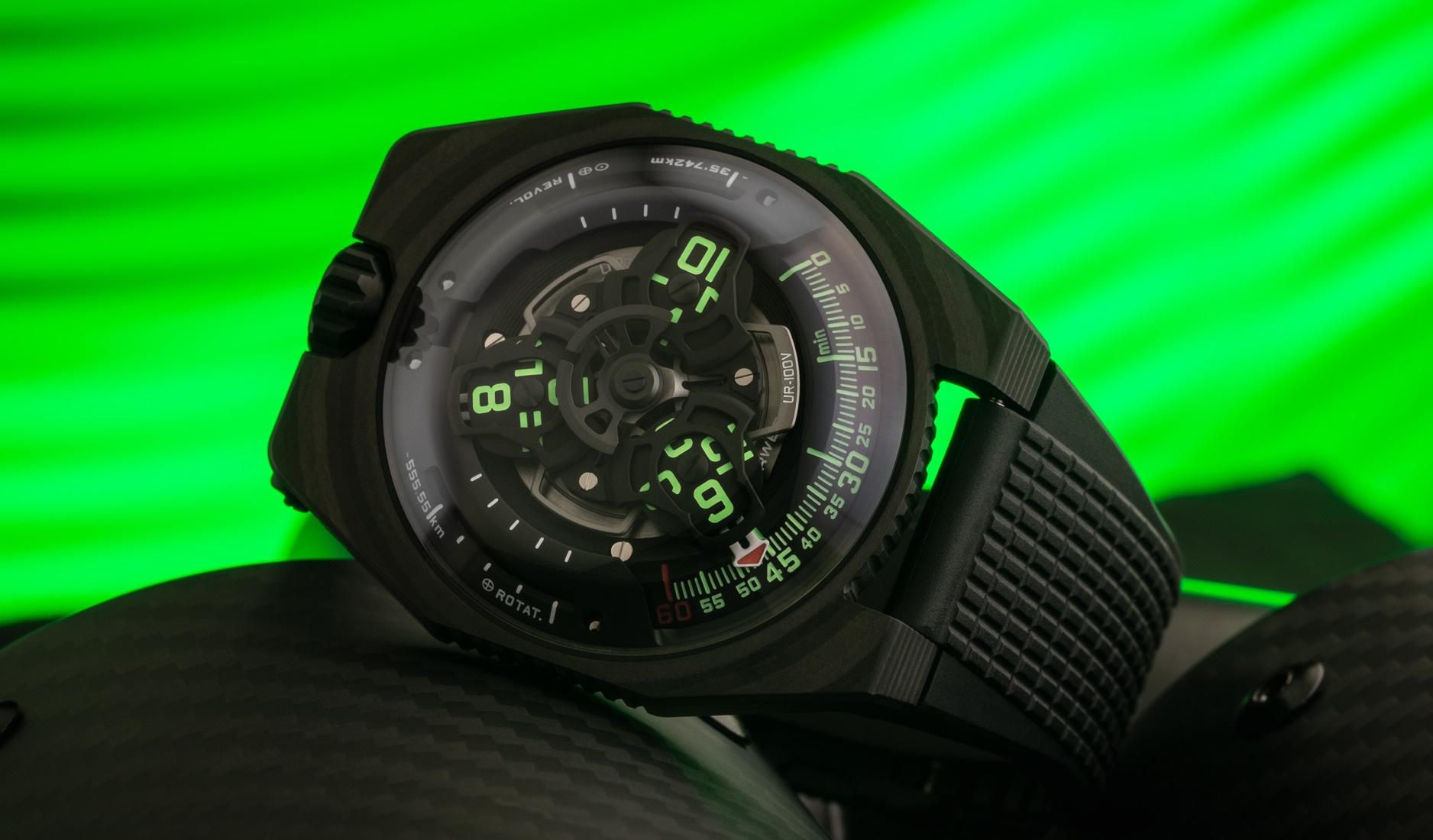 "The curves enhancing the bezel of the UR-100V C52, tracing their way from the crown to the sides of the watch passing through the lugs, are a classic reference. We find this same motif on the ancient Greek columns... (with) striations drawn and dug in the stone almost 2,500 years ago to channel rainwater and control its flow along these ageless pillars,” explains Urwerk co-founder and designer, Martin Frei. “This motif has become the symbol of classicism. I often play with this reference.”