Femininity to the fore.

As it is customary for any showcase, the best is saved for the last at Breguet’s presentation. And the highlight of the unveiling? The Classique Tourbillon Extra-Plat Squelette 5395 (below), a stupendous skeletonised creation that is the latest in line of the collection’s series of ultra-thin tourbillons with previous iterations that featured grand feu enamel and decorative hand-engraved dials.

Easily the most dramatic looking of the Classique Tourbillon Extra-Plat watches, this gent’s dress watch captivates with a dexterous mix of artistry and engineering. More than 50 per cent of the watch’s hand-wound movement has been removed, leaving behind an artful architecture that, while barely there, still manages to hold all the essential mechanisms in place. Not only that, the skeletonise gold movement does it while still promising robustness and superlative hand-decorations including hand-chamfered bridges and Clous de Paris patterns. 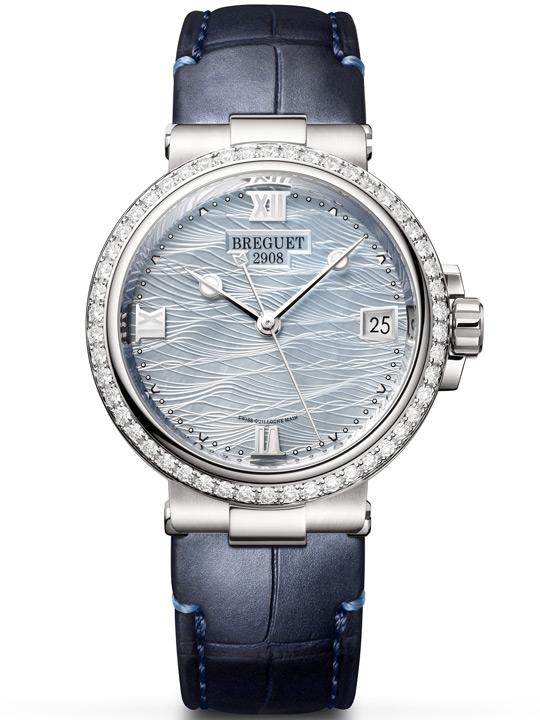 First up, there is a feminised version of the Marine collection that was revamped two years ago. While this year’s men’s models switched things up only ever so slightly with the inclusion of new titanium bracelets, it is the women’s offerings – simply  dubbed Ladies Marine - that shone with dials and winding rotors carved with a new wave-inspired motif that evokes the sea as it rushes to shore. We especially love the version with blue mother-of-pearl dial (above) with matching rotor, and another that features a unique lacquered blue dial with marbled pattern.

Possibly sensing that it has a winner here, Breguet replicates the distinctive dial decoration technique on the Reine de Naples ‘Playful Azure’ (above), easily one of our favourite women’s watches of 2019. Like the Ladies Marine that feature similar dial decoration, the Reine de Naples ‘Playful Azure’s’ mesmerising dial is rendered in shades of blue.

First, the artisan coats a dark navy layer of lacquer on the dial, and then applies more layers in a lighter shade. The mix of hues, coupled with the artisan’s careful manipulation, result in a unique marbled effect that is unique to each dial. Where the dials of the Ladies Marine are of a deeper tone, the dial of the Reine de Naples ‘Playful Azure’ is rendered with greater contrast and as a result, imbued with greater visual drama.

Breguet CEO, Thierry Esslinger, maintains that women’s watches make up a little less than 50 per cent of his brand’s turnover. But if this year’s ladies’ offerings are anything to go by, the balance may just be tipped in favour of women collectors.