Fans of Seiko’s Prospex diver watches, especially those who favour vintage-inspired designs, will have a happy conundrum with this latest trio from the Japanese brand. Each of the new models from the latest Prospex ‘Save the Ocean’ line - part of a longstanding campaign where a portion of the sales proceeds are channelled to ocean conservation efforts – hark to a distinct reference from Seiko’s dive watch repertoire that spans the 1960s to the 1970s.

As it is customary for Seiko’s ‘Save The Ocean’ watches, the new timepieces are distinguished by shades of blue. The colours are inspired by all manner of the marine world, from manta rays to majestic and, as the latest models show, awe-inspiring glaciers. As for their throwback disposition, the timepieces are modern reinterpretations of vintage Seiko dive models worn by researchers and explorers from way back; paying homage not just with aesthetic nods, but also in terms of the watches’ spirit and performance. The first model is the 1965 Diver’s Modern Re-interpretation: SPB297, which is cut from the same cloth as the 62MAS ‘Modern Re-Interpretations’ line-up, modelled after Seiko’s first ‘official’ dive watch, the 62MAS from 1965 (side note: the brand had actually produced an underwater-ready collection known as the ‘Silver Wave’ earlier in 1961, which was water-resistant to 50m and 30). Incidentally, the original 62MAS watches were field-tested at the Japanese Antarctic expedition between 1966 and 1969, where they were worn by researchers. The new offering boasts trademark 62MAS-inspired features such as tapered and angular lugs, slim bezel, three o’clock date window and boxy hour indices. Here, the 40.5mm steel case frames a textured dial in deep blue, one of three available dial colours that evoke the colours of glacial ice. 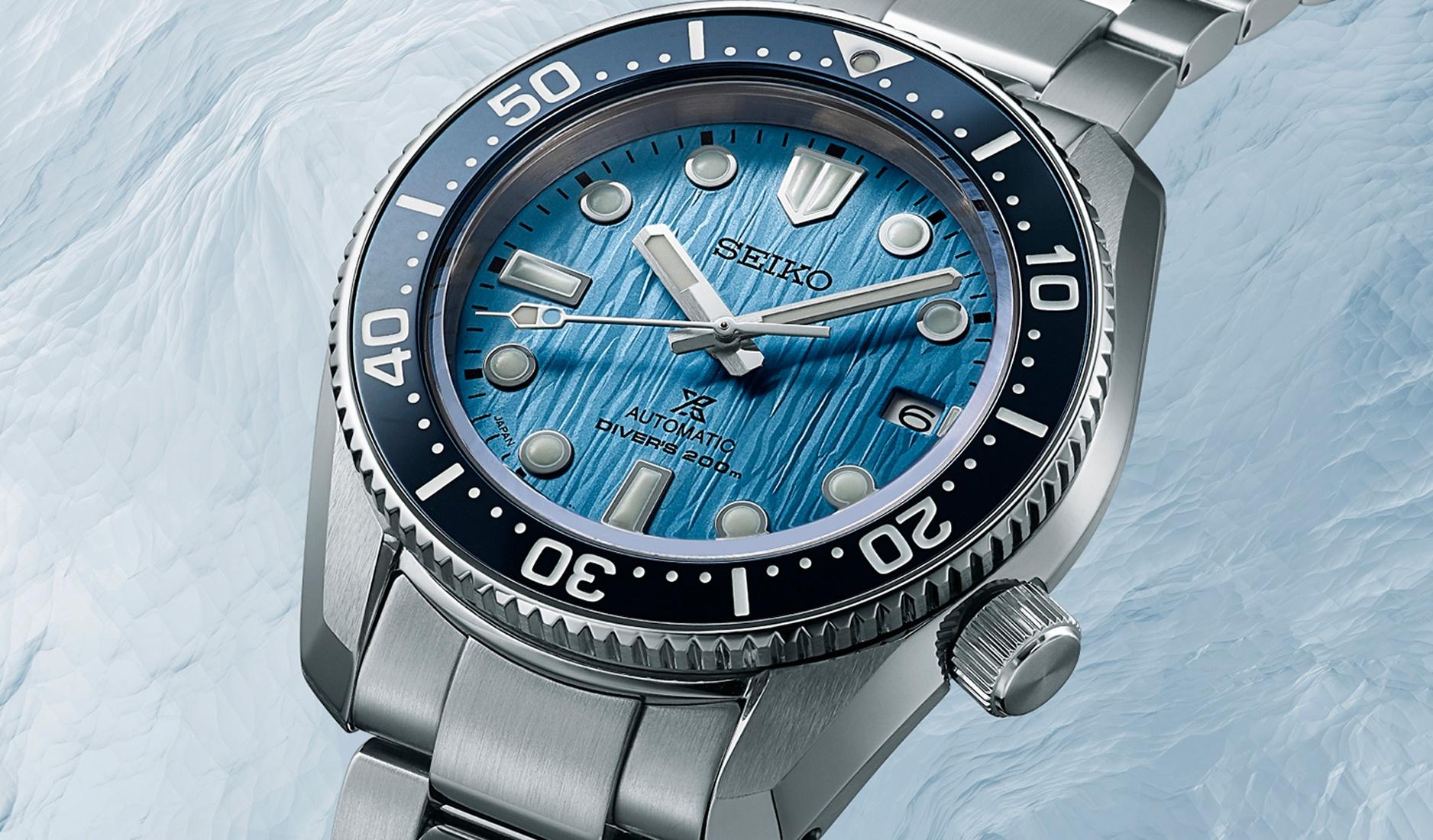 For those who lean towards something with a blue dial, but prefer a more imposing silhouette, the 1968 Diver’s Modern Re-interpretation: SPB299 is the one to look at. Anchored by the same textured dial but in a lighter shade of blue, this 42mm steel watch takes after the Reference 6159 from 1968. The original model was Seiko’s first dive watch with 300m water-resistance and the first to be fitted with a high-beat automatic movement. It also bore distinctive features such as a crown at four o’clock, flat caseback and bold hands and indices for enhanced legibility – all of which is tastefully recreated with modern proportions and finishing on the new version. 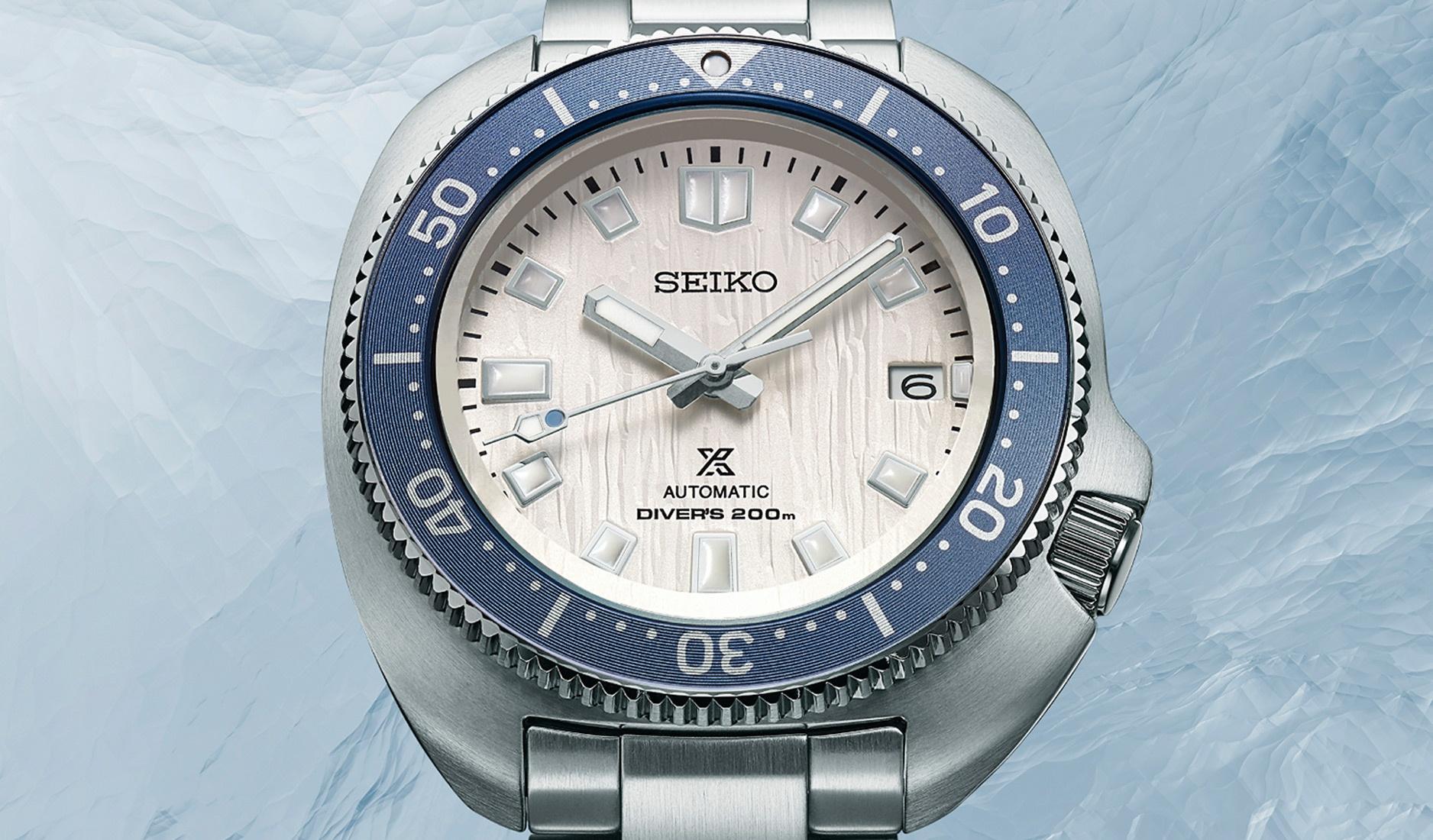 Last but not least, the 1970 Diver’s Modern Re-interpretation: SPB301 shares the spotlight as arguably the most striking of the trio. Recognised by its inimitable asymmetrical 42.7mm case that extends far beyond the bezel and crown at four o’clock, the watch takes after a 1970s model – affectionally known amongst collectors as the ‘Willard’ - worn by Japanese adventurer Naomi Uemura during his 12,500km solo dog sled run from Greenland to Alaska. Like the SPB299 and SPB297, the 1970 Diver’s Modern Re-interpretation: SPB301 features a textured dial that evokes the look of a glacier, but this time in pristine white and paired with a light blue bezel.

Available in stores in June 2022, all three Seiko Prospex Save the Ocean Special Editions are paired with matching bracelets and are powered by the automatic Calibre 6R35 with 70-hour power reserve.