That Time The Rolex Daytona Went A Bit Loco

When the Rolex Cosmograph Daytona turned 50 in 2013, the watch titan rocked up with one of its boldest iterations of the iconic sports model ever.

The Ref. 116506 was not business-as-usual for the Daytona family. While the collection is the horological equivalent of the Hermès Birkin bag (at its most popular during the 1980s, one had to wait for years to land a stainless steel model), the Ref. 116506 still made an impression as the most luxurious and unusual Daytona yet. When it launched, the anniversary model proved divisive. Clad in platinum – the first time for a Daytona, and the most precious metal to feature in the collection’s repertoire – the Ref. 116506 elicited extreme views.

Core to the debate was the unexpected combination of ice-blue dial framed by a chestnut brown Cerachrom bezel. The unlikely pair-up of colours had some collectors applauding Rolex for their stylistic audacity, while others felt that the flamboyance went a bit too far. Truth is, the Ref. 116506 demonstrates how well the Daytona has aged. If anything, the bold colour combination and regal garb express the collection’s still-youthful spirit.

It is also interesting to note that it is on this model that the Cerachrom bezel made its debut in the Daytona line, a feature that appears in the highly coveted steel versions from 2016 and this year’s yellow gold model. 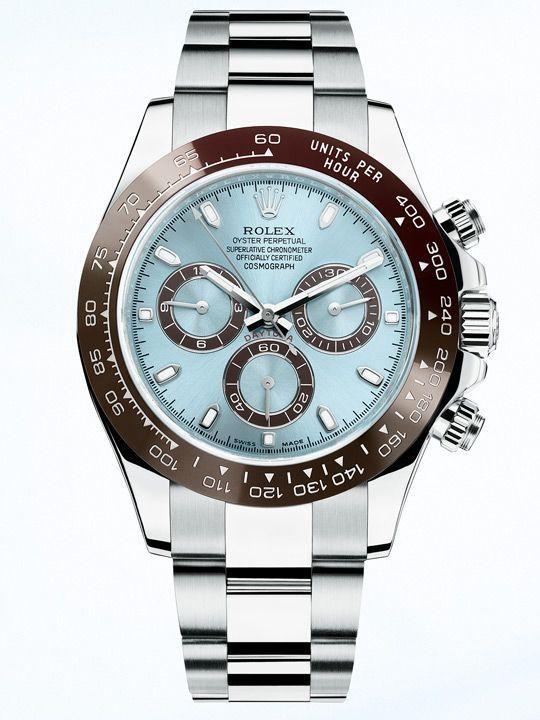 With the Daytona looking younger as years pass, the Ref. 116506, along with the latter day models, continue to offer performance standards that meet contemporary demands. The high-gloss, scratch- and corrosion-resistant Cerachrom bezel attests to that, as does the in-house Calibre 4130 COSC-certified automatic chronograph movement, with column wheel and vertical clutch system for greater precision, which has powered all Daytonas since 2000.