Written by Joshua Yap on 05 January 2020. in Rolex Articles.

Reasons why it is the ultimate prestige watch. 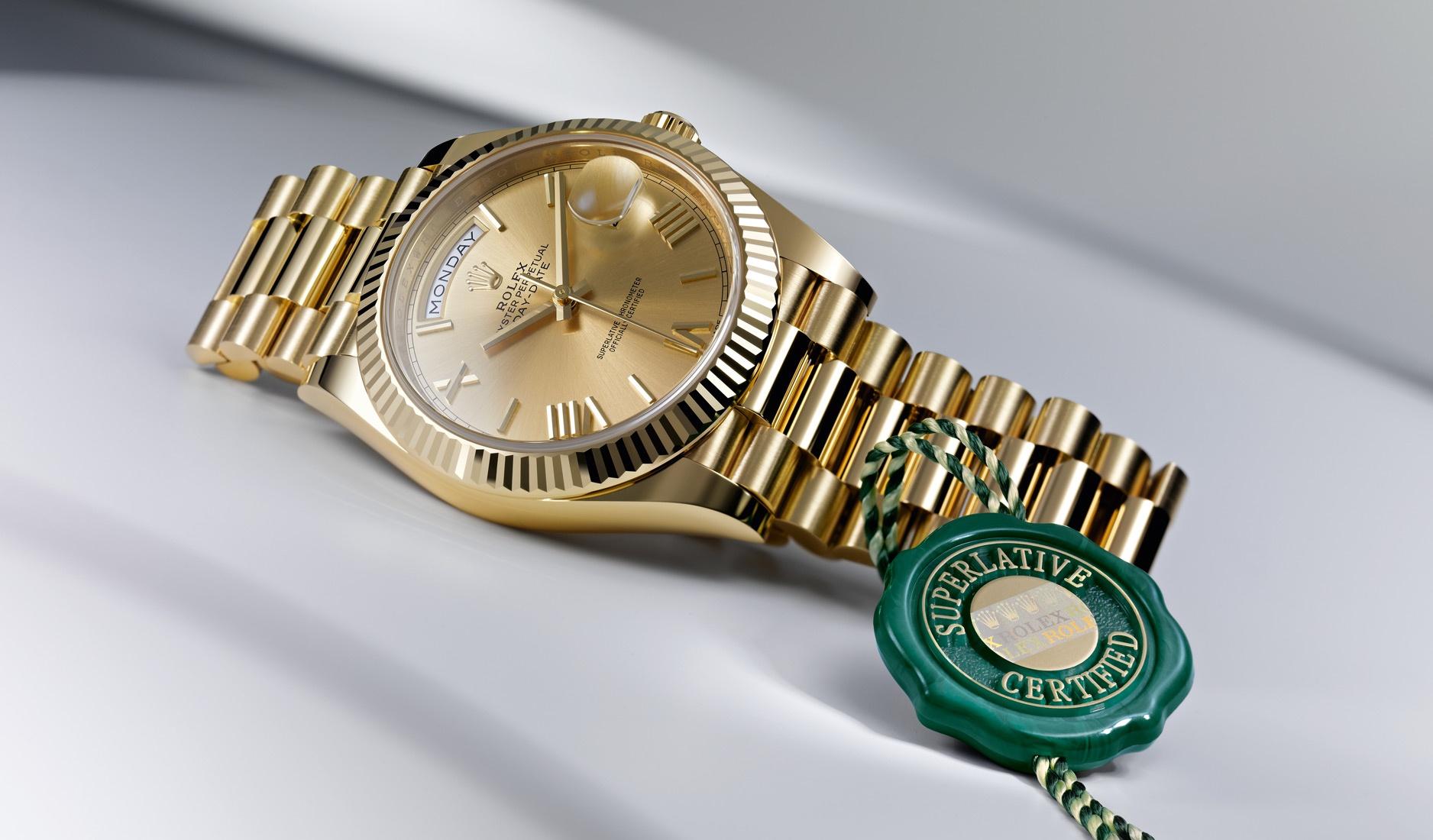 PRESIDENTIAL ORIGIN
The Day-Date has been destined for greatness from the get-go. Launched in 1956, it was built on the Rolex Oyster Perpetual Datejust’s winning formula and became the first waterproof, self-winding chronometer wristwatch to display the date, as well as the day of the week spelt out in full. 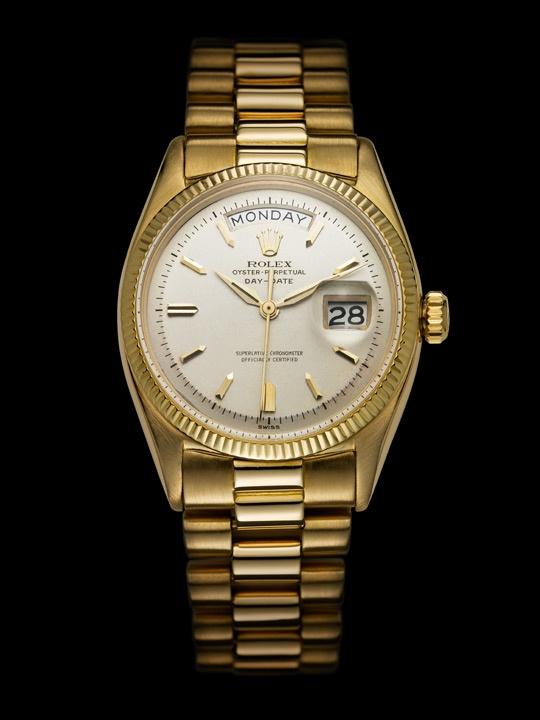 In 1963, the Day-Date became famously associated with its nickname after Lyndon B. Johnson became the first US president to own the watch. In 1966, Rolex proclaimed the Day-Date as the ‘presidents’ watch’ in advertisements, which earned the watch its famous nickname. In Rolex’s words, the Day-Date is for “men who guide the destinies of the world”. 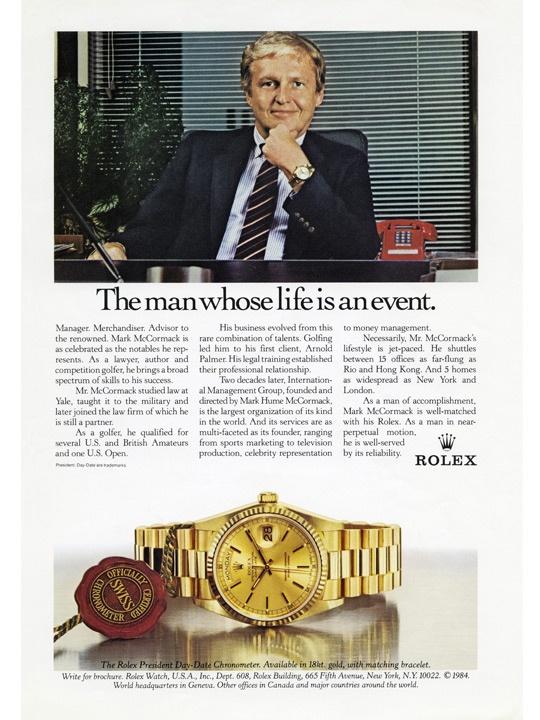 UNCHANGING SWAG
Like most horological icons, the Day-Date has remained largely unchanged at its core. It is still only available in 18 ct gold (yellow, white or Everose) or 950 platinum, with a fluted or gem-set bezel and the President bracelet that bolsters its instantly recognisable look – and conceivably gave it its moniker. 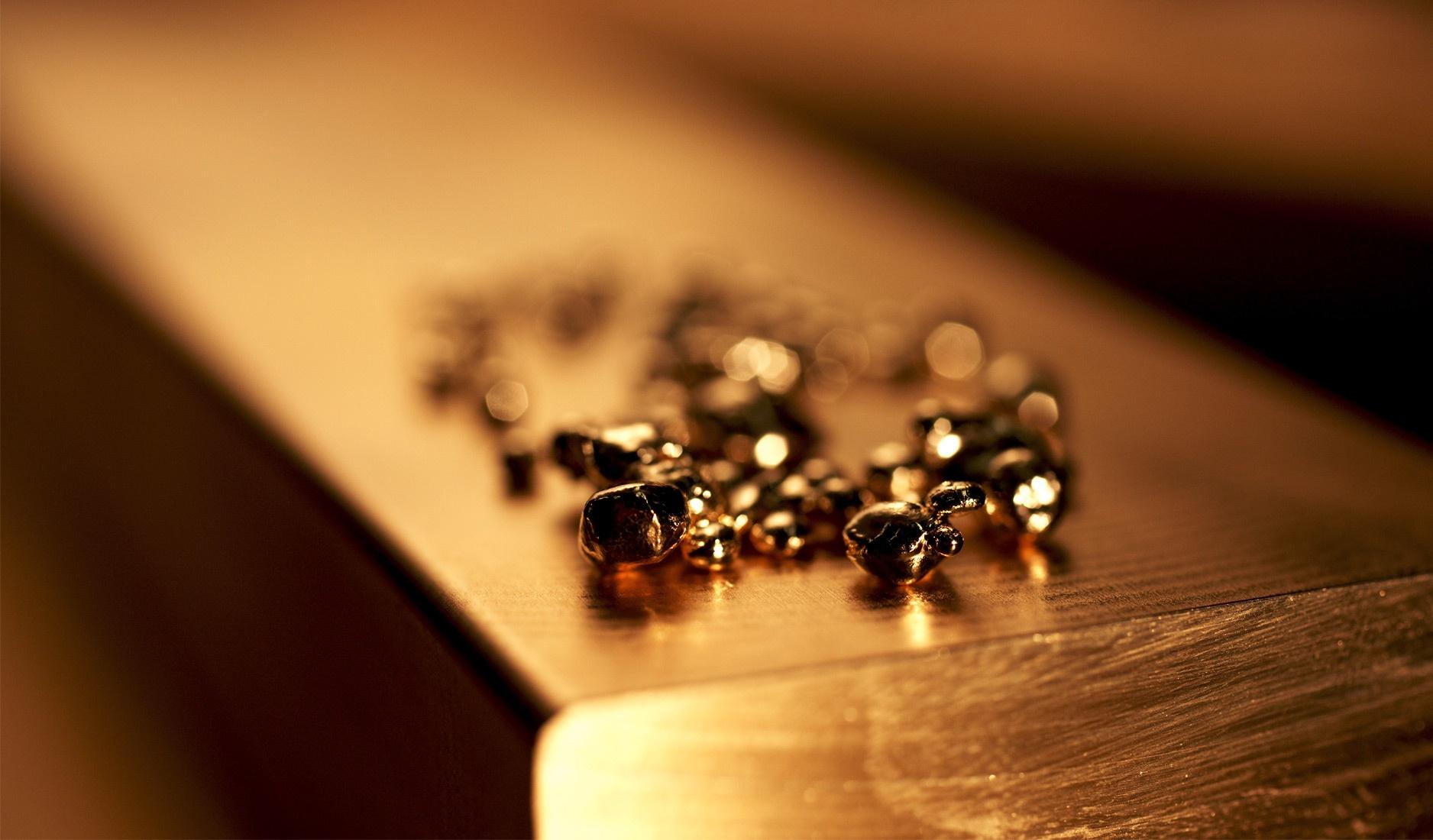 All Rolex Day-Dates are crafted only in precious metals

Another of the Day-Date’s most distinctive features, the integrated ‘concealed clasp’ was actually introduced way back in 1969. Known as Crownclasp, it is the perfect complement to the Day-Date’s semi-circular three-piece link bracelet, which features satin-brush finish on the flanks and polished finish in the middle. When closed, the Crownclasp results in a seamless flow of artfully assembled metal from one end of the bracelet to the other, draping the wrist with silky stateliness. Although it has been subsequently issued with larger case sizes, the Day-Date comes full circle this year with a sensational return to its original 36 mm form, alongside a host of updates.

FORTIFIED FUNCTIONALITY
Through the decades, the Day-Date ruled the roost at Rolex with various upgrades both above and under the hood. Function-wise the Day-Date has been constantly improved upon since its inception. The Calibre 1055, which powered the original model, was fitted with Microstella nuts to earn the watch its chronometer status before it was replaced with the Calibre 1555 in an upgraded model from 1958. Thereafter, the Day-Date was given a series of technical improvements, such as the thoughtful double quickset function in 1988, which allows one to make adjustments to the day and date displays independently from each other and the time. This year, it is ultimately fitted with the best Rolex has to offer yet: Calibre 3255. 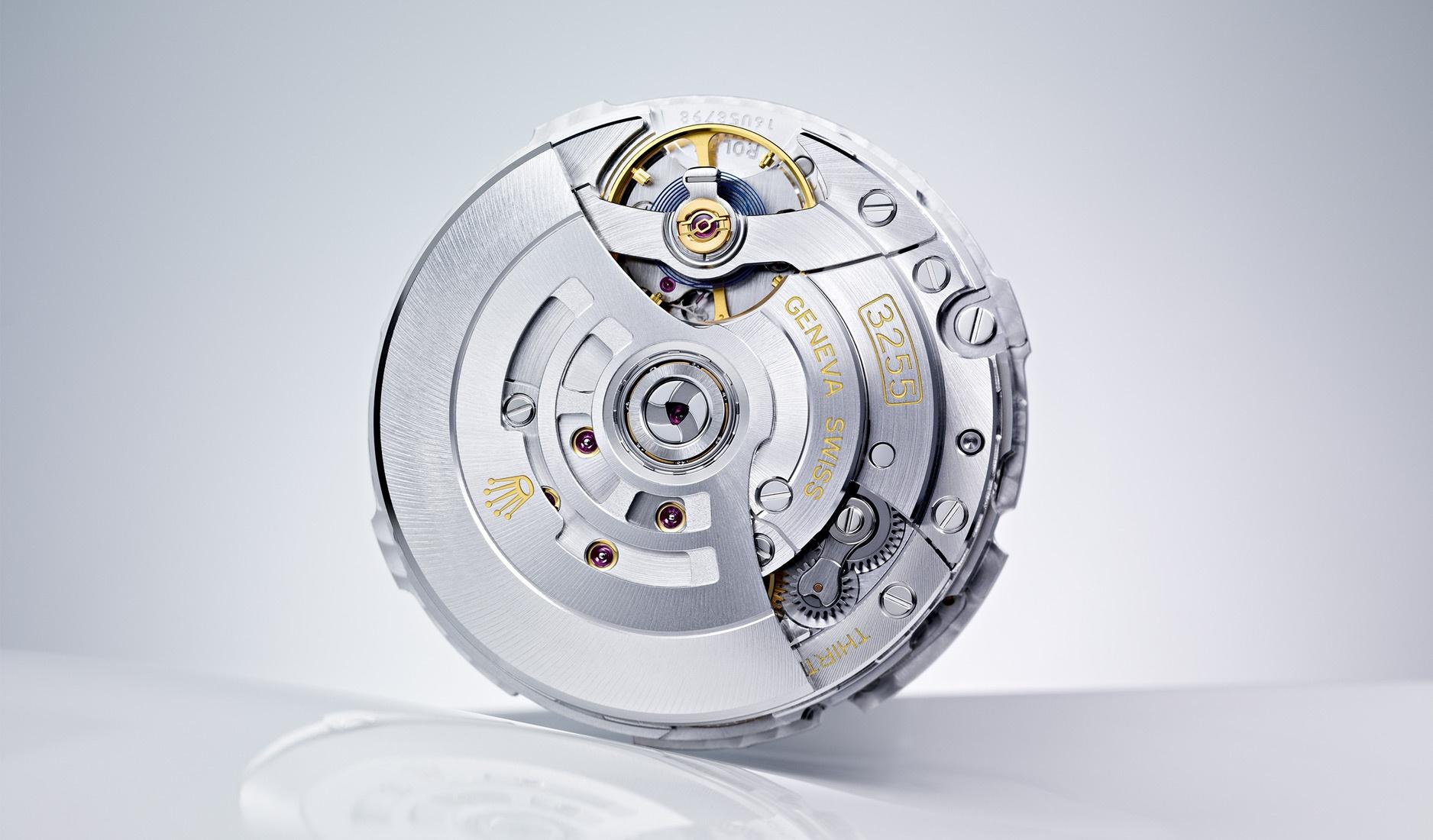 Those holding out for Rolex to endow the Day-Date 36 with its latest technical advancements and design enhancements will be heartened to know that it didn’t pull any punches. The new-generation Calibre 3255 drives the collection, four years after making its debut in the Day-Date 40. Packed with 14 patents that enhance the watches’ performance, the movement’s slew of innovations includes the paramagnetic blue Parachrom hairspring, Paraflex shock absorbers, and the highly efficient Chronergy escapement that bumps up its power reserve to 70 hours, a 50 per cent increase from its predecessors. The President bracelet has also been improved with ceramic inserts, another update that first appeared in the Day-Date 40. This may seem like attention to a small detail, the ultra-hard inserts ensure a taut and comfortable wear that lasts.

RETURN TO FORM
The 2019 crop of Day-Date 36 looks set to tip things further to its favour. The return to its original case dimension aside, the new Day-Date 36 line-up is a stellar cast. The collection’s inherent sophistication is further elevated through a mix of bold colour combinations, expressive gem-setting, and eye-catching dial offerings. 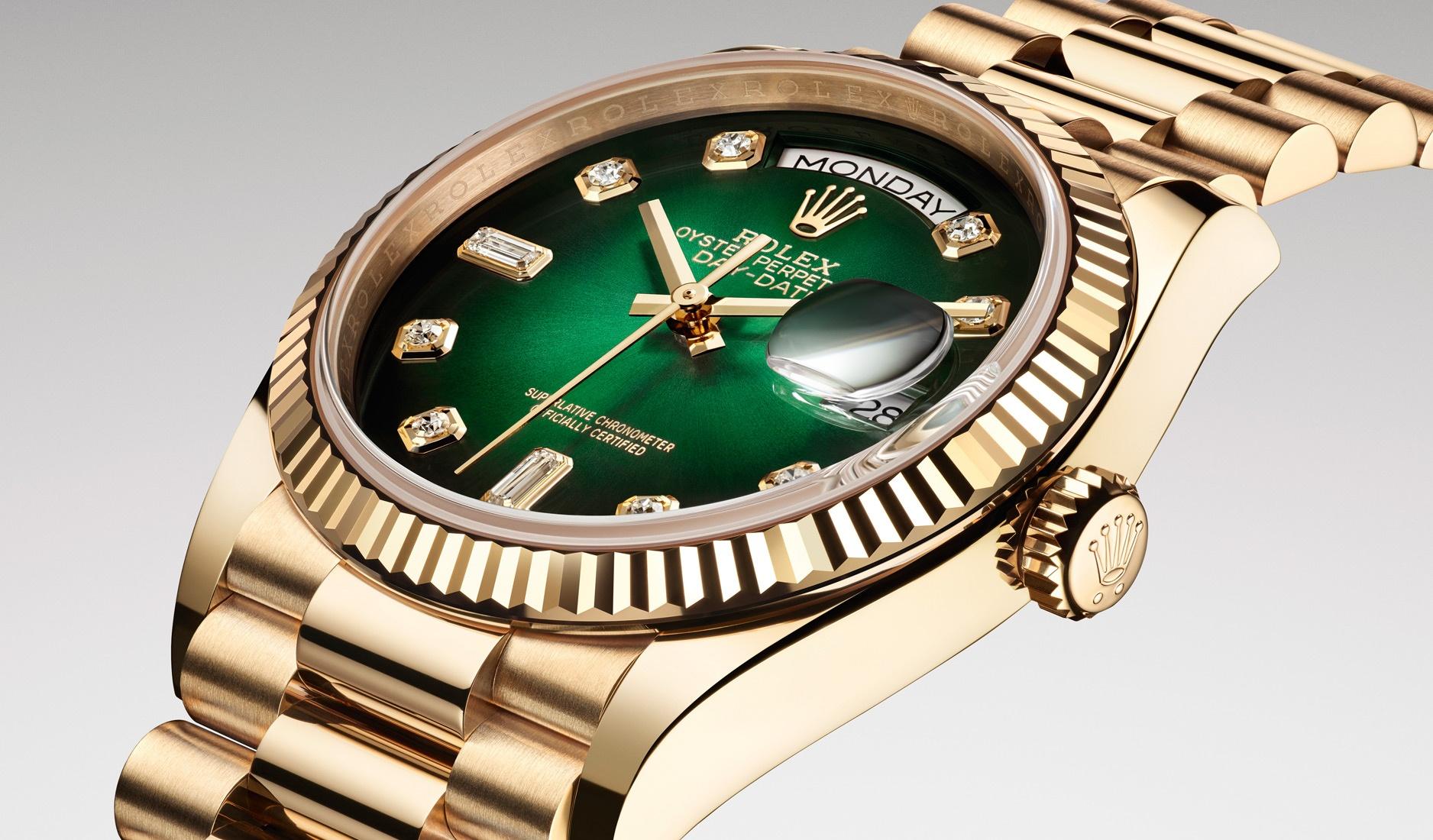 Those who wish to make a sartorial statement will do well with the ombré dialled versions, green with 18 ct yellow gold and brown with 18 ct Everose gold, both with diamond markers. Also noteworthy are the variants with pink opal or turquoise miens that recall the psychedelic Stella dials of 1970s Day-Dates. If bling is the order of the day, only the gem-set iterations will do; fully encrusted in diamonds, from bracelet to bezel to dial, they are further enlivened by 10 baguette-cut sapphires in rainbow colours as indexes. 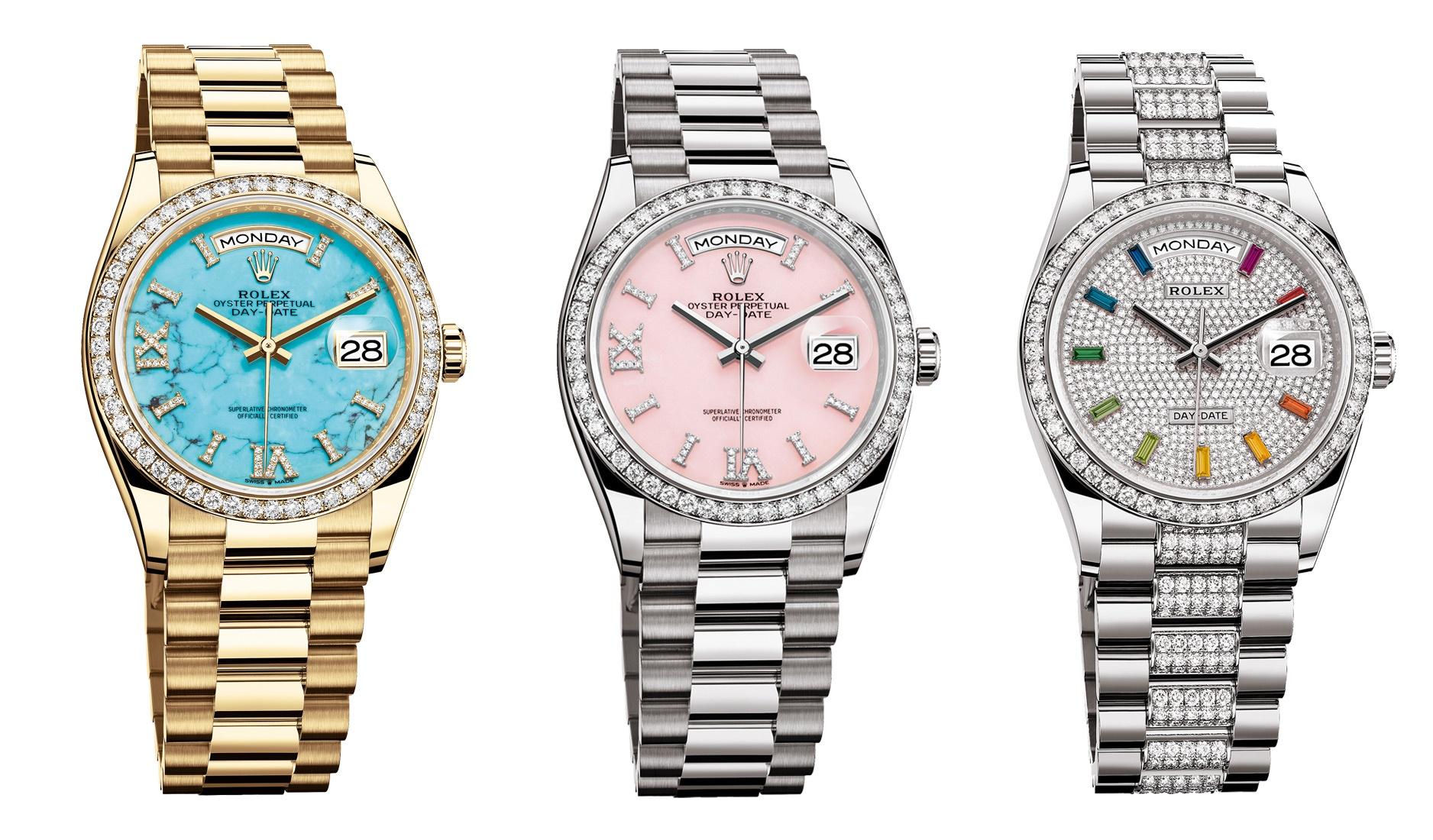 Truth be told, the Day-Date is not an easy watch to pull off, considering its association with prominent personalities. Whichever style you choose, one thing’s for certain – you will be making the definitive power move, horologically speaking, just by wearing one, a fact that rings true 63 years on.