All rise for the crowning of the new Air-King.

IT'S BACK
For a long time, the Air-King was one of the most accessible entry-level Rolex timepieces in the market and even US Senator John McCain was known for his love of the watch. But when it disappeared from the catalogues in the last couple of years, fans speculated the model would be discontinued. Much to their delight, the timepiece is back and carries with it the name “Air-King” in the same font designed especially for it in the 1950s. We hear a collective sigh of relief all round.

IT WAS BUILT FOR THE SKIES
Celebrated English aviator Charles Douglas Barnard once said of the Oyster, “The peculiar qualities of this Rolex watch render it eminently suitable for flying purposes and I propose to use it on all my long-distance flights in the future.” The latest Air-King is a nod to the Oyster’s place in aviation history and bears a jet black dial with prominent minute indices for navigational time readings. 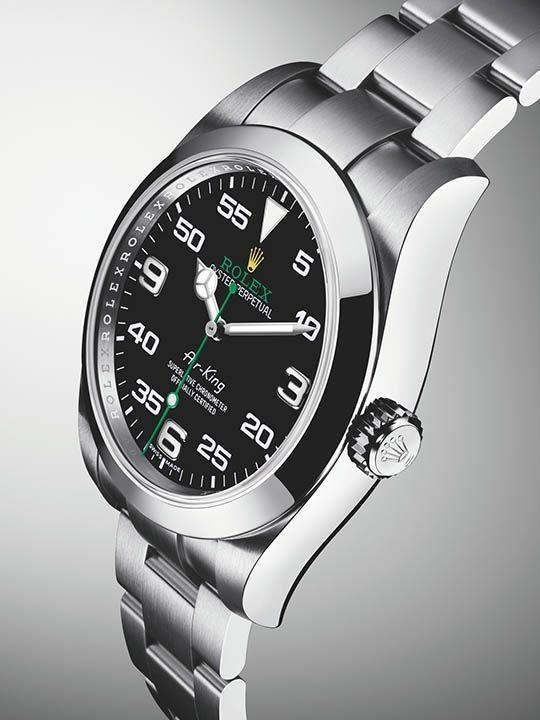 IT'S SEALED LIKE FORT KNOX
That’s right, you can put those tools away now. Only Rolex watchmakers have a special instrument that can open the airtight fluted caseback and grant access to the movement within. The Air-King is also fitted with the Twinlock double waterproofness system where the crown screws down firmly against the case like a really good insurance plan.

IT HAS A SHIELD
Well, not the superhero kind, but almost. The waterproof case is equipped with an anti-magnetic shield to protect against magnetic fields, which could affect the accuracy of a watch. This is especially useful for pilots whose jobs mean they are always around magnetic deflectors found in radar screens. The watch also comes with Rolex's proprietary Parachrom hairspring, which is also anti-magnetic and resistant to varying temperature.

IT'S MORE THAN ACCURATE
You know that over-achieving kid in school who was never content with 99 marks? That’s the Rolex Superlative Chronometer in the Air-King. Not only has the chronometer undergone rigorous tests, which exceed usual watchmaking criteria, it’s accurate to -2/+2 seconds per day after the watch has been cased. That’s more than twice what’s required of an official chronometer.

More in this category: Rolex Submariner For Newbies: Five Things To Know How To Buy Your First Rolex
back to top