The latest models are emblematic of Patek Philippe’s journey in chronograph-making.

Whether on its own or paired with other complications, the Patek Philippe chronograph is a work of sublime beauty and performance. Appreciated with the same reverence and desired with equal fervour as the brand’s renowned world time and minute repeater complications, the Patek Philippe chronograph, though comparatively more modest in terms of technical functionality and complexity, is just as much of a grail watch as the rest of the brand’s top-drawer offerings. 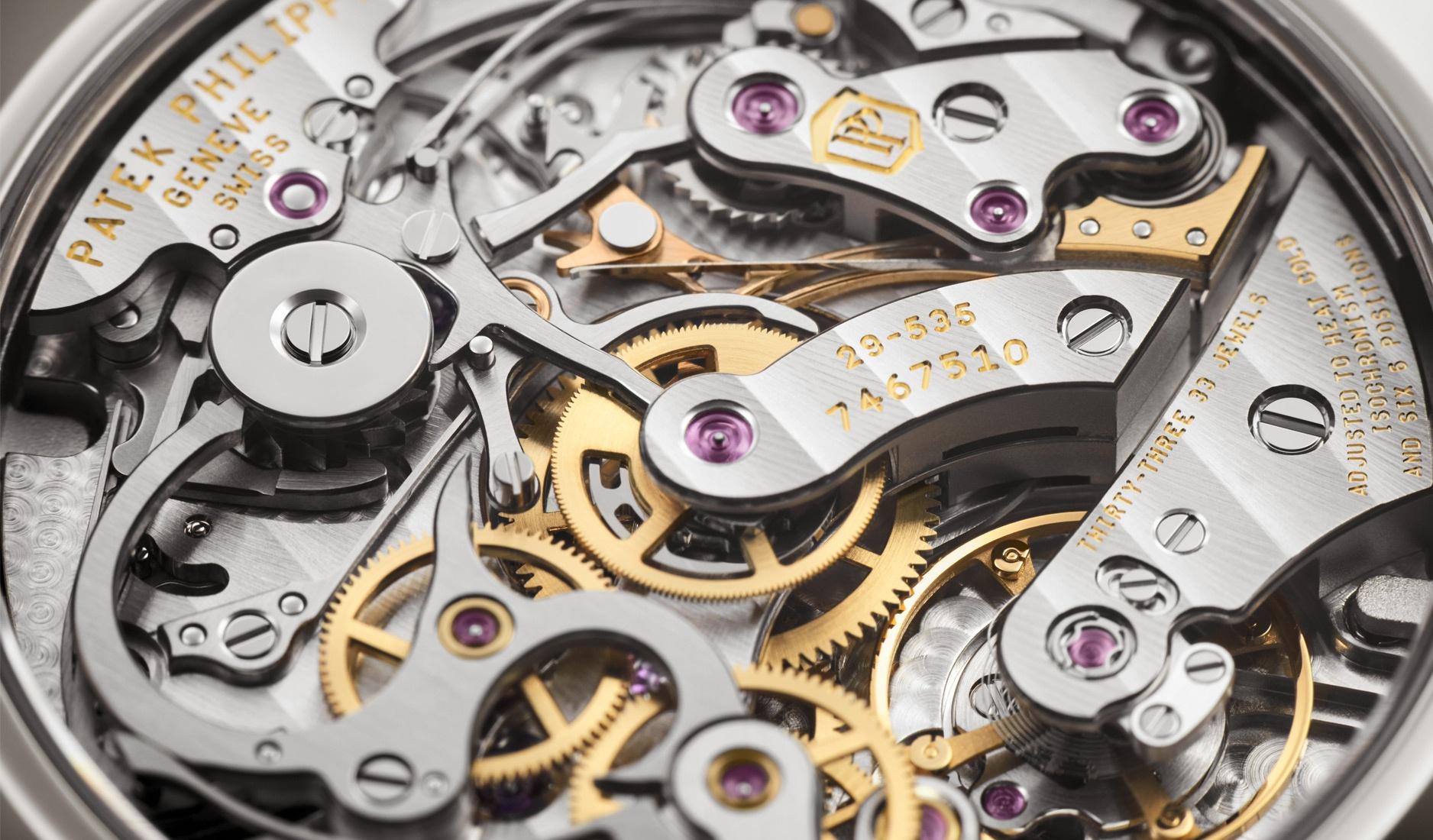 From combining the chronograph with other complications in the late 19th century to patenting chronograph-inspired innovations throughout the 20th century, to finally producing its own in-house chronograph movements from 2009 onwards, Patek Philippe’s journey in chronographs is reflective of its own evolution as a watchmaking house – one that is constantly seeking new milestones at the very apex of luxury horology.

Certainly, the journey has been marked by many iconic watches. The Ref. 1518, the world’s very first series perpetual calendar chronograph; the Ref. 2499 Moon Phase Chronograph famously owned by Eric Clapton; and the Ref. 7071 Ladies First Chronograph from 2009 that housed Patek’s first in-house chronograph movement, are just a handful of examples from Patek Philippe’s impressive canon of coveted chronographs.

Power Trio
And the list continues to grow. For 2022, Patek Philippe introduces three new chronographs that affirm this legacy while at the same time showcasing its evolutionary prowess.

Housed in 41mm white gold and fronted by a gorgeous rose-gilt opaline dial, the new Ref. 5172G-010 is a direct descendant of Patek Philippe’s first in-house chronograph from 2009. Here, Patek Philippe’s classically attuned vision of the complication is reinforced by the watch’s unabashedly vintage spirit, expressed by the traditional Arabic hour markers, a central chronograph hand flanked by a small seconds counter, and a 30-minute totaliser and tachymeter scale on the dial flange. 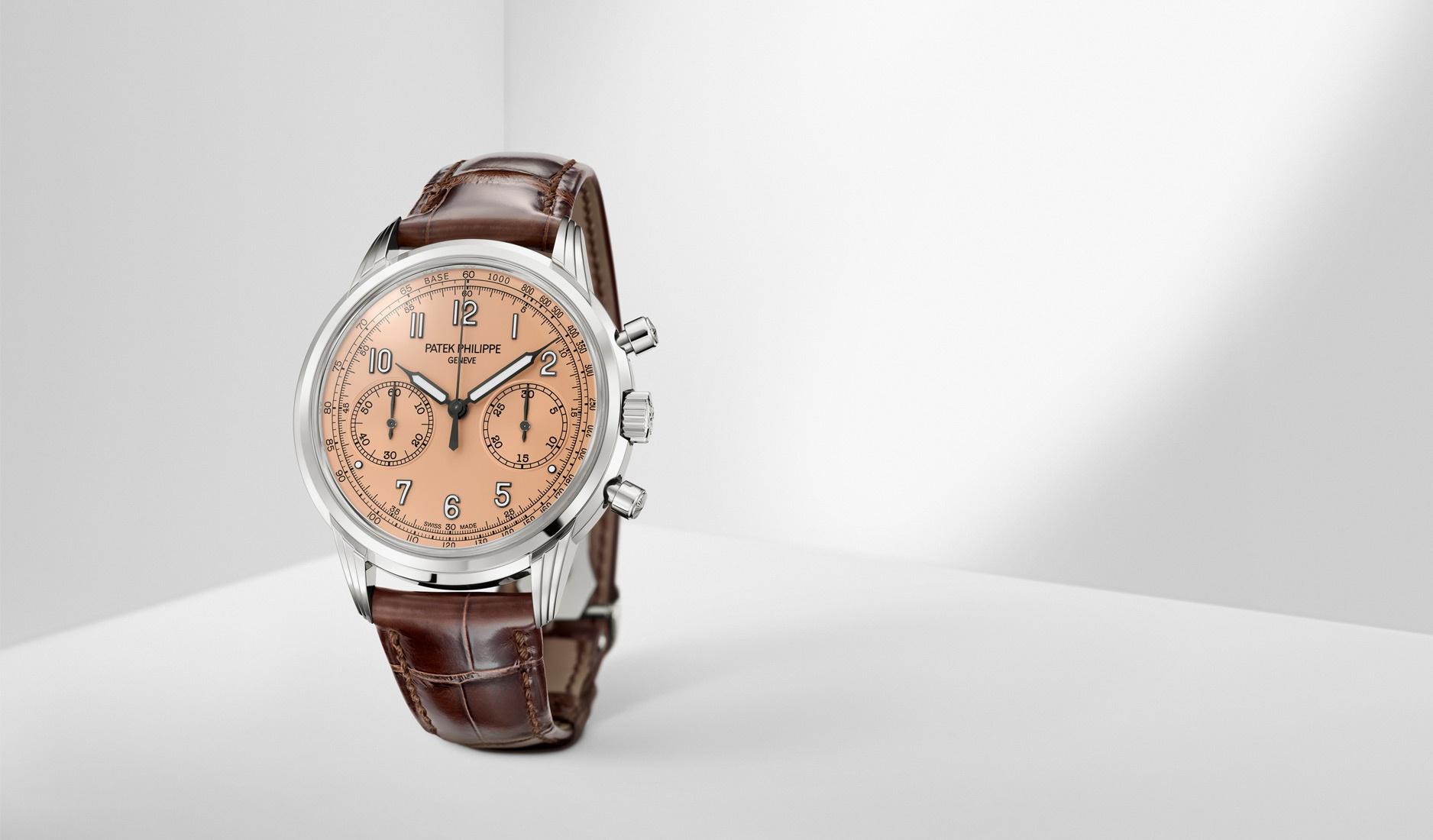 But it is the chronograph engine within that is the star. The Calibre CH 29-535 PS that powers the Ref. 5172G-010 is the same hand-wound movement that Patek Philippe debuted in 2009 – its first classically built chronograph movement that has been conceived and manufactured entirely in-house. Available for close inspection via an open caseback, the epochal calibre displays its exquisite construction and traditional architecture featuring column wheel and toothed-wheel horizontal clutch systems, as well as six patented innovations, including optimised tooth profiles and self-regulating reset hammers.

Patek Philippe’s second chronograph rollout for 2022 is the appropriately elevated Ref. 5270P Chronograph Perpetual Calendar. Introduced in 2011, two years after the launch of its first in-house chronograph, the first Ref. 5270 bore lineage to the Ref. 1518 from 1941, which featured the same combination of complications. On the new model, Patek Philippe amplifies the luxe and style while adhering to the original’s classical spirit. As regal as it is contemporary-looking, the new Ref. 5270P Chronograph Perpetual Calendar comes in a polished 41mm platinum case with two-tier lugs, polished pushers with brush finish at the sides, and a diamond tucked between the lugs at six o’clock. But it is the gradated green dial that will take your breath away. The richly coloured lacquered dial is captivating, transitioning seamlessly from black to green as it sets the stage for the facetted white gold markers and hands. Meantime, the chronograph and calendar displays are beautifully proportioned and harmoniously arranged, ensuring excellent legibility despite the myriad sub-dials and windows. As with all modern Patek Philippe chronographs, the aforementioned hand-wound Calibre CH 29-535 serves as a base movement for this dual-complication. 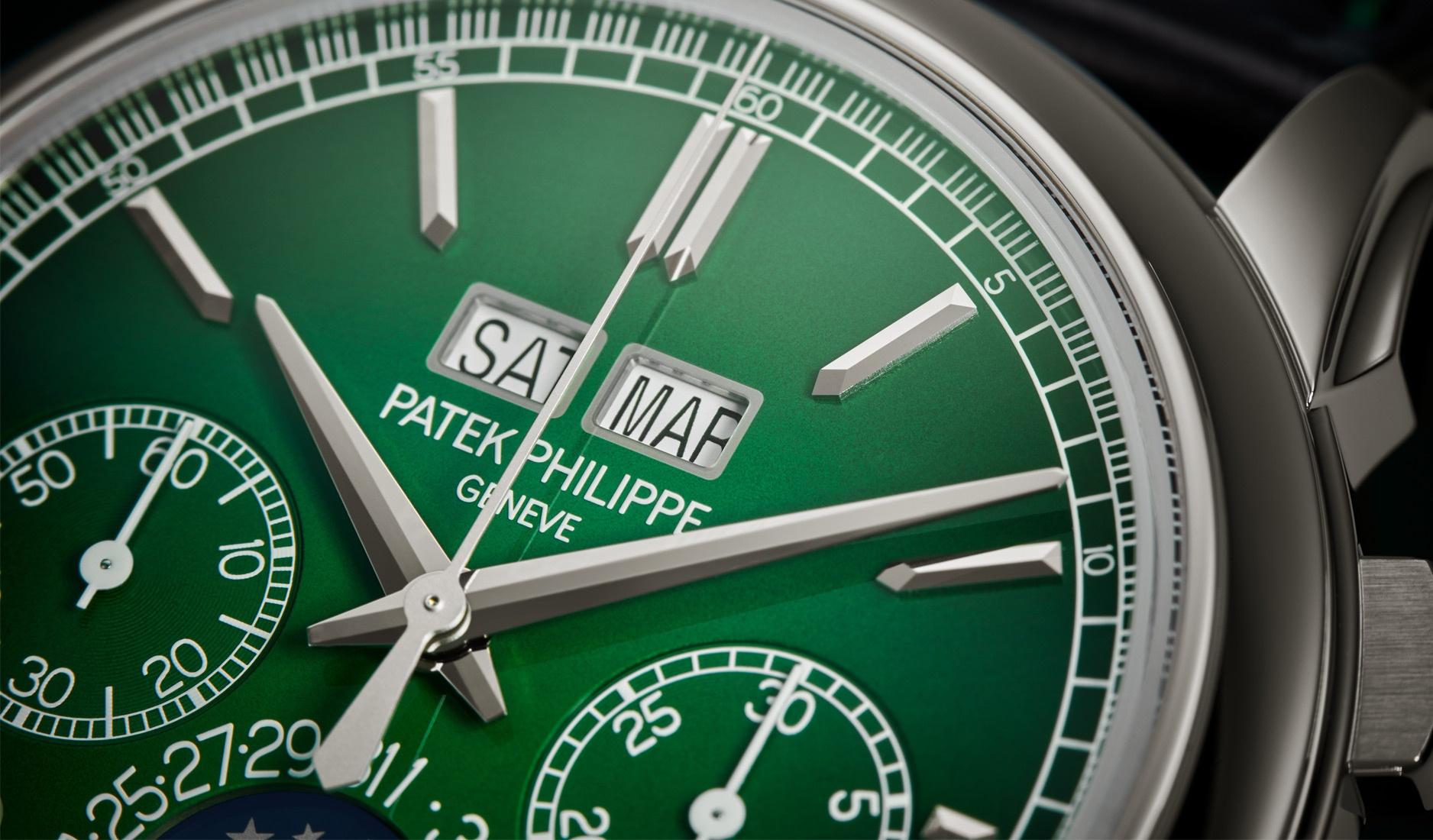 If the new Ref. 5172G-010 and Ref. 5270P Chronograph Perpetual Calendar are reminders of Patek Philippe’s chronograph lineage, the latest Ref. 5470P-001 takes up the mantle of demonstrating what lies ahead. Clad in 41mm platinum, it features a lacquered blue dial spiked with red accents and comes complemented by a fabric-patterned blue calfskin strap. While the Ref. 5470P-001 exudes forthright contemporary swagger, it is impressive to see that the watch has the goods to back up the look. 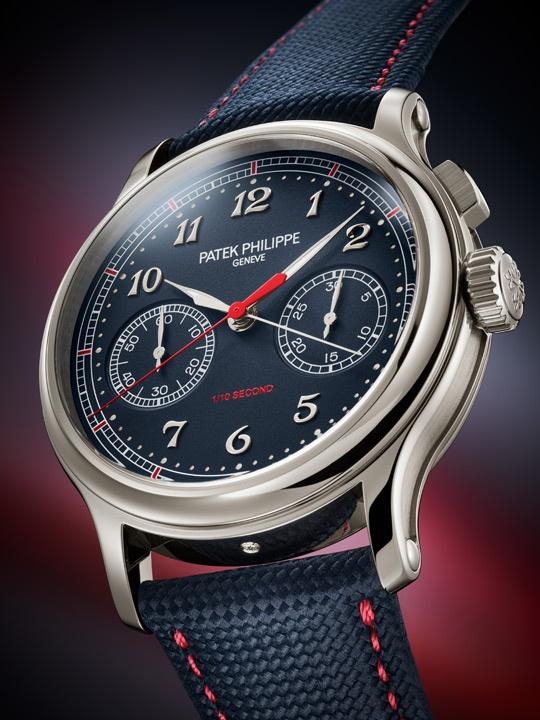 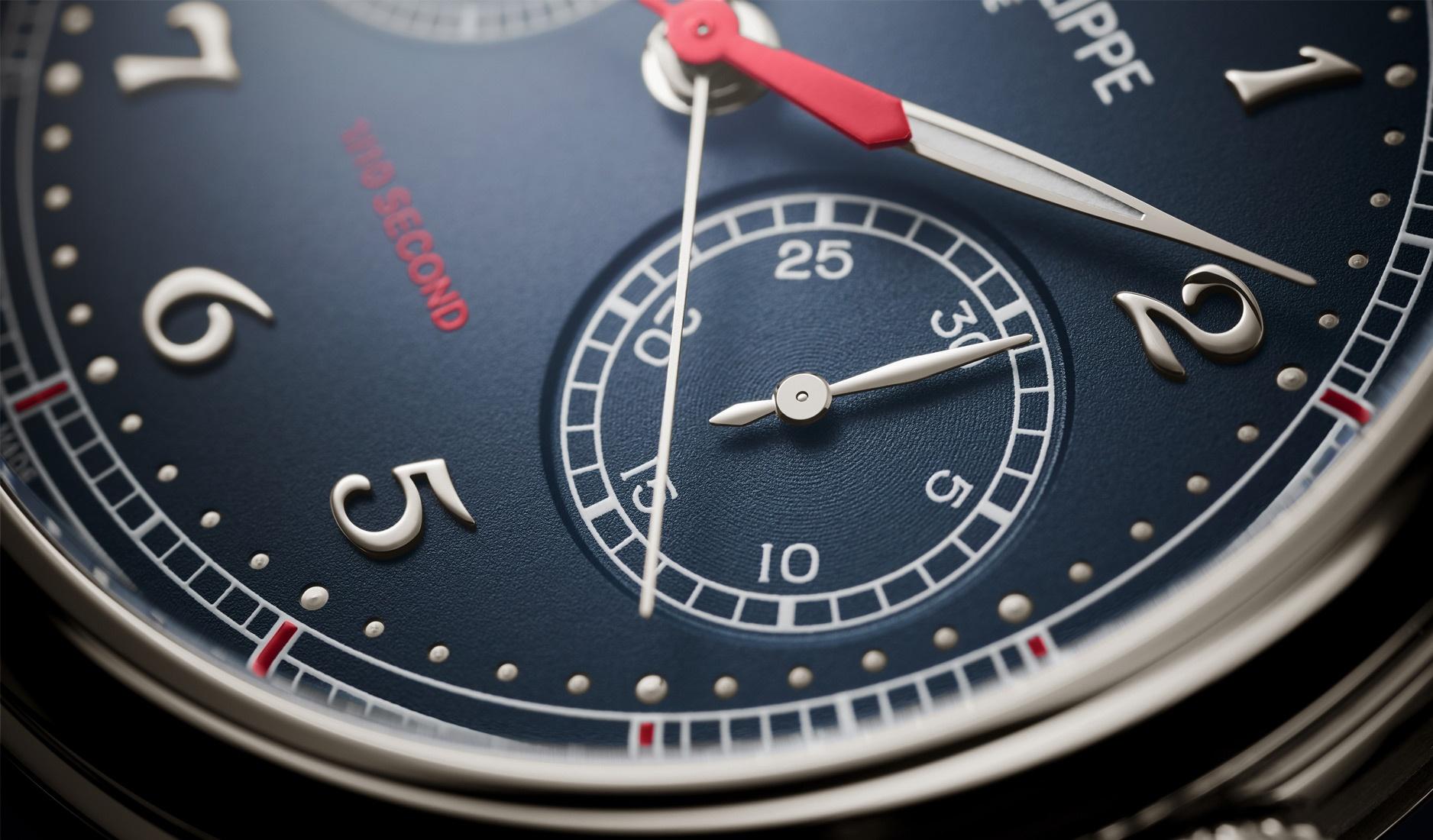 That’s not all. To ensure optimum precision and energy efficiency, the movement is reworked to beat at a higher frequency and with greater stability. To do so, Patek Philippe re-engineered the Calibre CH 29-535 to beat at a frequency of 36,000 vibrations per hour (up from 28,800 vibrations per hour). This was accomplished with a redesigned barrel arbour with a patented notch design and the inclusion of the high-tech Oscillomax regulating organ. Comprising a Pulsomax escapement, Gyromax balance, and Spiromax balance spring that are all made of Silinvar, the Oscillomax was developed in 2011 and was featured in the Advanced Research series of watches.

Whether the handsome Ref. 5172G-010 and the Ref. 5270P that show how far Patek Philippe has come with the complication or the technically progressive Ref. 5470P-001, this power trio shows, in no uncertain terms, why Patek Philippe chronographs are among the hottest watches for fiscally endowed aficionados.