Patek Philippe Revitialises The Aquanaut For 2021

Updates include on-trend green tones and a new two-time zone option for women. 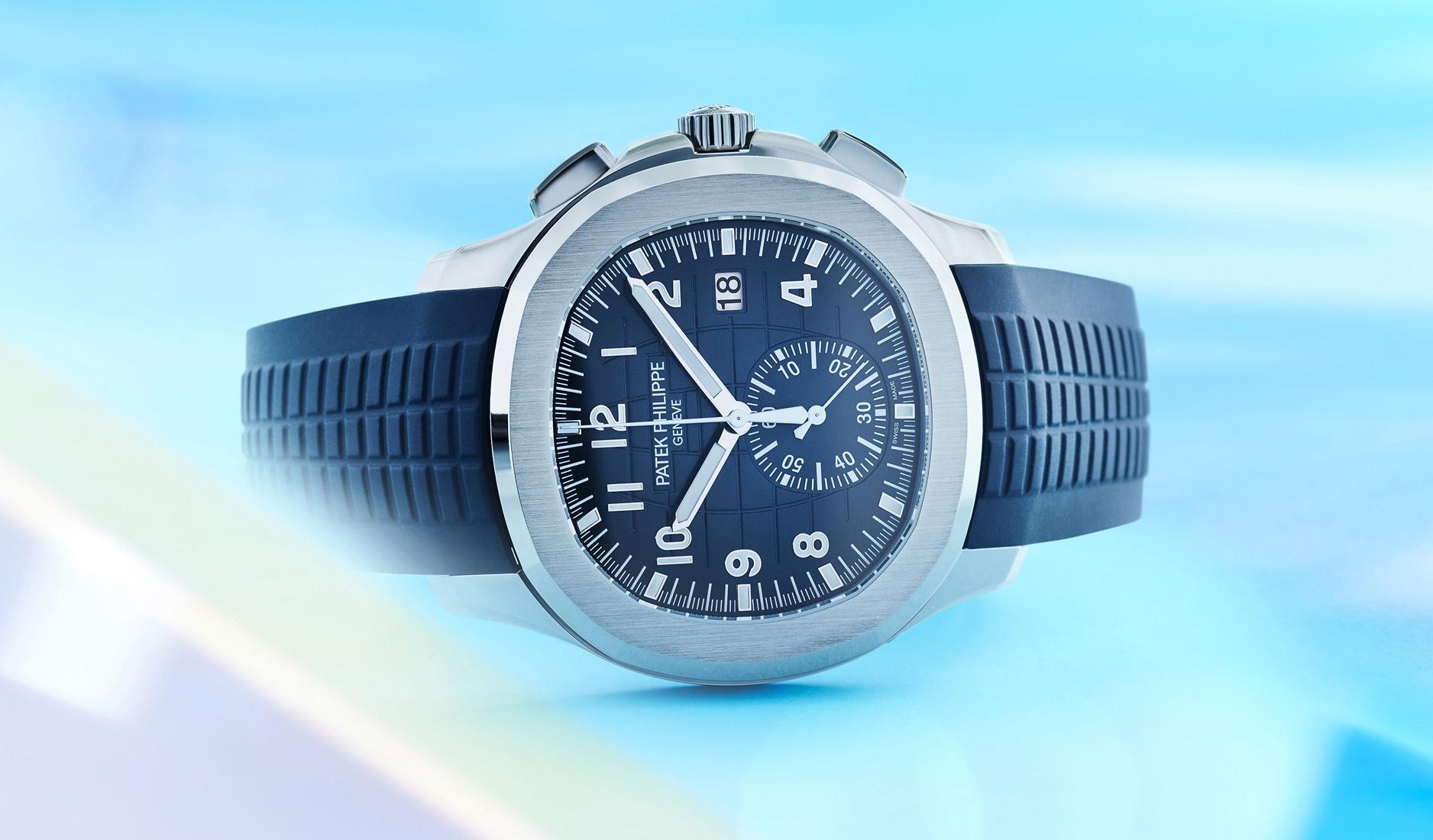 Within the Stern family that owns Patek Philippe, it is a tradition to gift someone who has turned 21 an Aquanaut. It is an elaborate coming-of-age present, by any means, but not as wild and inappropriate as, say, a Patek chronograph or minute repeater. “It would be impossible for someone that young to appreciate or understand a watch like that. An Aquanaut is just right for a young person privileged enough to own a nice watch,” explained Thierry Stern, at an earlier interview.

Having launched the Nautilus in 1976 as the flag-bearer of the company’s luxury sports watch offerings, the Aquanaut was introduced as a sibling collection in 1997, as Patek sought to welcome younger collectors into the fold. Some call the Aquanaut a Nautilus-lite. Though sounding a tad unfair, it isn’t entirely unjustified, given the Aquanaut’s creators’ open admission to taking inspiration from its epochal brethren. The watch’s case and the rounded octagonal bezel with alternate finishing certainly owes its design vocabulary to its predecessor, while touches like the embossed checkerboard pattern, with matching colours on the dial and strap, help establish the Aquanaut as a dynamic and novel collection on its own.

After more than two decades, the Aquanaut is now a full-fledged Patek Philippe icon, coveted by both budding and seasoned collectors. And this year, the line undergoes an extensive revitalisation with new references across the men’s collections, as well as the women’s repertoire, known as the Aquanaut Luce, which debuted in 2004. Indeed, while new men’s variants offer a few tantalising cosmetic switch-ups (more on those later), it is the ladies’ offerings that pique our interest most. 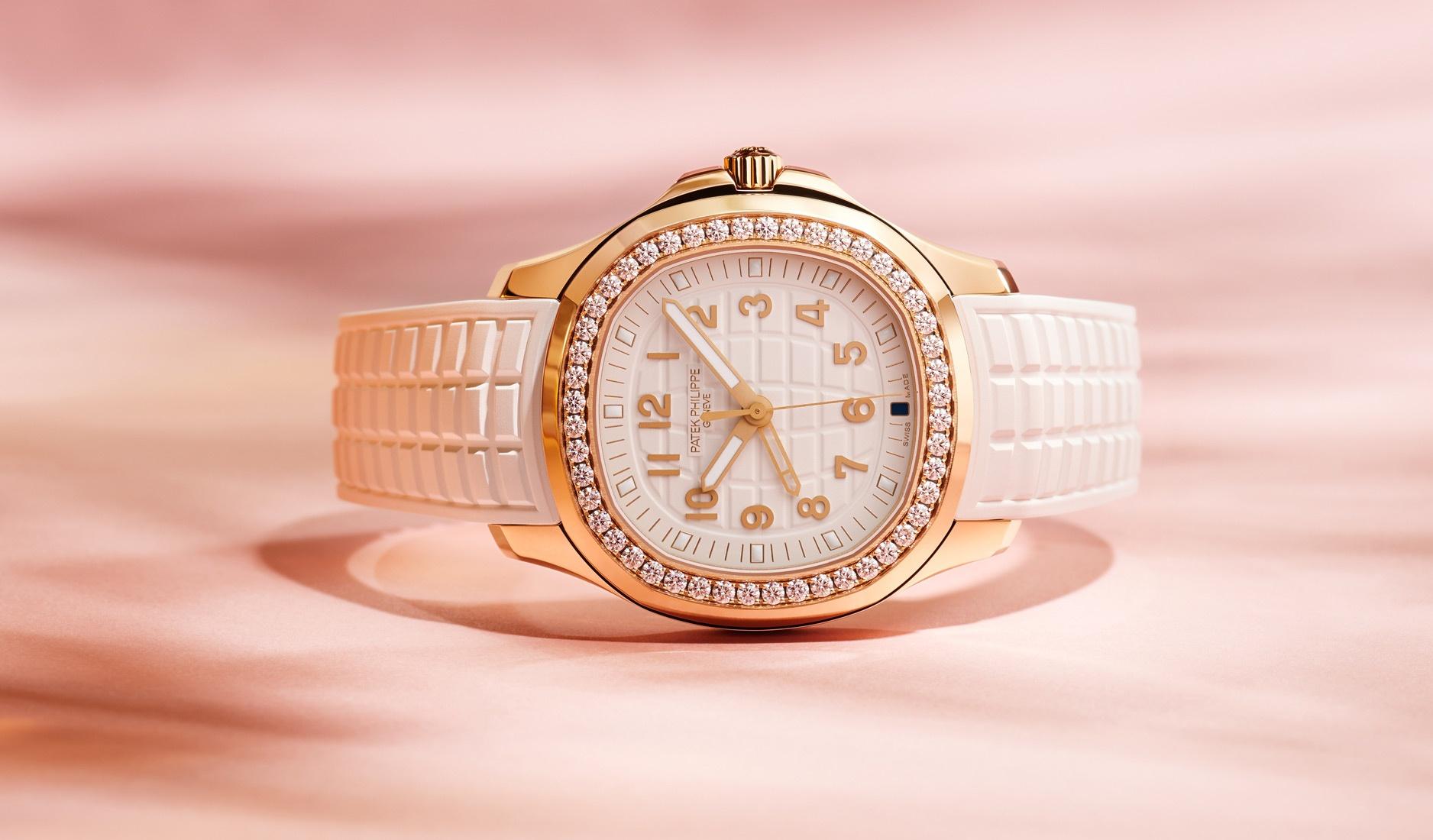 The headliner of the bevy of new Aquanaut Luce models, is the Ref. 5269/2009. Drawing inspiration from Patek’s Travel Time dual-time zone functionality and design – which also appeared earlier in the men’s Aquanaut Ref. 5164 – the ladies’ version comes with a quartz movement, but offers the same ease-of-use with single-crown operation, as well as legibility with the familiar additional skeletonised hour hand for the home time. As it is with the most alluring of Aquanaut Luce models, this version in 38.8mm rose gold is set with diamonds to amplify its resplendence. 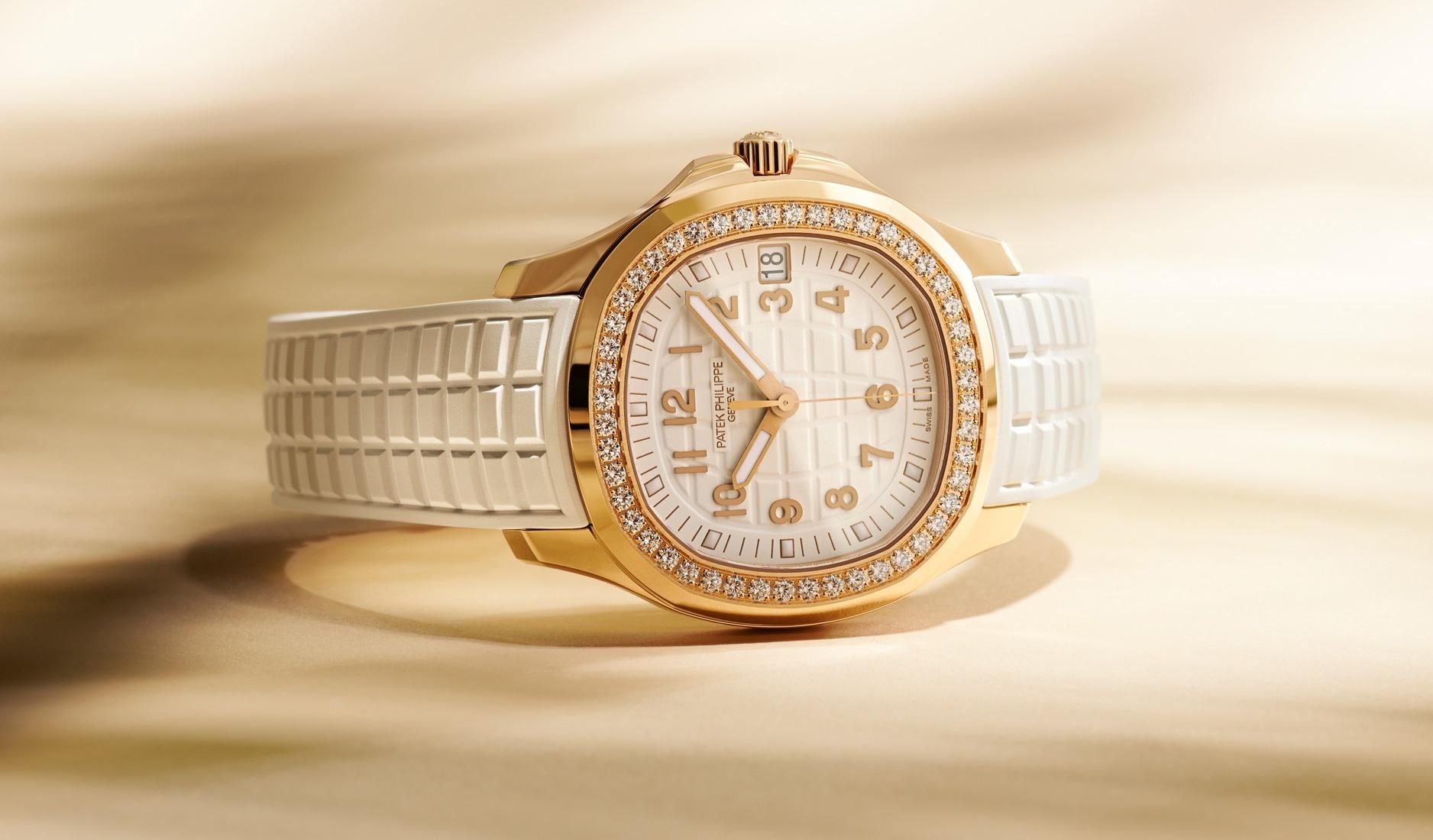 Making up the rest of this year’s Aquanaut Luce line-up, we have an automatic version in the same size and design as the two-time zone quartz model (Reference 5268/200R-001), as well as three steel variants, all in 38.8mm cases, in a choice of black, white or khaki green dial with matching strap. 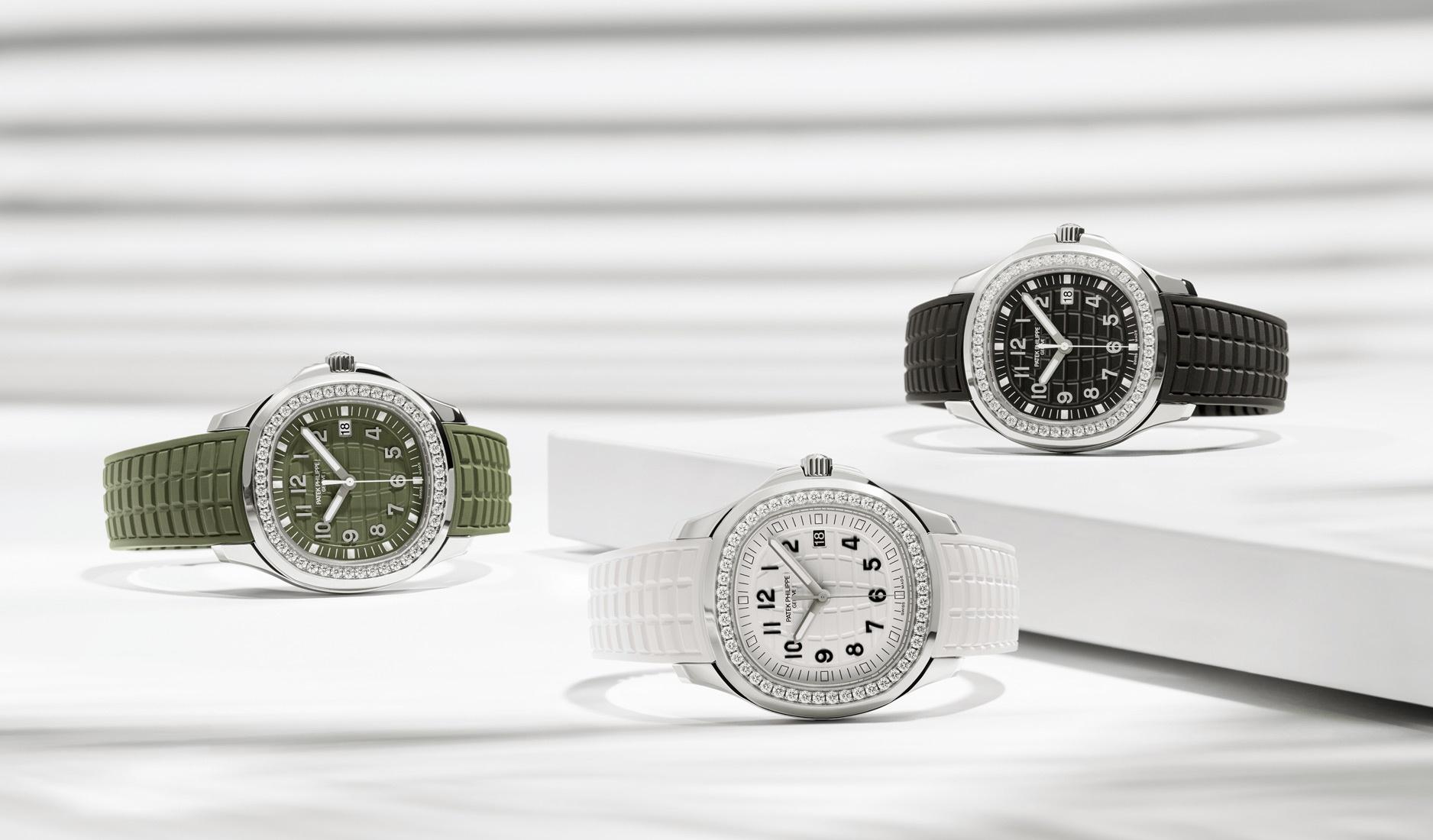 Over at the men’s side, the Aquanaut Chronograph Ref. 5968, which was introduced in 2018, gets up-luxed this year with two white gold models. Recognised by their 60-minute counters at six o’clock and central chronograph hands that also function as permanent seconds hands, the watches are driven by the automatic Calibre CH 28-520 C with flyback functionality and column wheel control, a movement that also powers numerous Nautilus chronographs. 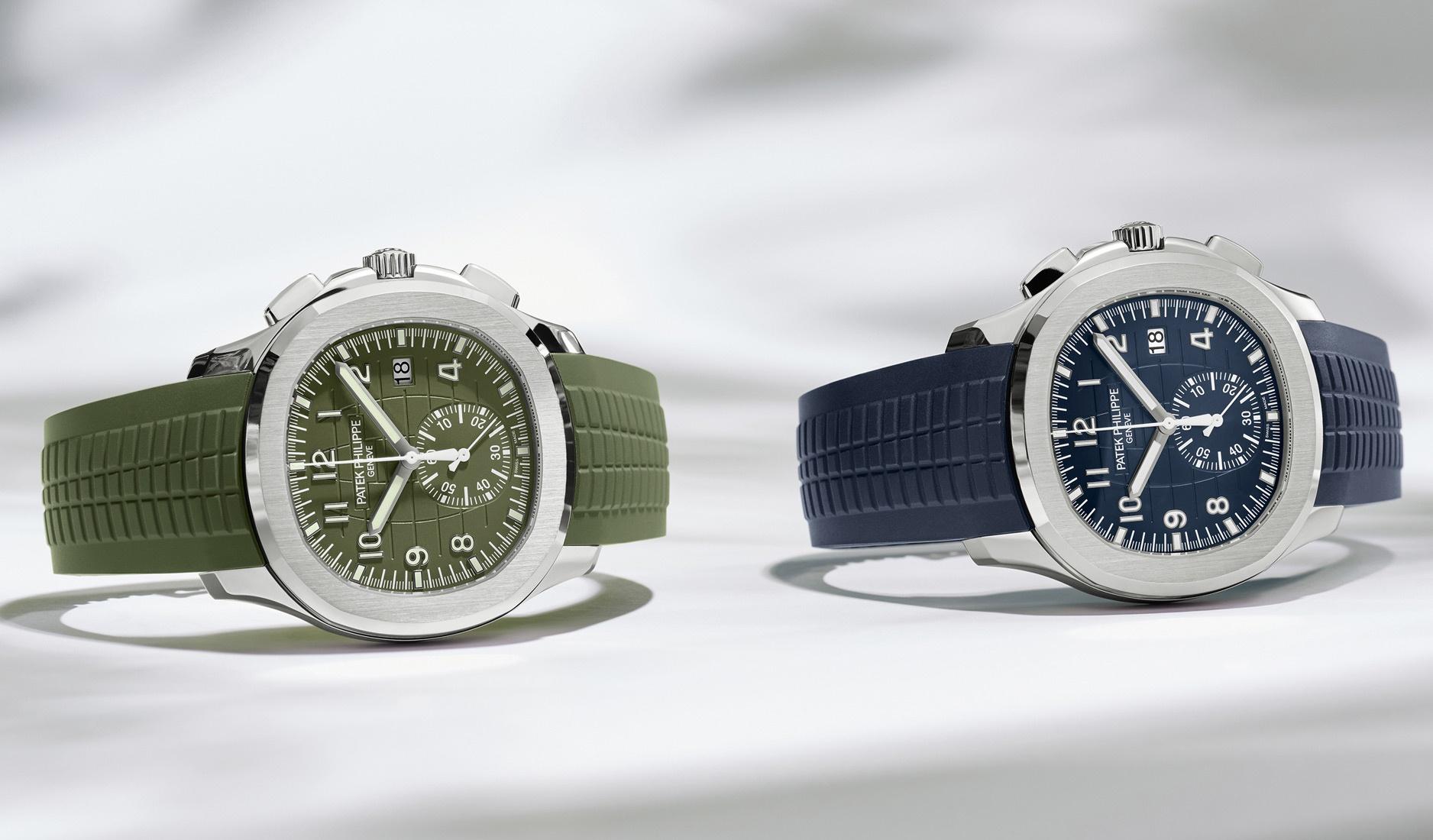 Despite the regal touch, the new white gold chronographs exude an air of sporty, casual nonchalance, thanks to their coloured dials in midnight blue or khaki green with matching strap. As youthful as they appear, though, the new Aquanauts show a collection that has deservedly earned its place amongst Patek Philippe’s league of icons – and certainly well past its coming-of-age phase.