As much as horology celebrates inner beauty, it is always the first impression that counts; the first thing that invites you for a closer inspection of the watch and, eventually, convert one from a curious onlooker into an obsessed devotee. Or, in local parlance, the first step to getting ‘poisoned’.

The effect is even more pronounced in the field of decorative horology. These rare, artisanal timepieces display feats of miniaturisation hewn from traditional handcrafting techniques passed down from generations effortlessly inspire wonder, joy, and the most jaded of collectors to reach for their credit cards.

From 16 to 26 June, Patek Philippe is celebrating the expansive and magical world of decorative horology at its annual ‘Rare Handcrafts’ showcase in Geneva. Among the brand’s extensive selection of over 75 pocket watches, wristwatches, dome clocks, and table clocks from its latest rare handcrafts collection, are six unique limited edition creations that exemplify the best of watchmaking artisanship. 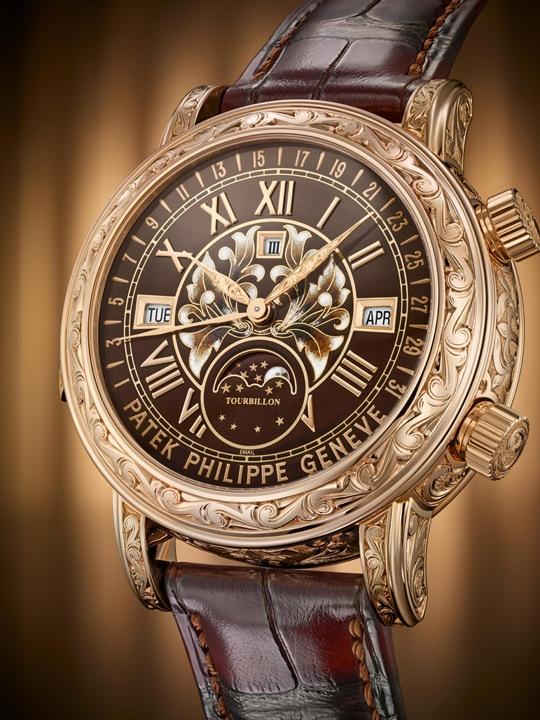 Patek Philippe’s second most complicated wristwatch has enjoyed the rare handcrafts treatment before with enamel dials, but this year’s version really dials up on ornamental beauty. Encased in rose gold, the dual-faced watch that boasts 12 complications features a new dial with brown grand feu enamel decoration using the champlevé and cloisonné enamelling techniques. With the former, the base metal must first be precisely milled out and the recesses manually filled with enamel compound. For the cloisonné enamelling technique that is executed in the middle of the dial, the pattern is made using a thin gold wire, which is filled out with enamel. Elsewhere, every millimetre of the case, crowns, repeater slide, and the fold-over clasp is manually engraved in a process that take over 100 hours. 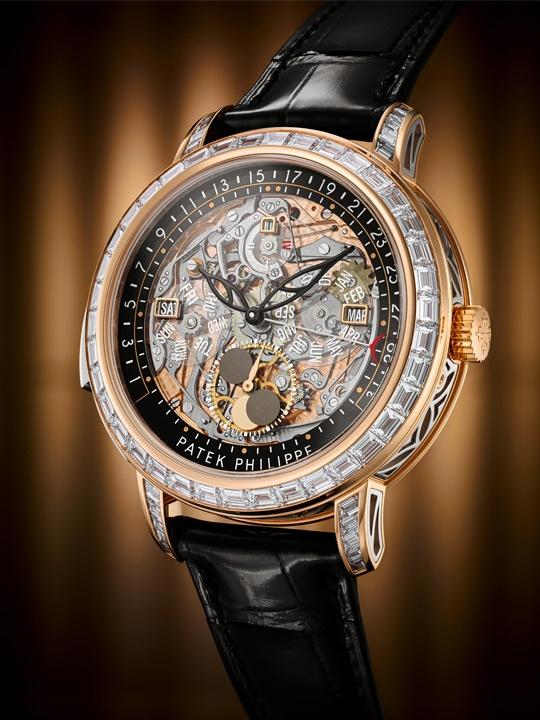 Mastery of open-worked dials and gem-setting take centre stage in this heavyweight complication. A step up from previous Ref. 5304 models with open-worked dials, this year’s creation sparkles with 80 flawless Top Wesselton baguette diamonds totalling 6.22 carats on its bezel, lugs, and fold-over clasp. The shower of stones only serves to accentuate the beauty of the mechanical movement and dial, featuring hands in black-lacquered white gold, steel components with bevelled and polished edges, and rose gilt plates decorated with perlage. On the case, white gold inlays with leaf motifs are etched into the case flanks and the repeater slide. 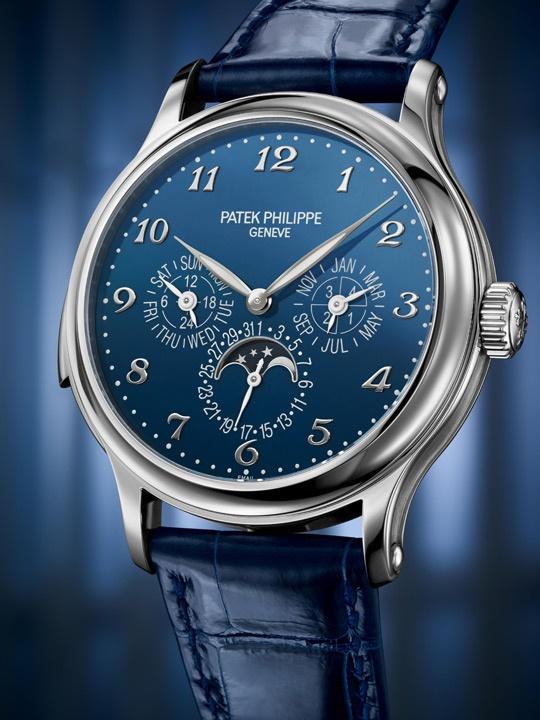 Introduced in a platinum case beneath a black grand feu enamel dial in 2016, this connoisseurs’ favourite returns in white gold with a blue grand feu enamel dial. Grand feu enamelling is an arduous process. Here, the watch’s 18K gold dial is coated with enamel powder and repeatedly fired in an oven that’s heated to about 850°C to achieve the pristine blue sheen. It takes a skilled enameller to ensure the lustre of the desired hue and that the dial doesn’t crack between firings. To fit the white gold hands, tiny holes are carefully drilled into the hard and brittle enamel – a ‘tiny’ process that demands just as much fastidiousness. 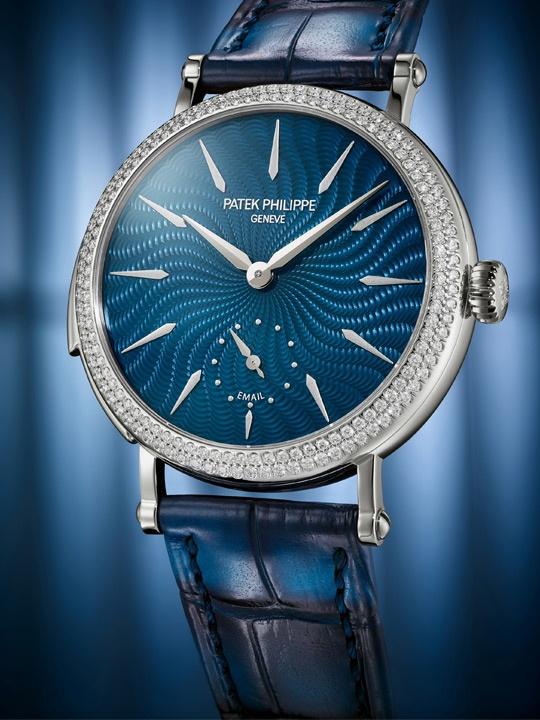 A gorgeous minute repeater for ladies, the Ref. 7040 was first introduced in 2011 in rose gold with cream dial. The ‘Rare Handcrafts’ version is an exquisite take, featuring a blue grand feu flinqué enamel dial and a diamond-encrusted bezel set with a patented technique. The mesmerising sunburst motif on the dial is made using the flinqué technique: first decorating the gold plate using hand guilloché, and then coated with transparent blue enamel that is then fired at high temperatures. The gem-setting is just as spectacular. The bezel is festooned with 168 flawless Top Wesselton brilliant-cut diamonds set in two offset rows using the patented ‘Flamme’ technique in which the artisan uses a sharp burin to cut notches in the gold between the individual stones to allow for maximum light penetration that endows the diamonds with unbridled sparkle and shine. 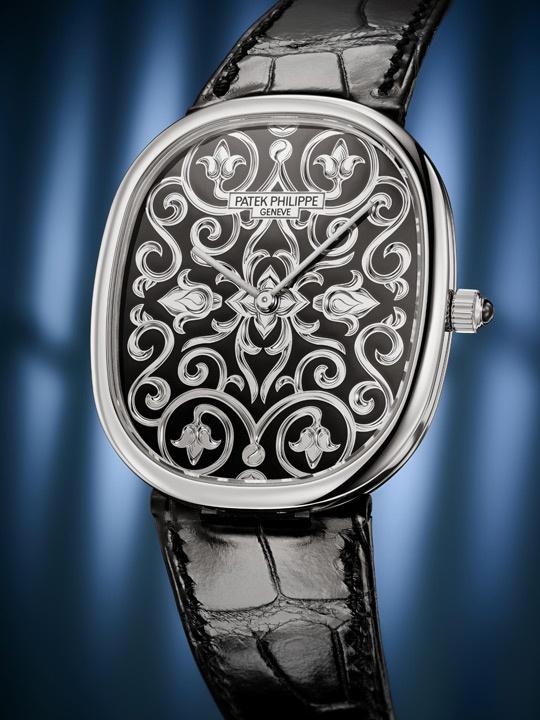 Bearing a wide dial, the iconic Golden Ellipse lends itself well to decorative flourishes. This was demonstrated back by a platinum model in 2018, which Patek Philippe rolled out to commemorate the 50th anniversary of the collection. This year, the model is revisited with a white gold version that features decoration made with champlevé enamel and manual engraving. The intricate hand-engraved floral motifs certainly command one’s attention. Playing an equally vital role in the visual drama, however, is the black grand feu enamel that sets the stage for the engravings. The gold dial is pieced individually, such that the recesses can be filled with black enamel that are subsequently fired in the oven for that deep, dark sheen to set off the arabesque flourishes. 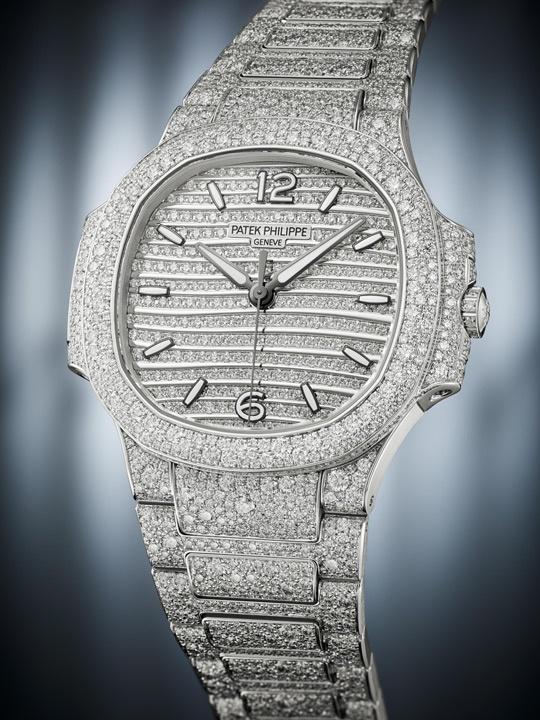 The most flamboyant Nautilus ever, the Ref. 7118/1450G Nautilus Haute Joaillerie delivers some serious sparkle with 2553 flawless Top Wesselton brilliant-cut diamonds totalling 12.69 carats. Set in white gold, the watch features the snow-setting technique that calls for a fine balance of precision and freedom of expression. The gem-setter first arranges diamonds of various sizes together in a manner that is both creative and highly calculated, such that the stones are set with as little visible gold between them as possible. The result is a stupendous show of glitter that fully justifies the name of its technique – a carpet of diamonds covering every inch of the watch, as captivating as holiday snowfall.