You won’t believe the stamina on this Oris.

Not to throw shade on other brands, but we’d challenge you to name a better value-for-money timepiece that matches up to the Oris Calibre 113’s power reserve. At S$8,600, this watch offers a jacked-up movement that lasts for up to 10 days on a full wind – that's easily about one-third of what you’d pay for something similar from another brand higher up the luxury ladder.

And in case the impressive spec hasn’t sunk in yet, again, it is TEN DAYS of power reserve. Meaning, you can wind it up on Monday, wear it throughout the work week, take an extended weekend getaway, and the watch will still have enough in its tank to last you till mid-week.

Obviously, the movement responsible for this feat is of no small matter to Oris. The Calibre 113, which the watch is named after, hails from a family of prestigious movements – the Calibres 110, 111 and 112 – the first of which was introduced in 2014 to commemorate the brand’s 110th anniversary.

Developed in-house like the rest of its brethren, the Calibre 113 shares the same base movement with the notable upgrade of an additional calendar module that displays the day, date, week and month. According to Oris’ press communique, this combination of a 10-day power reserve with full-business calendar is a world-first.

Speaking of ‘business’, this watch is designed to be office-appropriate, dressed in boardroom friendly finery with a well-laid out and sober dial interface. But that is not to say that one is limited when it comes to variety, though. The Calibre 113 comes in a range of dial colours with a choice of bracelet or leather straps. The bracelet options are a tad flashier for those who wish to work the boss-mode, but for greater mileage, we’d recommend this version with anthracite dial and leather strap – classy and contemporary at all once. 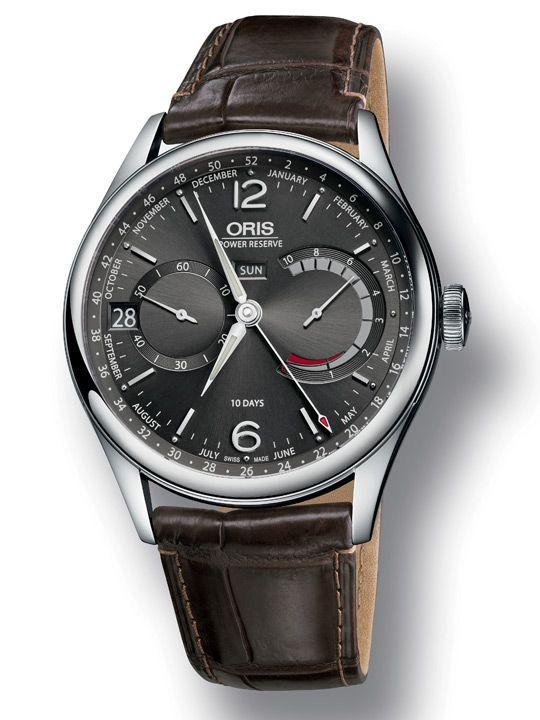