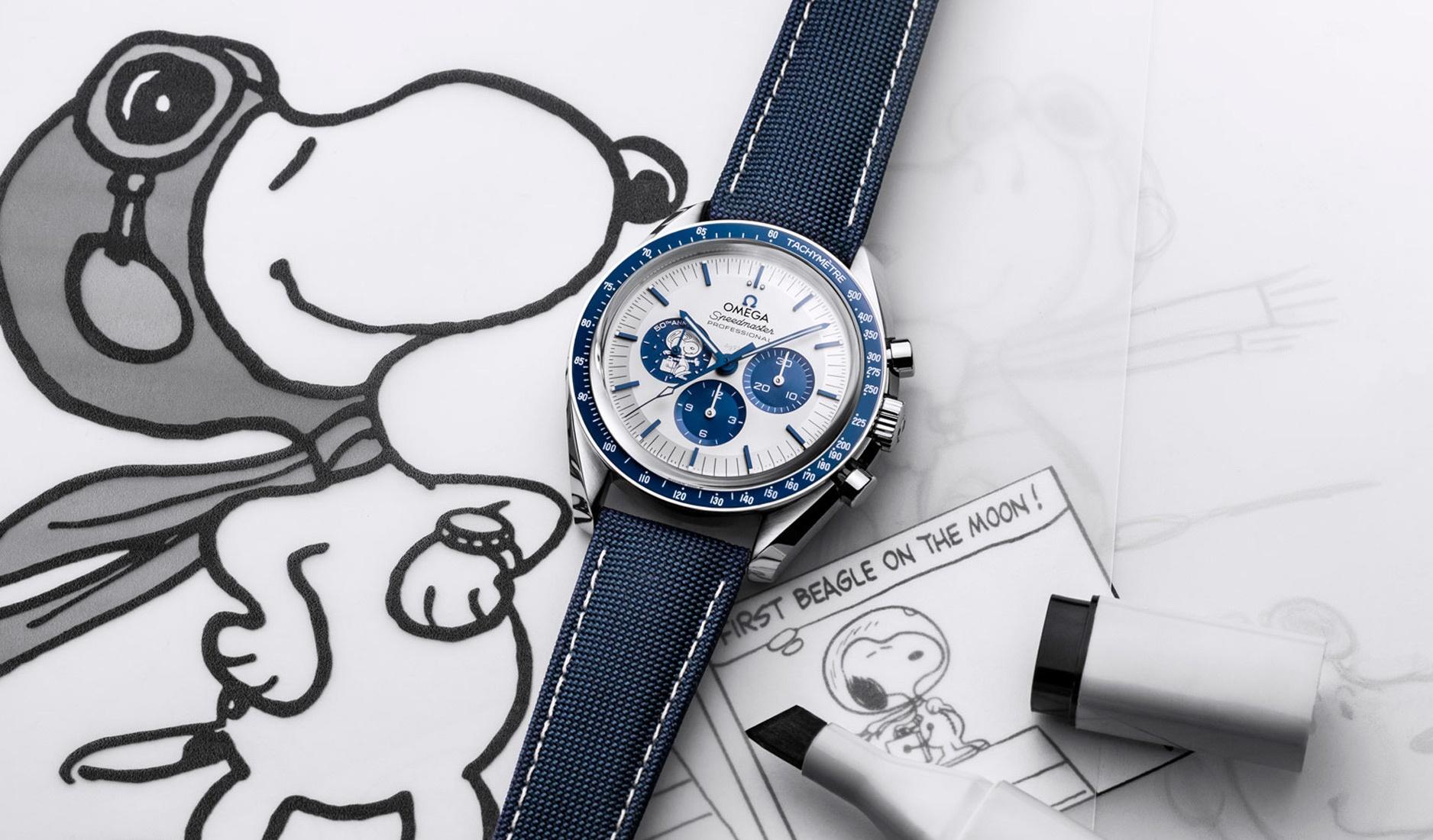 One of the most lovable and storied cross-pollinations in horology, comics and space travel, the Omega Speedmaster ‘Snoopy’ celebrates 50 years to the day when NASA presented the ‘Silver Snoopy Award’ to Omega, after its Speedmaster watch helped the crew of Apollo 13 survive an oxygen tank malfunction and full power shutdown in their spacecraft, enabling their safe return home by using the watch to time their re-entry to earth.

But what has a cartoon dog got to do with this? During the height of the Space Race in the 1960s, Charles M. Schulz was drawing his Peanuts characters in several strips that served as lighthearted looks at space travel, which turned Snoopy into an accidental mascot of sorts for the United States’ fixation with space exploration. That link became official in 1968, when NASA enlisted Snoopy as its ‘safety watchdog’ and face of its space programmes and, in doing so, introduced the Silver Snoopy Award to recognise flight crews and staff that have contributed significantly to human space flight missions. Till today, the Silver Snoopy Award is a rare and esteemed honour, bestowed to only one per cent of eligible participants. 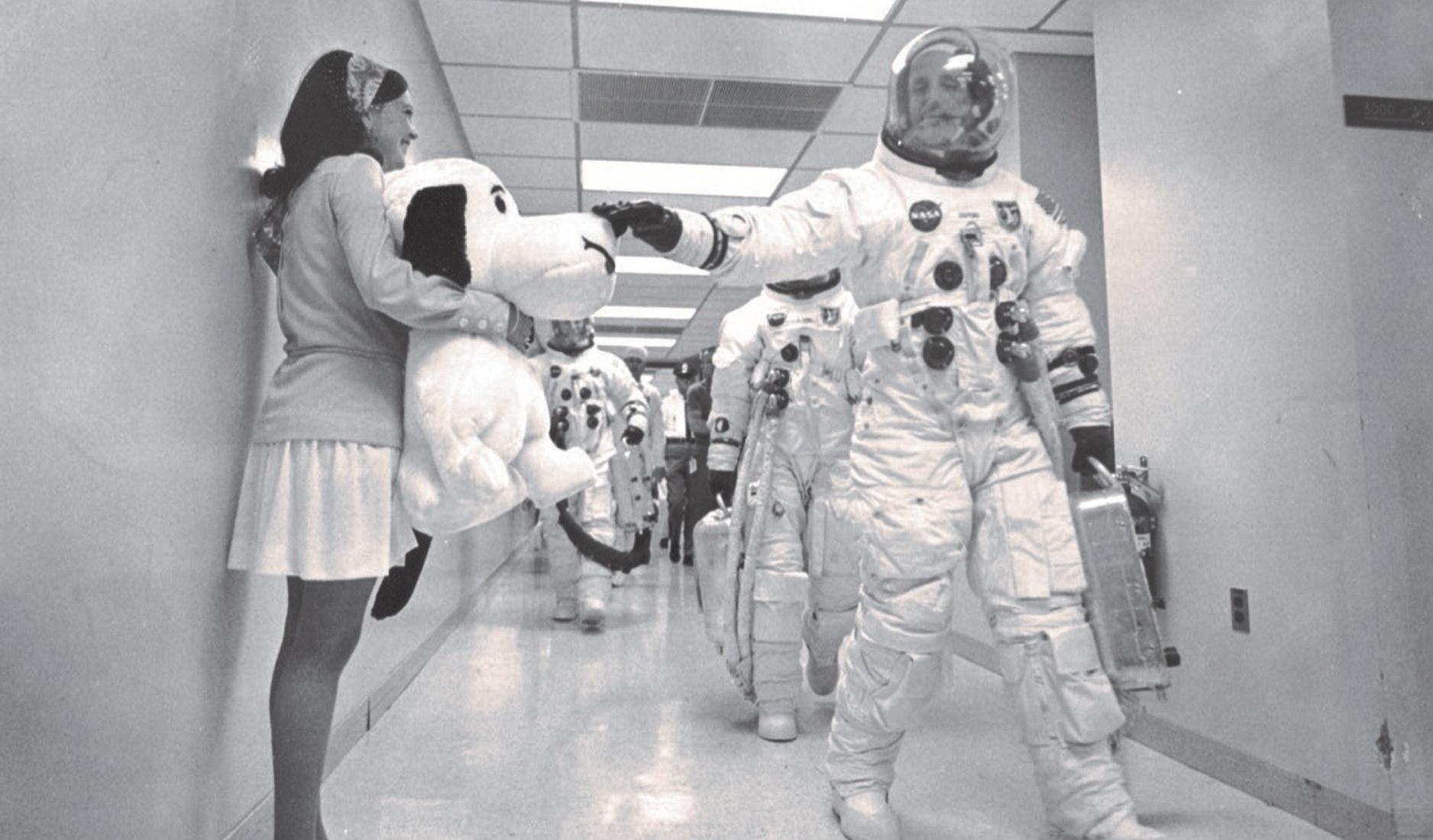 Astronaut Tom Stafford patting Snoopy before going on a mission

But back to the watch. The Omega Speedmaster ‘Silver Snoopy Award’ 50th Anniversary is a rare treat in among the hallowed Speedmaster line-up. Despite the long association, it wasn’t until 2003 when Omega offered the first Speedmaster ‘Snoopy’ watch, of which only 5,441 units were made, the number derived from the duration of the Apollo 13 mission (142 hours, 54 minutes and 41 seconds). The next time Omega issued a Speedmaster Snoopy was in 2015, on the occasion of the 45th anniversary of the Silver Snoopy Award. The second edition, capped at 1970 pieces, was said to have sold out in hours. Notably, both watches feature the beloved Snoopy in his spacesuit and scarf – the same drawing that’s on the NASA award, with the inscription ‘Eyes On The Stars’ – that would be a mainstay feature of the coveted timepieces.

This year’s Omega Speedmaster ‘Silver Snoopy Award’ 50th Anniversary looks set to join the cast and close 2020 as one of the year’s most sought-after timepieces. Interestingly, though, the watch is NOT a limited edition.

Like previous editions, the celebrated beagle once again takes its spot at the seconds sub-dial at nine o’clock, engraved with the words ‘50th Anniversary’ to commemorate the occasion. Clad in white and blue, the 42mm Speedmaster is modelled after the fourth generation Speedmaster – famously known as the ‘Moon Watch’ from 1969 – featuring a tachymeter scale, now rendered in blue ceramic with white enamel, featuring the ‘Dot Over Ninety’ detail. 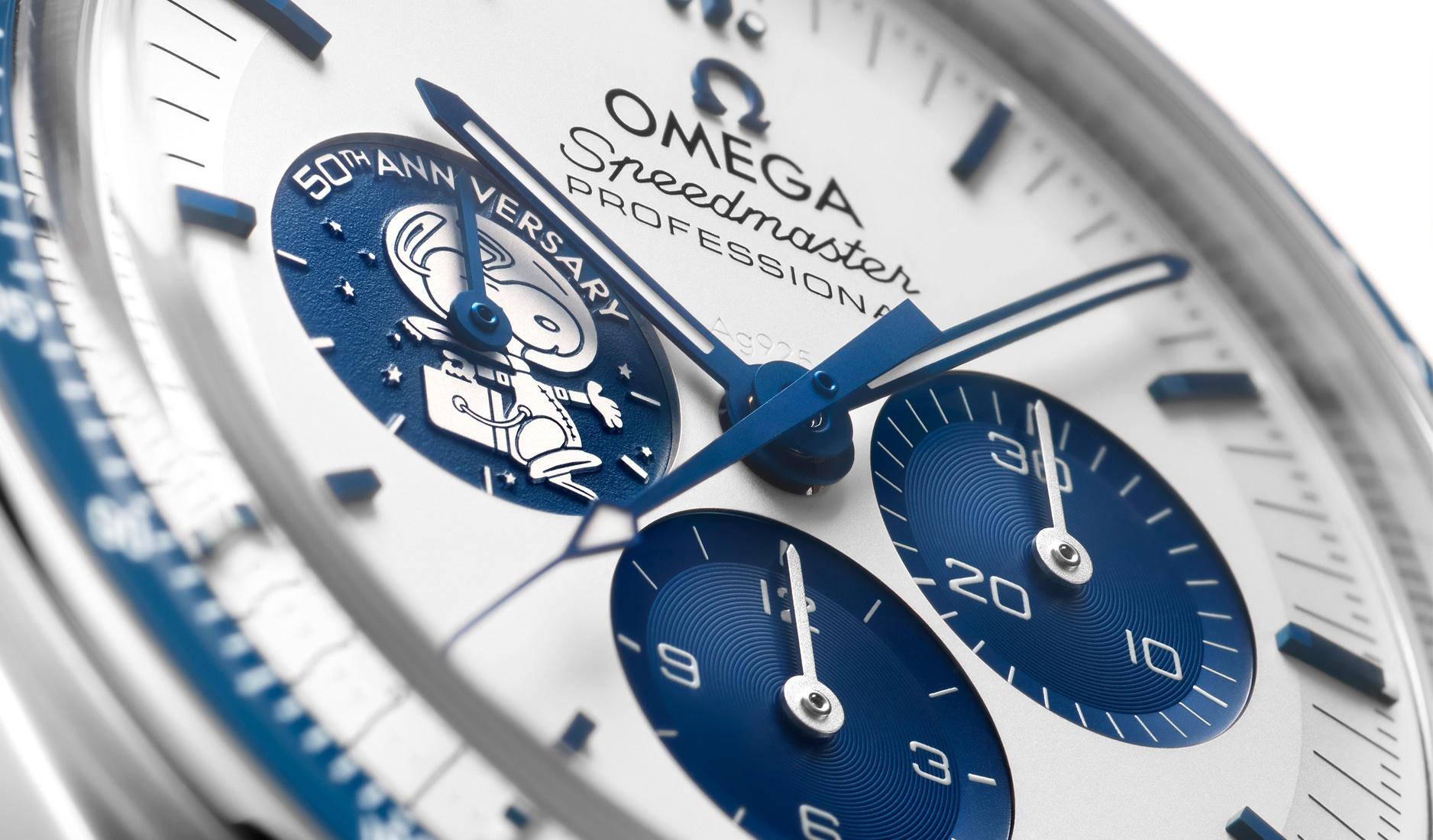 The caseback, on the other hand, is a whimsically animated affair, making the Speedmaster ‘Silver Snoopy Award’ 50th Anniversary most elaborate commemorative edition yet.

Against a backdrop of space travel showing a realistic depiction of the moon and earth (the former illustrated by a special micro-metallisation technique on the the sapphire crystal), Snoopy is shown inside a tiny spacecraft. When the chronograph function is activated, the ‘spacecraft’, which is poised at the top of an almost unnoticeable hand that mirrors the movement of the central chronograph seconds hand, starts to orbit around the caseback. Elsewhere, the watch’s nylon strap is imbued with yet another detail, its lining featuring the actual path taken on the Apollo 13 mission. 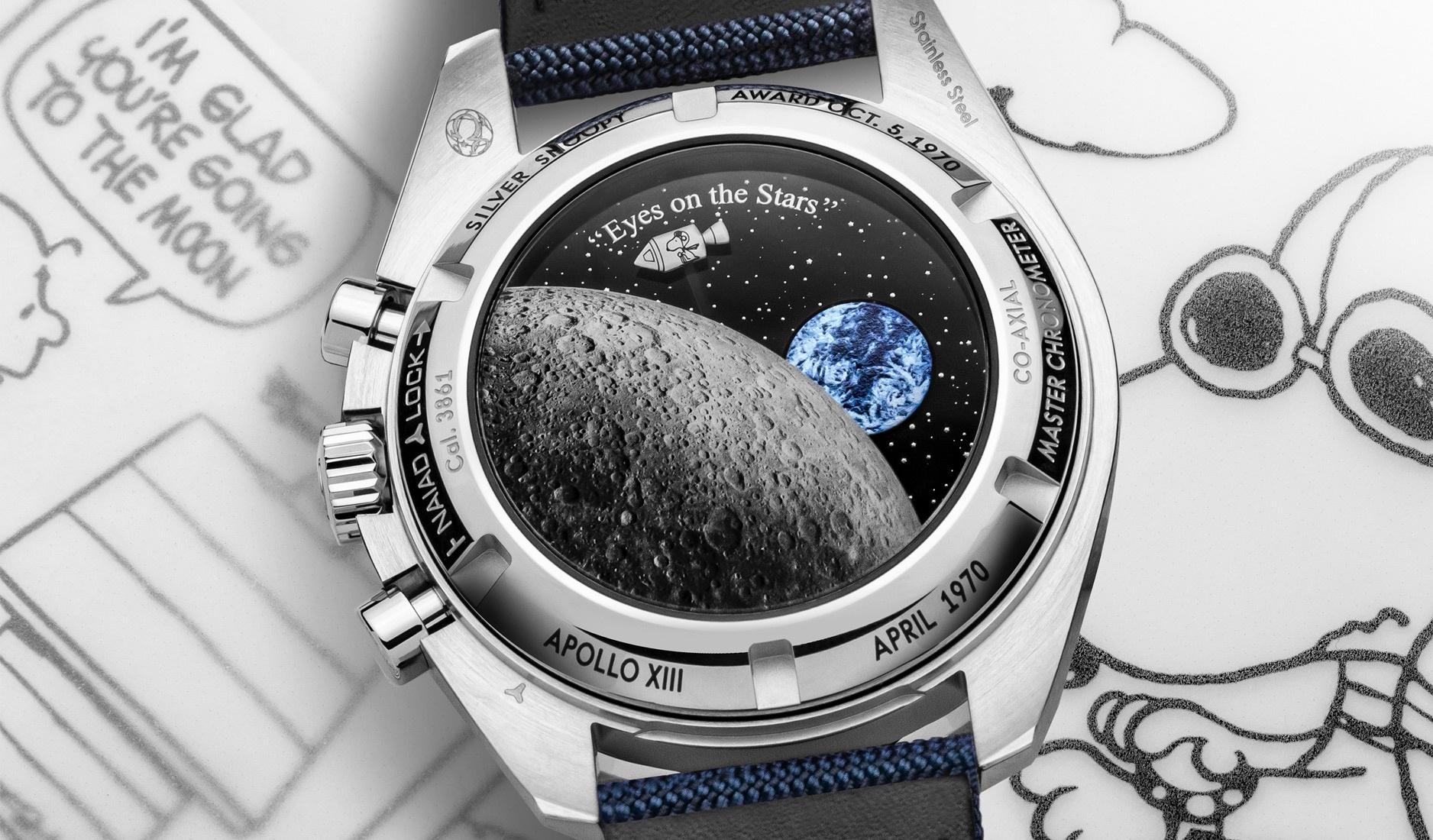 Despite the watch’s fun and cheery disposition, the Speedmaster ‘Silver Snoopy Award’ 50th Anniversary is backed by a no-nonsense engine in the hand-wound Calibre 3861, Omega’s METAS-certified movement with proprietary Co-Axial escapement and is resistant to magnetic fields of up to 15,000 gauss.

The commemorative edition comes in a special Apollo 13 presentation box with a magnifying glass for you to enjoy the details up close – and there are plenty to knock yourself out with. Priced at S$14,100, the Omega Speedmaster ‘Silver Snoopy Award’ 50th Anniversary is ready for blast-off. Anyone up for the trip? 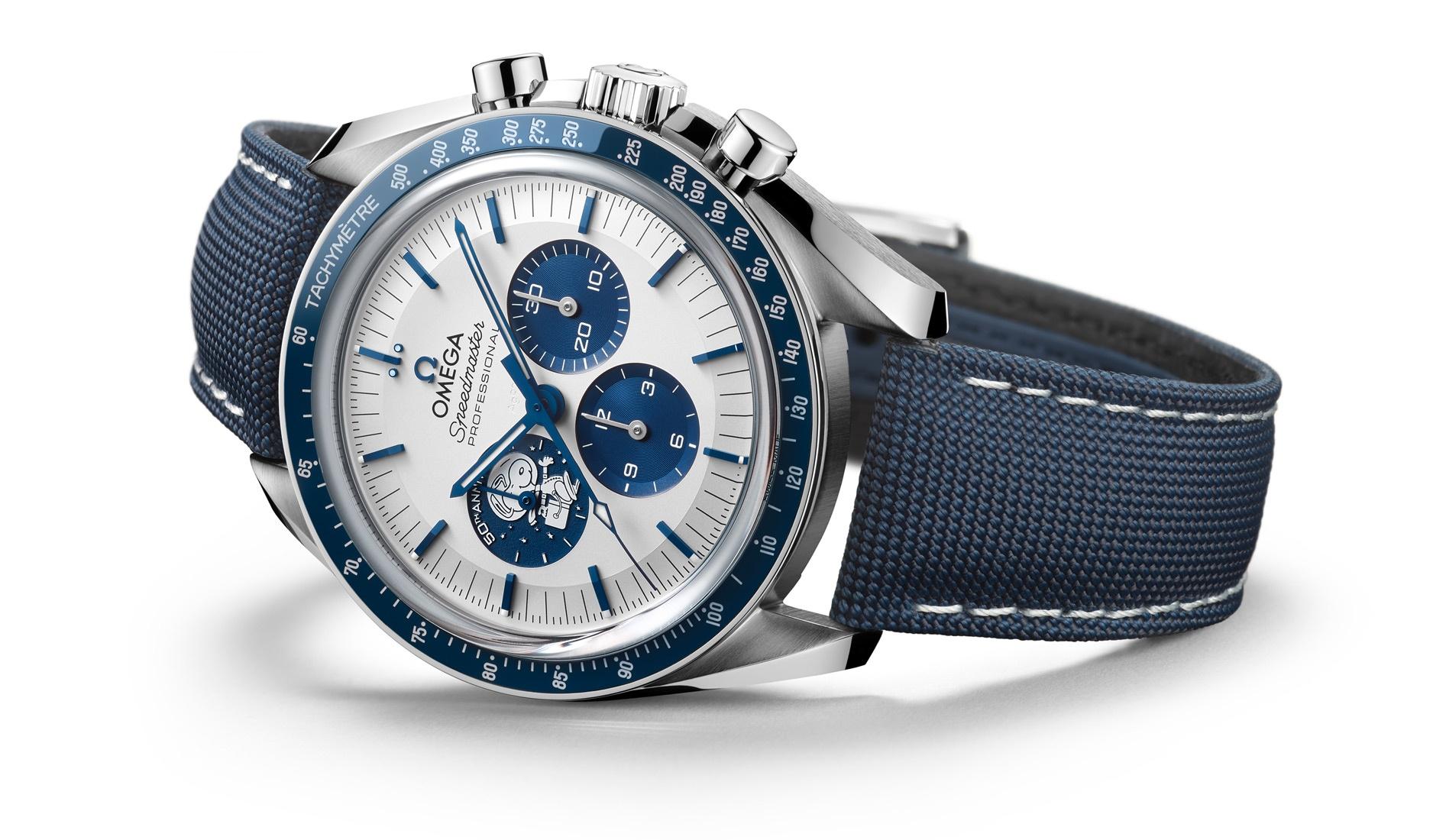