Would You Buy A Rolex Domino’s Pizza Watch? 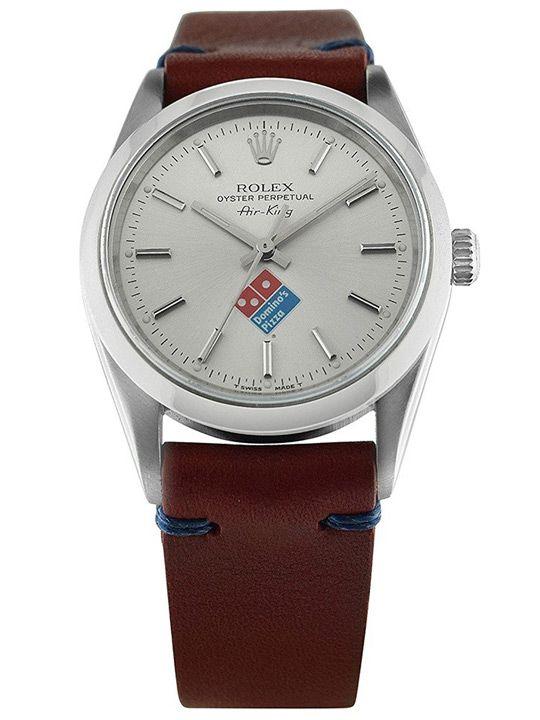 Last May, a Rolex Air-King with a Domino’s Pizza logo on its dial was offered on Amazon for US$3,395 (approximately S$4,800). That’s almost half the price of a brand new Rolex Air-King here. It's no longer available, in case you're wondering.

Apparently, the founder of Domino’s Pizza, Tom Monaghan, would reward well-performing franchise owners with a customised Rolex Air-King bearing the company’s logo. Whether that’s in good taste (pardon the pun) or not, it certainly gave franchisees an incentive to do well (meaning US$25,000 in sales every week for a month. The practice of gifting watches to Dominos staff started in 1977 when an employee asked Monaghan what he had to do to get the watch Monaghan was wearing (for the record, it was a Bulova with a Domino's logo). Monaghan told him to bring in US$20,000 in a week's sales (which he did) and then gave him the timepiece.

While the watch on Amazon must have belonged to a stellar franchisee, he or she evidently wanted to get some money out of it. But it's not the first time a co-branded Rolex has popped up for resale. In 2014, 17 Rolexes with the Tiffany & Co. logo were put up for auction at Sotheby's, from the collection of New York socialite Bunny Mellon. The watches were meant as gifts for her guests at a party that eventually failed to materialise. More on that here.

It's not altogether uncommon to see co-branded Rolexes around since there are also Coca-Cola and Cartier ones floating around. But the company has since stopped this practice. That makes all the co-branded editions pretty much collectors' items, especially the rarer ones with Cartier and Tiffany & Co.

And although we’re not crazy about the Domino's watch, we do adore the Air-King (read more about it here). Plus, it’s a lovely gesture to reward good performance. Just that we'd like our watches without all the toppings please.