They are not gonna be everyone’s cup of tea, but they are all for a good cause, ok?

First things first. The Only Watch auction is all about shining a spotlight on Duchenne muscular dystrophy (DMD). A severe form of degenerative neuromuscular disease, DMD primarily affects boys, and kids suffering from it experience progressive muscle degeneration and weakness. This is due to alterations of a protein in their bodies called dystrophin, which holds muscle cells together. It wasn’t until not too long ago, that boys with DMD were able to survive beyond their teens.

The founder of Only Watch, Luc Pettavino, started the initiative after his son was diagnosed with DMD in 2004. His objective was to raise awareness and research funds to find a cure for DMD. One hundred per cent of the Only Watch sales proceeds go to the Association Monégasque contre les Myopathies, a Monaco-based organisation with an international network of laboratories that develops therapeutic approaches such as gene therapy, cell therapy and repair of mutated nucleic acids.

A biennial charity auction, in which participating watch brands each submit a piece unique to be sold, the previous eight editions of Only Watch raised over €70 million. That’s some serious dough going into a noteworthy cause.

As a horological event, the concept is also simply off the charts. From mainstream heavyweights to mid-luxury brands to cult independent marques, the watchmaking community turns up with remarkable one-off creations that allow them to flex their creativity while doing good at the same time. And each time, there would be a slice of history being made, such as Patek Philippe’s smashing the record for the world’s most expensive watch with a hammer price of US$31 million with the stainless steel Grandmaster Chime ref. 6300 in 2019.

A total of 54 brands are participating at Only Watch 2021, which takes place on 6 November. Here is a totally biased list of five that have caught our eye – and perhaps, yours, too? Nothing beats horological swag that does much more than simply elevating your wrist presence. 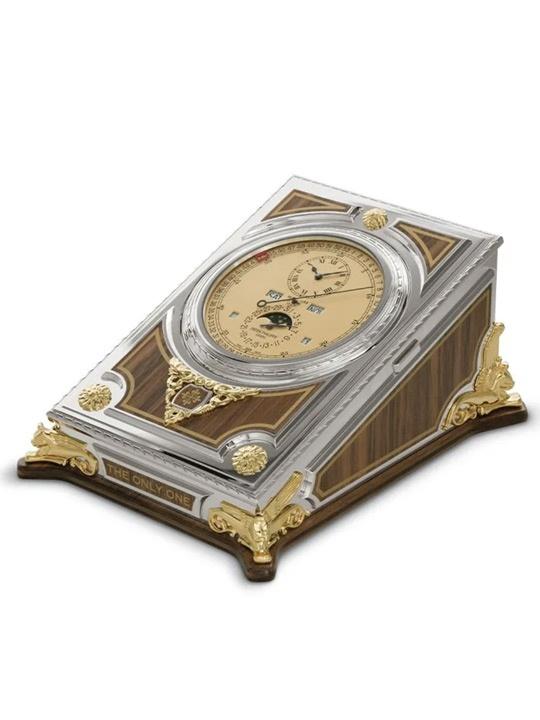 This sure came as a surprise. Patek Philippe typically issues a one-off wristwatch complication for its contribution to Only Watch, but has decided to switch things up for this edition with a table clock that features a perpetual calendar. The ornate timekeeper is modelled after a vintage piece that was once owned by American tycoon, James Ward Packard, which is currently in the Patek Philippe Museum. The reinterpreted version for Only Watch 2021 is encased in a sterling silver cabinet with vermeil decorative elements and American walnut inlays. The movement inside is the new Calibre 86-135 PEND IRM Q SE with perpetual calendar and 31-day power reserve. 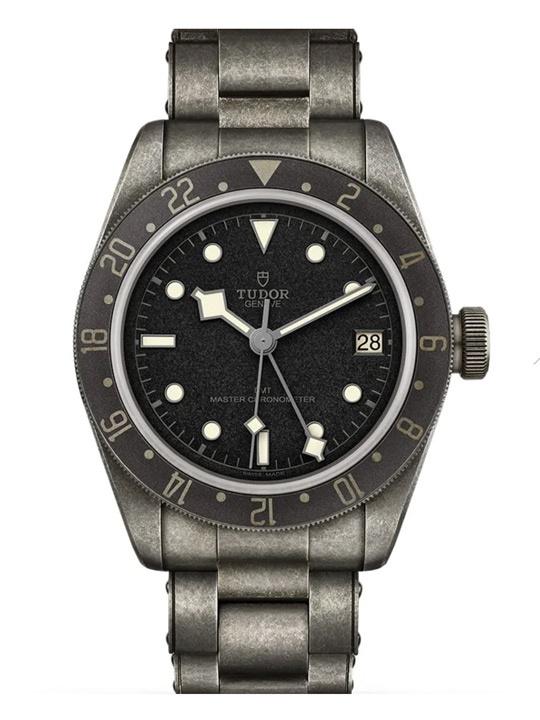 The Black Bay GMT One is a riff on a model released in 2020, which came in steel with ‘Pepsi’ bezel and two-time zone automatic movement offering 70 hours of power reserve. This piece unique’s performance specs now boasts additional certification as a Master Chronometer, which guarantees 0/+5 daily precision as well as anti-magnetism to 15,000 gauss. Evidently, the Black Bay GMT One is another example of Tudor’s recent forays into exploration of materials in its regular series, having released Black Bay models in silver and gold this year. Its Only Watch 2021 contribution is sheathed in aged stainless steel, which accords the hard-performing timepiece the kind of battle-hardened appearance it deserves. 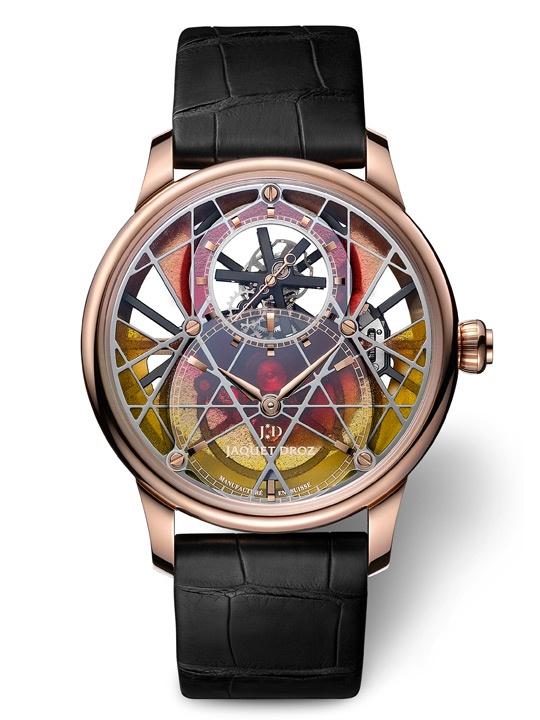 Like 2019, Jaquet Droz is submitting its modern take on the skeleton watch, the Skelet-One, for Only Watch 2021. Only this year, the brand, which also happens to be celebrating its namesake founder’s 300th birth year, has upped the technical and artisanal ante on the watch. While the movement still features the same skeletonised architecture, it now features a tourbillon at 12 o’clock with silicon balance spring and pallet lugs, atop the signature off-centered dial. The most stunning feature on this rose gold watch is its plique-à-jour enamel dial, comprising pieces of translucent enamel in gradated shades of yellow, orange and red that obscures the movement ever so slightly with its stained glass effect. 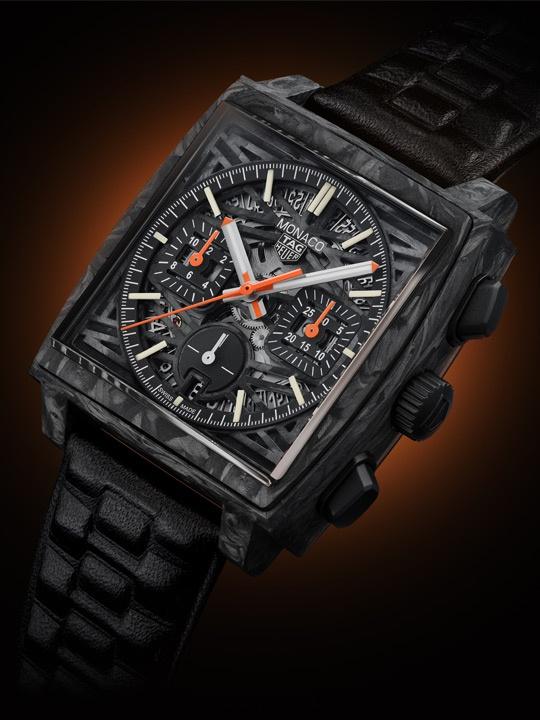 TAG Heuer’s fabled Monaco ‘Dark Lord’ from the 1970s gets a new lease of life for Only Watch 2021. The original all-black Heuer Monaco, which is sheathed in black PVD, is highly coveted and pieces in mint condition are a rare sight at auctions. With the Carbon Monaco for Only Watch 2021, TAG Heuer gives one deep-pocketed collector to own a modern version, which features a liberal use of carbon on the case and skeletonised dial. Even the hairspring on the Heuer 02 automatic movement is made of carbon, making this one-of-a-kind timepiece as progressive as it is unique. 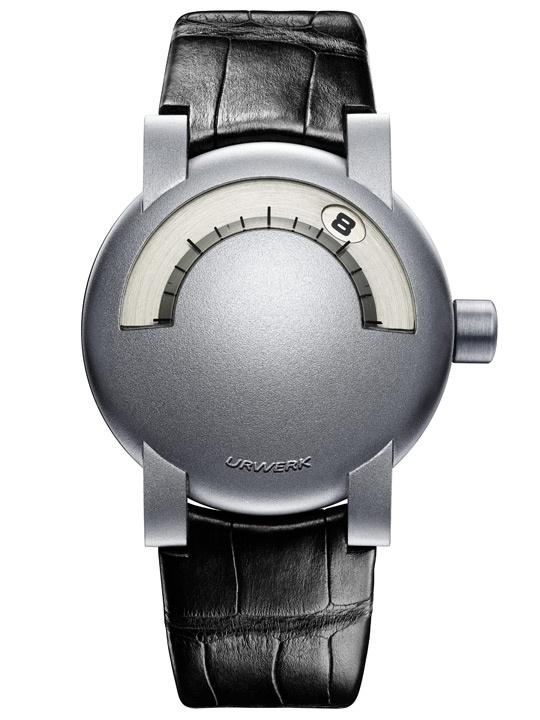 Urwerk takes us way back with the UR-102 ‘Gaïa’, a rendition of the brand’s debut model from 1997. Featuring a wandering hours display driven by a carousel-based module, the UR-102 introduced Urwerk’s whimsical, sci-fi-inspired horology to the world and set its founders Felix and Thomas Baumgartner, and Martin Frei, on the path to horological esteem. The ‘Gaïa’ version for Only Watch 2021 is named after Urwerk’s recent achievement of the ‘Gaïa’ Prize for Entrepreneurship, as the founders “dedicate this symbol of hope to all those who struggle to make things happen.” The watch itself is features the iconic UR-102 case with the famed wandering hours display, housed in a one-of-a-kind asphalt-coloured case in anodised aluminium with a platinum caseback hand-decorated with glittery blue lacquer.