"The whole MB&F adventure has only one goal - it's for me to be proud of myself the day before I pass away, whenever that is." 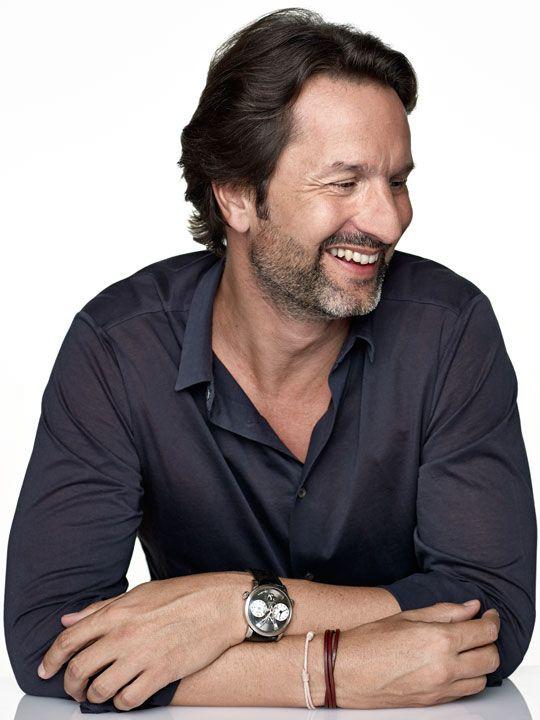 You could call 49-year-old Maximilian Büsser a dreamer. The head honcho of avant-garde watch manufacture MB&F isn’t interested in making timepieces. “Giving the time is not the point,” he declares. “Our machines are extremely precise with incredibly great regulation and amplitude — but that’s because we respect our forefathers, not because it’s a goal.”

What’s the goal then? “Each Horological Machine (HM) we design has to be a work of art,” Büsser explains. “We deconstruct traditional watchmaking, which is round and classic, then take it apart, disintegrate it and reconstruct it into a 3D machine, which is a work of art.” In an entirely apt analogy, Büsser describes what his company strives to do: “If you write a novel, the English must be perfect but the novel is the point, not the grammar. You see the difference? Watchmakers are always about the grammar. We’re about the novel.” 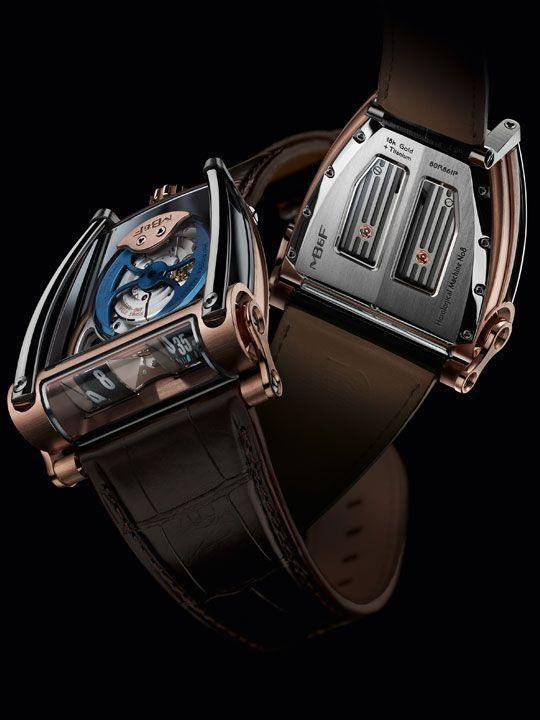 Perhaps that’s the reason the latest HM tells the story of his childhood. Named the HM8 (HM5 plus HM3, geddit?), the new machine fuses his early ambition to be a car designer and his love for a Japanese anime character, Grendizer. “I wanted to be a car designer from the age of four to the age of 18,” Büsser reveals, “and so the HM5 was inspired by the supercars of the 1970s—the back of the Lamborghini Miura.” Coincidentally, the HMX, launched for the 10th anniversary of MB&F last year, also takes inspiration from automobiles. Both these pieces feature a heads-up display system engineered and developed in-house, and costing millions of dollars. This same system is used in the HM8 (above), where the movement is flat but the time is displayed vertically through a sapphire crystal prism mirror. 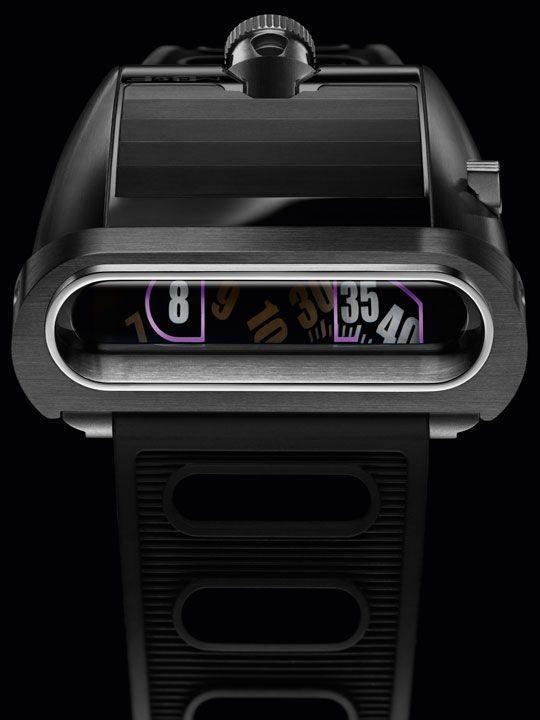 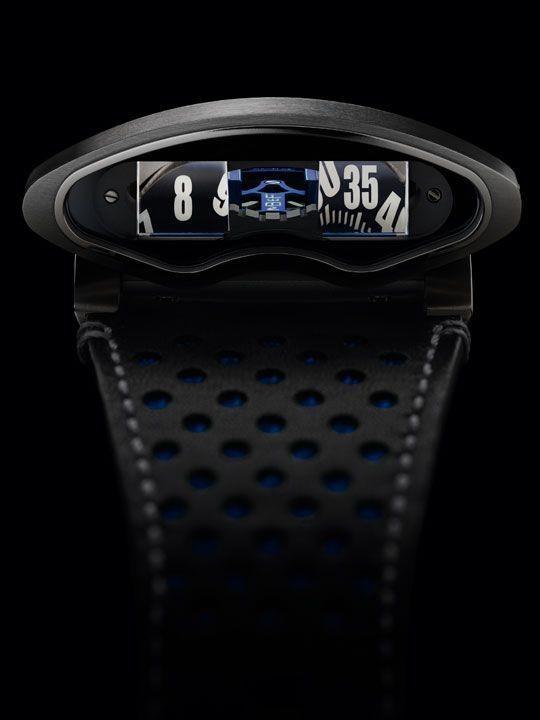 With the HM3, Büsser went back to the first transformer robot he saw on television at eight years old. “Grendizer was a Japanese anime transformer robot who would save the world and everyday I would go into my room and I was saving the world. I had a very, very tough childhood, saving the world,” he laughs. Grendizer’s battle-axe is the inspiration behind the rotor of the HM3—the first model to have a rotor on top that you could see winding your watch (below). 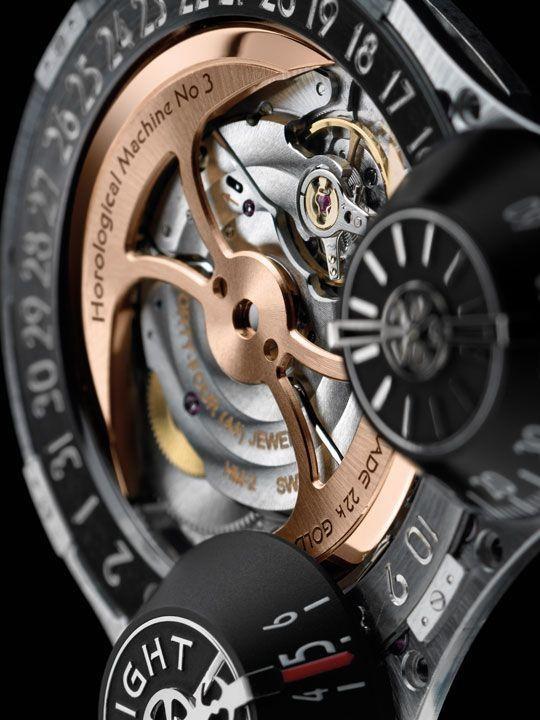 “There is a kinetic connection between you and your piece; that’s something I’ve always adored,” says Büsser. In the HM8, the battle-axe rotor sits just below an anti-reflective piece of sapphire crystal, which gives the wearer the feeling of being able to touch it. Check out the VIDEO here:

The HM8 is called Can-Am. Tell us about that.
Can-Am was a race car championship that started in 1966. This year marks its 50th anniversary and so we wanted to launch HM8 this year, to coincide with it. I wanted to reproduce part of Can-Am and the object I chose was the beautifully polished steel roll bars on the race cars back then. These insane drivers were driving at around 1,500 horsepower 50 years ago, risking their lives at every race and this was probably the only thing that would save them, so I wanted to use that.

Take us through the design.
The HM8 is probably the most sophisticated design I've ever done. You've got the titanium hand-polished roll bars - they're machined out of an ingot and it takes tens of hours to try and do that. In the cockpit you have the heads up display, the jumping hour and sweeping minutes. At the back, you've got the engine bay and on it you have a sapphire block, which is actually protecting the whole engine and you get the impression that you can actually touch it. Movable lugs offer optimal comfort and behind, as with a car, you've got the oil sump of the engine, which is actually used for lubrication of the engine at the back.

When you create a round watch, you don't have to think. Circle, four lugs, that's it. Here, you're creating a new language, a new design language. Every single curve has to speak to you, everything has to look right. And we have done over 50 prototypes to come to the final piece. In my language, at least, everything speaks to each other and it's just seamless.

How long did it take from concept to finished product?
Three years. The technology of the rotating rotor on top had already been developed with HM3 and the technology of the heads up display had already been developed over three years with HM5. So we're able to use that in our box of tools to get to this. This is really what MB&F is about. This is a mechanical sculpture. This is nothing to do with a watch anymore.

What was the challenge in designing this watch?
There's the engineering and there's the design. And the design is creating something that just works when you look at it from every angle. There's nothing that sticks out and doesn't seem balanced. So how do you make this product look beautiful from every angle? Over 50 prototypes. That's a lot, I can tell you. In my history, I've never done that. 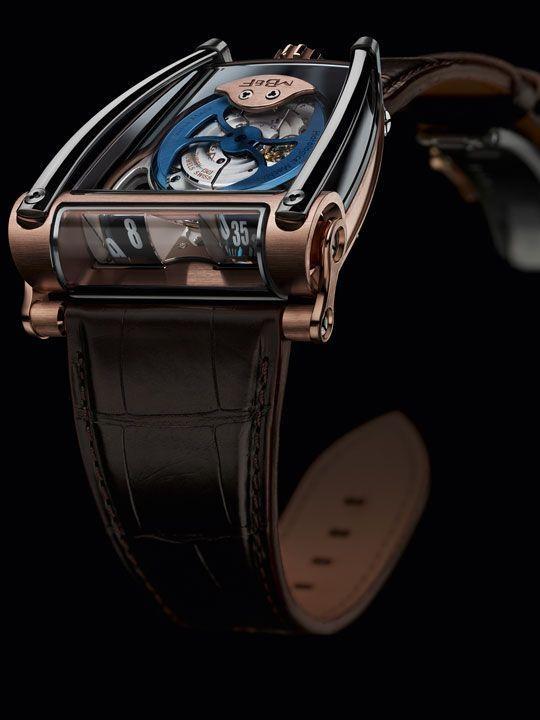 What is your thought process when you come up with new HMs?
My creative process is borderline scary. Originally when I created the brand, I was very much a doodler. That's how the HM1, 2, and 3 came about. Now, I get images. It's a bit like Christopher Walken in The Dead Zone. It often used to happen when I was on an airplane because that was the only place where I was completely in a bubble. You start imagining something and you start constructing it in your mind and then my challenge is to sketch it and then transfer that to the designer.

I remember (the idea for) a piece you will see in 3 years’ time, happen to me in Tokyo at 6am taking the bus back to the airport from the hotel. I'm completely jet-lagged, I've slept four hours, I'm half dozing off and boom, I suddenly imagine a piece which we've never done anything like. So I tried to recapture it and start seeing it in 3D. I can now manage to see my idea in 3D, and you try and hold it and sketch it and that's how the process starts. Scary huh?

How far do you work in advance?
We work about five years in advance. It takes me three to four years to work on a project from idea to delivery so if I don't know what's going to come out in four years, we're going to have a very tough year because there's going to be nothing coming out. We've got six to seven movements in the pipeline so there will be a few years where we'll see two of them.

The watch industry is not doing particularly well now but the demand for your watches is exceeding your supply. What are your thoughts?
I'm thinking of where I'm going to put the cursor on the politically correct answer. Yes, the industry is suffering. That's because of an enormous lack of real creativity over the last five to eight years. With growth having been the goal for virtually everyone, they forgot to create. When your goal is growth, you don't take creative risks. And so I've been wondering from the beginning of this year if it was a big risk for us, or whether it was a great opportunity. And I think the numbers are telling me it's a great opportunity.

We never, ever create a product because we think it will sell. There's a part of us that is very proud that we create products we think nobody's ever going to buy. We've also built up a community over the past 11 years of creative addicts like ourselves because the quality of the products we've delivered is impeccable. They expect us to amaze them. That is the number one thing our community expects from us.

How do you deal with the pressure of constantly surprising your customers?
When I started 10 years ago, nobody knew who we were and what I was trying to do. Now after 11 calibres, I know that I'll have MB&F owners going, "Mate, you better come up with something that's going to be amazing because that's why we love you." And amazingly enough, I actually don't have pressure because the whole MB&F adventure has only one goal - it's for me to be proud of myself the day before I pass away, whenever that is. I want to be able to look back and say, "You did well, you can go now." I will never be proud if my next product is pretty much like the one before.

You’re constantly working on new ideas but what do you do in your spare time?
I spend time with my family; that's why we moved to Dubai. My company and workshops are in Geneva and when my wife was pregnant four years ago, I said to her, "Where do you want to go live?" She looked at me like, "What are you talking about?" I said, "If I live next to the workshops, I'm never going to see our daughter grow up." Why? Because MB&F is an enormous part of my life. So five days a month I go back alone to Geneva and we go there as a family in the summer but my wife and daughter are based in Dubai. When you're 50 and you've got what I have, I don't want to have regrets when I die. I want to see my daughter grow up. It can't be by staying next to my workshops, that's impossible. I've been very, very biased towards my work. It's time I balanced that out.