“Everything man-made will fail.”

People outside of diving and ocean conservation communities would not have heard of Cassell, but he is a legend. The multi-hyphenate champion of marine preservation has been involved in a variety of causes, from hunting down poachers of near-extinct marine species, to leading his non-profit Under Voyager Project (UVP) that aims to educate the public and academics about the underwater environment.

And that’s just half of it. In his previous career, Cassell was in the Special Ops – he was a full-blooded military man whose tales of close shaves with death and destruction make you ashamed to ever want to watch a Jason Bourne flick again.

Even in his current life as a marine conservationist, Cassell is never far from danger. He has had his boat run over by poachers, with one even trying to murder him at close range, all because he was getting in the way by protecting the endangered species that they were hunting. “I’m small but I’m mean,” he says and laughs. “One tried to kill me with a rock, but I made him change his mind quickly.”

Cassell’s work then piqued the interest of Luminox, which started its collaboration with him in 2009. The watch brand, which is known for military-approved robustness (its timepieces are standard issues for the US Navy SEALs), has since issued several special editions bearing Cassell’s name, with a portion of proceeds from the watches’ sale going into funding his marine conservation efforts. Here, he shares his appreciation of Mother Nature and all life has to offer.

I've loved the ocean since young. I was good as a combat sniper, and combat dive skills were essential to what we do. At 15, I was already a scuba diver and an underwater welder - one of the youngest in the U.S. at that time.

Colombia’s the worst place for a swim. I was there for a military sniper mission and we got found out by the FARC. I had to swim all night in the river to get away from them. I bumped into things much bigger than myself. Didn't know what they were! Crocodiles, catfish, electric eels? I don't know!

Some types of fish are the new drug. There are certain species that are endangered and their prices have inflated so much that they are worth as much as cocaine. An example is the totoaba fish. They bladders are considered prized delicacies and drug cartels are hiring poachers to get them. Now they are almost extinct. 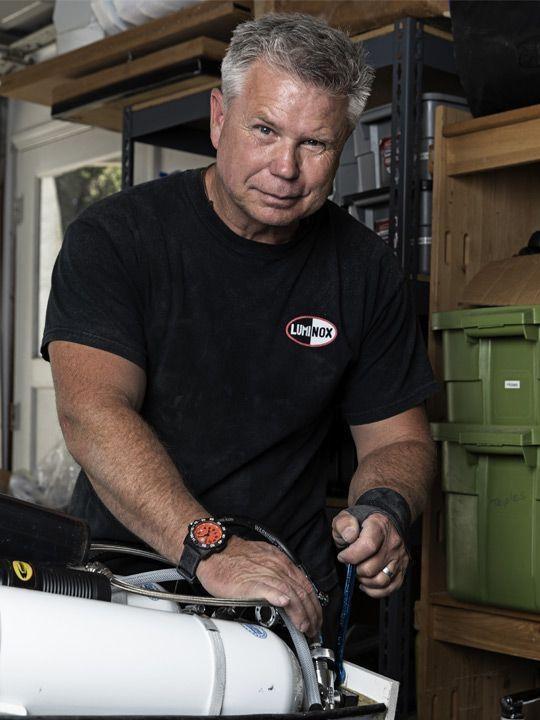 Life itself inspires me. On one mission, I remember finding a mass grave containing 126 women and children who were murdered by a drug cartel. But as the smell of death surrounded me, I also experienced life all around me in the jungle. The monkeys, the parrots, the bugs, everything - the life that still existed. It then felt to me that this was the most important thing; our Mother Earth that gives life. That it is bigger than all our problems.

Money talks. I had always been a diver and ocean exploration was my favourite thing in the world. But there wasn't money in it. There are lots of money to be made from destroying the ocean - over fishing and energy production and things like that. But there's little money to be made from saving it. There are not a lot of people you can name who get a salary from protecting the ocean.

I'm not doing anything special. When you see an animal struggle for its life, or one that's already dead and you imagine what it had to go through, you just feel like you gotta do more. Anyone who has an appreciation for life would want to do the same.

People doing tough things still need to wear watches. In my world, smartphones and smartwatches are useless things. I'm in the water, I'm in mud and muck, and you need a piece of equipment that is like a survival tool.

Everything man-made will fail. I always go to my missions prepared. I have two of everything - two life support systems on, two dive computers, two watches. I believe in having back-ups.