You can't help but stare at the good-looking pair. We mean the Longines watches, of course, but these guys aren't too bad either. 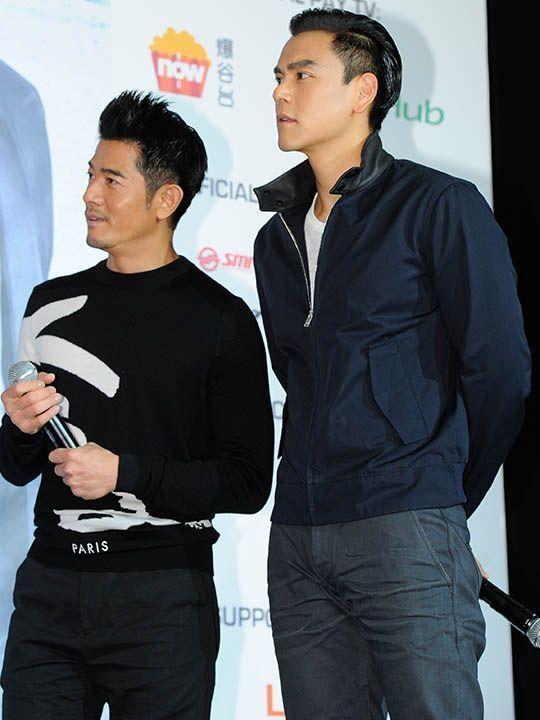 In town on July 5 with veteran actor Chow Yun Fat to plug their new Hong Kong police blockbuster, Cold War 2, Aaron Kwok and Eddie Peng sent fans into a delirium as they mingled in a meet-and-greet session at the Marina Bay Sands Skating Rink. As ambassadors of the brand, the pair was also presented with a Longines Column-Wheel Single Push-Piece Chronograph (below) each—a reissue of the iconic Longines Museum piece. 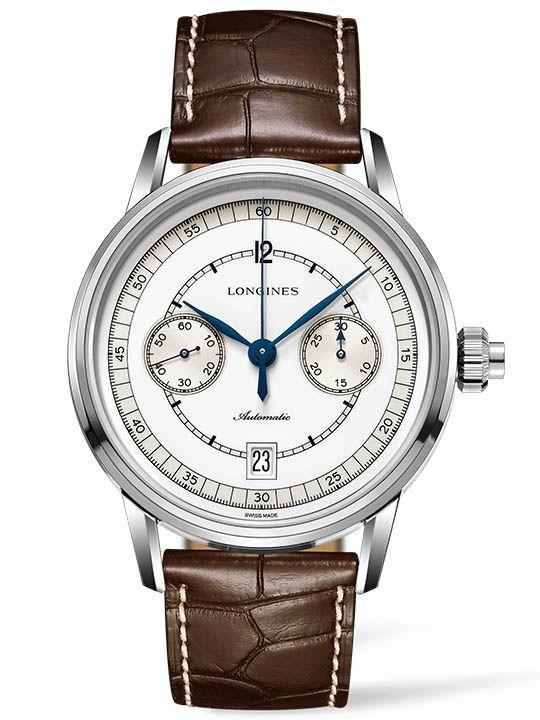 If you’re planning on watching the movie, keep an eye out for Aaron Kwok’s telegenic wrist candy, the Longines Heritage 1973 (below), driven by the Calibre L688, a self-winding mechanical column wheel chronograph with power reserve of 54 hours. Combining sporty and masculine aesthetics, the watch perfectly complements Kwok’s role as Acting Police Commissioner Sean Lau. Here, he tells us more about how he’s grown over time both as the character and as an actor. 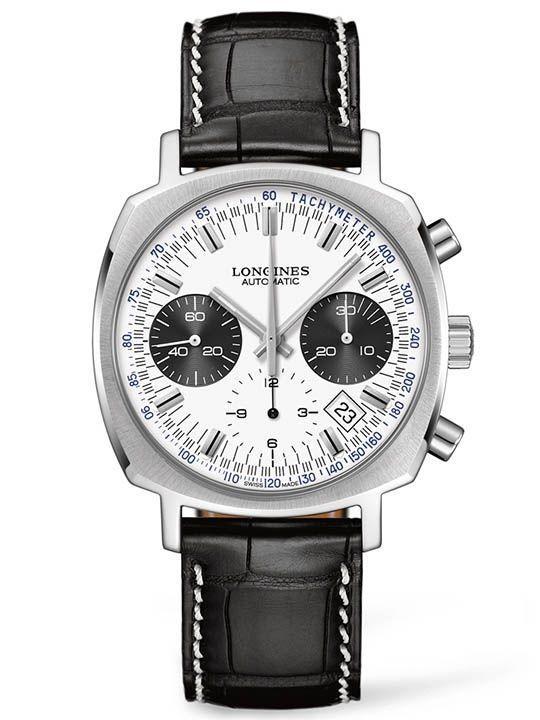 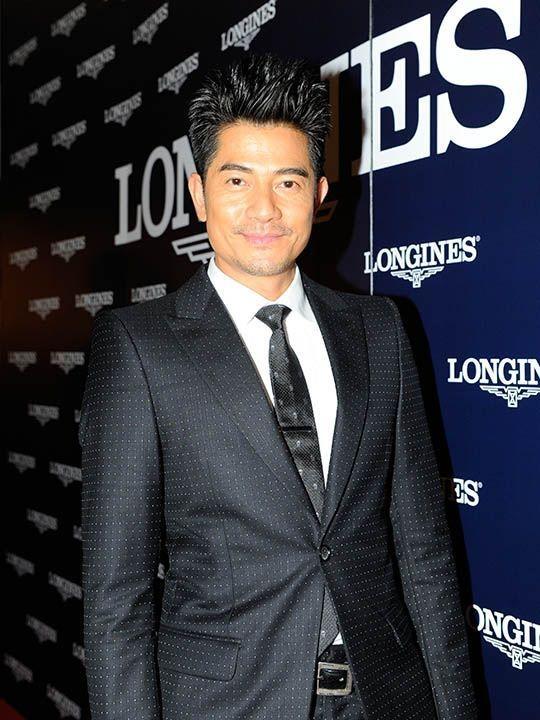 Is there pressure acting with some of the greats like Tony Leung and Chow Yun Fat?
I don’t think there’s much pressure. I really respect them but when I’m filming, I don’t see them, I see only the characters they play. So to me, there are different levels.

How has your acting evolved over time?
I’ve been looking for different roles to challenge myself. Although I’ve played a cop numerous times in my career, it’s difficult to play one who’s in a different position or designation. You have to bring out a different attitude in the way the character talks, presents himself and addresses the media. My character has become a very stable person and I’ve never played this sort of role before. I feel that reprising my role four years later, I’ve become more mature and persuasive in my acting, and the audience can see what a Commissioner of Police is really like. 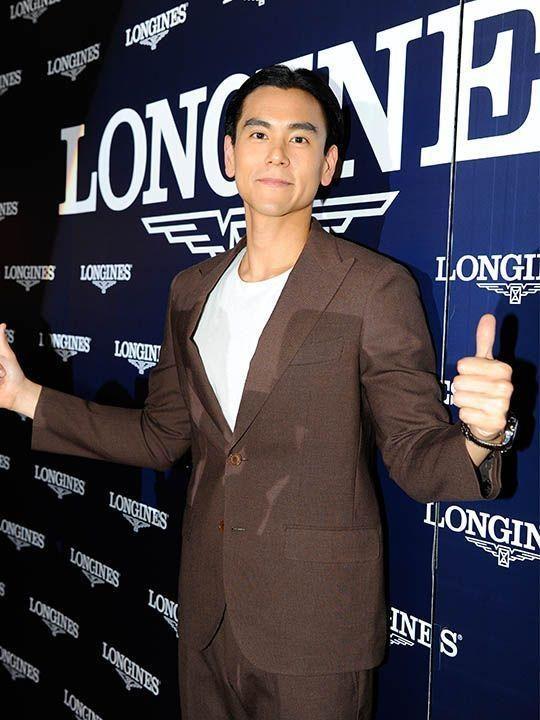 In his role as baddie Joe Lee, Eddie Peng regrets that he didn’t get to work with Chow Yun Fat but relished the opportunity to work with Tony Leung and Aaron Kwok. “It’s an honour to be here in Singapore with Aaron Kwok and Chow Yun Fat. I’m like everyone else, just here to take selfies with them,” he laughs. “I feel really lucky that at my age I have the opportunity to work with such great actors. After watching them, I feel that I’m still inexperienced and have a long way to go in this industry,” he reveals.

Tell us about your experience making Cold War 2.
I got a chance to shoot guns with real bullets in the tunnel in Hong Kong. The bad guy gets to blow up the subway so what more could you ask for right? I’m really happy I got to do a lot of action scenes that I didn’t do in the first movie.

What have you learnt from the veteran actors and how have they inspired you?
If you look at Aaron and Tony, they have been doing this for years and compared to them, I’m just the new guy. And speaking of Chow Yun Fat, one of the biggest names in entertainment, you can see how easygoing he is and how humble they all are. For me, at my age, there’s a long learning journey ahead. I’m not worried about being like them, I just want to enjoy the moment and be a “now” person. I don’t really think about what’s going to happen in 20 years. That’s too long, that’s not my plan. My plan is to enjoy the now.

Did the success of the first film put added pressure on you since you did so well?
Usually movie sequels bomb, but I watched Cold War 2 and it’s totally better than the first one, I can tell you that. So I think the pressure has been softened by that. For me, it’s a character that I revisit and a lot of great actors have joined Cold War 2. I think the only pressure is that I have to be seen with great actors like Chow Yun Fat, Tony, Aaron and Charlie Young. You don’t want to be invisible in the movie right? So I try to do a lot of homework to let people recognise me so that hopefully, four years later in Cold War 3, you guys can still see me and I can come to Singapore again (laughs).

Chow Yun Fat has proved to be the “Selfie King”. What about you?
I do take selfies with fans but it depends on whether they really are my fans. Sometimes people just bump into you in the elevator or in the washroom and they want to take a selfie and I think maybe that’s not the right place (laughs). But I’m really easy and happy to be myself. If I’m walking along the streets and I see my fans, I’ll take a photo with them as long as they don’t hurt me, but I don’t think they will.

Do you think you’re at the peak of your career?
I don’t think I’ve nearly reached my peak yet and I hope I can take on more memorable roles and more movies where I can work with great directors and really open my eyes to different worlds. I think in the future I hope to be more easygoing and relaxed in handling each new project. I hope I can continue acting for the next 10, 20, 30 years. Or maybe then you guys won’t want me to act anymore (laughs).

Longines is the official watch of Cold War 2 which opens in cinemas on July 8.

More in this category: Off To The Races: Longines Singapore Gold Cup 2015 Watch Of The Day: Longines Lindberg Hour Angle 90th Anniversary
back to top