If anyone can paint a picture of nature through a timepiece, it’s Jaquet Droz. The 279-year-old Swiss watchmaker specialises in making automatons for wristwatches that create some of the most evocative pastoral scenes ever. Not only is the art of automaton-making an incredibly complex one, Jaquet Droz’s timepieces also include meticulously hand-engraved and enamelled works of art, all coming together to tell the time poetically, set against stunning landscapes.

This month, the brand unveils an addition to their Bird Repeater family—the Tropical Bird Repeater, limited to eight pieces. Set against a tropical oasis of greens, purples and blues, the watch is truly a sight to behold.

Attaching the wing of the hummingbird.

On the left, a waterfall cascades realistically while a trio of dragonflies flutters alongside, their Super-LumiNova wings offering a mystical glow in the dark. Next to them, vermillion birds of paradise beckon a hand-carved, hand-engraved hummingbird, whose wings beat up to 40 times a second—faster than the human eye can even observe, and a unique animation in watchmaking history.

Get the latest watch reviews and comparisons straight to your inbox!

To the right, a toucan peeks out from amidst palm fronds and opens its beak, as a peacock unfurls its plume of feathers at five o’clock. In total, seven different animations exceeding 12 seconds make up four different scenes in a single dial. Spectacular? We certainly think so. But that’s not all. 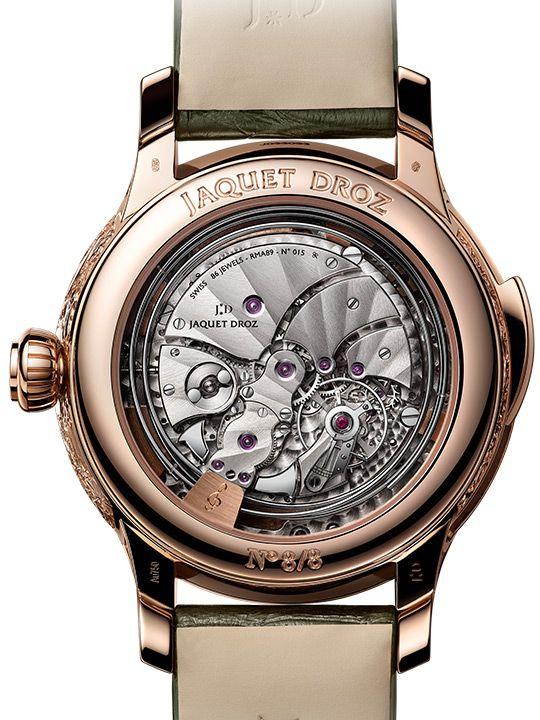 As its name suggests, the watch is also a minute repeater. Powered by the new in-house Calibre RMA89 seen through the caseback (above), the complication gets an almost-silent wheel regulator, new rack springs, and a longer pause between the quarter hours and minutes. In addition, the quarter hours are struck at a major third (that’s the ‘mi’ in ‘do re mi’) and power reserve now stands at 60 hours—all part of the movement’s innovations.

Equally fascinating as the grand complication are the intricate crafts that accompany the watch. From engraving to miniature painting, the watch is adorned with the handiwork of craftsmen from Jaquet Droz’s Ateliers d’Art. Aside from the meticulously detailed work on the dial, the red gold case is carefully hand-engraved with an animal motif on the caseband and sides of the lugs.

Just when we thought it couldn’t get any better after the stunning Loving Butterfly timepiece from Baselworld this year, Jaquet Droz flexed its creative muscles again, reminding us that in the field of automatons, it really is king. But the bar has been set pretty high this time and we’re already in anticipation of what the brand will come up with next.

Get the latest watch reviews and comparisons straight to your inbox!

What Is A Grande Sonnerie?