When it comes to horological livery, Jaquet Droz is king. 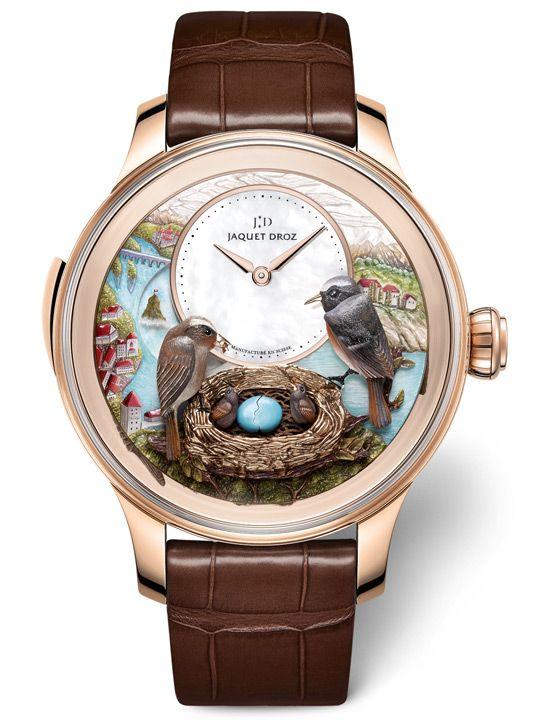 Once in a while, a watch comes along that brims with so much artisanship, even its amazing technical intricacies seem imbued with a sense of poetry. That was certainly the case with the Jaquet Droz Bird Repeater Fall of the Rhine timepiece, which had us watch scribes ooh-ing and aah-ing over its beautiful enamelled dial and realistic automata.

Introduced in 2012, the Bird Repeater is a tribute to founder Jaquet Droz’s love for his country’s stunning landscapes. From Geneva Lake to the Swiss alpine slopes, and now the Rhine Falls, enchanting scenescapes are captured in mesmerising detail by master artisans.

Harnessing the skills of Jaquet Droz’s finest in the Atelier d’Arts department, the Bird Repeater’s mother-of-pearl dial is hand-painted to intricately replicate the grandeur of the cascading Rhine Falls and its surrounding areas. In a show of great dexterity, the artists hand-engraved two 18K gold redstart birds along with a complex nest, which houses two hatchlings and a blue enamelled egg that hatches when the automaton is triggered.

And if there’s one thing Jaquet Droz is known for, it’s the brand’s expertise in automata. Back in the 18th century, founder Pierre Jaquet Droz built automata like the famous Writer, Draughtsman and Musician (all housed in Neuchâtel’s Art and History Museum), in a bid to impress rich nobles into buying his equally exquisite mechanical timepieces.

Although the watches were of a more conventional nature, they, too, brimmed with effervescence; sheathed in fastidious engravings with vivid enamel hues and miniature paintings drawn using brushes that were no thicker than a strand of hair. These artists even had to practice breath control so that their strokes were steady and precise (much like how soldiers use breathing techniques while firing their rifles).

When the automaton in the Bird Repeater is activated, a plume of feathers unfolds from one of the redstarts (the mechanism is seen above) while the other bends down to feed the hungry chicks, as the egg cracks open to reveal another little chick inside. In total, there are no fewer than eight different animations that bring the watch to life.

As its name suggests, the Bird Repeater also has a minute repeater function which allows the hour to be chimed when the slider is pushed. The best way to experience the watch is to activate the minute repeater at 12:59. That is when the repeater mechanism sounds out its full range of chimes, and the automata performs its entire animation sequence.

Driven by the manual-winding Calibre RMA88 with 48-hour power reserve, the watch comes in a limited edition of just eight pieces worldwide with just one available in Singapore. And in case you’re wondering, yes, it’s numbered ‘8’.