Whether you like it cerulean, royal or navy, there’s a blue beauty with your name on it this year.

When it comes to colour co-ordination, it looks like everyone got the memo. From Audemars Piguet to Omega, this year’s watch dials are decked out in gorgeous shades of blue. Here are some we think stole the show. 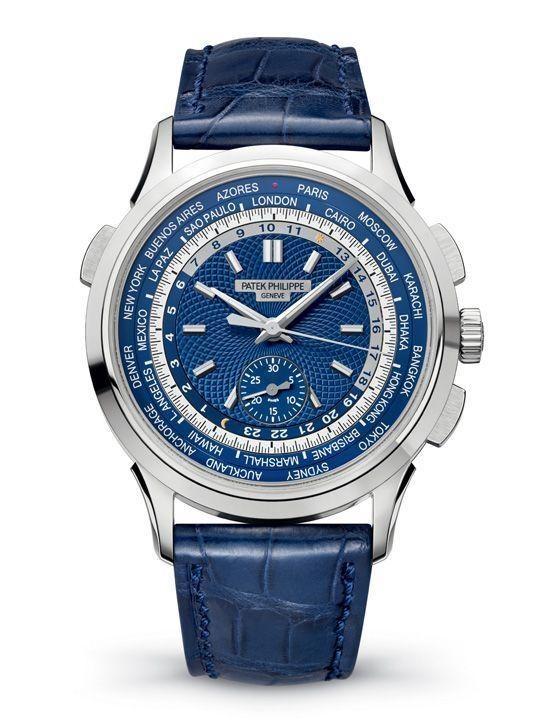 Prior to the launch of this timepiece, there was only one Patek Philippe World Time Chronograph ever made, the Ref. 862 442. The unique piece was created over 70 years ago and, according to the manufacture, probably belonged to a physician. Obviously, doctors got paid well even back then. This year, the introduction of the Ref. 5930 comes as a new member to Patek Philippe’s regular collection. The World Time Chronograph has a moving disc etched with 24 city names, each representing a different time zone, and a moving 24-hour ring which indicates the time of the city directly above it. This means you’ll probably never miss an overseas conference call again. 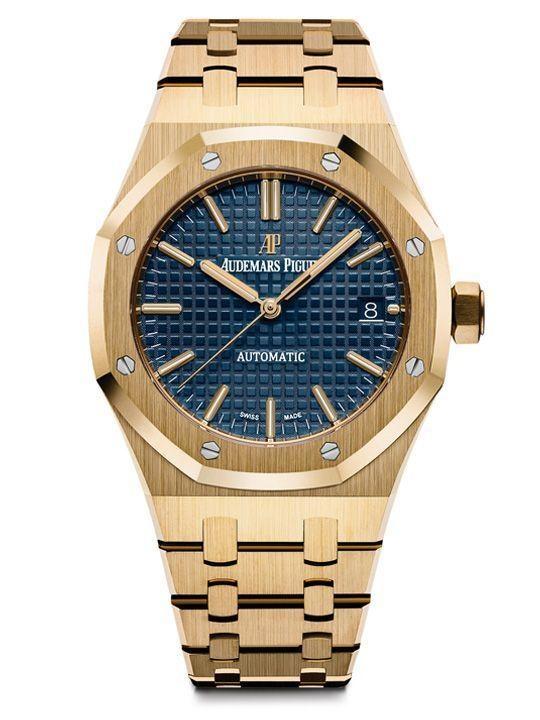 Choosing to debut an entire line of Royal Oaks in yellow gold this year was an astute move by the manufacture, not least because of its striking hue but also because it pays tribute to the original Royal Oak prototype which was made in gold. (Although it eventually gained prominence as a luxury stainless steel watch.) The entire collection comprises a perpetual calendar, chronograph, self-winding and quartz models in either blue or white dials. The self-winding version pictured here features the Calibre 3120 and comes with a minimum guaranteed power reserve of 60 hours. 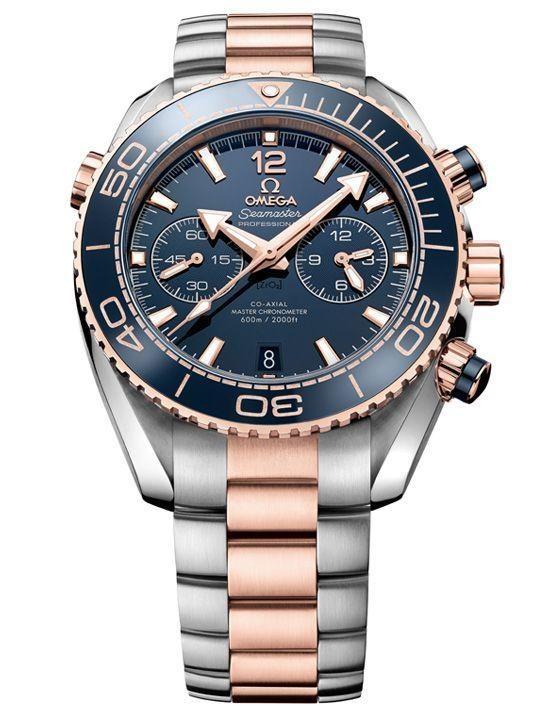 The big news for Omega this year is its continued overhaul of mechanical engines, with revamped models christened 'Master Chronometers', after getting fitted with the ultra-high-performance and anti-magnetic METAS-certfied Master Co-Axial movements. While inner beauty counts, we are equally besotted with some of the watches' external makeovers, such as this Planet Ocean timepiece in 18K Sedna gold and steel case with a blue polished ceramic dial. This chronograph features a bi-colour bracelet in stainless steel and 18K Sedna gold while the stately blue dial displays a 60-minute totaliser at nine o’clock and a 12-hour totaliser at three o’clock, with an unobtrusive date window at six o’clock. Check out our review of the full Seamaster collection here. 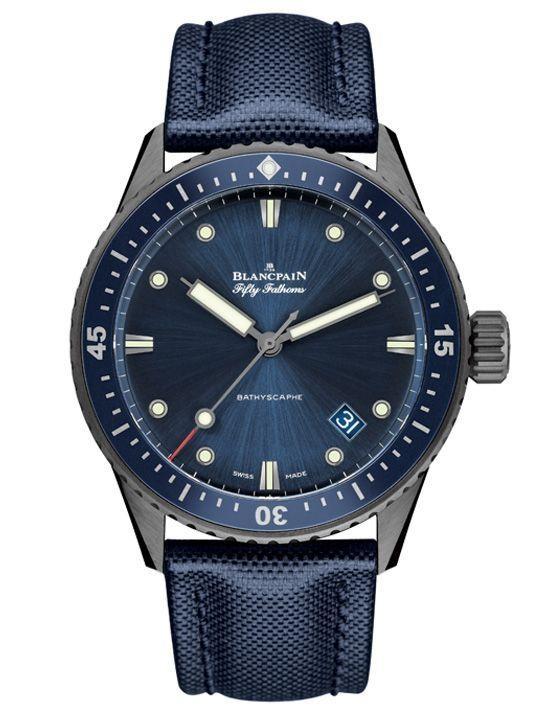 For the first time, the latest version of this timepiece sees a plasma grey ceramic case, previously used in the Bathyscaphe Chronographe Flyback Ocean Commitment launched in 2014. The material offers a slight metallic sheen and is paired with a uni-directional bezel featuring a blue ceramic insert with Liquidmetal hour-markers. A five-day power reserve means you can take this ticker on your next weekend dive trip with the guarantee of a constant energy supply.

Driven by the manual-winding Calibre 58-01, this timepiece features a second-stop mechanism where the time display pauses and the seconds hand is reset to zero when the crown is pulled out. At the same time, the minute hand jumps to the next full minute, and continues to do so when the crown is turned to set the time, thereby preserving the correct time ratio between minutes and seconds. Why do we need this? Well, we don't. It's just Glashütte Original's way off flexing its mechanical muscle. A navy Louisiana Alligator leather strap completes the look. Following a five-year development process, the manufacture’s new automatic chronograph Calibre 5200 is unveiled in their latest chronograph model from their iconic Overseas collection, which has been revamped this year. Compared to its predecessors, the refurbished version sports a more contemporary look with softer angles and contrast polishing for a casual-luxe disposition. Meantime, the in-house automatic chronograph movement, which comes with Geneva Seal certification, is equipped with a vertical coupling clutch for more precise interval measurements, as well as a soft iron ring that protects it from magnetic fields. 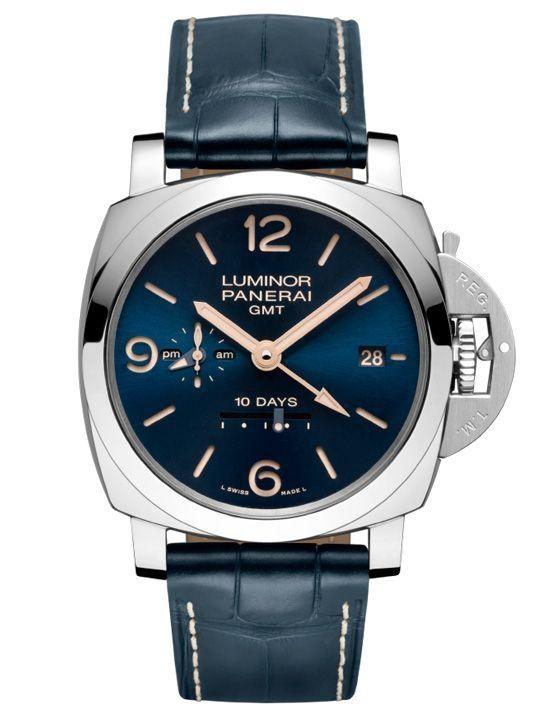 Why settle for one when you can have four? At least that’s what Panerai is offering with its latest blue dials collection, inspired by the relationship between light and sea. The stunning dials are bathed in an intense blue with a satine soleil finish that catches the light and diffuses it in a way that creates a sparkle reminiscent of the sun’s rays reflecting off the ocean. The new Luminor 195010 days GMT Automatic comes with the automatic calibre P.2003 , a GMT function with am/pm indication, seconds reset and a power reserve of at least 10 days.