How to get your demure game on, even if you’re really not.

In the late 19th century, it was deemed unnecessary for women to know the time or even check it (cue angry mobs of women up in arms). As a result, they had to wear watches disguised as a piece of jewellery. It’s a guess but perhaps this is how the term, ‘fashionably late’ evolved?

These days, secret watches have come to the forefront as accessories to be flaunted and enjoyed. Here are some pieces that play their double duty role perfectly. 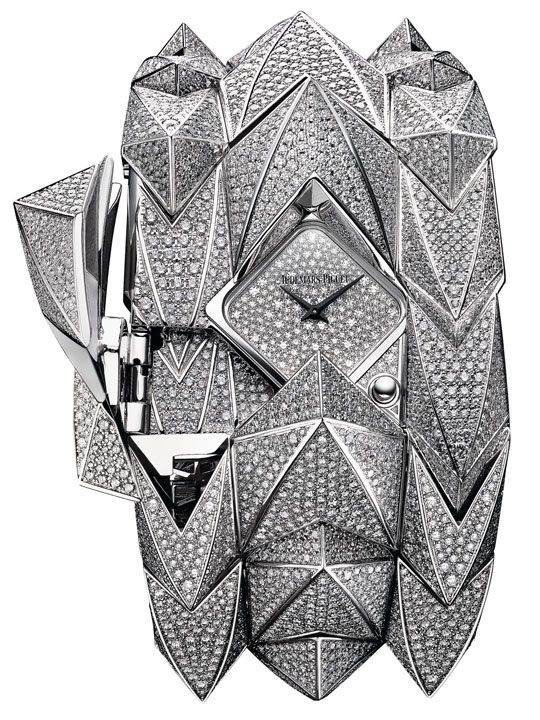 Multi-faceted and fully paved with diamonds or interspersed with black onyx, the Diamond Fury follows last year’s Diamond Punk. This year, the cuff is heavier and features jagged edges that are slightly more elevated, giving it a decidedly stronger look. There’s also a spring mechanism that reveals the dial at the push of a button, as opposed to the Punk’s sliding window. Ironically, the Fury looks more punk than last year’s version but one thing’s for certain—it’s hard to ignore. We could totally see it on Joan Jett’s wrist.

With let-them-eat-cake Marie Antoinette as a patron, you would have expected Breguet to have an array of secret watches dripping with jewels. Surprisingly, they didn’t actually make secret watches until 2013. CEO Marc A. Hayek explains Breguet is a watchmaker first and foremost, and not a jewellery house. “Yet our philosophy is to design creations that are in line with our identity, history and expertise, while meeting today’s expectations,” he says. With Breguet’s Secret de la Reine watches, the brand returned to familiar territory by employing the art of cameos, as it did with the Reine de Naples Cammea. Crowning the dial is a cameo rose from the famous Elisabeth Vigée-Le Brun portrait, ‘Marie-Antoinette à la rose’, carved by Breguet’s own master engraver, Fabio Ottaviano. Swivel it to the side to reveal a dazzling diamond-paved dial. 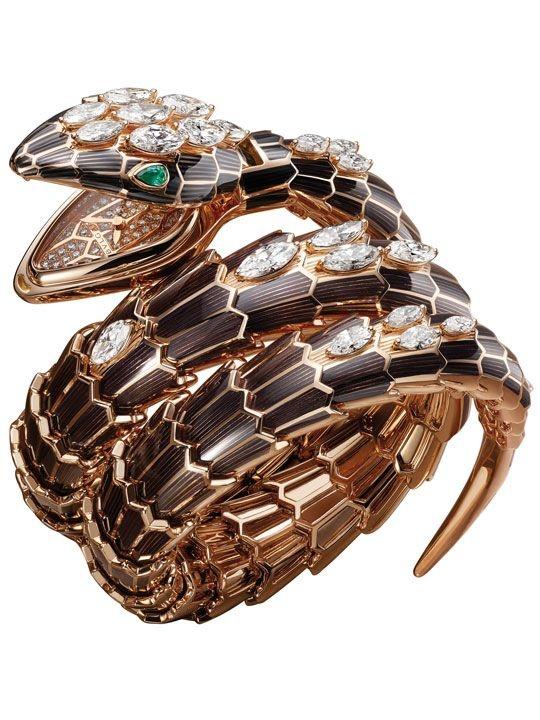 The late Elizabeth Taylor loved her Bulgari Tubogas, a series first introduced in the 1930s. In fact, she had to be careful to remove her gold and diamond-paved version when filming the movie, Cleopatra, mostly because the Egyptian queen lived in an era where the sun was still the primary arbiter of time.

Like the Tubogas, the Serpenti references the snake and winds around the wrist in an elegant fashion. This year’s limited edition Serpenti comes in two versions featuring a pink gold double wraparound bracelet, one enhanced with black lacquer and the other in an emerald green. Diamonds and emerald or ruby eyes accentuate the pieces. Sensually coiled around the wrist, the head flicks open to reveal the time in a gorgeous combination of haute jewellery and horology. 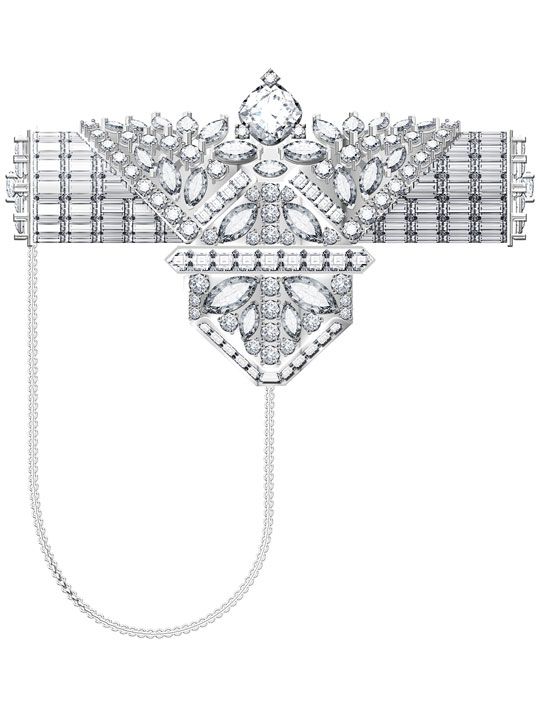 Not all secret watches are designed to be worn on the wrist. Case in point: this Harry Winston piece. The showstopper uses a staggering 368 diamonds of approximately 12.4 carats to create a stunning brooch with a T-bar chain inspired by men’s pocket watches. At the heart of the brooch is an 18K white gold octagonal dial encrusted with 142 brilliant-cut diamonds, revealed only with the push of a marquise diamond beneath the brooch’s largest stone—a 1.02K cushion-cut diamond. 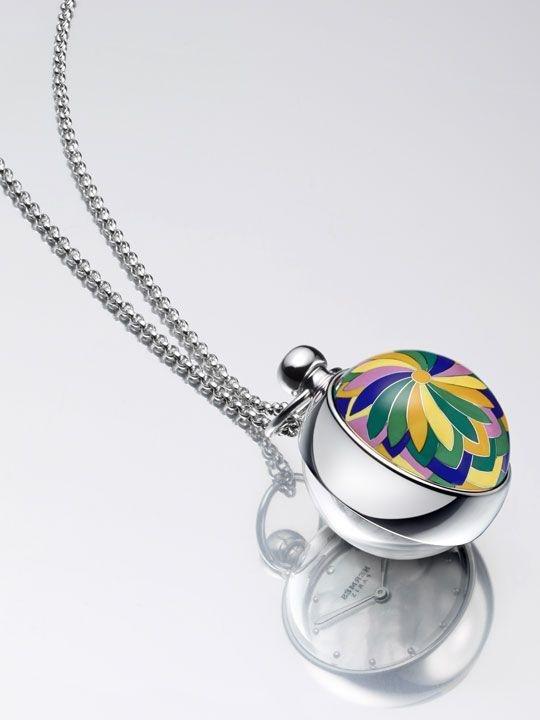 Like the Harry Winston piece, this Hermès watch isn’t what you would call ‘wrist candy’. But the idea of a necklace watch is not actually new—people were wearing chunky necklace watches way back in the 14th century, before Kanye and friends even hopped on the bandwagon. But more importantly, before pocket watches were even invented. While those were huge, Hermes’ rendition is petite and spherical, decorated with cloisonné enamelling. In a departure from most secret watches, the Pendentif Boule is devoid of diamonds and gemstones, although it features a mother-of-pearl dial, seen through a transparent crystal behind the enamelled half. 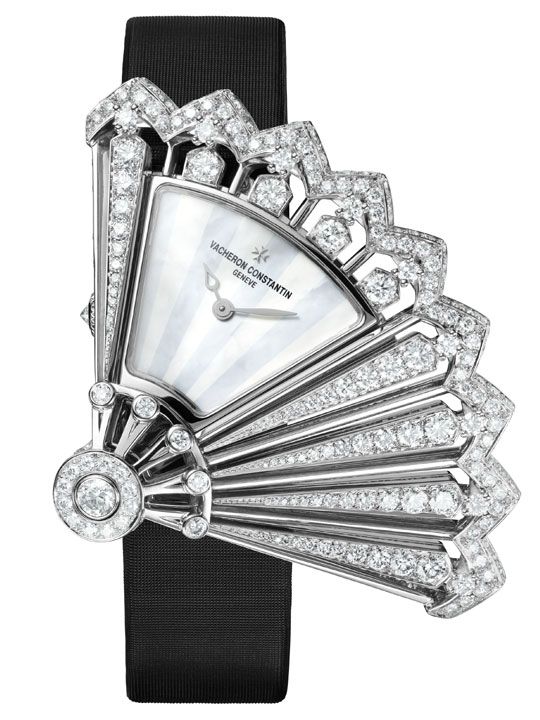 Designed in classic Art Deco style, reminiscent of the flapper dresses and Charleston steps of the Roaring Twenties, the Heure Discrète comes from a time just before the heyday of secret watches. 286 diamonds line up in the shape of a fan, a highly-prized accessory in the 20s, which swivels coyly to reveal a mother-of-pearl dial perfectly offset by an exquisite black satin strap. Very Great Gatsby-ish.