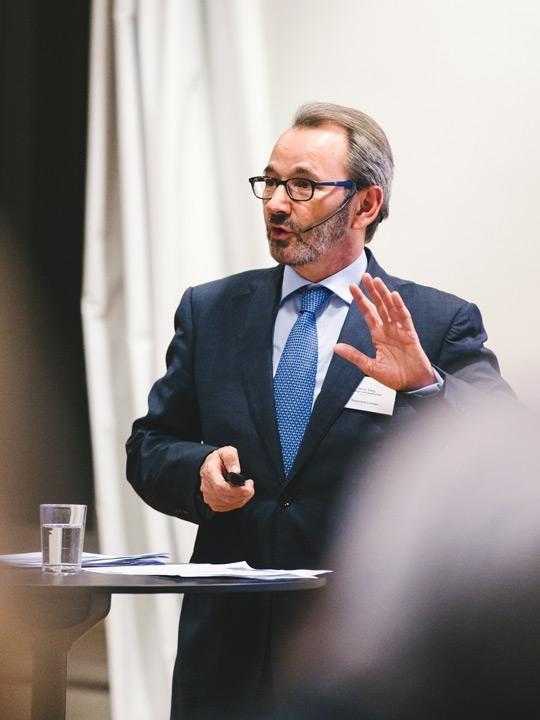 Raymond Loretan exudes confidence. But that’s to be expected from an experienced diplomat. Loretan's impressive résumé starts with an internship at the UN in New York and The Hague, and includes an illustrious tenure at the Federal Department of Foreign Affairs. He was also Swiss ambassador to Singapore and Brunei from 1997 to 2003, then Swiss Consul General in New York till 2007. And to cement his diplomatic credentials, he is currently president of the Diplomatic Club of Geneva.

But apart from being a diplomat, Loretan is also a man of many talents in different fields. From 1993 to 1997, he was secretary general of the Swiss Christian Democratic People’s Party and from 2012 to 2015, headed the Swiss Broadcasting Corporation. Last year, he stepped up to head the board of the Swiss financial daily, AGEFI.

As the new president of the Grand Prix d’Horlogerie de Genève (GPHG), Loretan brings with him a wealth of knowledge and expertise in various industries. He shares his vision for GPHG and what he thinks of the watch market in Singapore.

With so many changes in the major watch fairs, do you think the landscape of horology is changing?
Perhaps, but I’m not sure how these watch fairs are going to evolve. What I know is that the marketing approach of the industry is changing and most of the brands are thinking of new marketing strategies. Maybe all these watch exhibitions are not a priority anymore. I’m not speaking on behalf of Baselworld and the other fairs, but maybe they have to be more creative to maintain their position.

Our model is good, but we can’t compare it with an exhibition because we are an (awards-based institution) and we have no commercial dimension at all. We work in the interest of the watch industry as a whole, and the best way to promote it is to have this competition and this prize. Our task is not only to educate, it is also to persuade the brands that in participating, they contribute also to the promotion of the watch industry as a whole. This is also in their own interest.

Do you have plans to evolve the GPHG?
We might change the model somewhat. Perhaps with a larger selection process, creating kind of an academy, like the Oscars, with 200 to 300 people selecting the first round of watches. It's quite complicated actually, so we're still thinking about it because you could have a mix in the jury of watchmakers, brands, collectors, clients, journalists. We could also enlarge it geographically. But we still need a smaller jury for the final selection because it would be impossible with 300 people.

These plans are not yet mature, of course. We have to concentrate now on the 18th edition because we are going to have the ceremony in November and then we make a trip to Vienna with the winners, and then we're going to start again. In 2020, we have the 20th anniversary of the awards, so it would be nice to give a new dimension to the Grand Prix. We are thinking actively about this.

You introduced the new ‘Challenge’ category this year, open to watches under 400 Swiss francs. Will you continue to create new categories in future?
I think this is being evaluated all the time. This year we created a new category plus a new prize - the Audacity - to reward watchmakers who dared to do something special, who developed a vision that's perhaps not primarily commercial but which shows the trend. But we'll see because it's up to the jury to decide which one they want.

And I think that's one of our strengths - we're flexible. We can decide and review every year what we keep or don't keep. And since I've been in one or two of these meetings, I can tell you it's a hot discussion. It's really fascinating how people debate and at the end, you have to find a consensus. I give my opinion but the Director, Carine Maillard, plays an important mediation role. I am here to observe and sometimes I give my opinion but I think it's extremely important that everything is managed in a neutral way. I wouldn't like to give the impression of trying to manipulate anything. At the end of the day, it should be in the hands of the watch players.

With Michael Tay, group managing director of The Hour Glass

How has the watch industry in Singapore changed since you were last here as ambassador?
I think it has intensified. In my time, when you walked through Orchard Road, you didn't have so many brands and exclusive boutiques as you do now. And Singapore is not only for Singaporeans, it is also a platform for all of Southeast Asia, and a very important one at that.

What's also nice to see is that young people are interested. I saw at the opening of an event we had here that the crowd was made up not just of old, rich collectors but rather, young collectors. It's nice to see that. You feel also that beyond the object, there really is a passion for the watch industry and its values like creativity, tradition and technology.

The young people in Singapore are very interested to know more. There is a watch club in the Singapore Management University and also a Singapore Watch Club. So from my point of view, Singapore is still an important, mature, but not declining market. Here in Singapore, there is still a nice future for the watch industry.

What’s the most challenging part of your job?
The most challenging part for me is the transformation. We have ideas, how we can do it, and if we succeed, it's great. But then we need finance, because without it you cannot continue the prize. It's very tough because we are not-for-profit and we cannot get any money from the watch brands because we have to be independent. So this permanent search for financial partners is where I can help. But there are no miracles because everybody is looking for money and I'm in all these different organisations where we all look for money. But I think we can build a financial system which will be a little more effective and sustainable.

The prize ceremony for GPHG 2018 will be held on 9 November in Geneva.