FIRST, A QUICK RECAP
As mentioned, the Seamaster celebrates its 70th anniversary this year. Although this collection comprises several sub-collections such as the anti-magnetic Railmaster, its calling card has always been its dive watches – the undersea counterparts to the space- and motorsports-focused Speedmaster. 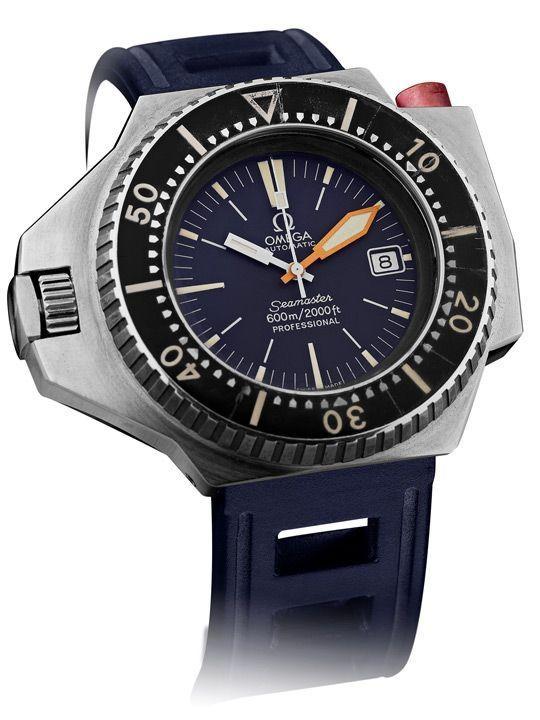 Omega’s archive in the dive watch category alone is a treasure trove, with ‘core’ dive watch models being supplemented with variants over the years. On the technical front, there are timepieces like the Ploprof (pictured above), first introduced in 1970 as a helium-proof, deep-diving technical specialist boasting a 600-metre water resistance. Design-centric creations, on the other hand, included the ‘Polaris’ from 1982, which had an unconventional case and bracelet design based on a Gérald Genta prototype.

WHERE DO WE START?
Incidentally, the Seamaster was Omega’s first product ‘family’, and heralded the brand’s transition from using reference numbers for its watches, to segregating them into distinct collections. Marking the 70th anniversary milestone is no mean feat. Omega has eschewed the typical approach of condensing and distilling the collection’s 70-year history into a single commemorative watch. Instead, the brand has introduced two bookends to this story that continues to be written today.

RIGHT FROM THE BEGINNING THEN?
The first set of watches, the Seamaster 1948 Limited Edition, marks the inception of the collection 70 years ago, and is based on two original timepieces from 1948.

The original Seamasters from 1948 were civilian versions of military watches that Omega produced for the UK military. Those watches used a simple, function-driven design language with a premium on legibility. The timepieces also came with improved water resistance, thanks to the introduction of the O-ring gasket in lieu of previous seal designs and materials.

This year’s new references are largely faithful recreations. They have, however, been enhanced functionally with Omega’s amagnetic movements, Calibres 8804 and 8806, while the complete watches are also Master Chronometer-certified.

The largest difference lay in the dial layouts, which is immediately apparent. In addition, the Central Second model has a slight technical slant with dauphine hour and minute hands inlaid with Super-Luminova, while the Small Second model looks more classical with leaf-shaped hands and a railway track chapter ring.

AND THE DIVE WATCHES?
Of course, there are commemorative dive models! Check out the revamped Seamaster Diver 300M line, which marks the latest chapter in the constantly evolving collection.

The revamped Seamaster Diver 300M line is fully fledged, featuring a larger 42mm case with 14 references with various materials and colourways. Like the Seamaster 1948 Limited Edition, the watches are equipped with Omega’s latest movement, specifically the amagnetic Calibre 8800. The complete watch is also a METAS-certified Master Chronometer that has run the gauntlet with a suite of tests including those for water resistance, isochronism, and positional accuracy.

Movement aside, Omega also shows off its watchmaking expertise in material experimentation. The bezel, for one, is now in ceramic, with markings rendered in either Ceragold (Omega’s proprietary combination of 18K gold and ceramic) or white enamel.

The dial mirrors this by also being ceramic, and comes fresh with a reintroduction of the Seamaster Professional 300M’s wave motif, this time created via laser engraving.

The feather in the cap here is the Seamaster Diver 300M Titanium Tantalum Limited Edition (pictured below) that celebrates the line’s 25th anniversary and is limited to 2,500 pieces. Design-wise, the commemorative watch is identical to the regular models.

In lieu of steel and gold, however, it is largely produced in titanium, with tantalum used in the bezel’s base and bracelet’s middle link, and Omega’s exclusive Sedna gold serving as accents in components such as the crown and helium escape valve.

Clearly, as the culmination of all the developments within the Seamaster family, the Seamaster Diver 300M is the most forward line yet. With Omega’s continuous efforts to improve both the aesthetics and technical capabilities of its watches, the best is definitely yet to be.