“Timepieces are such a great blend of art, science and engineering.”

The tanned, petite mechanical engineer (who also happens to be an avid runner) may not fit your average profile of a watch collector (if there’s even such a thing), but this girl knows her watches.

Influenced by her boyfriend, Tan’s interest in watches grew when she started reading up on timepieces and visiting boutiques. The turning point was a visit to the Cartier Time Art exhibition, held at the ArtScience Museum in 2011. “I can’t remember the exact displays now but I recall the feeling of awe,” she explains. “Timepieces are such a great blend of art, science and engineering. And as an engineer, I know firsthand the skills and patience it takes to design and manufacture those timepieces.”

Fast-forward seven years and Tan now has an enviable collection running the gamut from Audemars Piguet to Grand Seiko, along with unconventional picks from Ulysse Nardin and Gerald Genta. “Most of my watches are secondhand, simply because they’re cheaper,” she admits.

Tan is also very clear on what she likes in a watch. “It’s a close fight between the movement and the dial,” she reveals. “Movements were obviously what caught my attention in the beginning—complications like repeaters, automatons and tourbillons are such engineering marvels.” However, she also discovered an attraction to simple watches with interesting dials “probably due to affordability issues”. “Dials are difficult to make, and when materials go that thin, there is a high tendency to warp, or even crack, when you expose them to high heat.” Spoken like an engineer who knows her physics.

When I tried it on at the boutique, I found the size and design to be really great. As mentioned earlier, I was also very taken by the Cartier exhibition I attended and felt the Santos 100 would be a very good entry piece to own. Being my first watch, I was very cautious with getting it secondhand so I insisted on the watch having box and papers. This one I found was in pretty mint condition and the seller was letting it go because he bought it for his wife but she didn’t like it, so he decided to sell it to buy something else. I thought the wife was silly! I wanted the watch so much I even took leave to meet the seller! 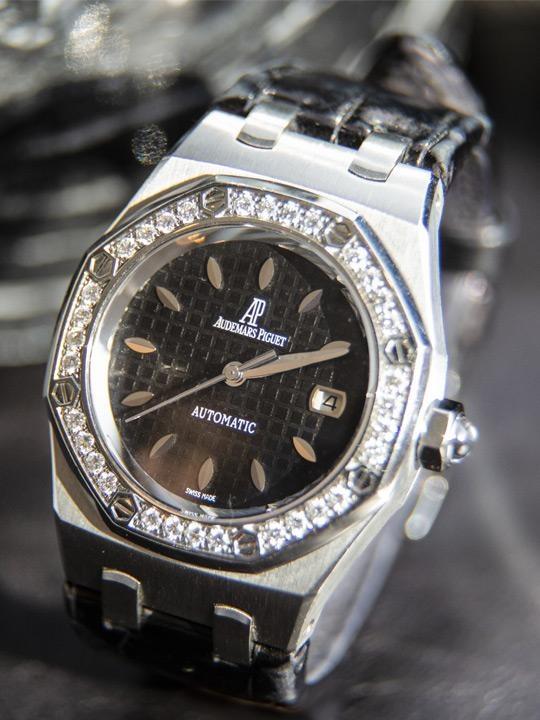 This is the mechanical version, which has since been discontinued. At first, when I asked the boutique how much it was, I didn’t think I could afford it. It was about $18,000, which was a substantial sum of money. The staff told me it was the last piece in Singapore, but I decided to think about it first. After doing more research, I decided to get it. But when I went back a few weeks later, the watch was sold and no other boutique in Asia had any stock!

I then took the search online but there weren’t many people letting it go. Finally I found one on Chrono24 and messaged the seller. However, he told me it was on hold for someone else. Three months later on my birthday, the watch popped up! It turns out the watch was on hold for my boyfriend who got it for me as a birthday gift!

I liked the Grand Seiko Spring Drive Ref. SBGA011 for its Spring Drive movement more than anything else. As an engineer, it intrigues me as it’s not really quartz but not fully mechanical either. It’s also the only movement where the seconds hand sweeps rather than ticks.

There was no real urgency to buy it, though. One day, I saw it on Carousell and asked the seller if I could see the watch. He agreed and was very friendly, explaining that he was letting it go only because his wife lets him keep just three watches at a time!

With the Grand Seiko Hi-Beat 36000 Ref. 6145-8030, I got it from Heirloom Gallery and it was love at first sight. I had actually been saving up for a Lange 1 Moon Phase and this was a distraction from that. I didn’t get the watch on my first visit but actually even dreamt that I did! In fact, for a whole week, I kept asking the shop owner, Shawn, if it was sold. When I finally decided to buy it, I asked him to set it aside and to alert me if another buyer was interested because then I would rush down with a deposit!

I got this at a roadshow by The Hour Glass and it was surprisingly not as expensive as I thought it would be. I was intrigued by the movement because in a typical moonphase watch, the moon moves across a window on a disc, but here, the moonphase window itself moves around the dial. There’s a whole planetary system here too, with a luminescent motif of the sun on the hour hand and the diamond indexes representing stars, while the moving centre is the earth.