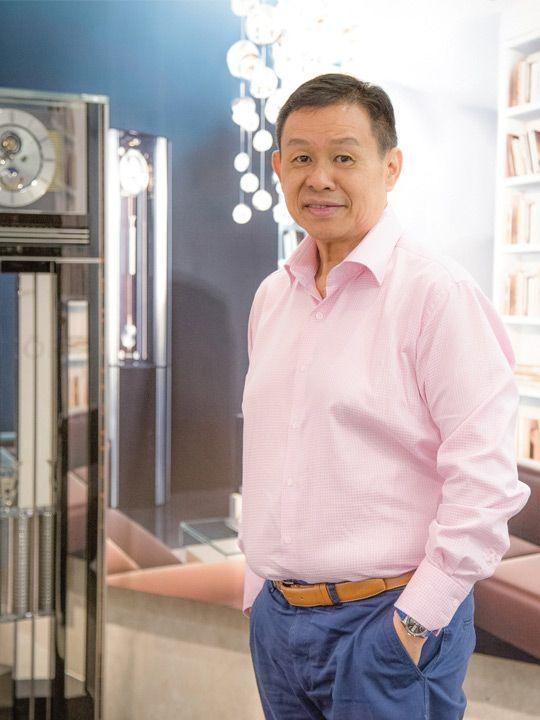 It would be an understatement to say that the watch business courses through Jimmie Tay’s veins. Literally born into the trade, Tay came from a family where his grandfather was the founder of Lee Chay Watch Co., one of Singapore’s oldest watch retailers. “I have always been around watches,” Tay says, and recalls that his fondest memories were of being in his grandfather’s shop when he was in primary school, where he would hang out after class. “I would even help wind up some of the Rolexes in the shop.”

Barring a stint in the airline industry at the start of his career, he has been involved in various aspects of watch retail, from helping out in the family business, to joining The Hour Glass during the mid-1990s, to running his own watch boutique in Brunei in the mid-2000s. Today, Tay is managing director of Tempo Luxe, which distributes and retails luxury watch winders and safes for German brand Buben-Zorweg.

"This is a one-of-a-kind watch that was commissioned by a customer from Bangkok in the 1990s. It fell into my possession after he decided to let it go, and I bought it for myself after being intrigued by its design and attention to detail. It’s a manual-winding piece and has a handcrafted gold case, marquetry-style sapphire crystal, and mother-of-pearl dial. It makes a nice keepsake and I’ve actually never worn it; I've always kept it in the safe."

"The Bruneian royalty used to order watches from The Hour Glass as gifts for their palace employees. You can actually spot the country's national crest on the dial. They would order anything from 500 to 1,000 pieces, and this was from one of those orders. Christian Dior was one of the brands I was overseeing when I was working at The Hour Glass, and I kept this watch as a reminder of the time I was working on those projects."

"This watch is another memento from my time in Brunei. In 2010, there was a silent watch auction held in both Singapore and Brunei, organised for a charity foundation under the auspices of the Crown Prince’s wife. I got involved in the Singapore event with Ulysse Nardin's then-CEO Rolf Schnyder. We created an enamel watch and flew in artisans for the event, which turned out to be a huge success. The late-Schnyder presented me this watch as a token of appreciation, which touched me a lot."

"This is my first and most precious Rolex. My mother had my name engraved on the caseback and gave this to me when I turned 21. What else can you say about a watch like that? This is really an example of how watches are not just tools to tell the time, but objects that hold meaning and memories for their owners."