How Swatch Makes Art Accessible For Everyone

Making ‘art on the wrist' on a scale that haughty luxury marques can only envy. 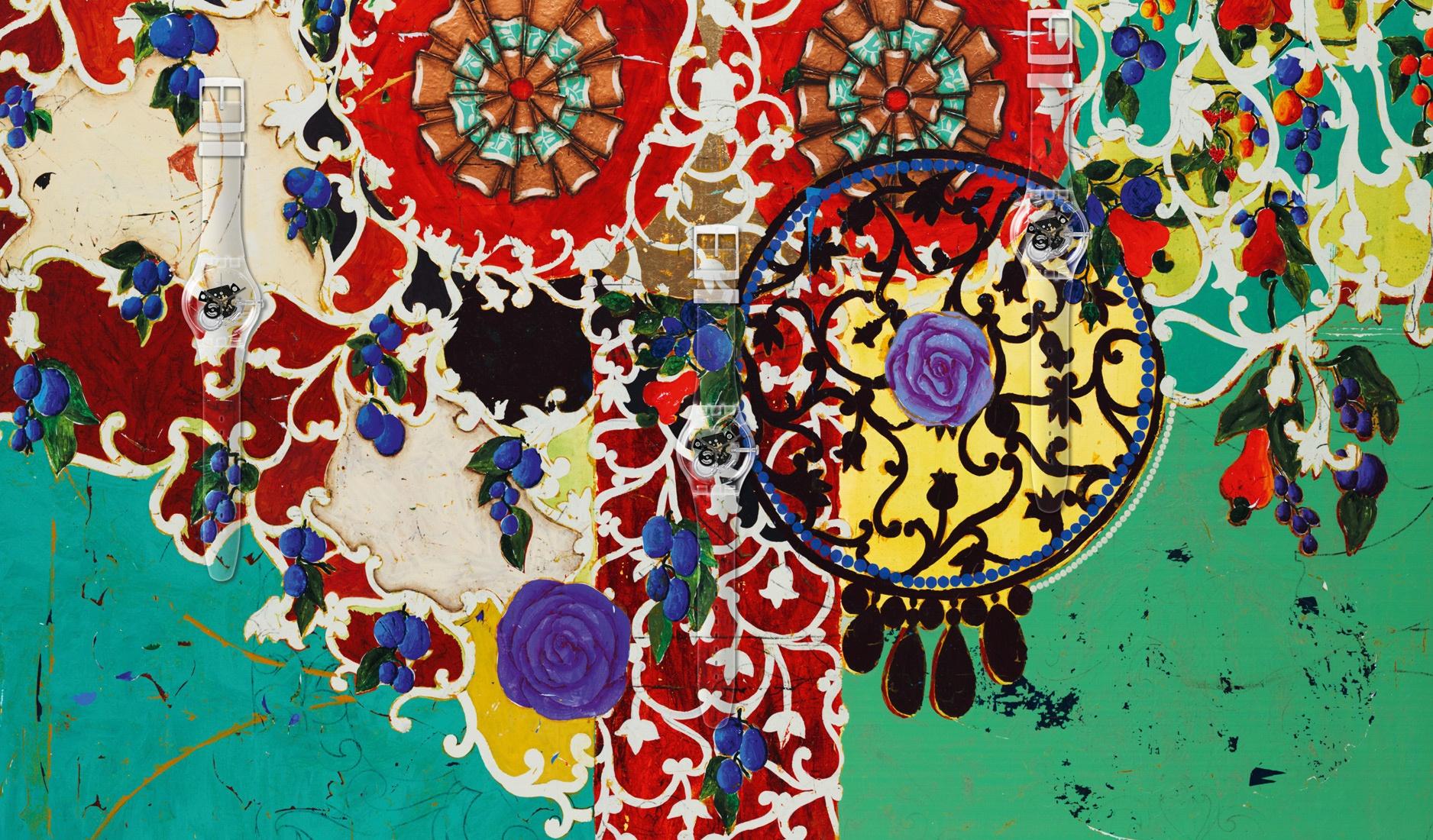 Fancy owning a Van Gogh? Or perhaps something more contemporary from Keith Haring and Damien Hirst? Well, of course, you can. Thanks to Swatch, not only are the works by these stellar artists far less fiscally prohibitive for everyone, they are also, by nature, gratifyingly portable, allowing you to share your tastes and interest in art everywhere you go.

The notion of watches as works of art, while ingrained in horological psyche, has long been a preserve of luxury watchmaking. Lofty marques are wont to extol their watches’ mechanical and decorative beauty, inviting us to ruminate over them, as we would a painting or sculpture. Unfortunately for most, these wrist-bound art pieces are often just as expensive and out-of-reach as those hanging on the walls of art galleries and museums. And in the mid-1980s, when the very existence of centuries-old Swiss watch brands were threatened by the proliferation of cheaper, battery-operated quartz watches from Japan, the watch-as-high-art narrative, while completely justified, did seem a bit out of step with reality.

It was right about that time when Swatch came onto the scene. Launched in 1983 to reignite interest in ‘Swiss-Made’ watches with its brand of inexpensive and colourful quartz watches, Swatch kickstarted a revolution on two fronts. For one, there was the paradigm shift that ‘Swiss Made’ watches could also be affordable and quartz-dominated; a move that helped its parent company - known then as SMH (Société Suisse de Microélectronique et d’Horlogerie) and today as the Swatch Group - recover market share from the then-increasingly dominant products from Seiko and Citizen. Second, a cultural evolution within the Swiss watch business itself, when it ushered a fresh new way of marketing watches by incorporating fashion, pop culture and modern art in branding and promotional efforts.

Utterly Art
In 1985, the brand launched its first ‘Swatch Art Special’ collection. Designed by French artist Kiki Picasso and unveiled at the Georges Pompidou Centre in Paris, the 120-piece collection featured a portrait of the artist’s wife on the dial and came packaged with a poster. At the peak of Swatch’s popularity in the late-1990s, it was reported that a piece would have sold for approximately CHF 60,000. “At the time, we were not aware of the impact we would have as our collections were designed spontaneously. It was the response of the people that created this frenzy, with collectors building up the hype and competing for timepieces, which make them so sought after today. It was not only about limited quantities or selected destinations of distribution,” says Bernardo Tribolet, Swatch’s vice-president of marketing.

This is not to suggest that watch lovers ought to start seeing Swatch Art Specials as quick investment flips (the Kiki Picasso piece did, after all, take time to reach its height of notoriety), but the idea that a plastic watch can also be appreciated as art is certainly seductive. Clearly embracing this, Swatch has since made collaborations with the art world vital to its product strategy. 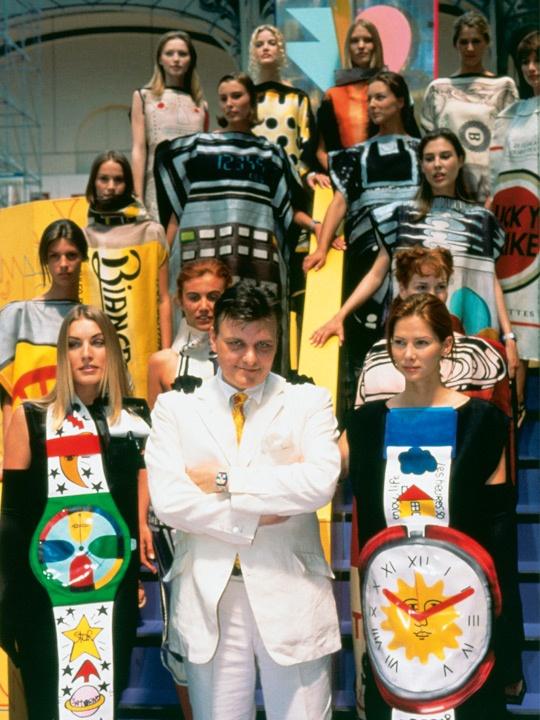 And it cuts both ways, too, as artists started seeing the potential of having “a canvas on the wrist”. Since the first Art Special watch with Kiki Picasso, Swatch has issued exclusive artist collaboration editions almost every year, working with creative minds of every ilk. Painters, graphic designers, illustrators and sculptors from the fields of fine and contemporary art, as well as fashion designers, filmmakers and photographers – both world-renowned and aspiring – were engaged by the brand. 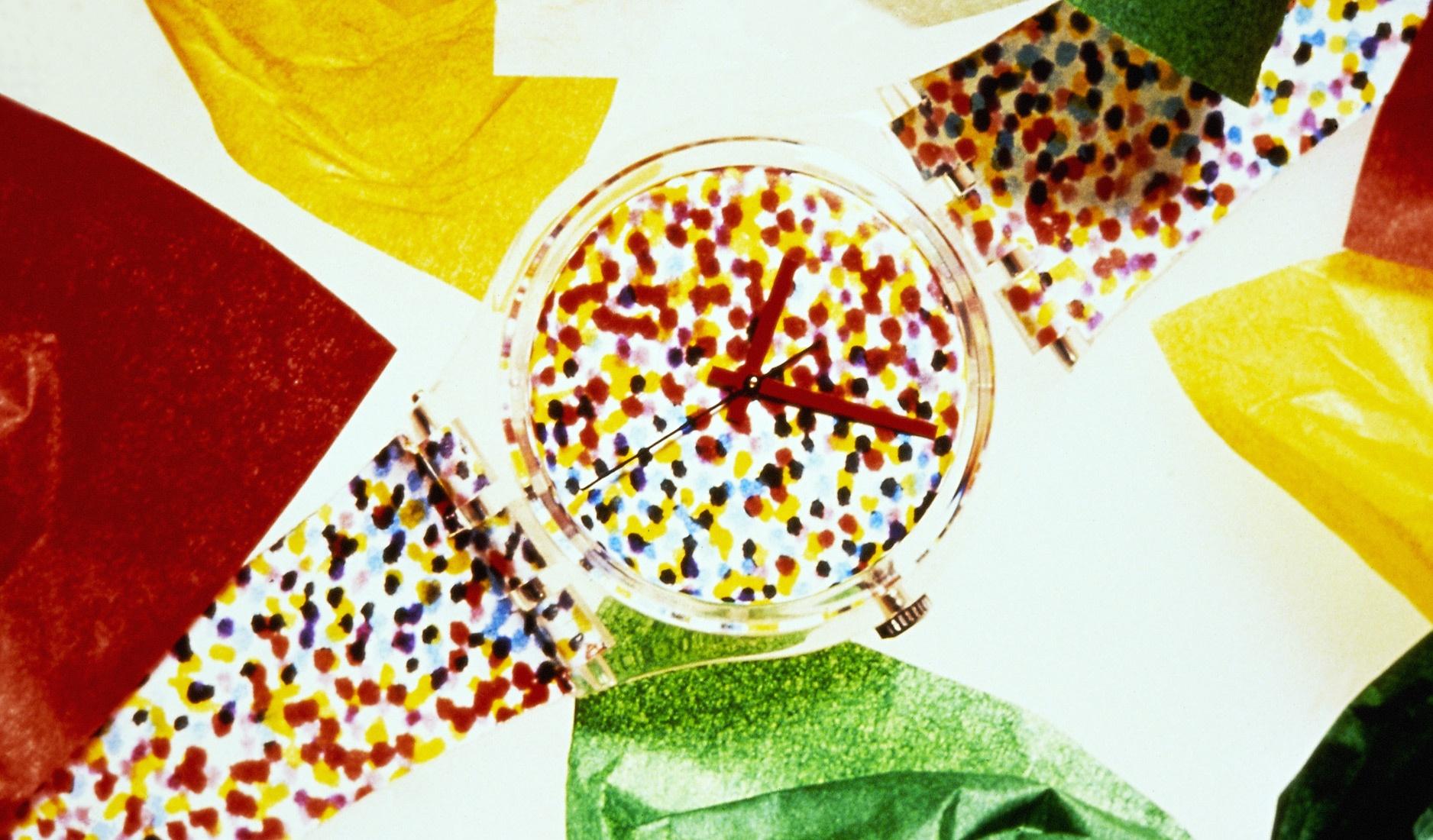 True to the spirit of the collaborations, the results are always inspired and surprising. Limited editions that are now a part of Swatch’s folklore include Alfred Hofkunst’s One More Time series from 1991, featuring food-inspired sculptural watches that look deceptively like a red pepper, or slices of cucumber and bacon; Vivienne Westwood’s wild, accessory-style creations from 1992; and Christian Lacroix’s flamboyant Xmas from 1994 featuring an elastic strap made of cast brass segments and coloured crystals circling the dial. 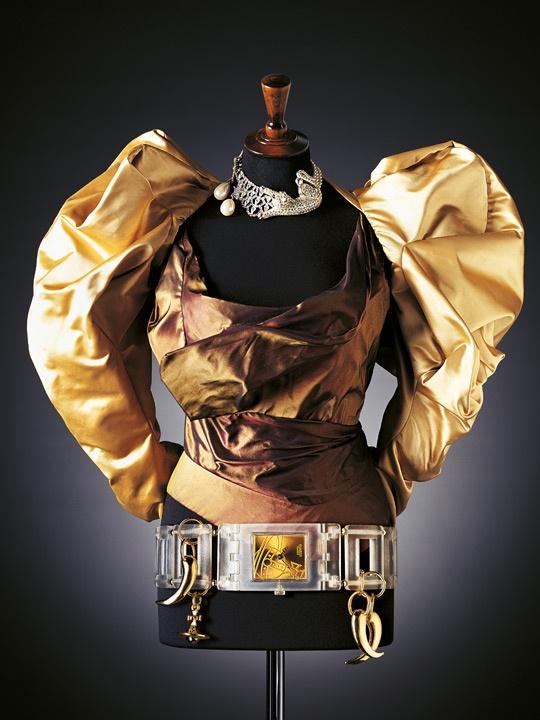 ‘Cocotte’ by Vivienne Westwood from 1992

For its most recent artist collaboration, Swatch commissioned the Keith Haring Studio for a collection of Mickey Mouse-themed tickers, depicting the iconic cartoon character with Haring’s trademark use of vibrant colours, repetitive lines and stylised shapes. This is the second Swatch collaboration with Keith Haring, the first was in 1986, when the artist designed four watches for the opening his Pop Shop in New York.

“Legend has it that the street art pioneer always wanted to work for Disney, and somewhere along the way, he decided to take matters into his own hands with Mickey Mouse featuring as a recurring figure in his work,” says Tribolet. 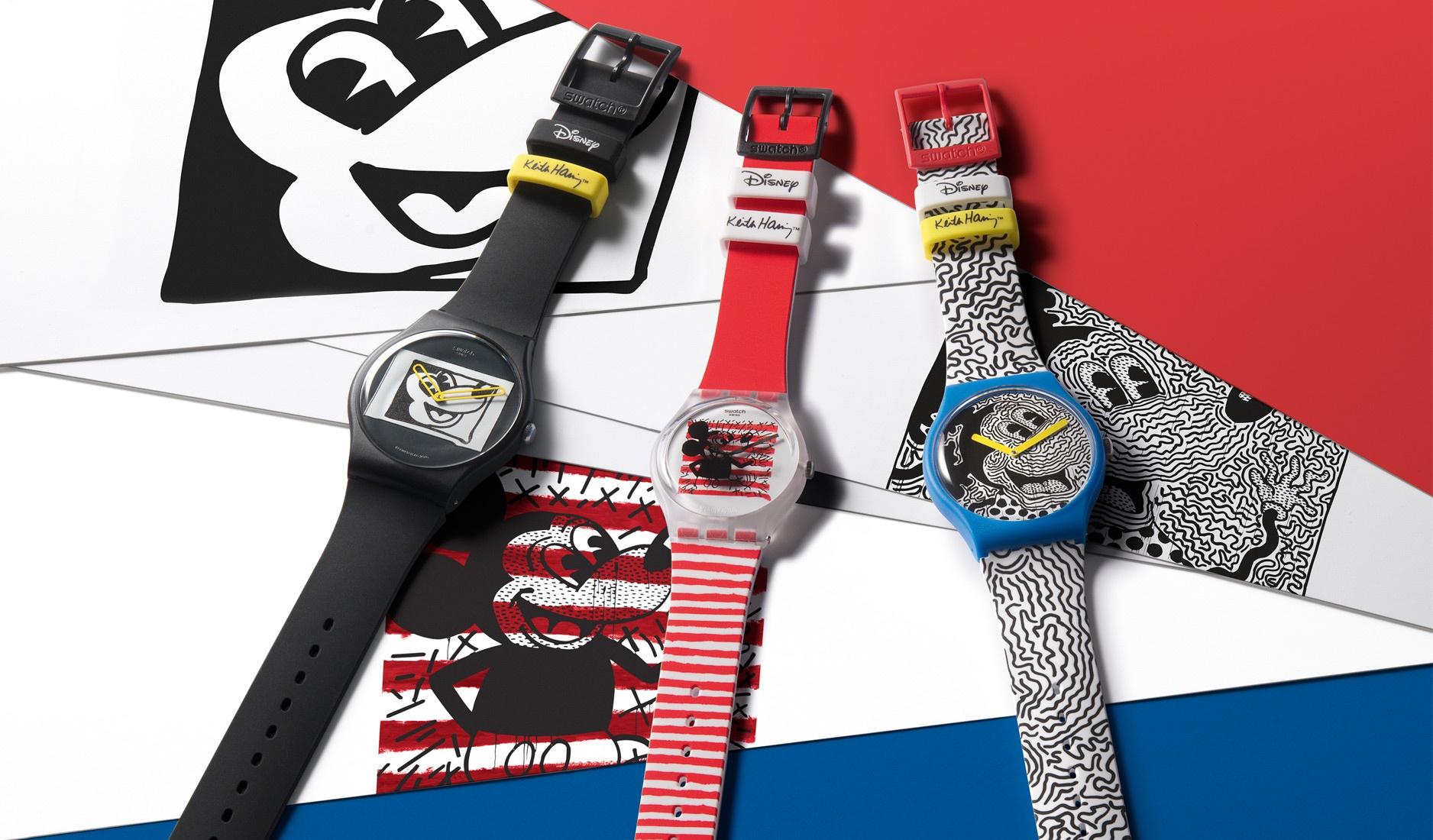 Expansive Canvas
Even as Swatch continues to invite artists of all disciplines to work with, the brand is also expanding its own field and methods of artistic collaborations.

In 2010, its parent company, the Swatch Group, opened the Swatch Art Peace Hotel in Shanghai. Formerly known as Peace Hotel, the iconic 113-year-old building was transformed into a multipurpose venue for art exhibitions and watch retail alongside luxury accommodation. Meantime, Swatch also started to work with world renowned museums like the Rijks Amsterdam and Thyssen Madrid in 2018, the Musée du Louvre Paris in 2019, and, most recently, New York’s Museum of Modern Art (MoMA) to reinterpret the world’s most famous works of art with its ‘Museum Journey’ series of watches. 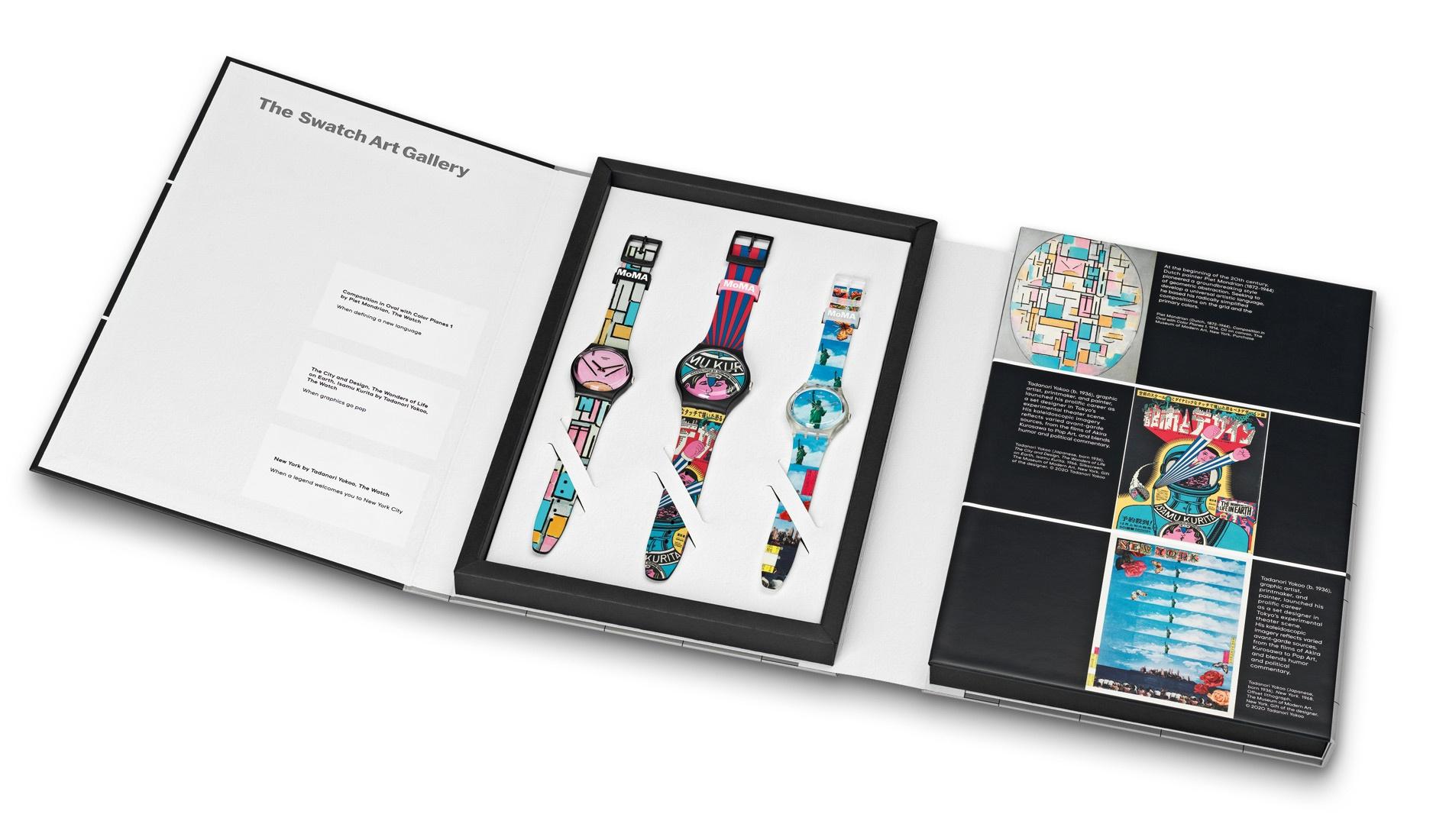 “Bringing art out of the museum to the people remains extremely appealing for us today,” says Tribolet.

The latest partnership with MoMA sees Swatch transposing the some of the most recognised artworks in the museum’s collection on a series of six watches. They include The Starry Night (1889) by Vincent van Gogh, Hope, II (1907-1908) by Gustav Klimt, The Dream (1910) by Henri Rousseau, Composition in Oval with Color Planes 1 (1914) by Piet Mondrian, The City and Design, The Wonders of Life on Earth, Isamu Kurita (1966) by Tadanori Yokoo, and New York (1968) also by Tadanori Yokoo. 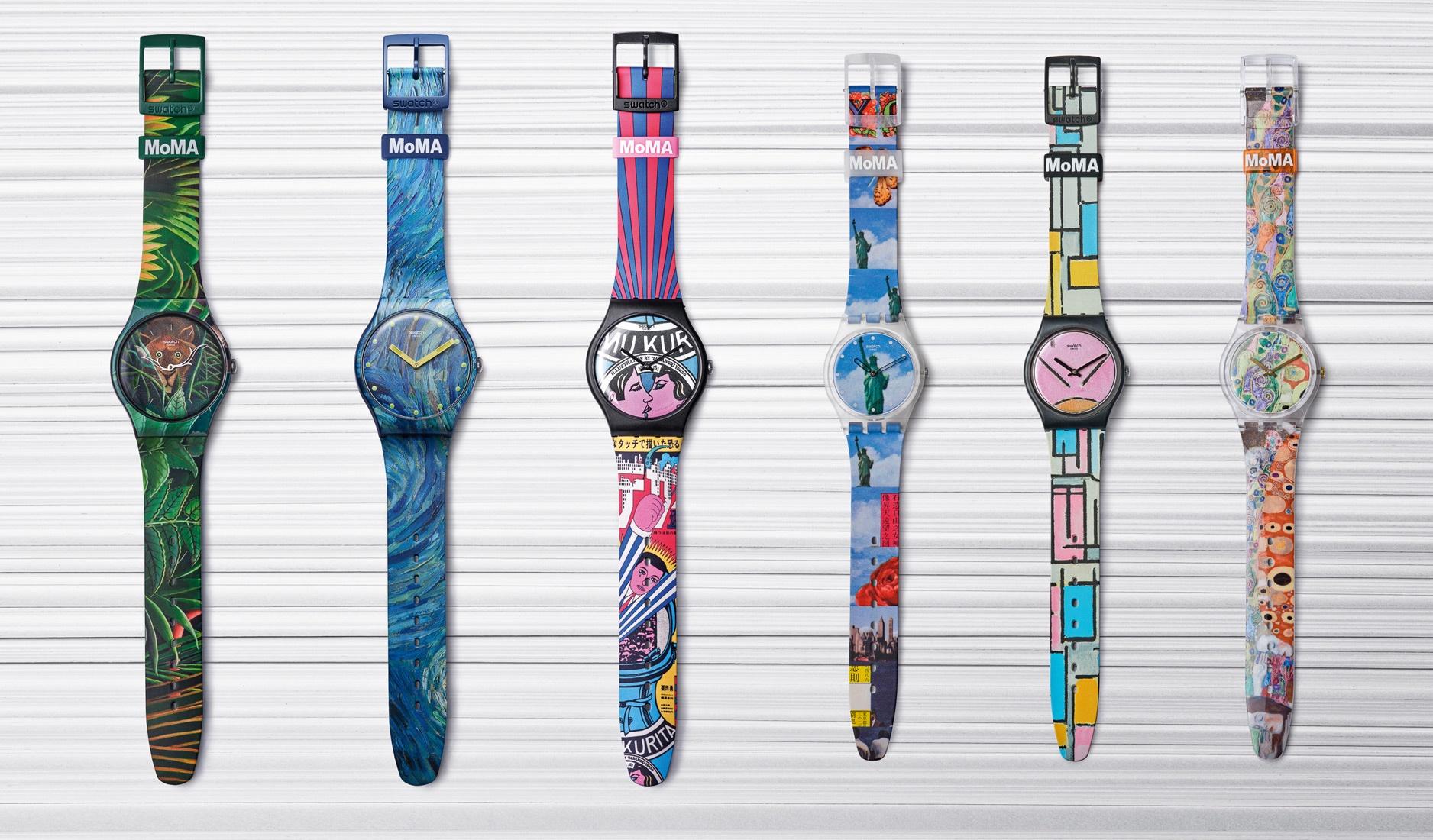 Collection of six watches from the Swatch x MoMA 2020 edition

The collaboration between Swatch and MoMA has come full circle. In the 1990s, MoMA acquired three Swatch watches as part of the museum’s permanent collection: the GB100, from the brand’s inaugural collection from 1983; the GK100 Jelly Fish, created by artist Andrew Logan from 1985; and SFK100 Jelly Skin from 1998. To the then-fledging watch brand that desired to connect with the world of art, MoMA’s decision was a strong validation that Swatch was doing something right. “It was like a stamp of honour,” says Tribolet. 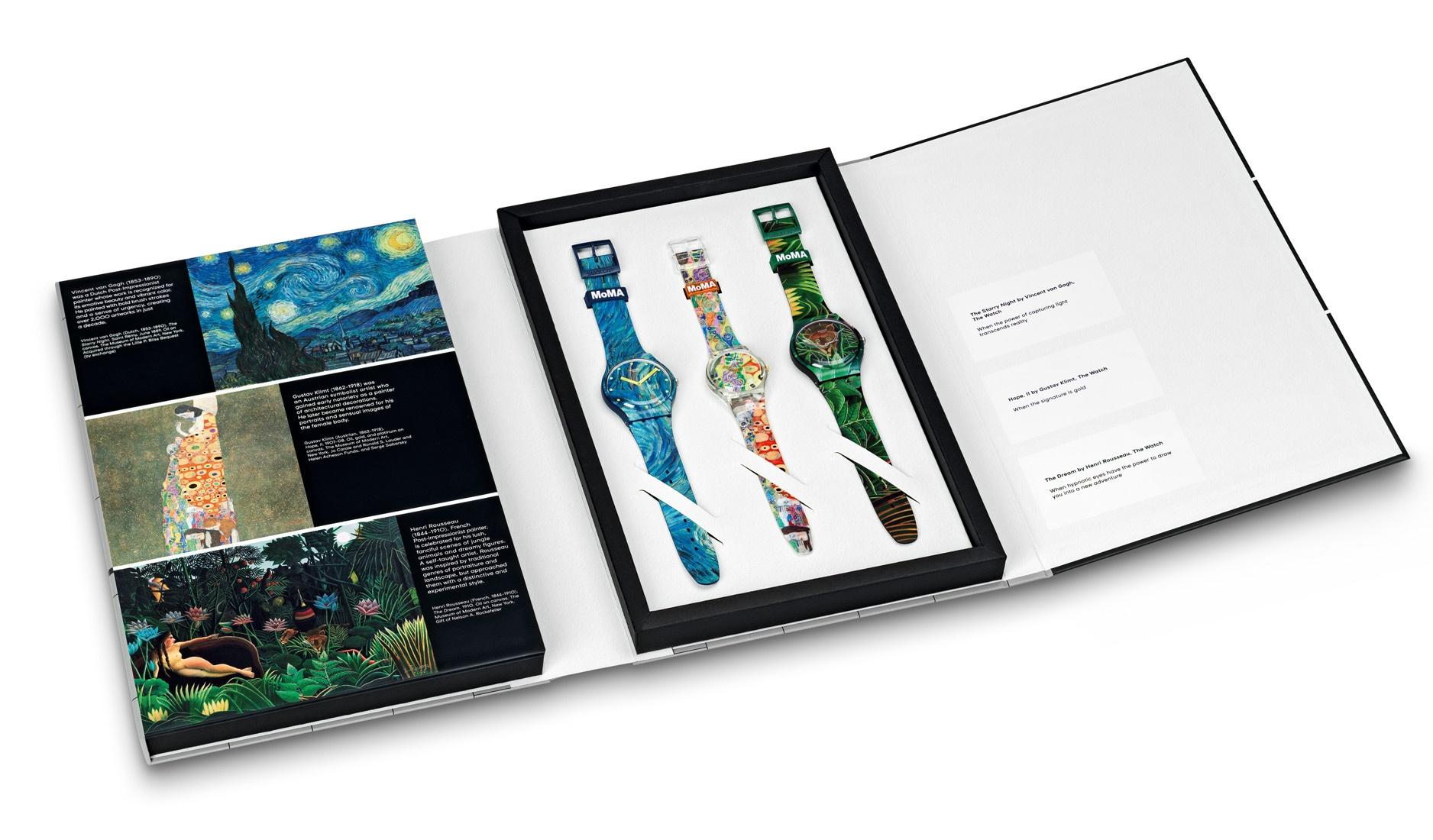 Decades on, Swatch’s stunning track record with artists and art establishments is unparalleled. To think that a range of low-cost plastic watches could be elevated as a conduit for art, while inspiring the same joys of discovery as intended by artists with their original works is a magical thing. “It is about the emotional connection. (The watch) makes you smile or it doesn’t. You connect with it or you don’t. No explanation required,” says Tribolet. He could well have been talking about art.