Because we #supportlocal in many ways.

Every August, patriotic locals break out their red and white outfits to celebrate the nation’s birthday. But while it’s de rigueur to colour co-ordinate with the national flag, we don’t necessarily want the same tones on our wrists. So if you’d rather not blend into a sea of scarlet, here are some timepieces you can wear instead to channel your national pride. In honour of Singapore’s bicentenary, Omega introduced a timepiece that, while minimalist on the dial side, is etched with significance on the reverse. A sapphire caseback reveals engravings of the Singapore Flyer, Esplanade, ArtScience Museum and Raffles Hotel, amongst other iconic Singapore landmarks. Powering it is the equally impressive METAS-certified Master Chronometer Calibre 8800, with a power reserve of 55 hours. Needless to say, the watch is limited to just 200 pieces and only available in Singapore, so feel free to unleash your inner kiasu Singaporean and make a beeline for the boutiques. Or read more about it here.

Price: S$10,500 at Omega boutiques in Singapore only Jumping on the bicentennial bandwagon is the American watch company famed for its railroad watches. Inspired by the Singapore flag, the Roadmaster Raffles features a red bezel—a first for the brand—as well as green gas tubes with exceptional brightness to offer legibility when you’re watching the parade at night. As a railroad watch, you can expect the Roadmaster Raffles to be anti-magnetic. Flip to the back to view the Calibre RR1102 with 38 hours of power reserve, as well as an image of Singapore’s founder, Sir Stamford Raffles on the caseback. Limited to 200 numbered pieces. 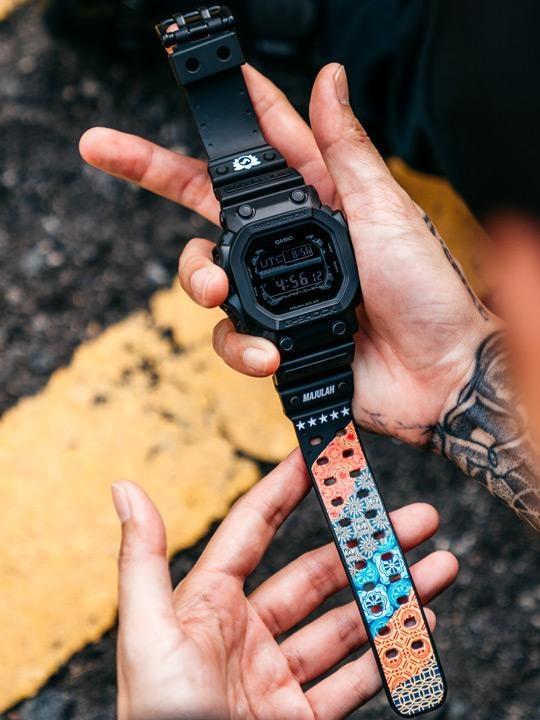 Known for its street cred, Casio G-SHOCK has teamed up with Singapore’s very own Sticker Lady, street artist Sam Lo, for a 300-piece limited edition watch. For this collaboration, the black GX-56BB gets sheathed in a mix of colours and patterns like camera lenses and lucky coins. The word ‘Majulah’ (Malay for ‘onward’) is emblazoned across the width of the strap, with five stars below it. Lo says the objective was to “highlight modern day cultural elements by marrying the familiar with the traditional on a watch designed to be as resilient as the people who march forward and make Singapore unique.” Majulah, then. 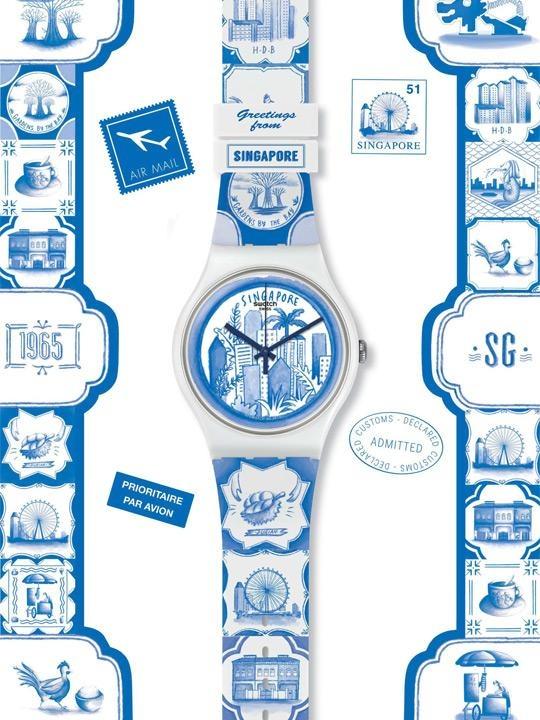 Designed to look like blue and white Peranakan tiles from the 1970s, the Swatch Singapore Tale could pass off as a postcard in wristwatch form. Apart from loops on the strap which say ‘Greetings from Singapore’, local artist Tan Zi Xi (or Messymsxi, as she’s known on IG) takes the wearer on a trip around Singapore with renderings of the Merlion, Gardens By The Bay, and more. But there are also more heartwarming pictures that offer a peek into the lives of Singaporeans. These include traditional ice cream carts, HDB flats, a kopi cup, as well as the famous ‘dragon playground’. Hold this one close to your heart while belting out Kit Chan's Home.

Okay first up, you’re not going to get this watch in time for National Day. But we had to put this in here anyway because we love local microbrands, and Humism is one of those we’re excited to see more from. Viewing the wristwatch as more than just a time-telling device, designer and founder David Tze envisions it as a work of art; specifically, kinetic art. We’re particularly enthralled by one of their new designs, Kato, from the Philosophies collection, with its mesmerising dial movements that bring fun back into design. Hit them up on Kickstarter to see more from the brand and tell us it doesn’t inspire some local pride.